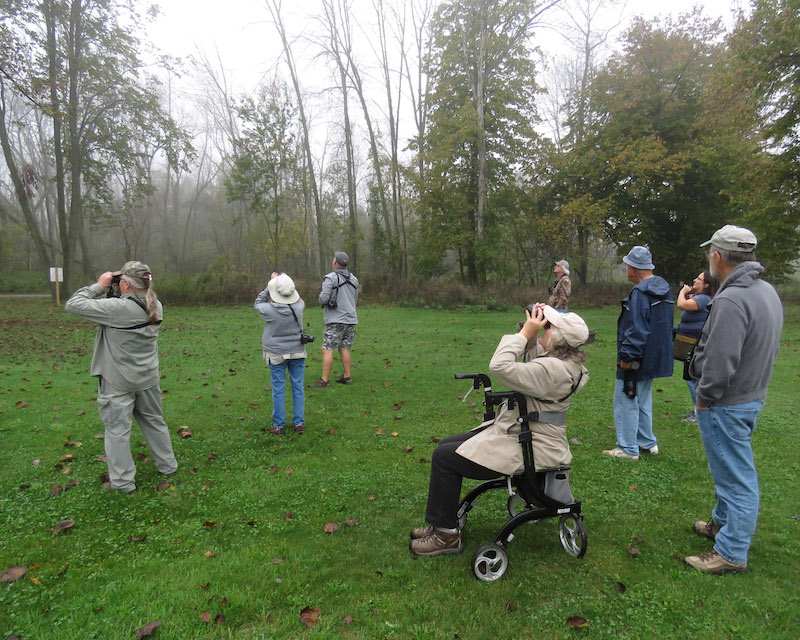 By Tom Schultz and Adam Knueppel 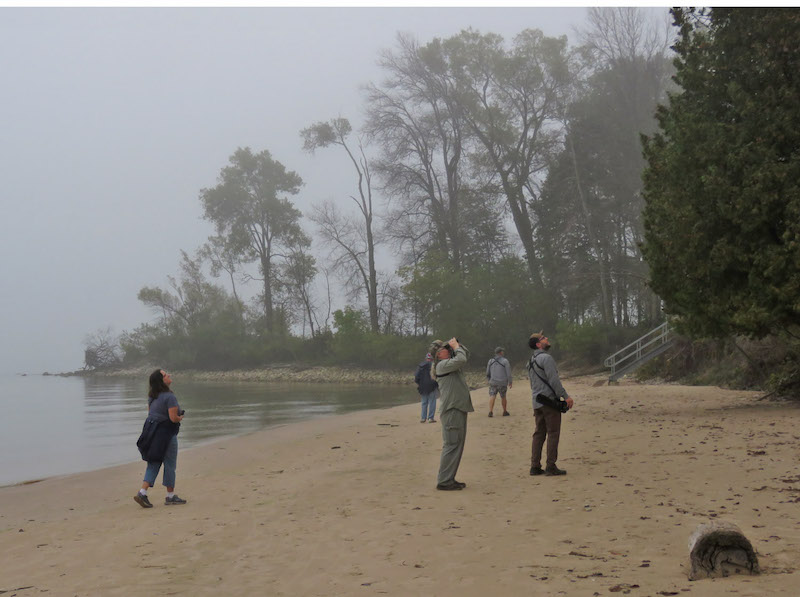 Sunday, October 3rd was the planned field trip date for our WSO Hawk Watch at Harrington Beach State Park (Ozaukee Co.), but unfortunately the weather was that morning not very conducive.  About 12 people showed up at 8:00 AM, but there were nearly continuous rain showers.  The wet weather, in combination with frequent lightning, made us decide to cancel the outing -- postponing it to the following Saturday.

Everyone soon left, and Tom Schultz headed in to nearby Belgium for a stop at a gas station.  He spent some time checking eBird reports on his phone, thinking about where he might stop on the way home, but soon the rain let up and the sky started to brighten a bit, so he thought he might as well head back to Harrington Beach State Park.  He walked around a bit and discovered that there were actually quite a few birds present, and by the time he left (nearly 2 hours) he'd found 15 species of warblers!  Highlight birds that morning included Yellow-throated Vireo, Gray-cheeked Thrush, Northern Parula and Orange-crowned and Bay-breasted Warblers, Northern Waterthrush, and an “Oregon” Junco.

The postponement date was set for the following Saturday, October 9, and an email was sent to all the participants… 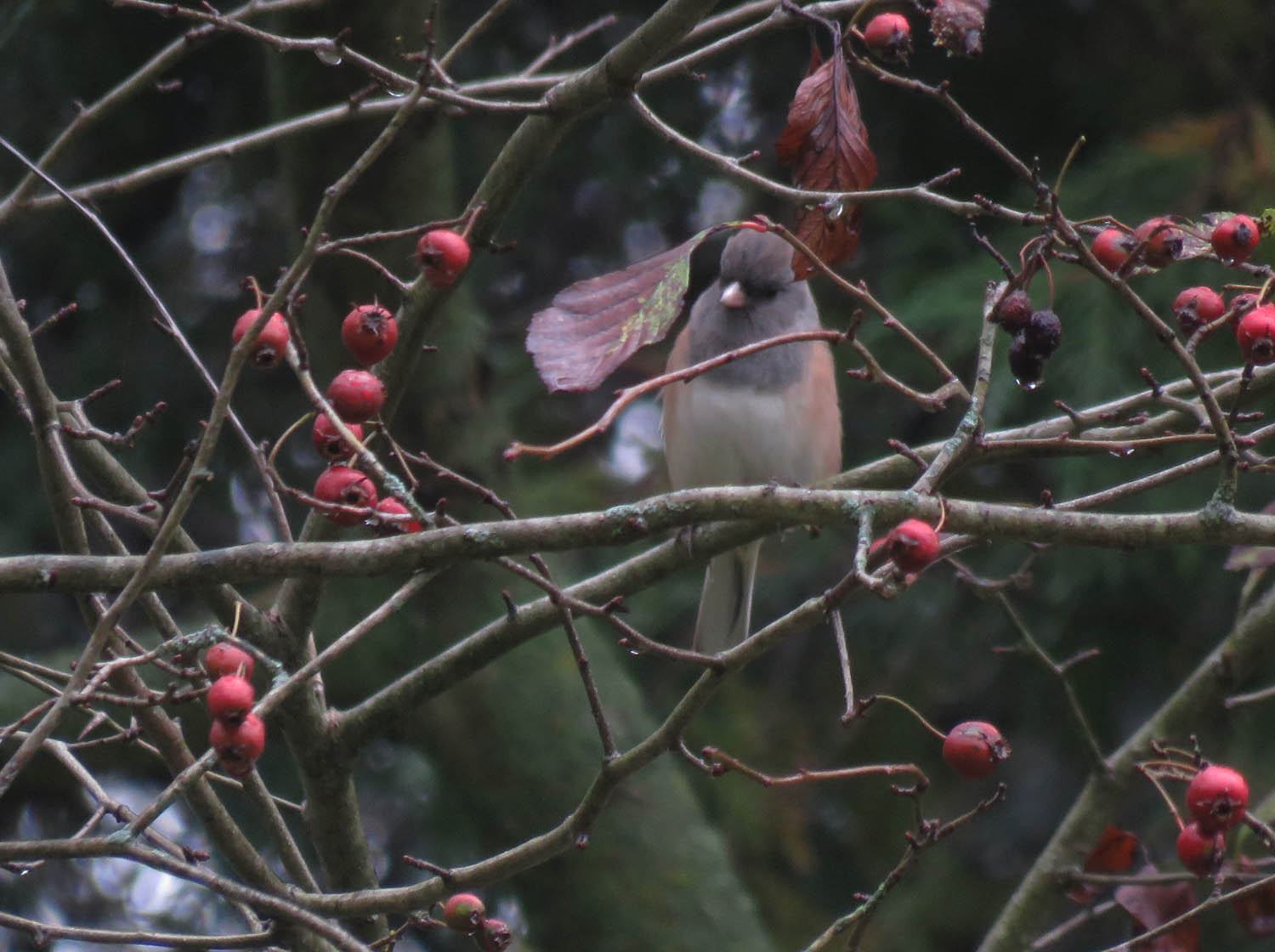 On Saturday, October 9, a group of twelve met at Harrington Beach State Park around 8:00 am. Temperatures were in the lower 60’s, with significant fog, and cloudy skies.  While we were gathering, Golden-crowned and Ruby-crowned Kinglets were busy in the treetops overhead.

For our first stop, we headed towards the beach to see what sort of visibility there might be on the water.  On our way, we spotted a Merlin zip along the shoreline just inside the tree cover.  A Swainson’s Thrush gave a brief look as well.  Reaching the water, visibility was poor, but some Herring and Ring-billed Gulls were observed on the water’s edge. A handful of Double-crested Cormorant flew above the water a short distance from shore. A Hairy Woodpecker was cooperative, but the shoreline was pretty slow.

We headed “inland” and pretty quickly had some activity up in the treetops. Yellow-rumped, Black-throated Green, Blackpoll, Palm, and Tennessee Warblers were feeding overhead.  A couple Brown Creepers and Red-bellied Woodpeckers were also found. We thought we heard a Northern Waterthrush call and shortly after, it appeared and some were able to get a few good looks.

Turning our attention lower to the ground, we had a number of Sparrow species moving about. White-throated, White-crowned, Swamp, and Song Sparrows were active in the undergrowth. A female or first winter Rose-breasted Grosbeak was briefly spotted and a House Wren chattered and moved amongst the sparrows. A flock of about forty American Golden-Plover flew overhead for a nice surprise.

As we headed back towards our vehicles a two Red-breasted Nuthatch were heard in some conifers. Another flock of warblers moved through and while they were primarily Yellow-rumped, a few Black-throated Green and a pleasant surprise of two Northern Parula were amongst the flock. We followed the Parulas towards the parking lot, and although high in the tree tops, the two of them perched next to each other and sat still long enough to get a good look. After the excitement of the last warbler flock, we turned around and a juvenile Peregrine Falcon was perched across the parking lot and we were able to observe it quite well.

Now that the fog had cleared up, we decided to head up to Puckett’s Pond to get a little better vantage point and maybe see some Hawks migrating. We did have a Cooper’s Hawk, but otherwise not a whole lot was happening. Some flocks of Red-winged Blackbirds and European Starlings passed overhead. We also added an Eastern Towhee, Killdeer, and a Great Blue Heron to our list. 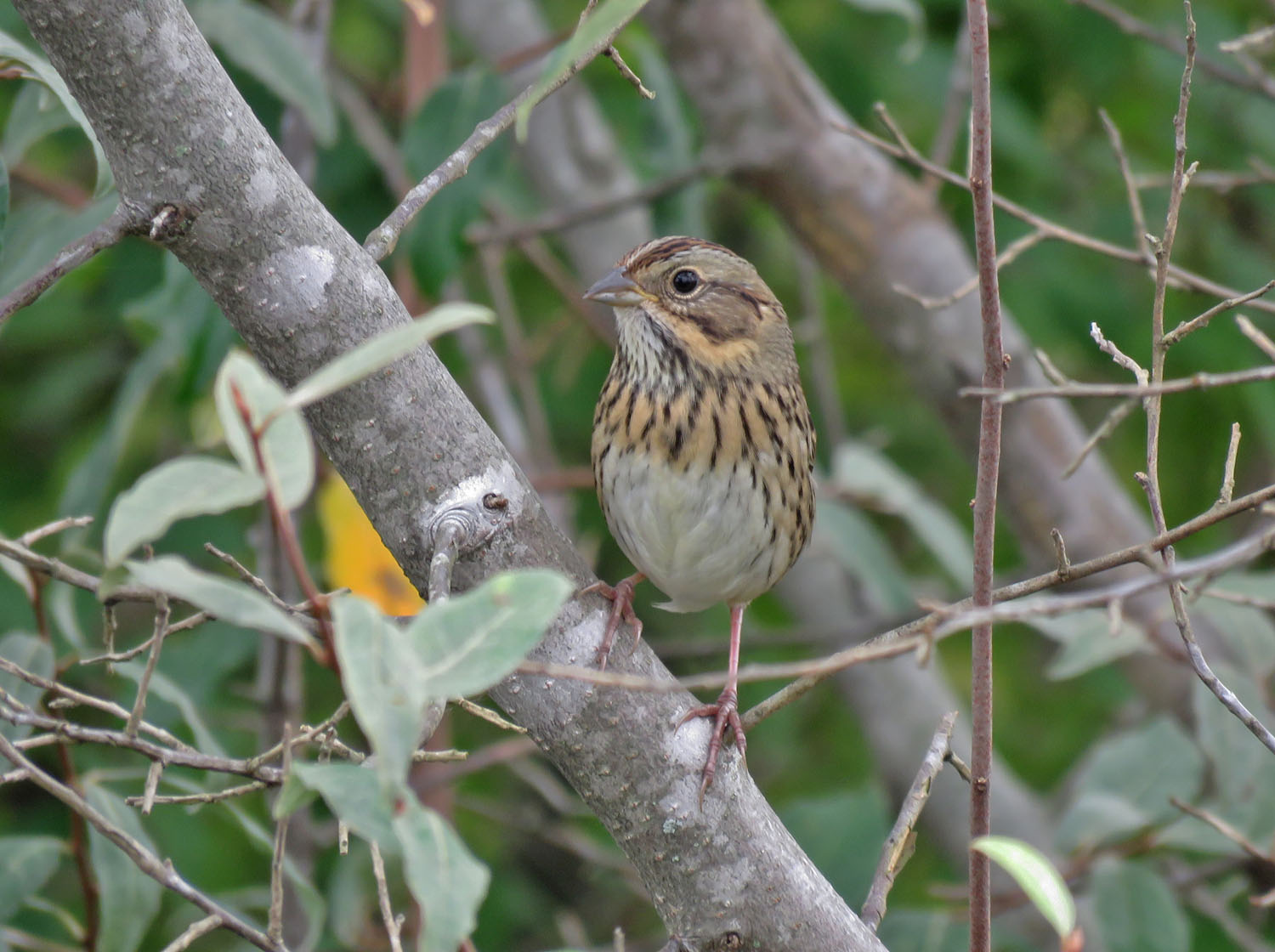 Forest Beach Migratory Preserve was having their big sit so we headed a little south to pay them a visit. We added a flock of Wild Turkey, Dark-eyed Junco, Lincoln’s Sparrow, Field Sparrow, and Brown Thrasher on our walk to the viewing platform.  At the viewing platform we had a couple flocks of Blue Jays and seven Sharp-shinned Hawks migrating overhead. We wrapped up our trip and the 2021 field trips at around 12:30 pm. I was happy that we were able to reschedule this trip and that some were able to make the reschedule! Thanks for a fantastic year and the pleasure of meeting so many new folks. It has been a joy birding together and forming new friendships. In the words of Daryl Tessen, “Good Birding!”