Day One: Friday, September 20 brought fog to Wisconsin Point and the surrounding area, as birders began arriving around 6:30 AM. It wasn’t quite pea-soup, but it did limit visibility over Lake Superior to about 50-200 yards, making it very difficult to find anything but the RING-BILLED and HERRING GULLS that usually come in while we’re present, looking for handouts. 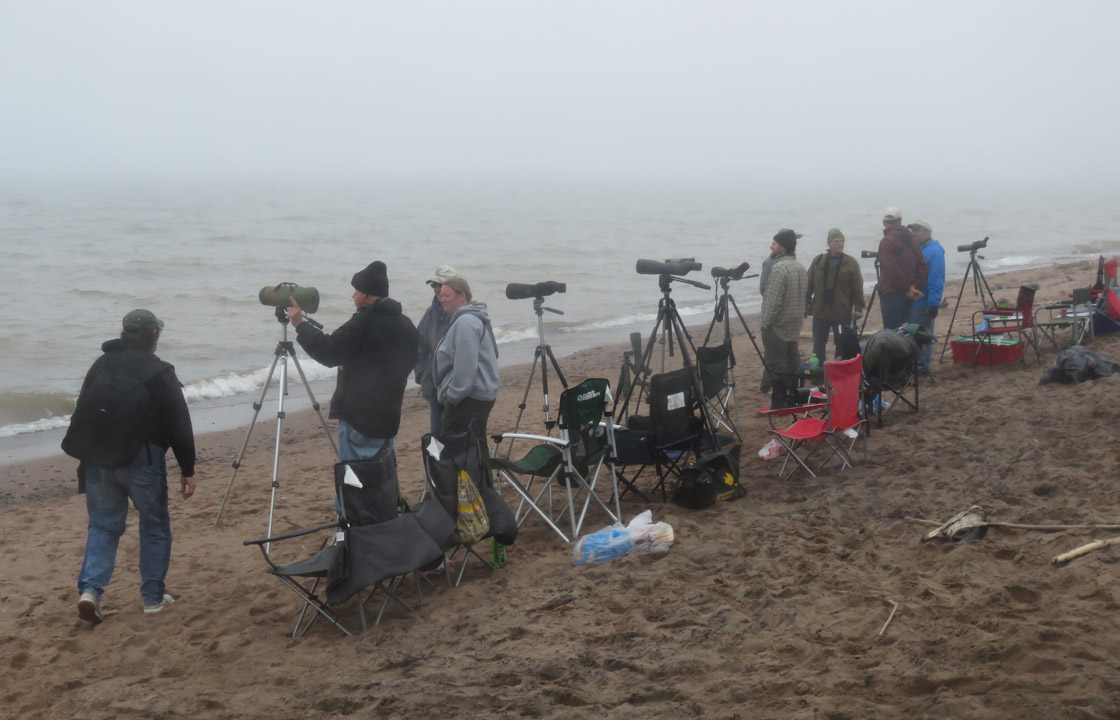 Birders looking out over Lake Superior through the thick fog. Photo taken by Tom Schultz.

We were hoping that the fog would lift by mid-morning, but the Point continued to be socked in – so most of the birders present spent a fair amount of time walking along the road to look for passerines. Fortunately, there was a decent movement of warblers in the trees and bushes, including many dozens of YELLOW-RUMPS and PALMS. It turned out that the group tallied a very respectable 20 species of warblers for the day, including ORANGE-CROWNED, CAPE MAY, BAY-BREASTED, BLACKBURNIAN, and WILSON’S. 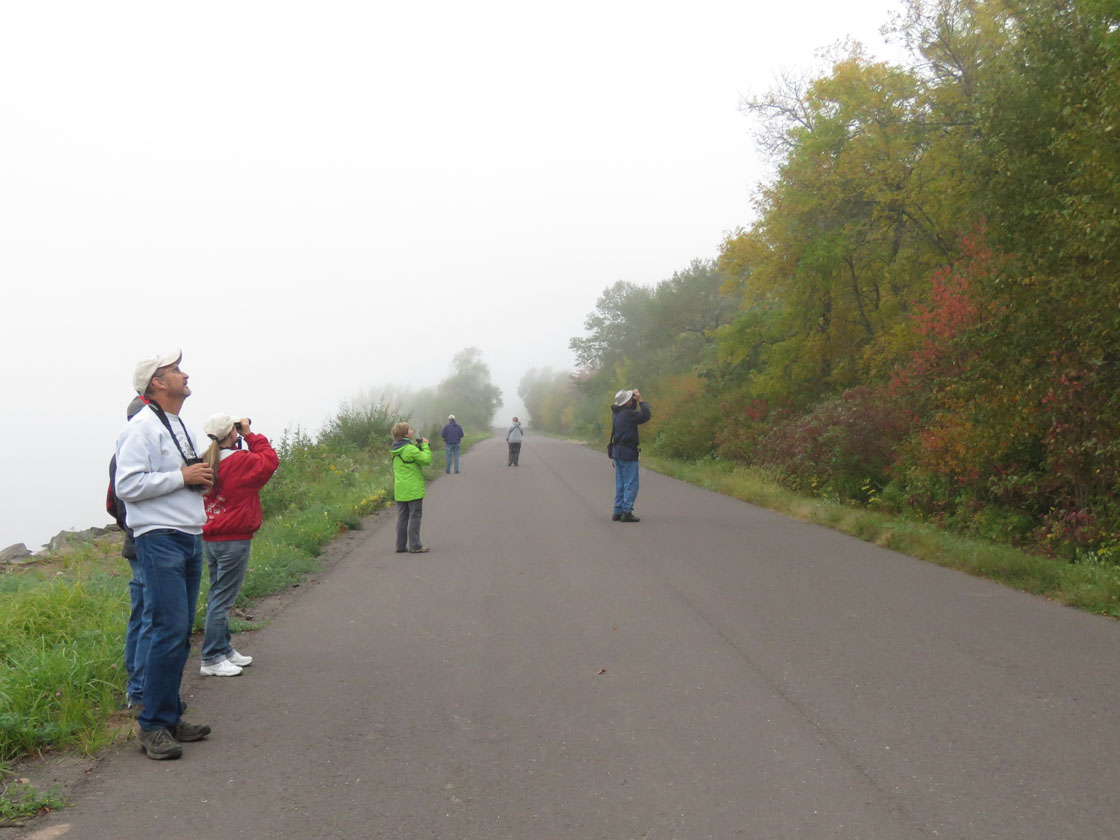 Despite the fog, the group enjoyed birding along the road. Photo taken by Tom Schultz.

Several sparrows were observed along the Point in various places, including SAVANNAH, SWAMP, LINCOLN’S, WHITE-THROATED, WHITE-CROWNED, CLAY-COLORED, and a lone DARK-EYED JUNCO. Other passerines included LEAST FLYCATCHER and EASTERN PHOEBE, BLUE-HEADED and PHILADELPHIA VIREOS, GOLDEN-CROWNED and RUBY-CROWNED KINGLETS, BROWN CREEPER, both NUTHATCHES, and CEDAR WAXWING. YELLOW-BELLIED SAPSUCKERS, BELTED KINGFISHERS and a lone TRUMPETER SWAN were also present, with the only shorebirds being SPOTTED SANDPIPER and WILSON’S SNIPE – with just one of each. 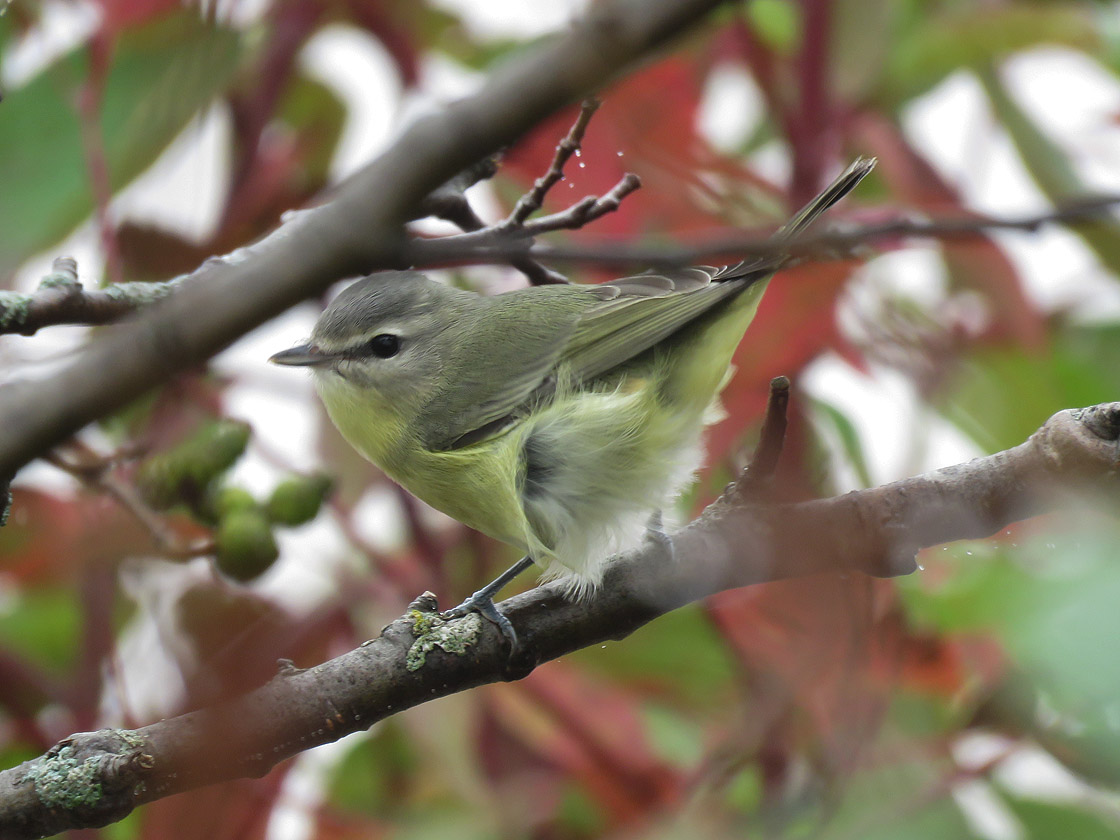 Participants were pleased to observe a nice number of falcons along the road, including multiple PEREGRINES, MERLINS, and AMERICAN KESTRELS. As usual, quite a few BALD EAGLES were also present – birds of various ages.

One of many Merlins seen along the road. Photo taken by Tom Schultz.

As mentioned earlier, the fog over the lake never lifted, so we ended up finding NO jaegers on this first day of Jaegerfest. The variety of waterbirds was quite limited, due to the fog, but the group ended up with about 75 species sighted during the day. The temperatures hadn’t moved much under the cloudy skies, ranging from about 54 to 56 degrees. Most birders left the Point by about 4:30 PM, hoping for better weather to come.

Day Two: Saturday, September 21 also started with cloudy skies and fairly foggy conditions, although the visibility was fortunately somewhat better than it had been the day before. The temperature at dawn was about 54 degrees, with a southeast breeze. RING-BILLED GULLS started to appear by about 6:40, along with several BALD EAGLES occasionally flying overhead. A female AMERICAN WIGEON was spotted among the gulls swimming offshore a little after 7:00.

Shortly after 8:00 a juvenile LESSER BLACK-BACKED GULL was spotted swimming among the other gulls, followed a little while later by a second individual! They were somewhat larger, with a slightly heavier bill than the RING-BILLS, but smaller than the few juvenile HERRINGS that were present. When the birds would occasionally fly about, we were able to observe the all-dark primaries and secondaries. These two were present for most of the day, allowing us to study them closely and repeatedly, with good comparisons to the other gull species. 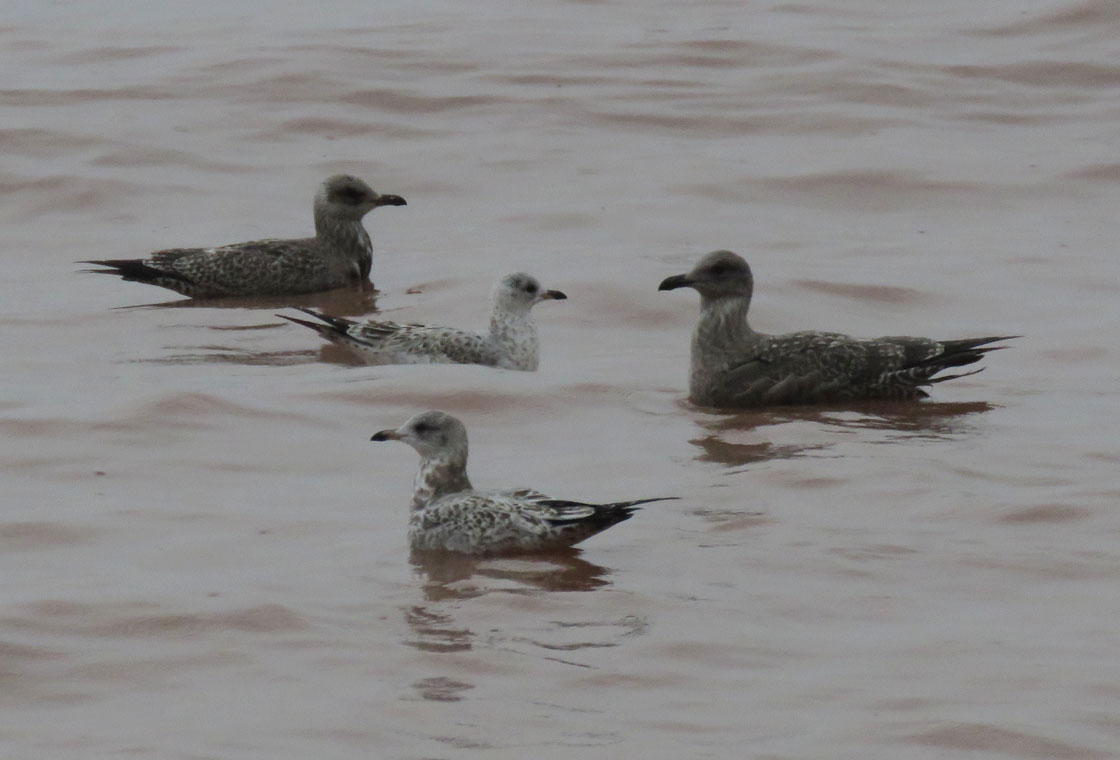 At 8:37 we rejoiced as we spotted our first PARASITIC JAEGER of the day (and for 2019 Jaegerfest), a pale adult or sub-adult, flying east of us – soon reaching Gull Bluff, and then continuing south over the trees. A pair of WOOD DUCKS and a TRUMPETER SWAN were observed on Allouez Bay.

At 10:12 we were pleased to spot another PARASITIC JAEGER flying well offshore but soon noticed two others also flying close by – so we suddenly had THREE in view at the same time. All of them appeared to be pale sub-adults. A short time later, we had a great look at one of the jaegers as it flew past at a reasonably-close distance. 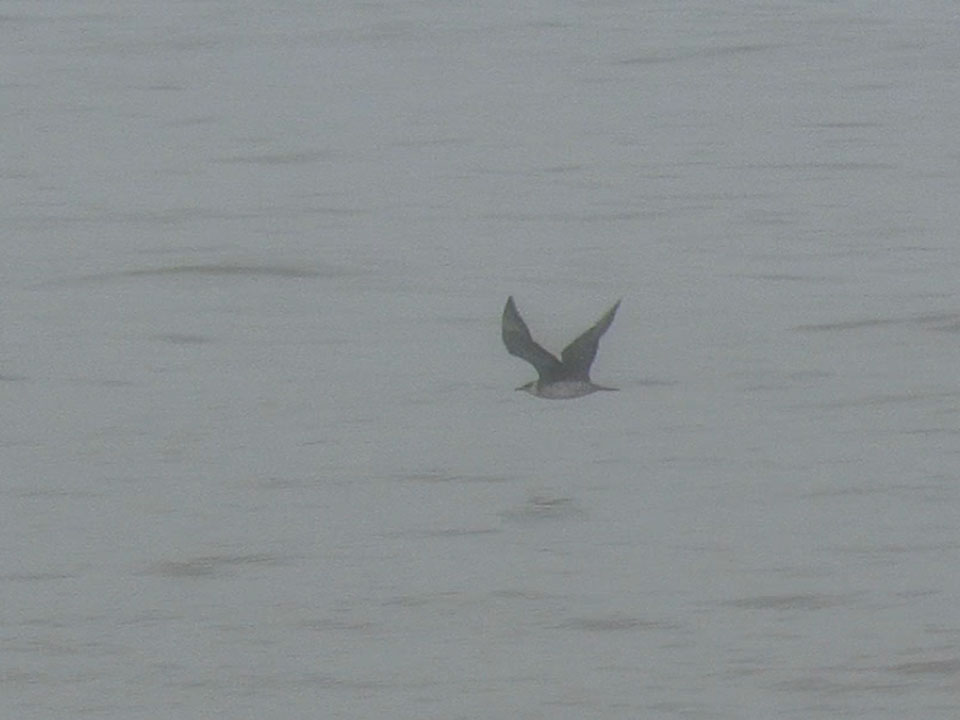 One of a few Parasitc Jaegers seen on Saturday. Photo taken by Tom Schultz.

Unfortunately, the fog turned into a light drizzle, followed by rain showers moving through about 9:15 and 11:40 AM. The latter shower lasted most of an hour, with occasional lightning and moderate rain, and we waited in our cars for it to pass.

After the showers ended we returned to the beach to continue our vigil. Initially, the activity was fairly slow, as the clouds were starting to thin a bit. At one point we could see rain showers build up and move in between us and Duluth, but fortunately, they didn’t come in our direction.

Another PARASITIC JAEGER flew past around 1:26, working east – and about 10 minutes later we were able to spot three jaegers flying together, perhaps a half-mile or more out, and we watched them land on the water for a time. Eventually, they took off and disappeared in the distance.

The rest of the day was fairly uneventful, as the sky continued to clear, and blue skies and sunshine returned. The temperature rose up to around 73 degrees, with a light SE breeze. Some in the group birded out along the Point, but the migrant activity was much slower than on previous days. We wrapped it up around 4:00 PM. Our attendance today probably reached well into the 40s, but not everyone was there at the same time, so it was hard to get a firm count.

Day Three: Sunday, September 22 had thin clouds present at dawn, especially to the east of us, and the red sunrise lit them up beautifully. The temperature was in the upper 50’s as birders began gathering a little before 6:30 AM, and the winds were light to moderate out of the west.

As usual, RING-BILLED GULLS were among the earliest arrivals, with a few flying over, and then starting to gather on the water in front of us. BALD EAGLES also made their traditional early morning flyovers. A RING-NECKED DUCK and a BLUE-WINGED TEAL made a pass in front of us just before 7:00, followed by a couple of NORTHERN PINTAILS a couple of minutes later. Also spotted not far offshore were a couple of Horned Grebes, followed by a third one a short time later. 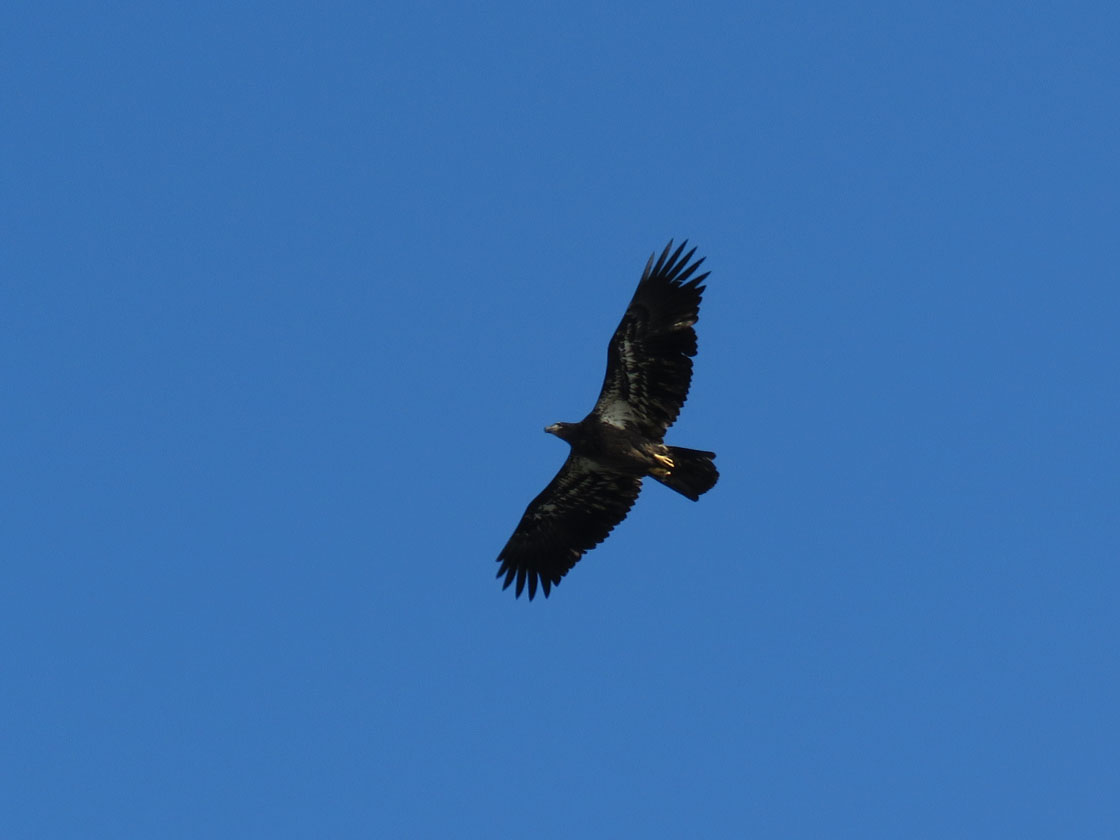 The first PARASITIC JAEGER of the day was spotted just after 8:30, in the same view as a group of four COMMON TERNS that were winging past. This was a different individual than the ones we observed yesterday, with somewhat darker coloration on the underparts – and appeared to be an intermediate-plumaged sub-adult. 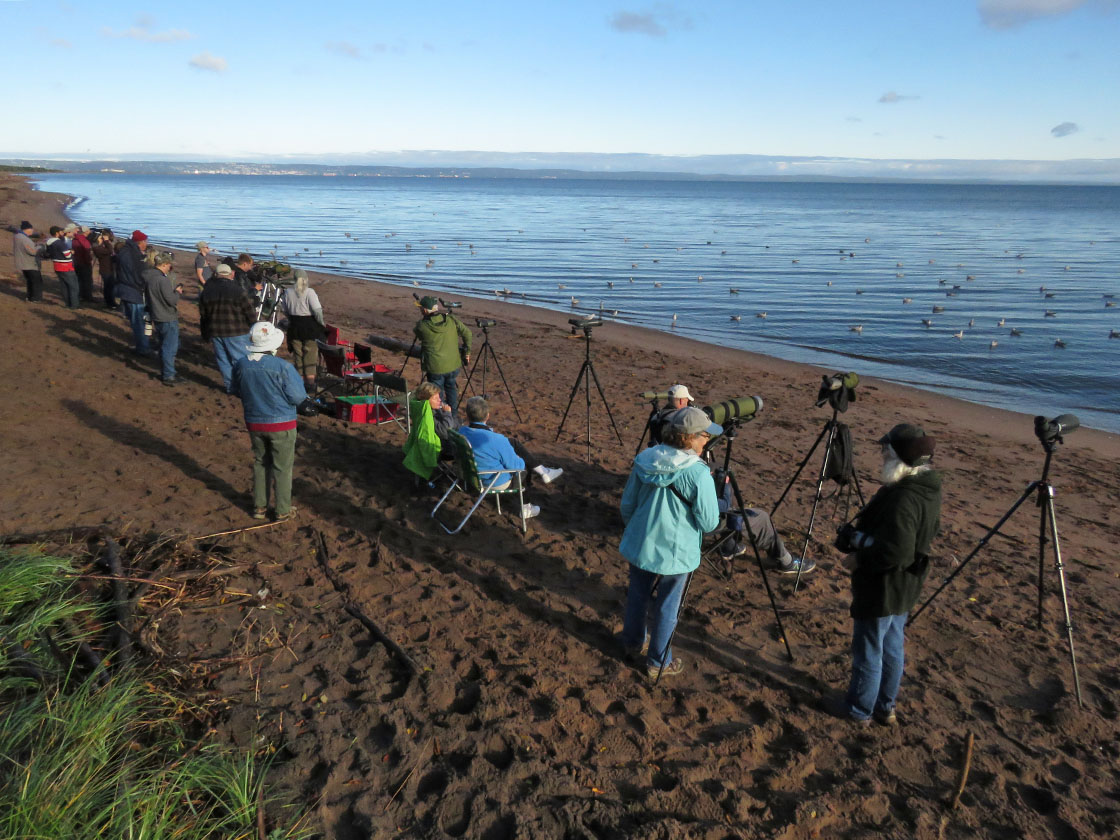 Among the RING-BILLED GULLS that were gathered just offshore a LESSER BLACK-BACKED GULL was again observed, followed by a second individual not far away. At some point, we then spotted a third, and had all three in view at once! Nearby juvenile HERRING GULLS provided a nice comparison, and five BONAPARTE’S GULLS were found swimming among the more distant RING-BILLS.

Other birds observed were CANADA GEESE, a couple of GREEN-WINGED TEAL, a SANDERLING, a LAPLAND LONGSPUR, and a few AMERICAN PIPITS down the beach. Spotted soaring far off to the west was a SHARP-SHINNED HAWK, two TURKEY VULTURES, and an OSPREY.

Passerines were largely absent up and down the Point, but YELLOW-RUMPED and PALM WARBLERS were observed, along with a few WHITE-THROATED SPARROWS.

We were joined on the beach for a time by a group of birders from Minnesota, on a field trip from their Hawk Ridge weekend. We estimated that about 50 birders were present at various times over the course of the morning.

Over the course of the entire weekend, we guessed that at least 80 birders had been present for the 2019 edition of Jaegerfest – which was our 21st year of this event. It seems likely that the rainy forecast for much of the weekend reduced our overall attendance, although we are aware of various conflicts that kept some of our “regular” attendees away – that will always be the case!

Just prior to our 2019 Jaegerfest field trip, the City of Superior completed renovation work on Wisconsin Point, including the enlarging and paving of parking lot #1, the installation of a boardwalk to the beach, and the construction of a bathroom. This meant that we no longer needed to rent a porta potty for our use during this event! Thanks to everyone who participated in our field trip this year, and to Jeff Baughman for co-leading. 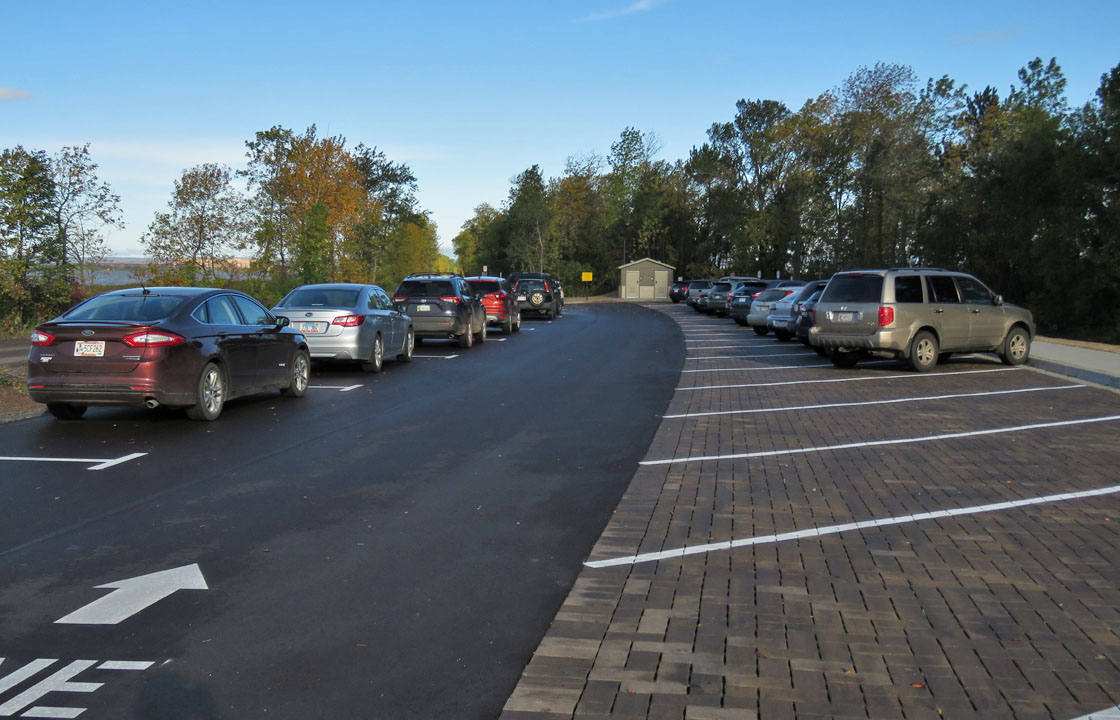 (Addendum: The day after Jaegerfest the birders on the Point observed three SABINE’S GULL and six PARASITIC JAEGERS!)