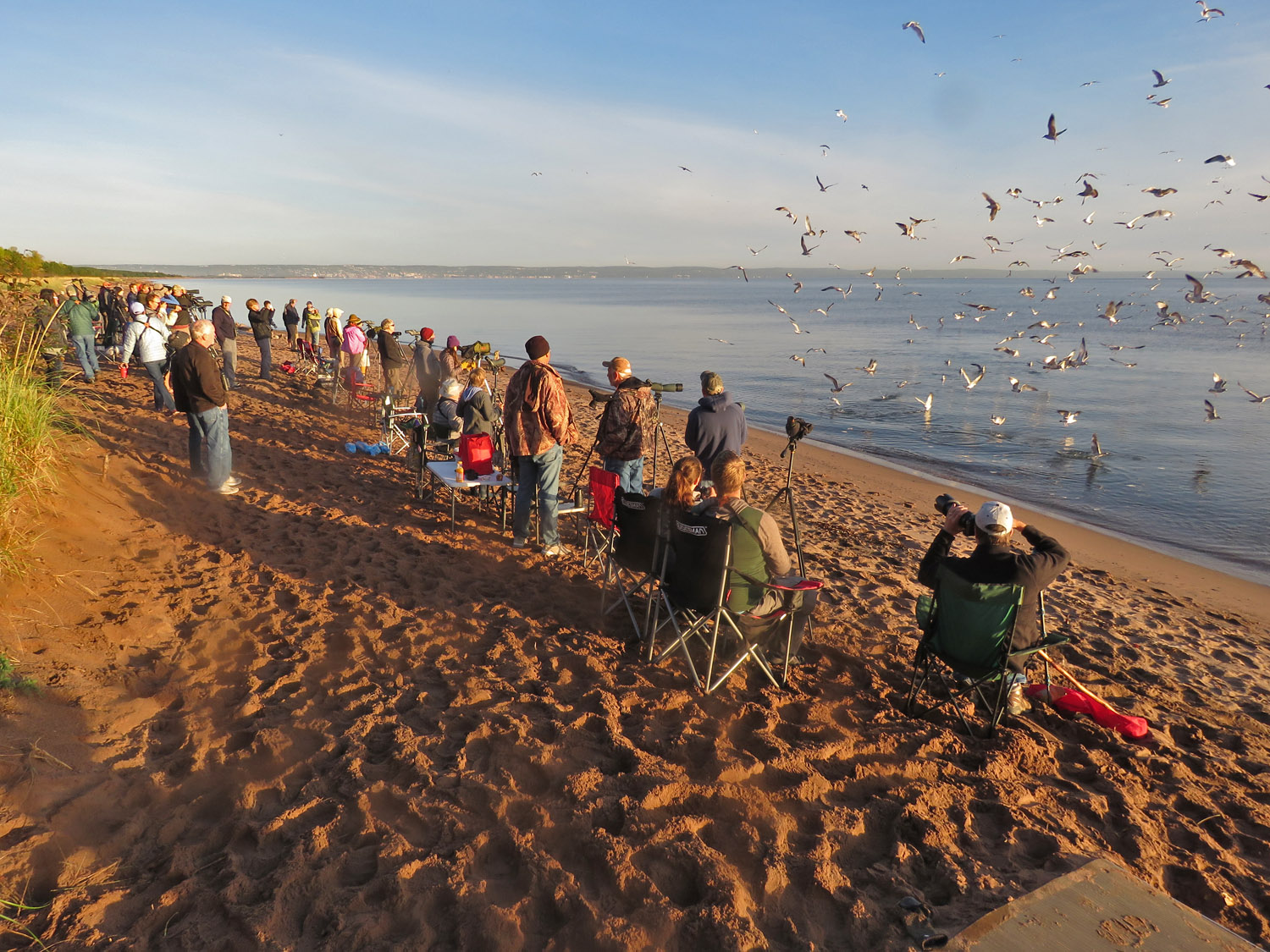 Although Jaegerfest 2021 was not an “official” WSO field trip again this year (due to COVID concerns, like the 2020 cancellation), quite a few birders made the trip to Wisconsin Point from September 16 to 19.  There was a period on Saturday morning when there were roughly 70 birders present on the beach!

Wendy and I arrived on Thursday morning (9/16) about 8:20 AM, and it was only a few minutes later when I spotted a SABINE’S GULL, flying towards shore to the east of us!  Unfortunately, it soon became badly backlit against the morning sun, so the others weren’t able to see the bird before it disappeared.  Only about 30 minutes later, though, another three SABINE’S GULLS came flying in – and those provided excellent looks in good light! 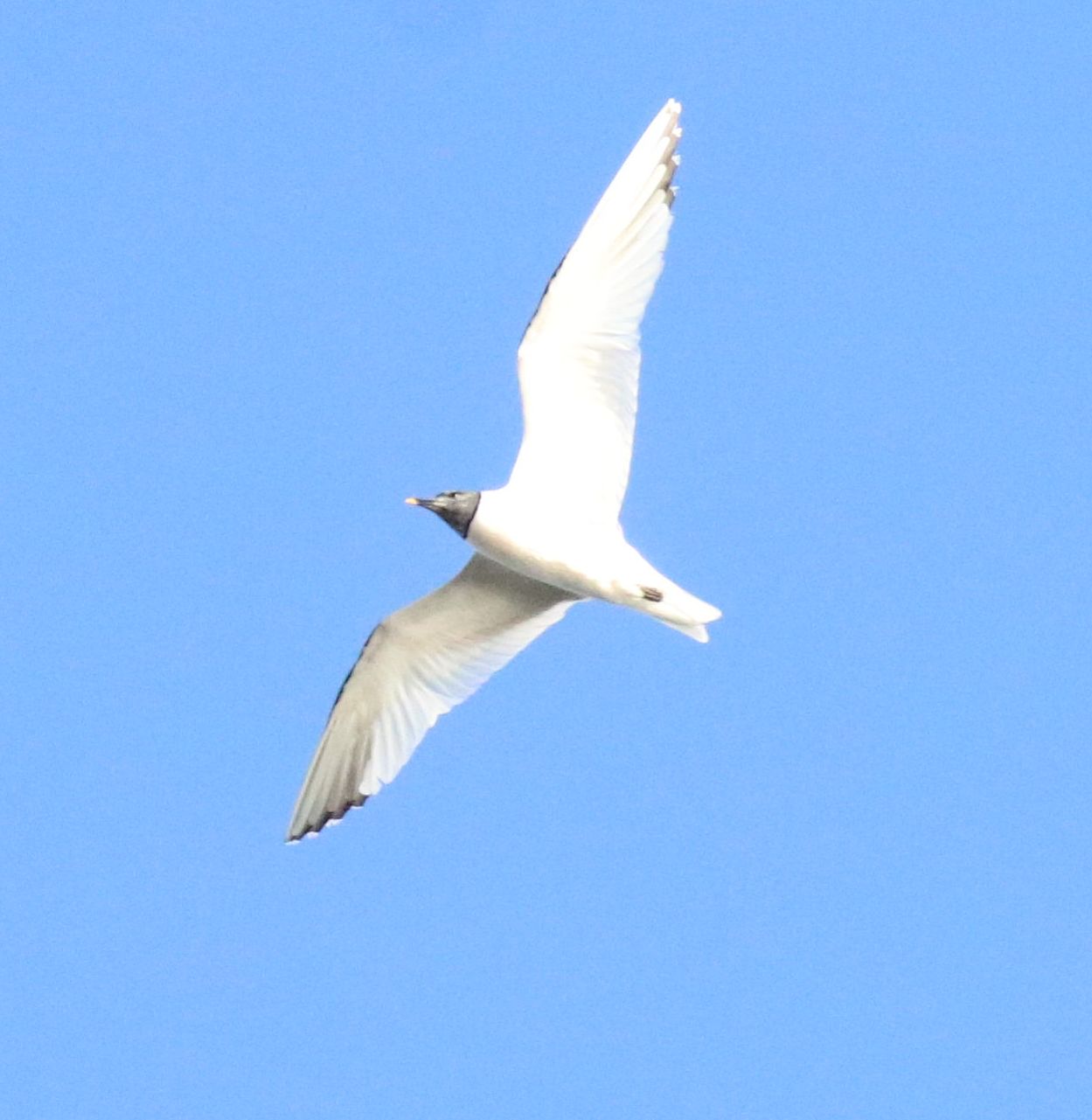 A short time later an adult PARASITIC JAEGER flew past – an intermediate morph, with pointed central tail feathers that were quite noticeable. This bird was also seen several additional times. 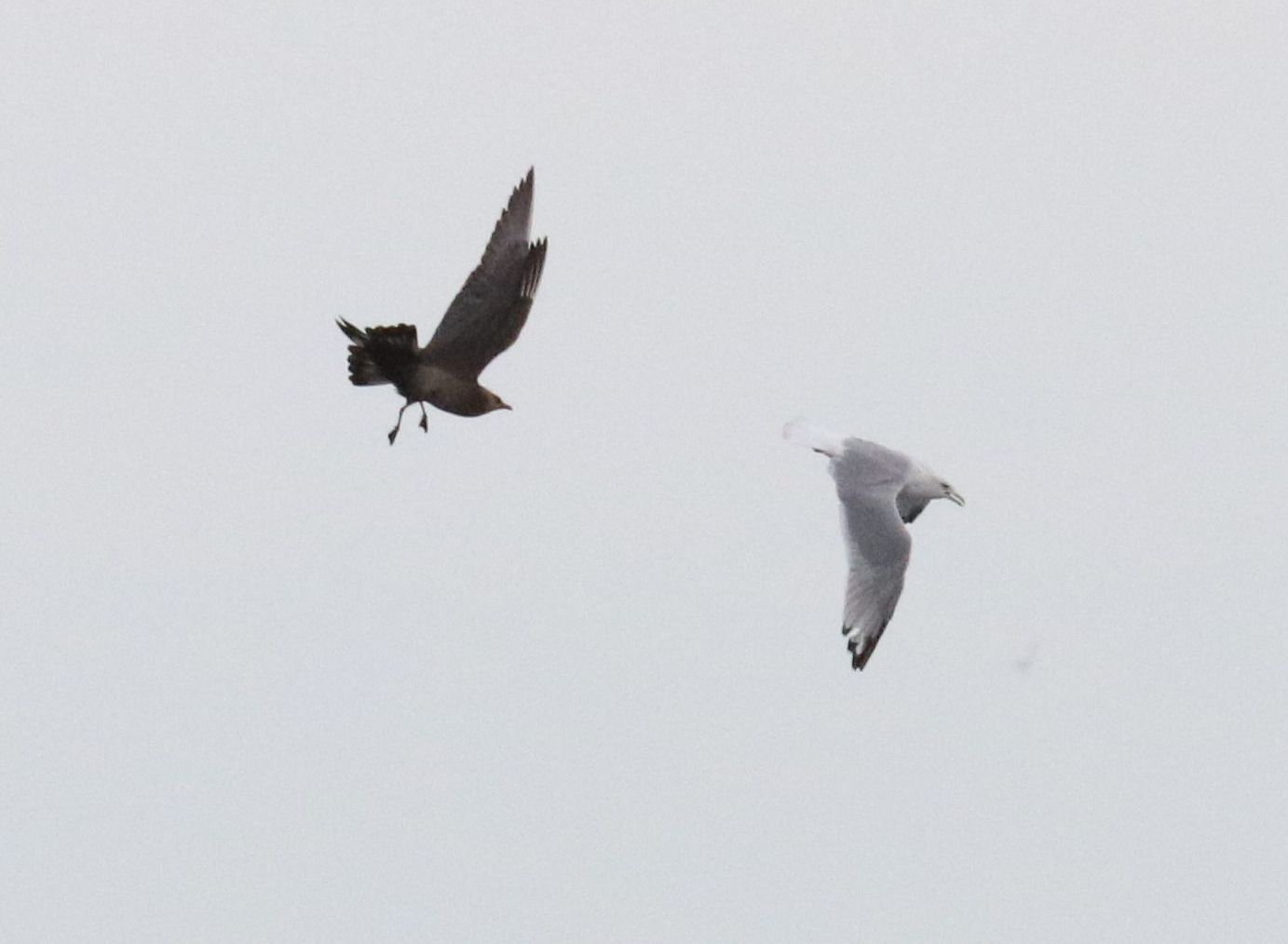 Two GREAT BLACK-BACKED and a LESSER BLACK-BACKED GULL were spotted among the numerous RING-BILLED and HERRING GULLS on the water, as well as a few BONAPARTE’S GULLS. 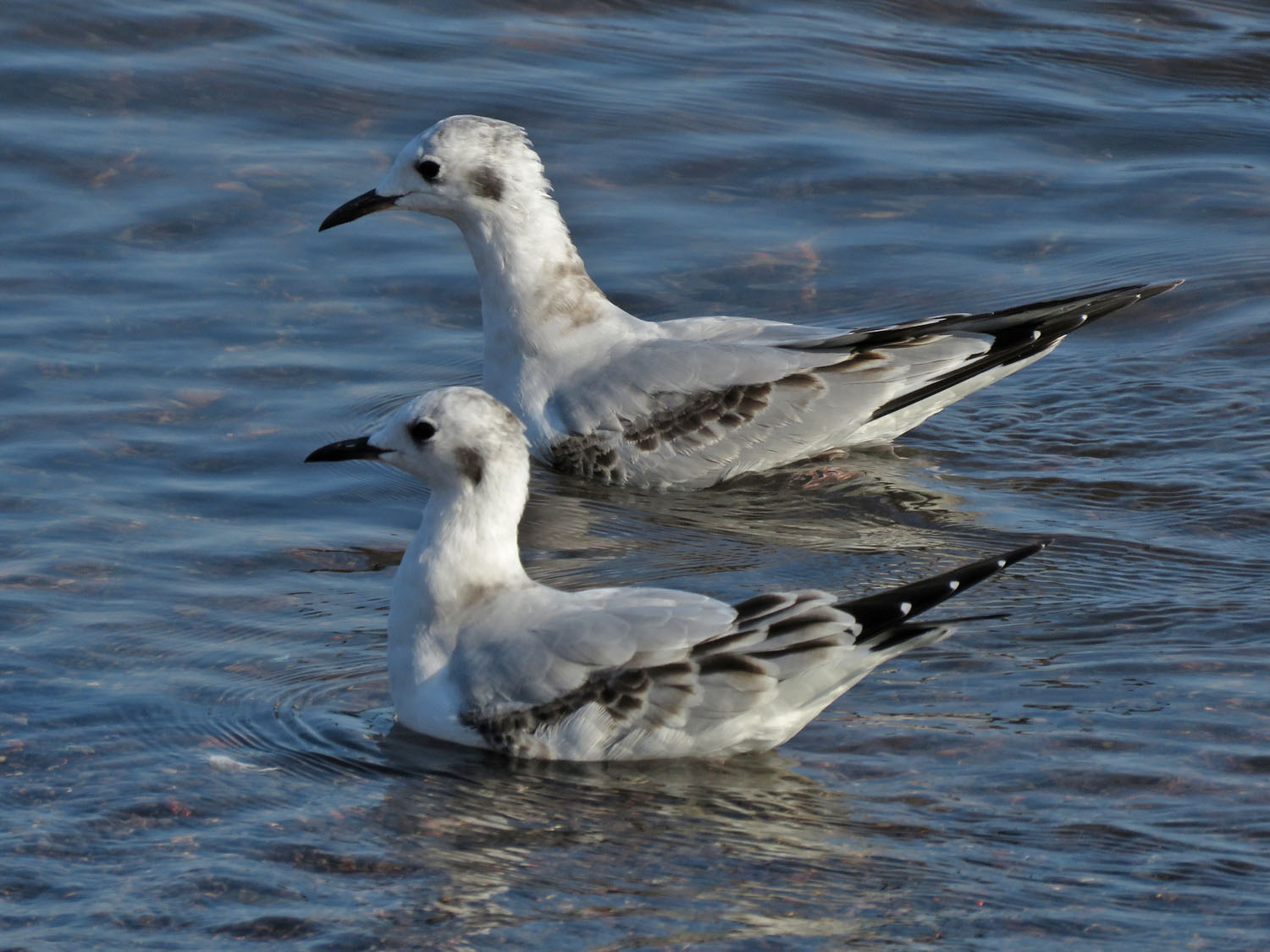 Around noon a lone SNOW GOOSE (blue morph) was spotted as it flew past with a small flock of CANADA GEESE.  Also observed during the day were about 13 SANDERLINGS, a group of 4 COMMON TERNS, and about four species of warblers – with a total list for the day of about 37 species.  About a dozen birders were present. 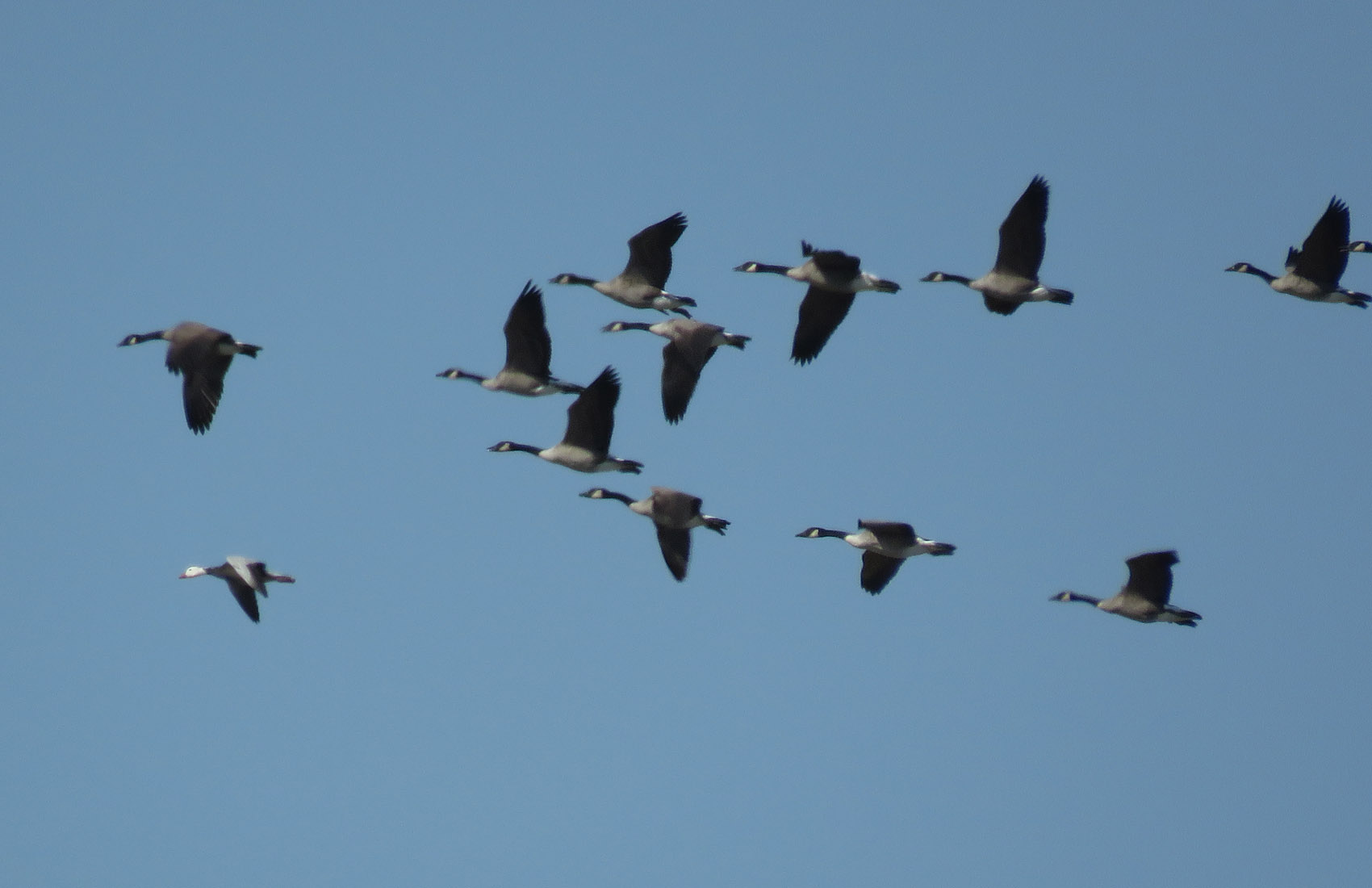 Friday morning (9/17) was cloudy and mild, starting about 58 degrees, with the wind from the west at about 10-20 mph.  About 7:22 AM a group of four SABINE’S GULLS were spotted as they swam among the other gulls.  After a short time they took flight, providing very nice looks at their distinctive wing pattern until they landed again for a bit – and then they took off again about 7:50, and headed off into the distance.

There was great excitement about 8:00, when three BUFF-BREASTED SANDPIPERS were suddenly spotted down the beach to the west of us, providing nice scope views.  Then about 8:15 the first PARASITIC JAEGER of the day showed up, an adult (or near-adult), followed by another PARASITIC JAEGER that arrived about 20 minutes later. This second bird was a juvenile, and it happened to be the only young jaeger that we saw for the entire weekend.  (And we had seen NO juveniles last year, either.)  In previous years most of the jaegers we saw were juveniles, so the apparent decrease in reproduction is somewhat concerning. 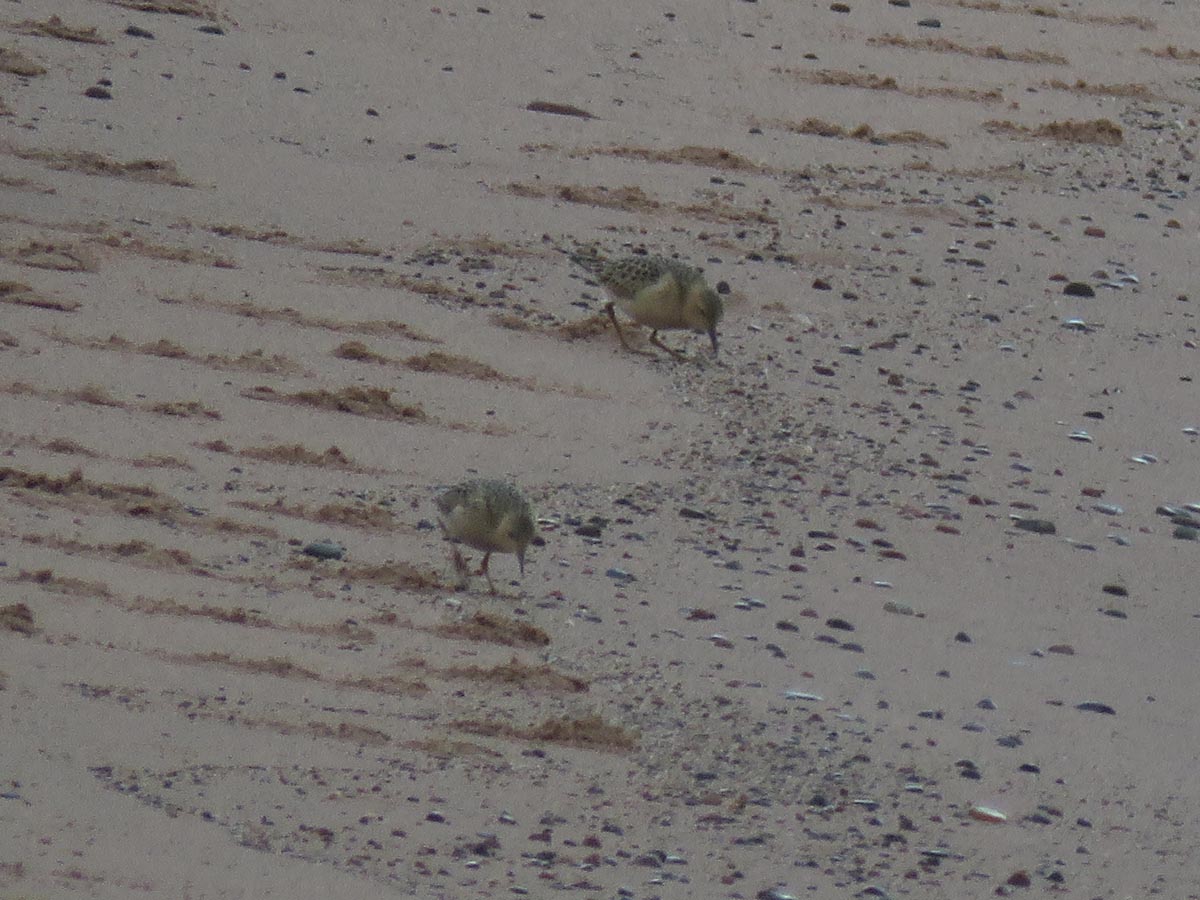 At about 8:50 we spotted a NORTHERN HARRIER that came flying across the lake, followed about 15 minutes later by a PEREGRINE FALCON, which had several interactions with the gulls and also a PARASITIC JAEGER – and we were greatly entertained as the falcon and jaeger took turns chasing one another! Around 10:00 a FRANKLIN’S GULL was observed not far offshore, swimming among the RING-BILLED GULLS.  We had numerous sightings of SANDERLINGS throughout the day, with a number of them running around on the beach right in front of us! 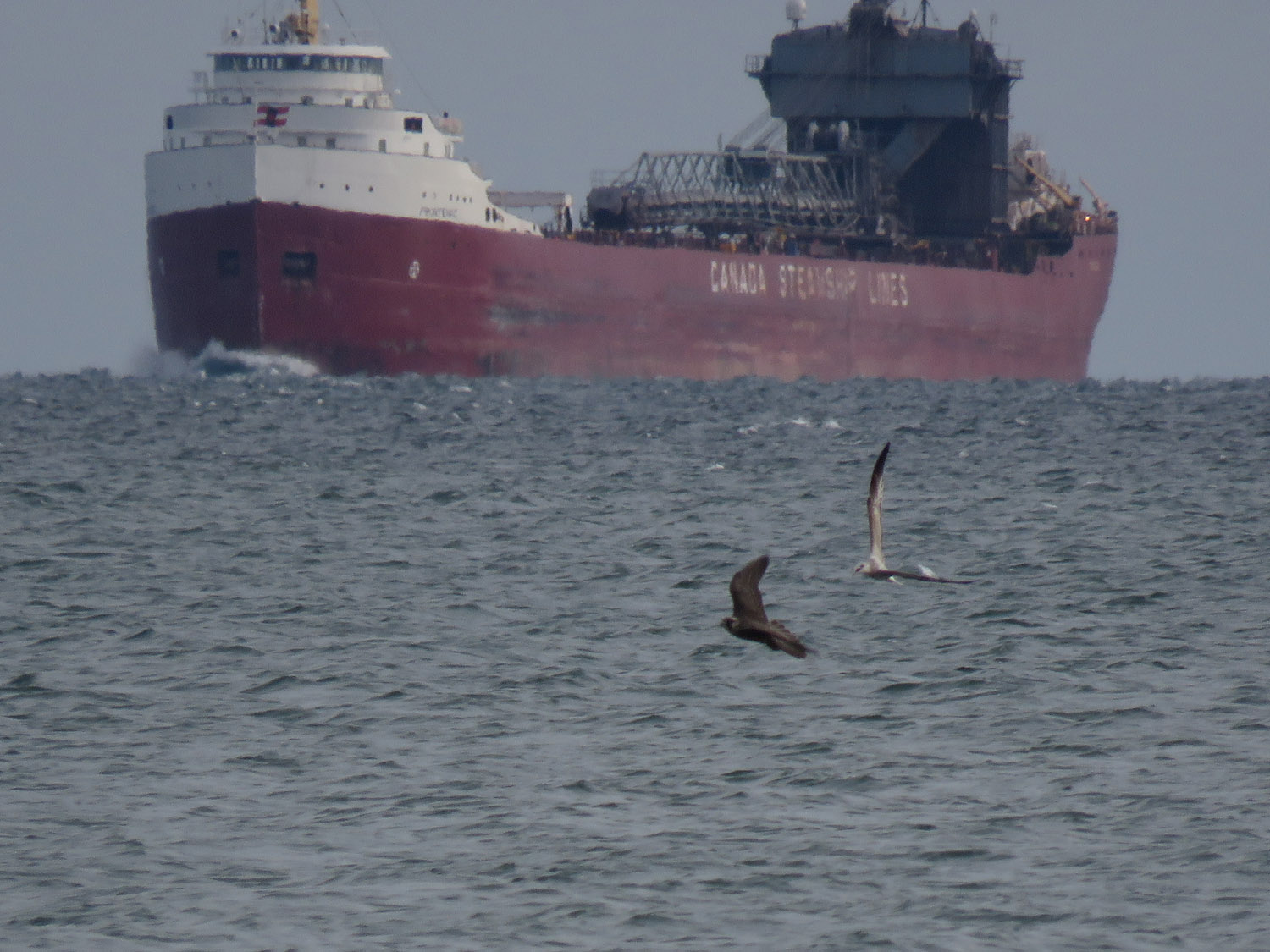 Some of us traveled down the Point to look for passerines and other species, and we found several BAIRD’S SANDPIPERS on the beach in Allouez Bay.  At least 13 types of WARBLERS were also found (including NO. PARULA, BAY-BREASTED and ORANGE-CROWNED), as well as a MERLIN, a PHILADELPHIA VIREO, a GRAY-CHEEKED THRUSH, a LINCOLN’S SPARROW and other species.  The day total for the Point was about 85 species.

Saturday (9/18) started out clear, calm, and chilly – around 41 degrees initially, then later reaching a high of about 80 degrees.  The wind gradually picked up – initially from the SW, then later switching to the north at 10-15.

About 6:30 AM a group of RED-WINGED BLACKBIRDS appeared in the trees behind us, and then suddenly someone spotted a YELLOW-HEADED BLACKBIRD.  It turned out to be a female, and we learned that this might have been the first fall record ever for Douglas County! 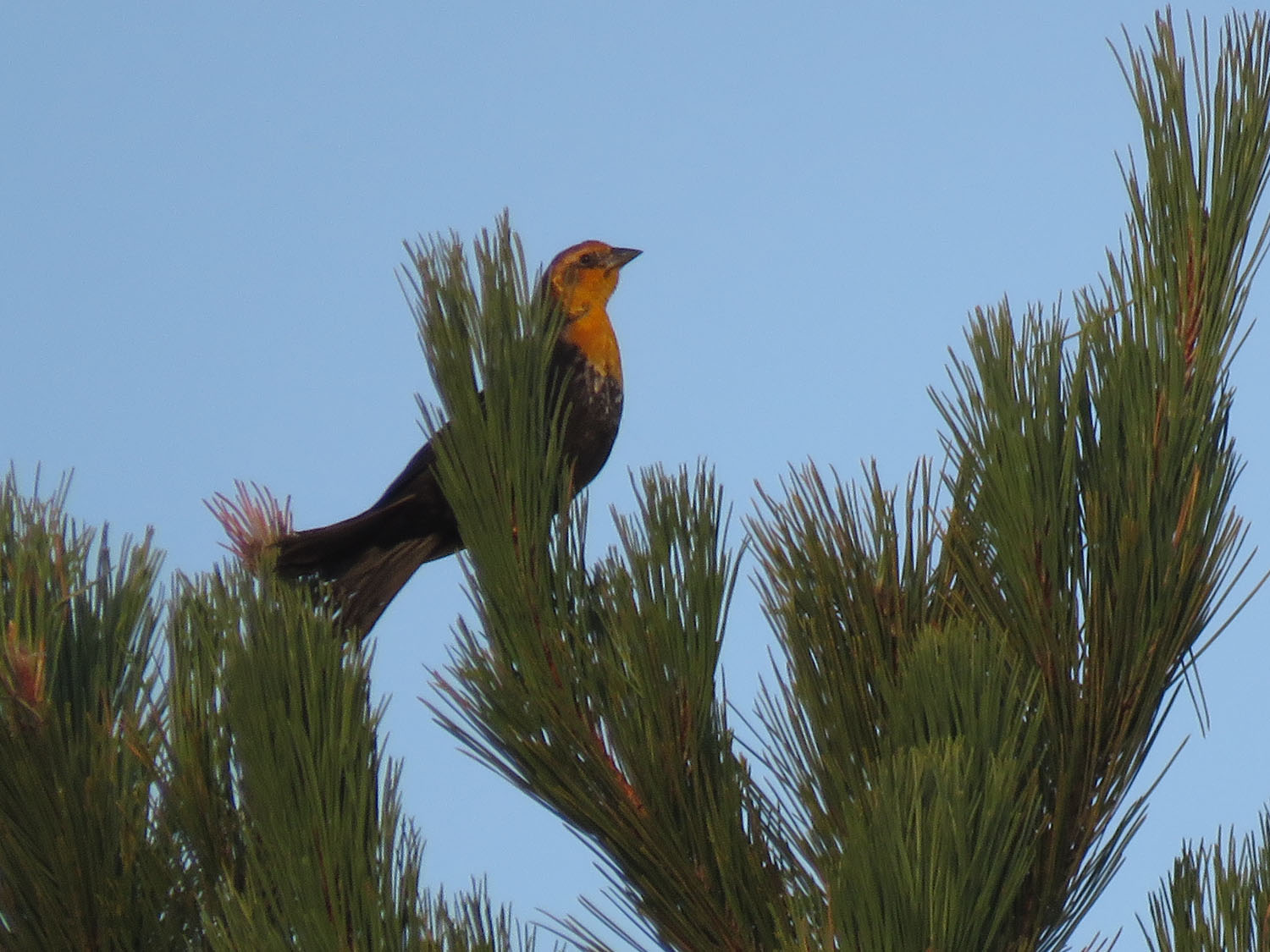 Around 6:50 a small group of AMERICAN GOLDEN-PLOVERS flew past, and some BLACK-BELLIED were also seen.  A few SANDERLINGS were also spotted as they flew past.  Waterfowl included BLUE-WINGED TEAL, NORTHERN SHOVELER, AMERICAN WIGEON, and GREEN-WINGED TEAL, and later a pair of SURF SCOTERS flew by – flying west, low over the water. 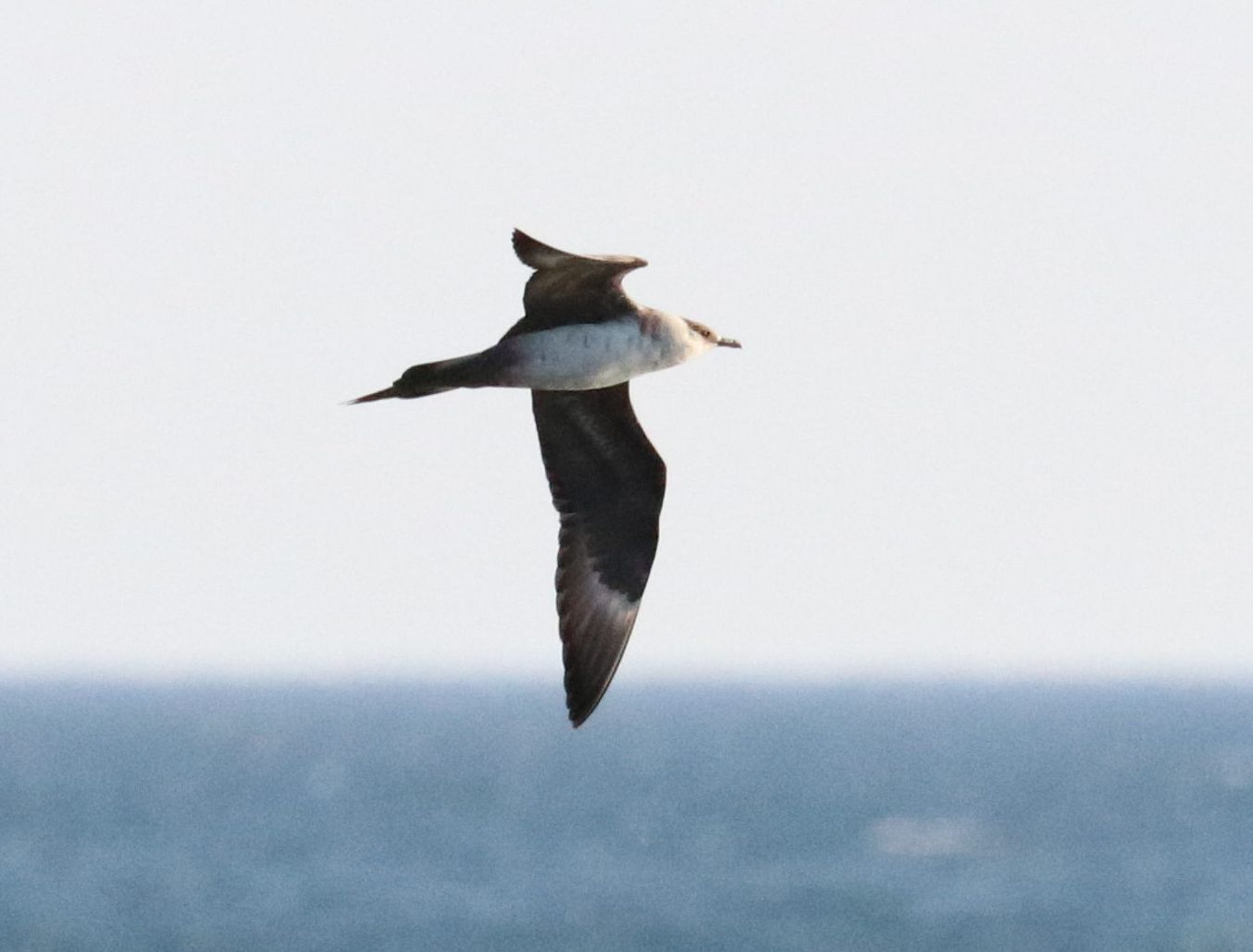 The first PARASITIC JAEGER of the day arrived about 7:42, followed by two more JAEGERS at 8:14 – with multiple sightings of these three individuals throughout the day – often with two hunting together.  At 7:57 a flock of COMMON TERNS flew by, and somewhat surprisingly, a SABINE’S GULL was spotted flying among them!

About 30 minutes later three more SABINE’S GULLS came flying in, and they kept heading in our direction.  The birders had great looks at these birds, as they flew almost directly over our heads, heading inland.  Added excitement came from the fact that two of the SABINE’S were adults – a plumage we have rarely seen here!  Additional SABINE’S GULLS were spotted during the morning, with a total of perhaps 8 or 9 altogether. 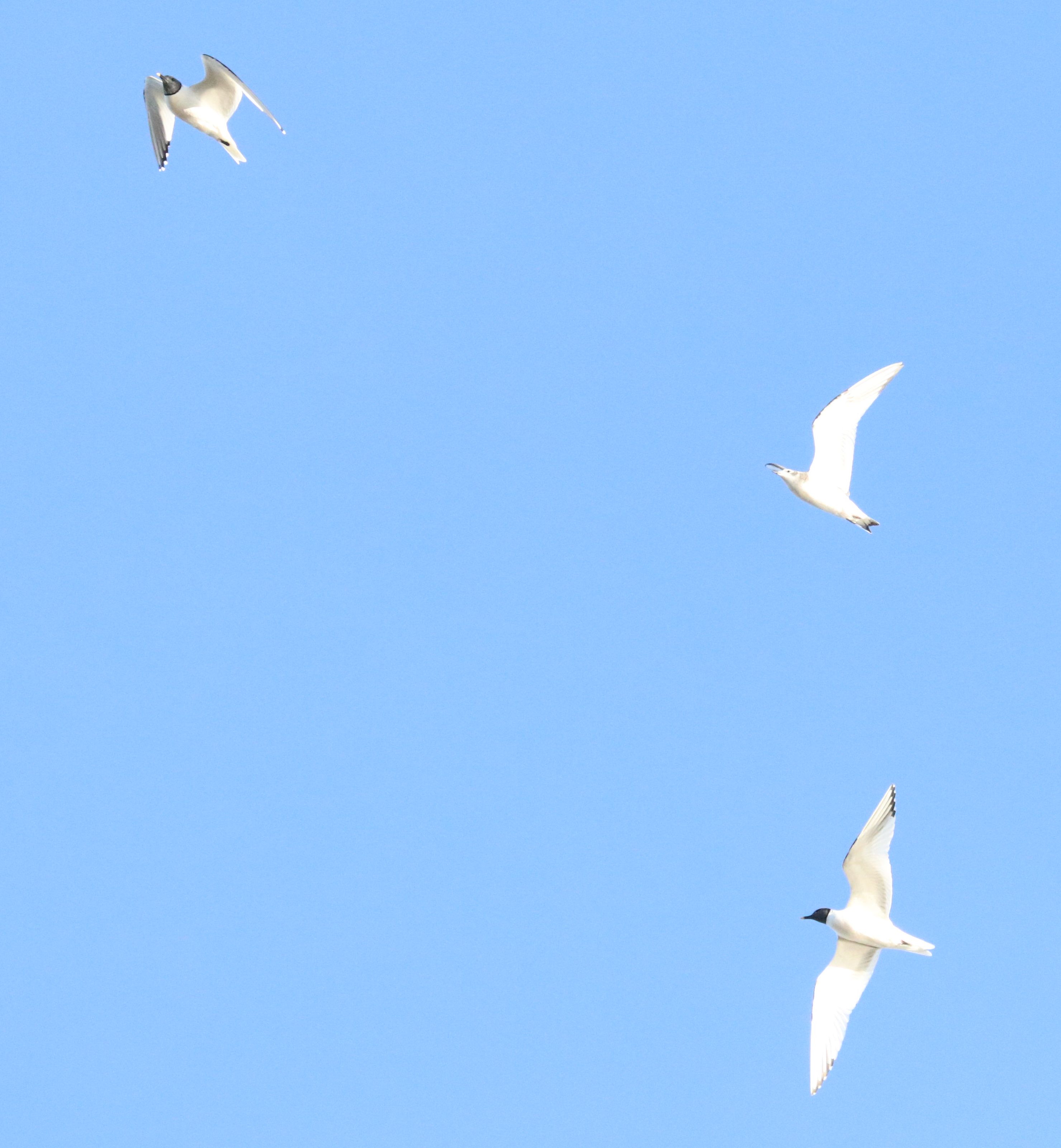 Three species of GREBES were observed during the day, including two RED-NECKED, three HORNED, and a PIED-BILLED, and a COMMON LOON flew past us.  Around noon a LESSER BLACK-BACKED GULL was spotted on the beach among other gulls.  A number of FRANKLIN’S GULLS were observed, with a group of 8 swimming well offshore about 8:45. 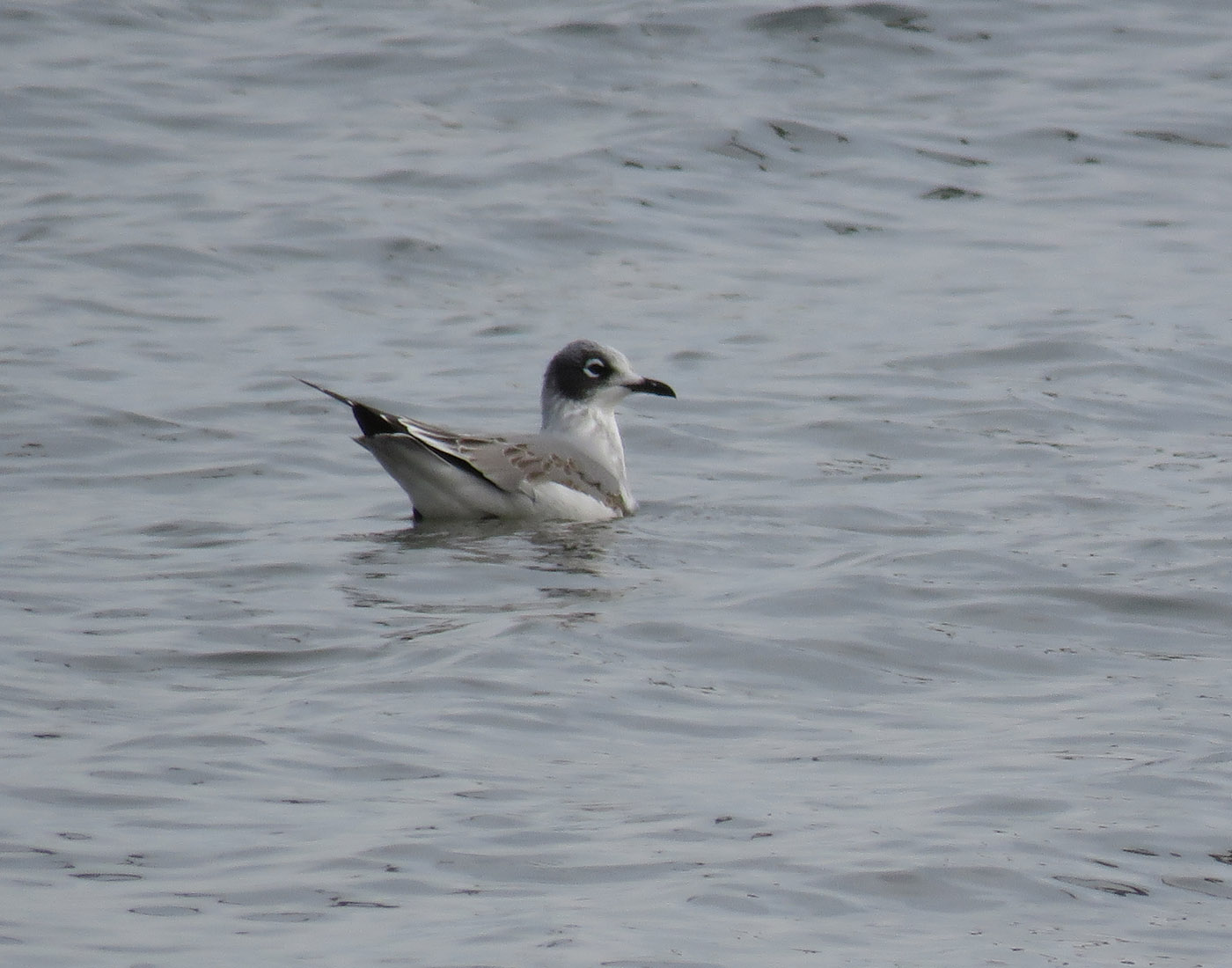 Waterfowl were not numerous, but a variety was present – including BLUE-WINGED and GREEN-WINGED TEAL, NORTHERN SHOVELER, and AMERICAN WIGEON.  A few LESSER SCAUP flew by, and then about 9:45 a couple of SURF SCOTERS were spotted skimming low over the water, heading west.

Around 10:25 a message was received that a HARRIS’S SPARROW had been spotted way down the Point.  Many birders left the beach in hopes of finding it, but unfortunately the bird didn’t show.  A nice group of WHITE-THROATED SPARROWS were found, as well as an immature WHITE-CROWNED, along with single LINCOLN’S, SWAMP, AND CHIPPING SPARROWS.  A few WARBLERS were also observed, but the Point was generally pretty slow for passerines.

In the afternoon about a dozen birders took a drive over to Port Wing to check the harbor.  A group of RING-BILLED and HERRING GULLS were present, along with a couple of CASPIAN TERNS, and some shorebirds were spotted – including SANDERLING, BAIRD’S SANDPIPER, and a SEMIPALMATED PLOVER.   A brief visit to the mouth of the Bois Brule River produced several birds, including HOODED MERGANSER, BELTED KINGFISHER, HAIRY & PILEATED WOODPECKERS, YELLOW-BELLIED SAPSUCKER, and CHESTNUT-SIDED WARBLER. The day’s bird total was around 87 species.

I should add that a beach clean-up was conducted this day by The Friends of the Lake Superior Reserve and they set up a tent and tables in the parking lot.  They handed out bags, and weighed the trash that was collected.  A number of birders participated in this effort.

Sunday (9/19) was clear, with the morning temperature in the mid-60s, and a light to moderate southwest wind.  Around 25 -30 birders arrived on the Point, with the typical BALD EAGLES and gulls soon starting to show up. At one point, three SABINE’S GULLS were spotted among the other gulls on the lake, with another one seen later, and a couple of PARASITIC JAEGERS made appearances – likely some of the same adults we’d seen on the previous days.  A couple of HORNED GREBES provided nice looks as they swam offshore, and a couple of COMMON LOONS came by.  A variety of other birds were also spotted, including a SANDHILL CRANE, a MERLIN and a SWAINSON’S THRUSH, but overall the activity was light.  By 9:00 AM, many birders were starting to depart from Wisconsin Point as they began heading for home.

Thanks to Adam Knueppel and Jeff Baughman for co-leading this event – another successful Jaegerfest weekend, with lots of nice highlights for those who attended, and great opportunities for conversation with old and new friends!