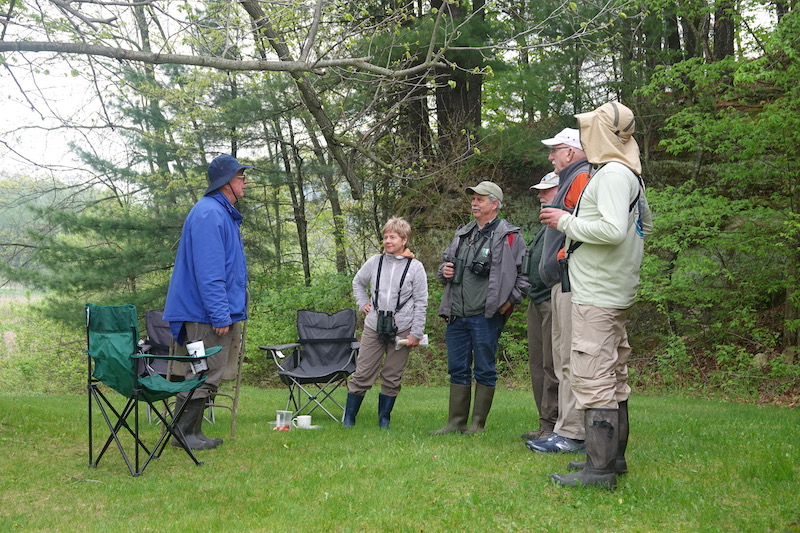 WSO’s annual Honey Creek Birdathon took place Sunday, May 16 after a decision was made to proceed with the event amid the easing of pandemic cautions against group gatherings. The Bandathon was held the weekend prior to the Birdathon and was not included as a public offering this year. Members were invited to attend two leisurely offerings: one walk at 7 a.m. and another at 9. Most who attended the early walk joined the later one as well.

A small group of us arrived Saturday evening to “camp out” and begin our morning count prior to the first walk’s arrivals.  We set out from the Cox Nature Center around 3:45 a.m. to meet our first guest, Dr. George Archibald, on Alder Drive. Archibald co-founded the International Crane Foundation in Baraboo in 1973. A true pioneer, with work spanning nearly 50 years, his dedication to crane conservation has made an enormous impact in protecting all 15 crane species and their habitats across the globe. 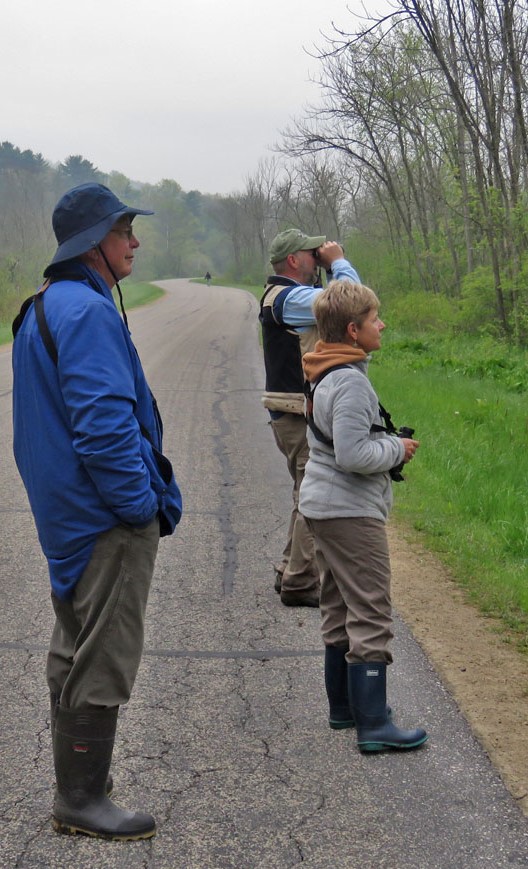 Our small group slowly made our way down Alder. A few Eastern Screech and Barred Owls were heard calling. The nasally peeent of American Woodcocks, the hollow whistle of a Black-billed Cuckoo and the guttural knocking of a Yellow-billed Cuckoo all kept our attention in the early hours. Another pleasant and unexpected surprise was the call of an Eastern Whip-poor-will in perhaps one of its last hunts of the night prior to returning to its roost.

As light approached, we walked down Skyview Drive to the trailhead.  Along the way we heard a Willow Flycatcher close to the road, but it was too dark to get any looks. Also notable were the singing of a couple of Sedge Wrens, a Golden-winged Warbler, and a few Blue-winged Warblers- the latter providing a couple of views.

Setting out on the trail, Yellow-bellied Sapsuckers were heard drumming. Northern Waterthrush could be heard singing, and the jumbled ending to the song of the Louisiana Waterthrush eventually was heard as well. It was good to see a couple of Eastern Phoebes, whose numbers this year seem to be down. Along with some other short distance migrants, they may have suffered from abnormally harsh weather in the southern part of the country earlier this year. Yellow-throated Vireos sang above in the treetops. 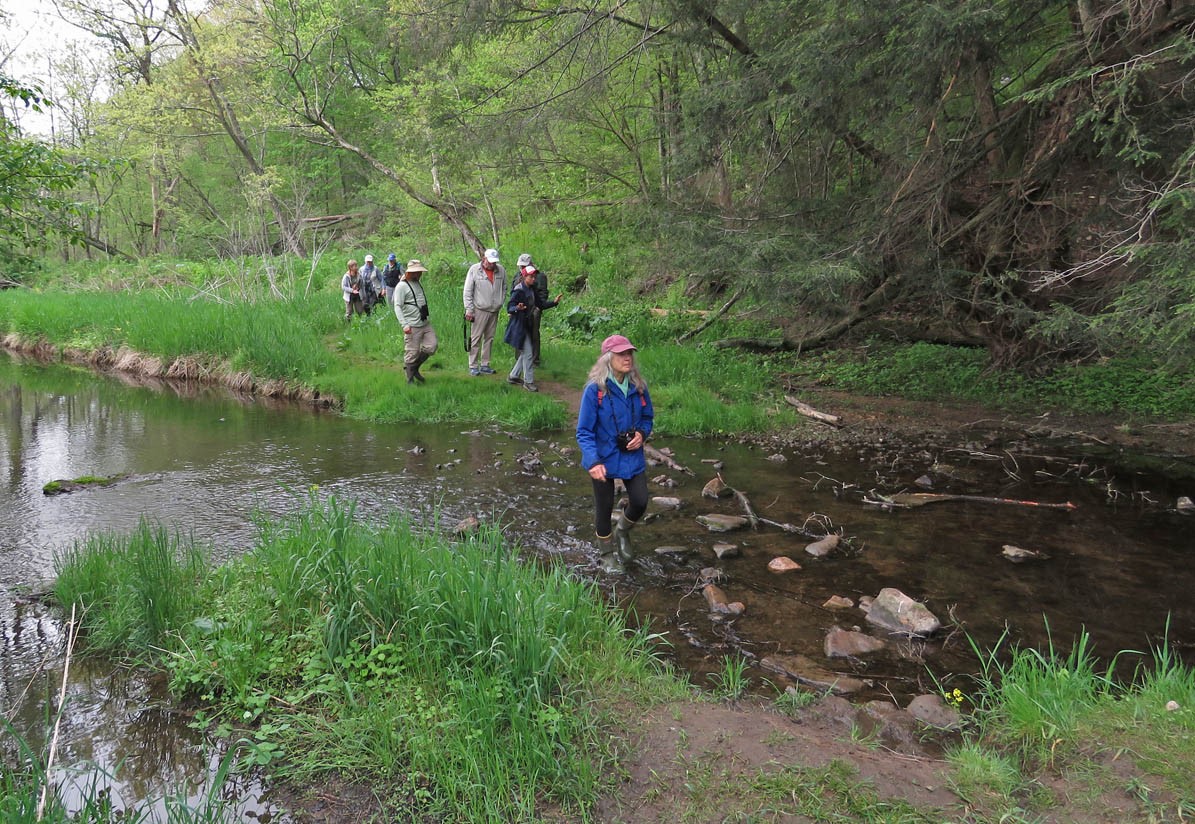 Our scheduled walks saw a nice variety of warblers, with highlights being Blackburnian, Cape May, Northern Parula, Wilson’s and Chestnut-sided. Other flycatchers added to our list were Great Crested, Alder, Least and Eastern Wood-Pewee. A number of Wood Thrush were kind enough to sing their song, two Veery were found, and a few Swainson’s gave us some looks. Northern Flicker, Pileated, Hairy, Downy, Red-headed and Red-bellied were added to our woodpecker count. The high whistle of a Broad-winged Hawk was also notable. 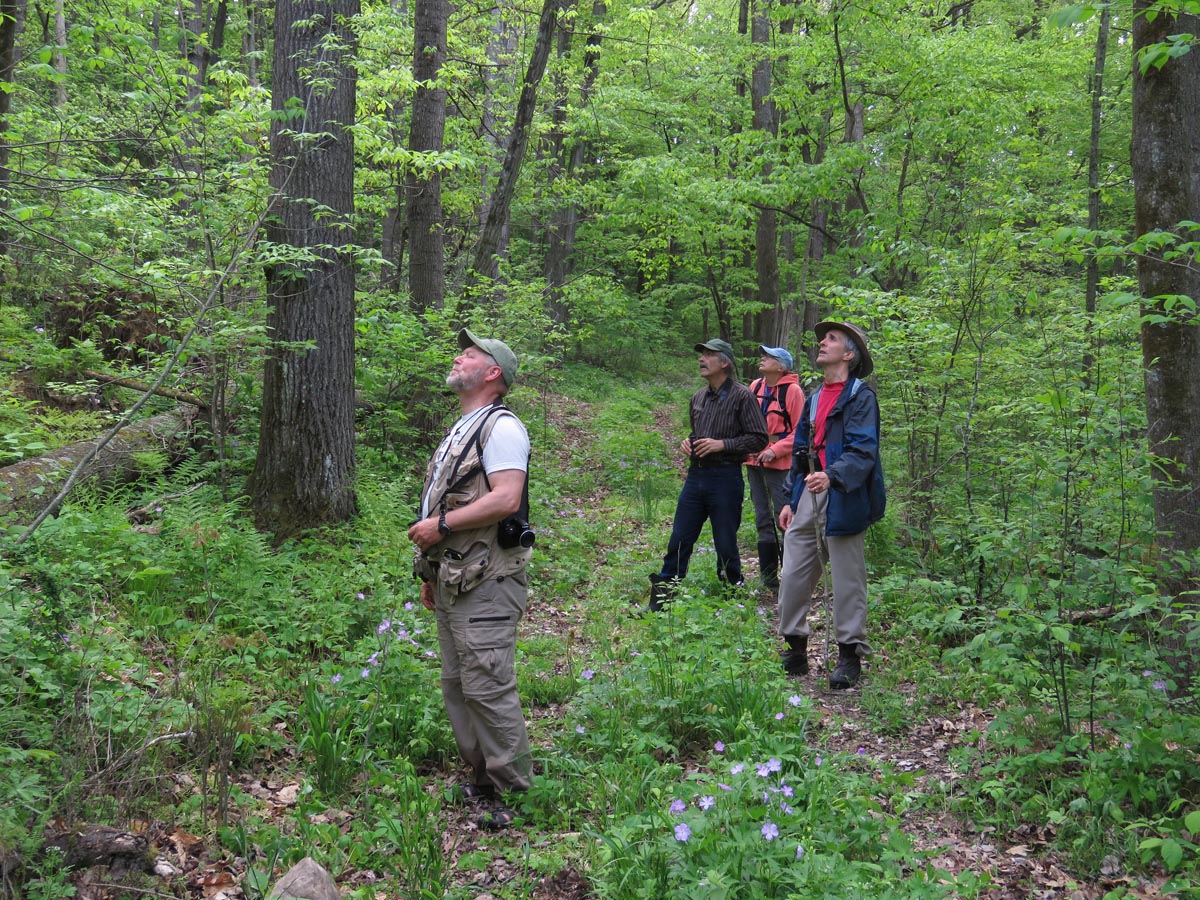 Photo by Tom Schultz
The Honey Creek Birdathon included a visit to the Dischler addition, where members could see why it  was such an important purchase for WSO.

Overall we ended the day with 85 species – right at our long-term average --  including 19 warblers, 6 flycatchers and 7 woodpeckers. Thanks to Tom Schultz and Jeff Baughman for helping lead the trip. I am already looking forward to next year’s Honey Creek Birdathon with a larger crowd able and interested in joining  us....Good Birding!