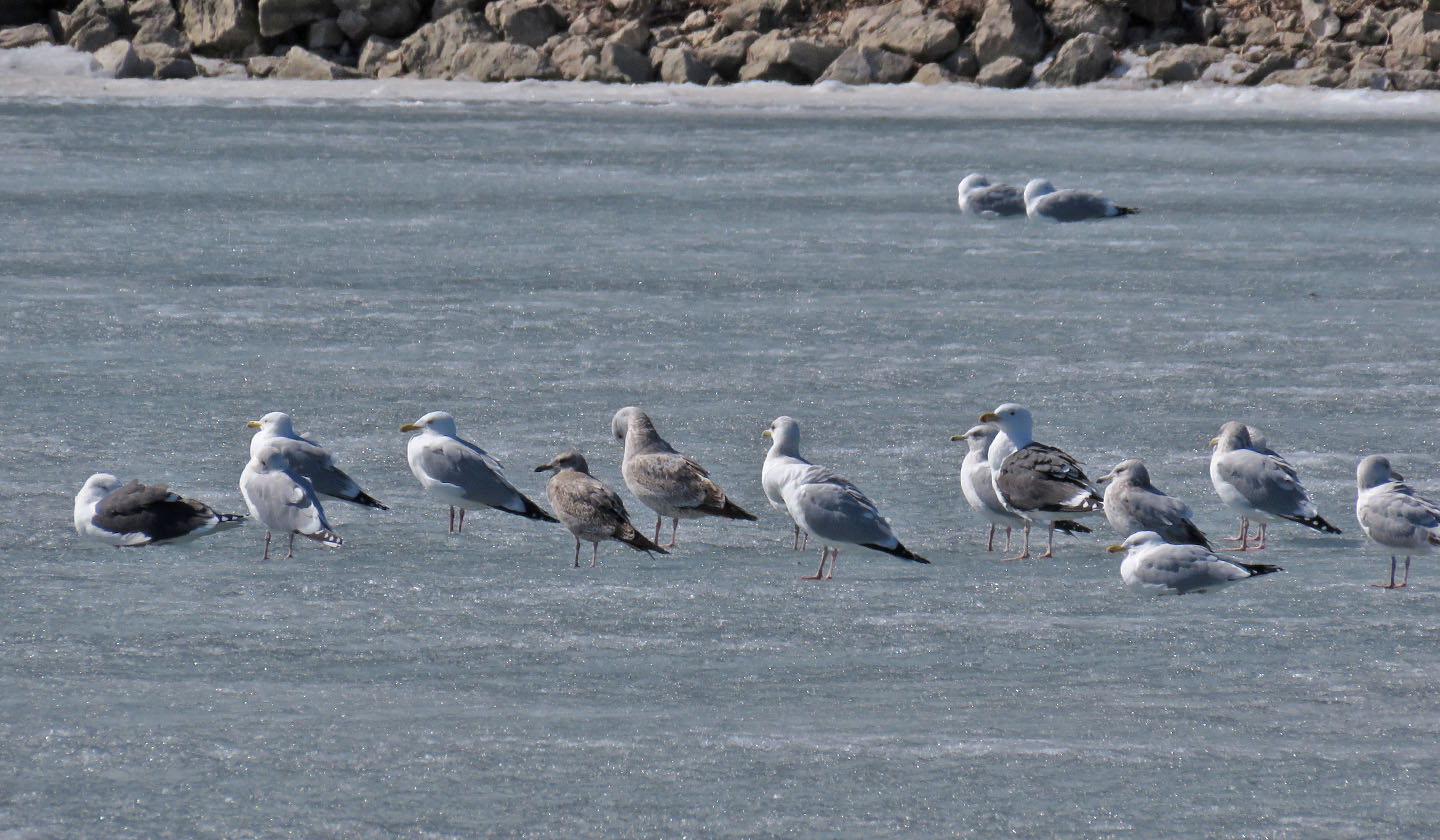 Folks meeting at the Sheboygan Harbor were greeted with clear skies, tolerable winds, and a warming sun for our third outing of the year. The temperature was 36 degrees and the wind out of the SW averaging around 10-15 mph. In comparison to last month’s frigid trip to Buena Vista Grasslands, everyone appeared to be a little bit more enthusiastic. Travel conditions were favorable and the weather was cooperative. The excitement of newly arriving migrants in the weeks leading up to the trip was evident. Conversations about first of year species, local reports, and rarities were overhead.

The harbor was pretty quiet but we were able to start the list off for the day. Mallards, Canadian Geese, Greater Scaup, a lone Lesser Scaup, and a few American Coots were observed on the lake. Ring-billed and Herring Gulls were flying overhead and Common Grackle and American Robin were found around the parking lot. Two Eurasian Collared-Doves made a quick pass over the group. Tom Schultz and Jeff Baughman (who also helped lead this trip) arrived to the harbor with a report of a Carolina Wren and Great Tit they had found at Sheboygan Indian Mound Park. After a quick headcount, our decision was easy and our first destination would be Indian Mound Park.

We arrived around 8:30 a.m. and were welcomed to the calls of a Red-breasted Nuthatch. The group set out to find our target species. Along the way a nice flock of Tundra Swans passed overhead. The hunt for the Carolina Wren was unsuccessful for the group, but did yield quite a few other species. White-breasted Nuthatch, Northern Cardinal, American Goldfinch, Dark-eyed Juncos, Red-bellied and Downy Woodpeckers, Black-capped Chickadees, Pine Siskins, and eventually, a few Great Tits.

Following a bathroom break at a nearby gas station, our group headed to Rangeline Road to check the flooded fields. Northern Shoveler, Sandhill Cranes, Killdeer, and Red-winged Blackbirds were all appropriate finds along this stretch. A couple of Red-tailed Hawks were spotted, as well as a brief look at a Meadowlark. Distinction between Eastern or Western could not be made.

We decided to head back to the lake and traveled to Hika Park in Cleveland. The group glassed a large raft of Greater Scaup and found a Bufflehead, Common Goldeneye, some Red-breasted Mergansers, a Horned Grebe, and a White-winged Scoter! The temperature was now in the upper 40’s and around 11:15 a.m. we decided to continue north to the Manitowoc Impoundment. 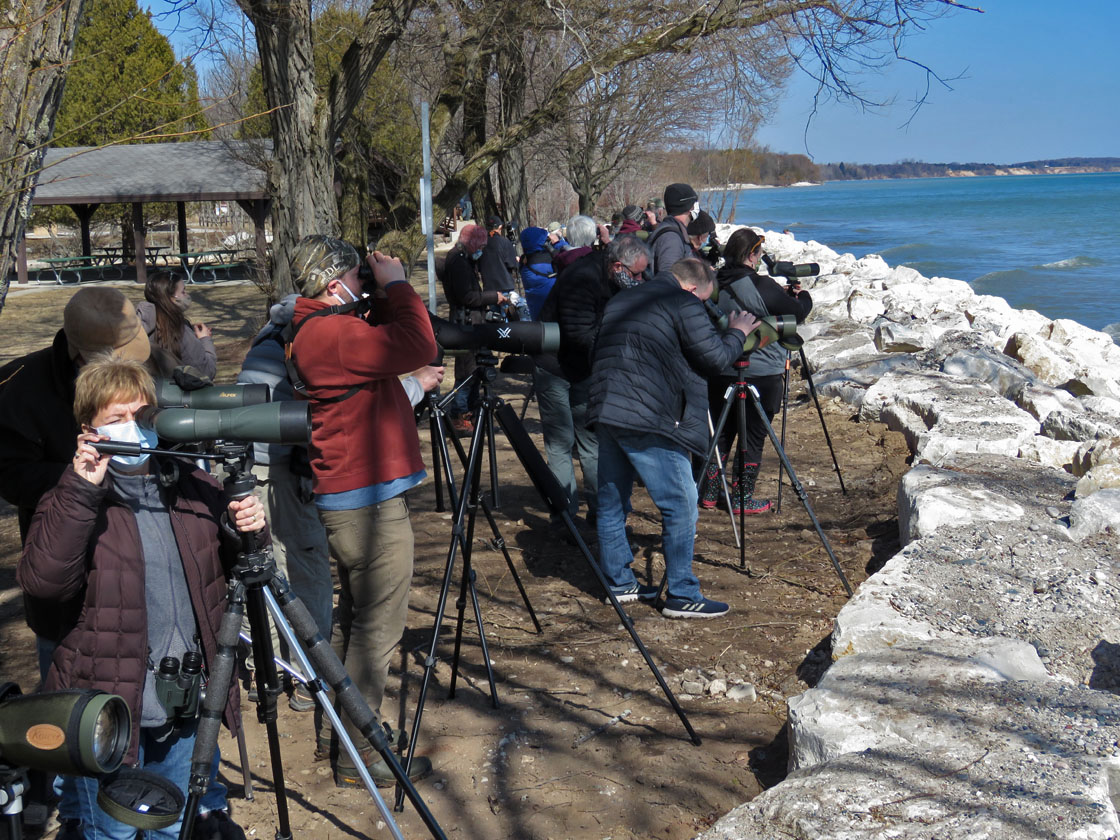 We arrived at the Manitowoc Impoundment around 11:45 and among some Herring and Ring-billed Gulls, a Great Black-backed Gull laid on the ice, basking in the sunshine. It was eventually joined by another one that landed nearby and gave some really great looks. We added a few Redheads to our list and observed a few large flocks of Tundra Swans fly above. As we were leaving a third Great Black-backed Gull soared over the group of gulls, giving some good looks of itself in flight. 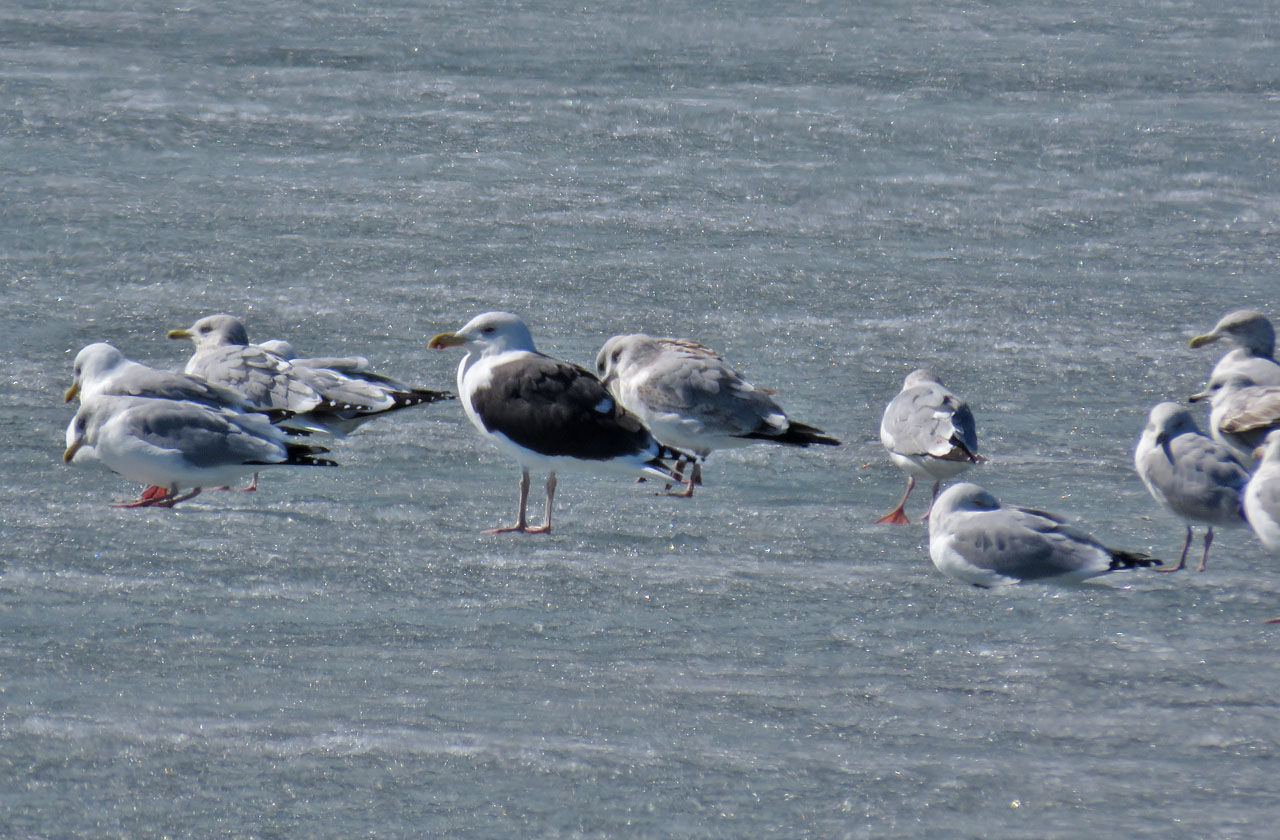 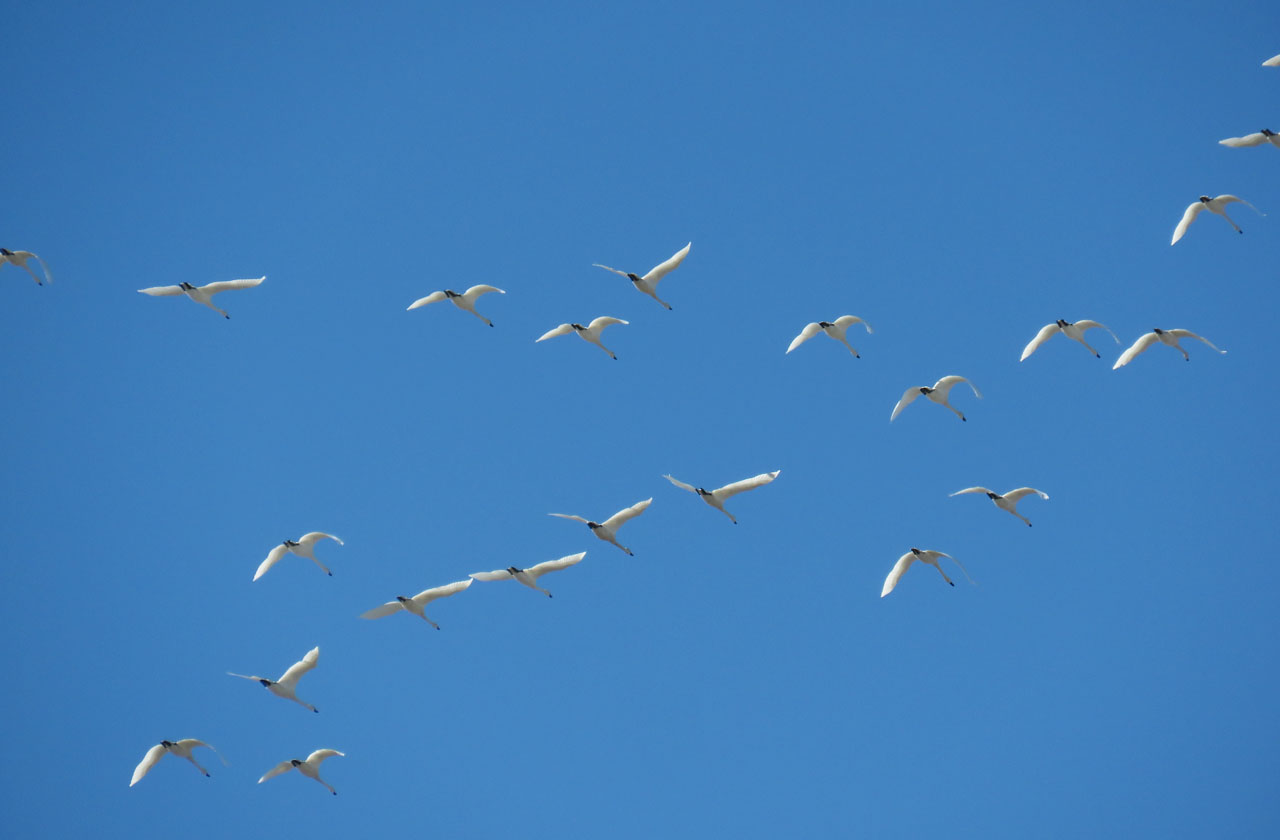 We headed across the street to The Little Manitowoc Slough. Assorted waterfowl were found and the group carefully combed through Lesser and Greater Scaup, Redheads, Buffleheads, Goldeneyes and we were eventually able to pick out an American Wigeon and a Pied-billed Grebe.

A handful of us decided to head a little further north and arrived in Two Rivers around 1 p.m. The temperature was now 55 degrees and the wind had picked up a little bit. We walked down behind The Susie Q Fish Market to observe a group of gulls sitting on the ice. We had some nice finds here. Three Glaucous Gulls gave some good looks, particularly one who flew quite near the group and using the wind hovered closely above us. A juvenile Iceland Gull (Thayer’s) was also present. An interesting find was a hybrid of a Herring X Great Black-backed Gull, often referred to as a “Great Lakes Gull”. 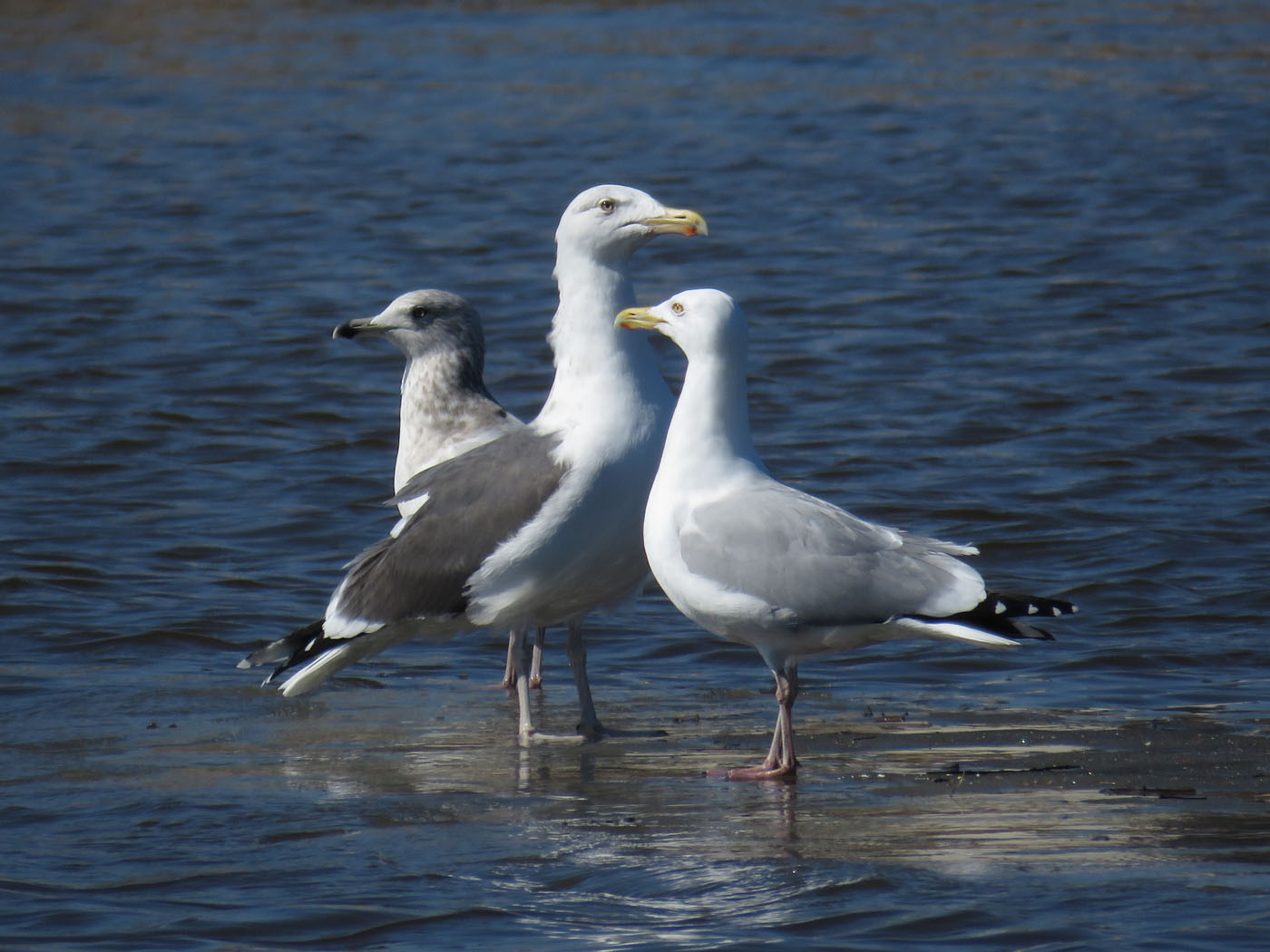 We concluded our trip around 1:30 happy to add a few more gull species to our list for the day. Thanks to all of those who attended and to Tom Schultz and Jeff Baughman for helping lead the trip. Enjoy the migration, the best is yet to come. Good Birding!