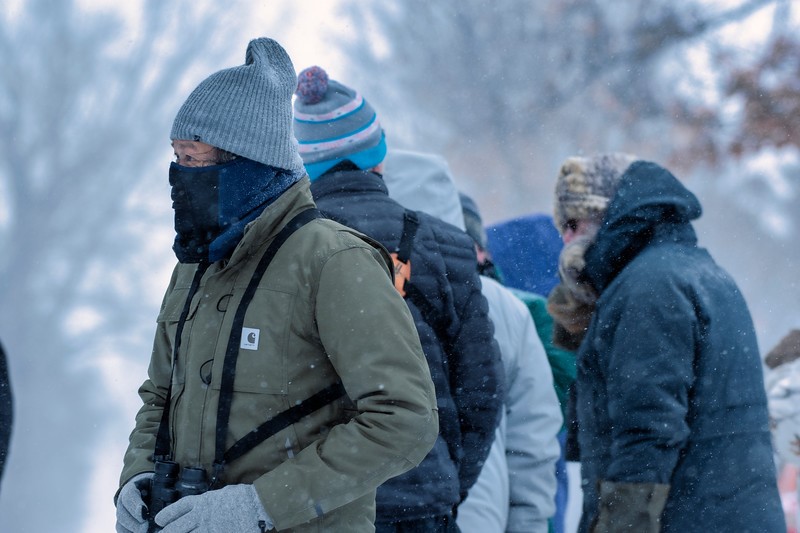 On Saturday, February 13, a group of fifteen, brave birders met in the Buena Vista Grasslands at 8 a.m. Temperatures averaged about –6 degrees and light snow was falling for much of the trip. Adam Knueppel, Tom Schultz, and Jeff Baughman led the trip. The wide-open grasslands, accompanied by northwest winds averaging 8-15 mph, and cloudy skies made for a frigid outing and tough conditions. 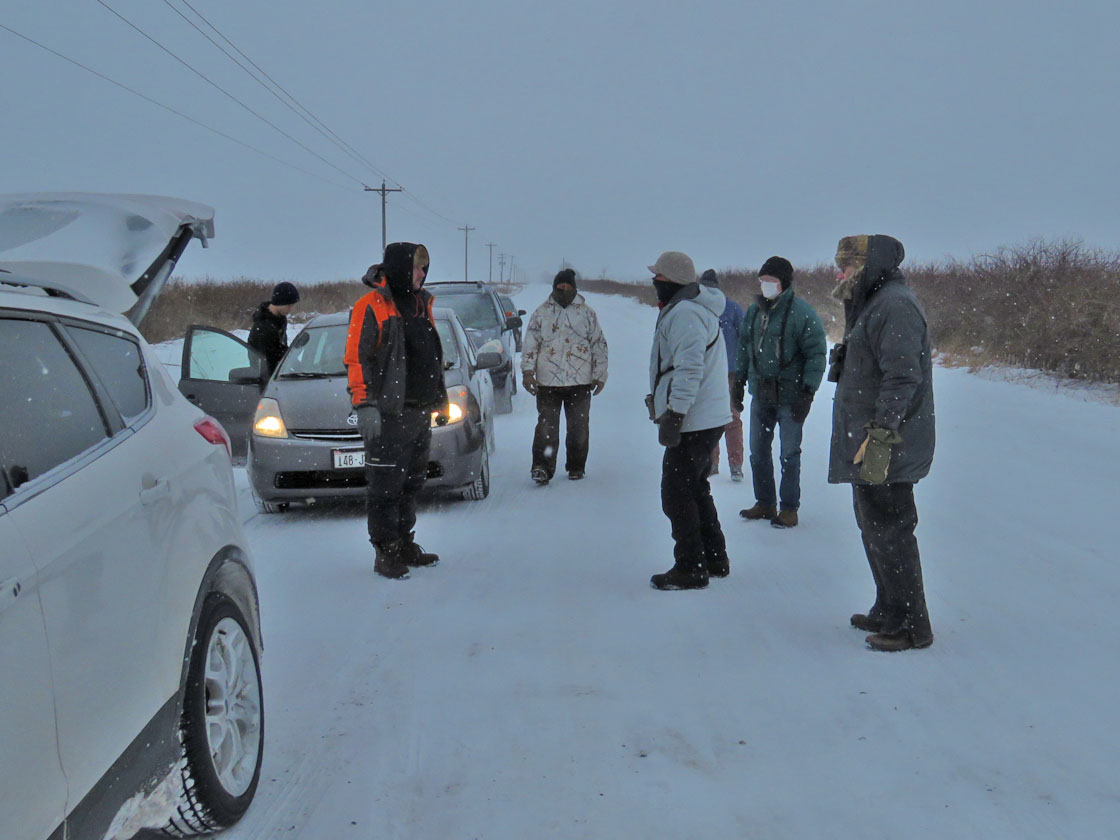 Prior to the meeting time, we were alerted by an early arriving group member to a flock of Greater Prairie-Chickens and a Northern Shrike near Elm and Mill Road. We decided to head over to the location and were happy to find around 40 of the Greater Prairie-Chicken, the Northern Shrike, and an American Crow. 8 a.m. was drawing near so we headed back to the meeting spot on Taft Road, just north of Hwy W.

At the meeting spot, we took a roll call and made some introductions. Travel conditions were not ideal, and a few participants were running a little late. While waiting for them to arrive, a different car full of participants had mentioned a nice flock of Greater Prairie-Chickens were spotted feeding in a field on Hwy W just east of our meeting spot. We decided to check this spot out with the whole group, and everyone on the trip was able to see over 50 of them. 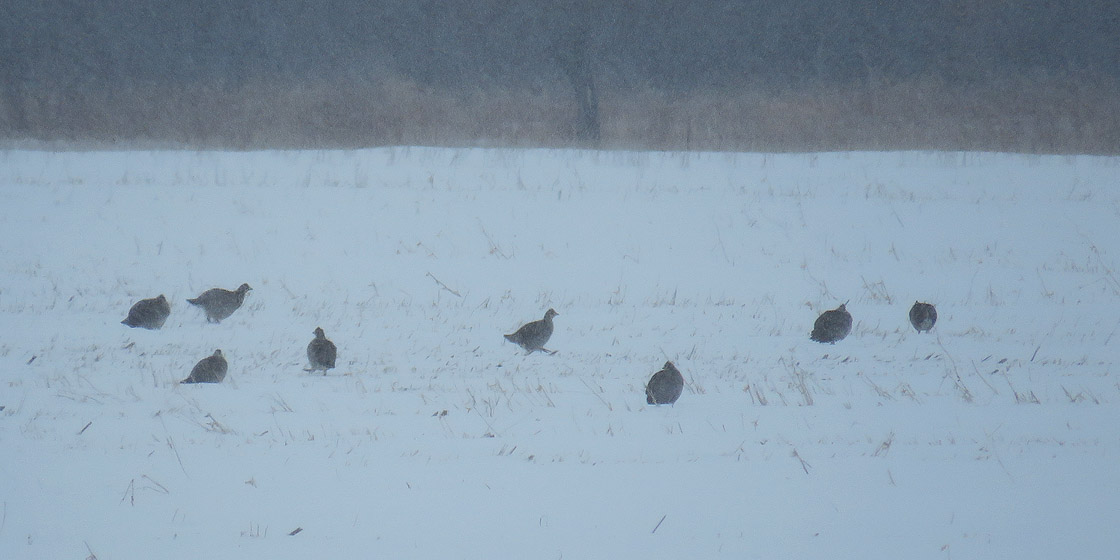 Just before 9 a.m. we headed down Lake Road and were able to locate another large flock of a target species, around 80 Common Redpoll. Initially feeding very close to the road, these flighty birds took off before any real good views were allowed. At first, some folks at the end of the caravan were not able to see them at all, however the flock made three or four quick moves and all attendees were able to get some distant looks as well as some views in flight. 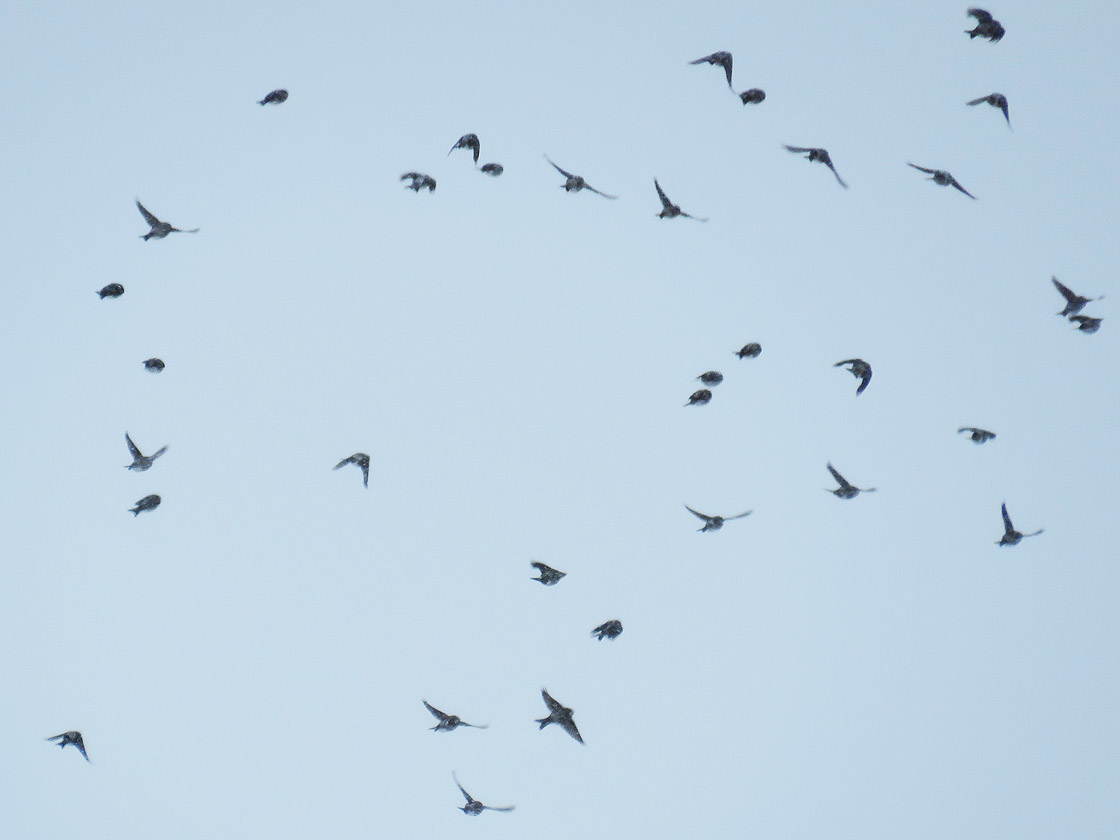 Our next stretch included a section of Hwy W from Townline Road to Elm Road in hopes of some raptors, or perhaps the Golden Eagle that had been reported in the days leading up to the trip. Overcast skies and limited visibility made for tough viewing of birds of prey. Unfortunately for us, not a single raptor was found in the Grasslands.

We moved on to some feeders that are typically productive on Elm Rd. Here we were able to add some more species to the day’s tally. Typical winter feeder birds were found, including Mourning Dove, Blue Jay, Black-capped Chickadee, White-breasted Nuthatch, American Goldfinch, American Tree Sparrow, Dark-eyed Junco, and Northern Cardinal.

From here we headed down Swamp Road where we had little luck, although a few more American Tree Sparrows were observed. We proceeded to Townline Road en route to another known feeding station that is a traditional stop on this trip. Here we were able to add some woodpeckers-including Red-bellied, Hairy, and Downy. With the group gathered, we talked about our next option. It was only 10 a.m. and the day had seemed long already. We decided against visiting Necedah and asked if participants wanted to call it a day or check the open water at Petenwell Dam. Interest varied, with some wanting to explore the grasslands in search of Horned Larks (which they found), some ready to call it a day, and most wanting to check out the dam.

After giving our thanks, saying our goodbyes, and giving our good lucks, the caravan pushed on to Petenwell Dam. A deer carcass on Hwy 73 had a Common Raven feeding on it, which some at the front of the caravan were able to see.

We arrived at Petenwell Dam around 11 a.m. The water below the dam was open, but was giving off lots of steam. A flock of Mallard were just visible through it. Common Goldeneye and Common Merganser were the other two waterfowl we were able to find in the open water. A few Bald Eagles made their presence and another Hairy Woodpecker. 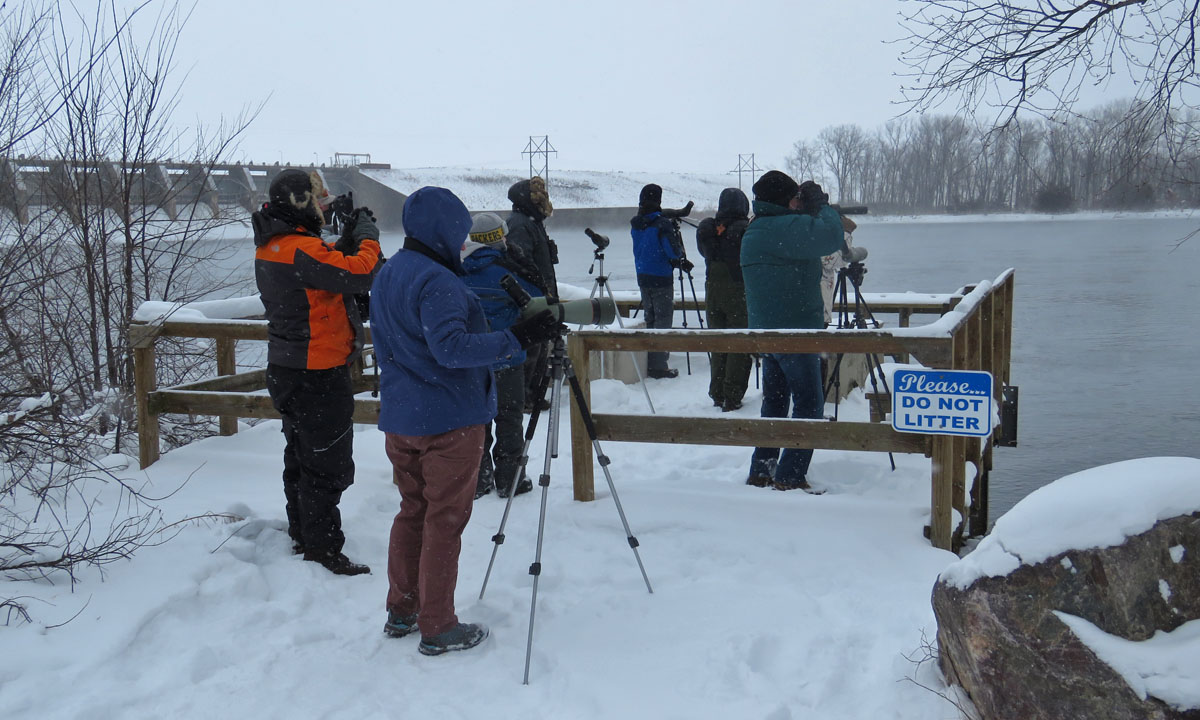 Birding at the Petenwell Dam. Photo taken by Tom Schultz.

Around 11:30 we wrapped up the morning. Inadvertently, a sort of question/answer session developed, accompanied by other participants ecological musings- a discussion all in attendance enjoyed. Although the conditions were not ideal, we made the best of the trip and were able to check off some of our target species. Thanks to Tom and Jeff for helping lead this trip.