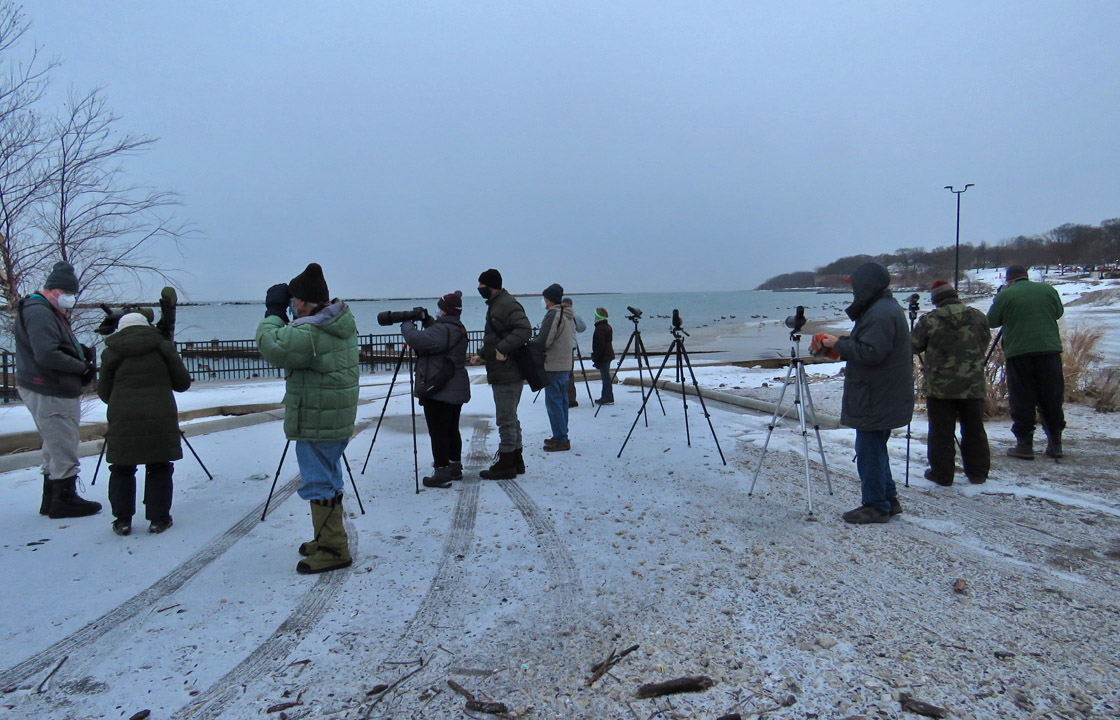 Our group met at South Shore Yacht Club around 7:30 AM on Sunday, January 17. Light flurries were falling from time to time, but the temperature was pretty mild for mid January – right around 30 degrees – and the NW wind was fairly light. The 19 attendees had all pre-registered via the WSO website, and the group was led by Tom Schultz, Jeff Baughman and Adam Knueppel – the new Field Trips Committee chair! Everyone was required to wear a COVID mask.

One of the first birds we detected was a little bird that was hopping along the sidewalk near the water – and we were surprised to see that it was a Swamp Sparrow! Mallards and Canada Geese were swimming just offshore, and several Ring-billed Gulls were loafing on the nearby beach. Other ducks present were Red-breasted and Common Mergansers, Common Goldeneye, a couple groups of Redheads, and a couple of American Coots were also spotted. The highlight was an adult Peregrine Falcon that passed overhead, and then was later spotted sitting on one of the dock posts, busily consuming its breakfast. 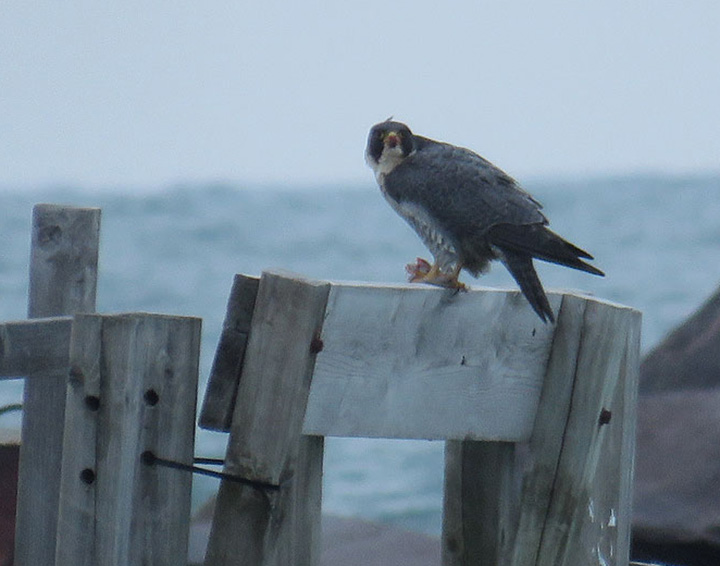 Around 8:30 we headed over to the Milwaukee Lake Express Ferry Terminal to check for waterbirds. Quite a few gulls were perched along the concrete breakwater, and we noted that two of them were very large and much darker – Great Black-backed Gulls! A number of ducks were present there, including several Buffleheads, and a Horned Grebe was also spotted. 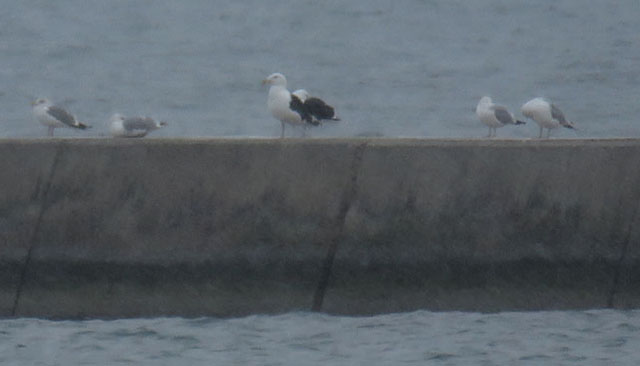 From there the group drove over to the mouth of the Milwaukee River, where we scanned and scoped the harbor, which was entirely open (unfrozen). Unfortunately there weren’t a lot of birds present – and they were species we’d found previously, so we continued on to McKinley Marina. A nice flock of gulls was standing on the ice there, mostly Herring and Ring-billed, but soon someone spotted an adult Lesser Black-backed among them. A little while later, an adult Iceland Gull (Thayer’s type) was found, standing almost right next to the other bird! Some ducks were present, but they were more of the same. 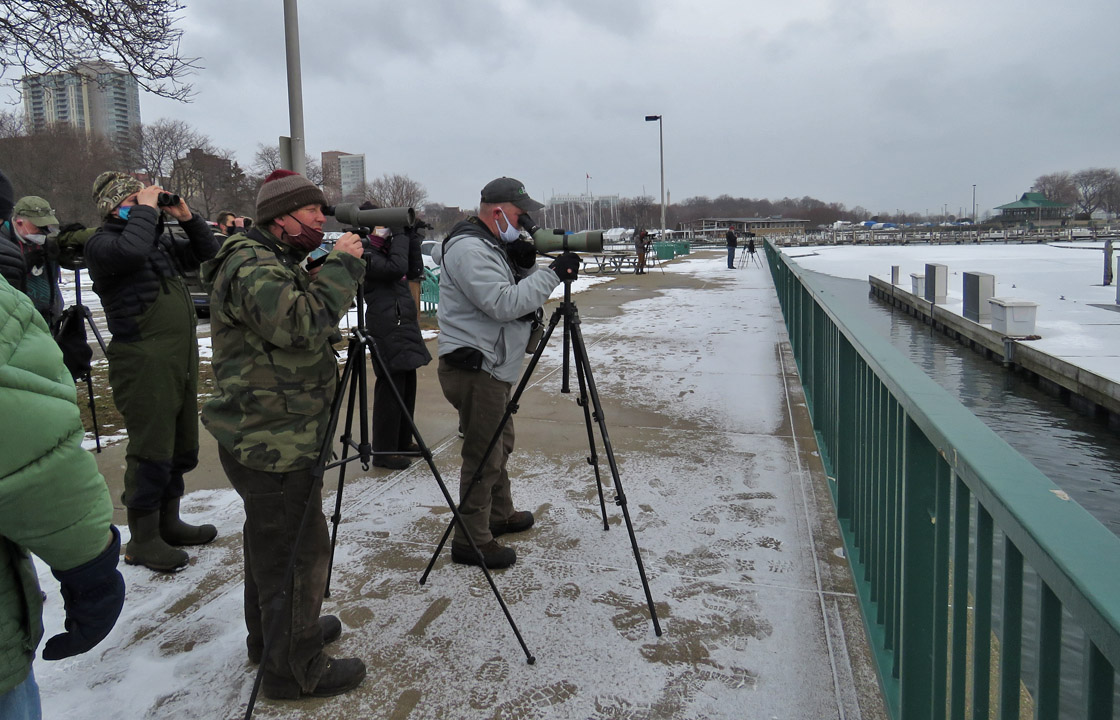 The next stop was the North Point Snack Bar parking lot, where a nice raft of ducks was swimming offshore. Most of them were Common Goldeneye, but suddenly an adult male White-winged Scoter was spotted! It was out a ways and among the other ducks, and was diving frequently, so it was challenging to get looks at – but after a while it stopped diving, which made it much easier to get looks.

We continued up the shore to North Point, where another large raft was present – but this time they were mostly Greater Scaup. A few Lesser Scaup were spotted among them, along with a couple of Redheads. Also present were more Common Goldeneye and Red-breasted Mergansers, along with a few Herring Gulls.

Our next destination was Port Washington, initially at Coal Dock Park. One of the first birds we spotted was the immature Laughing Gull that had been spotted here the day before. Mostly we observed it in flight, as it cruised back and forth across the harbor. Then an American Pipit was found, moving along through the grasses, and everyone rushed over to get a look. It sometimes flew from one area to another, but eventually everyone got a look. This was a real surprise for mid January! A few other ducks were spotted, included Hooded Merganser, and Ruddy Duck, along with more Mergansers and Bufflehead – but overall the harbor seemed pretty empty. 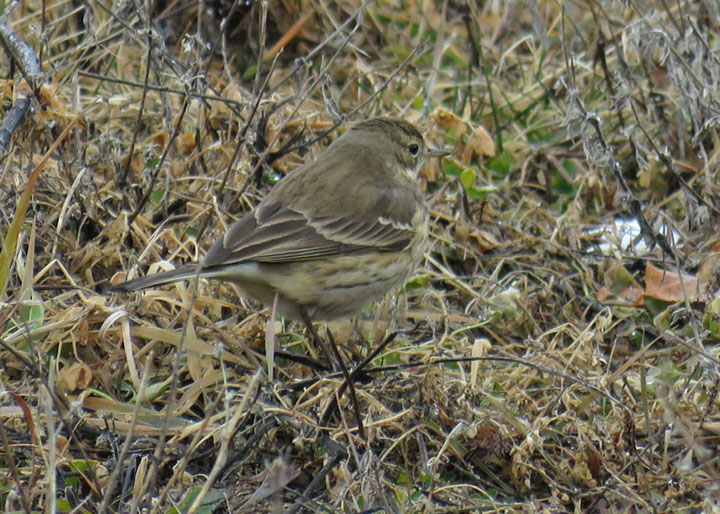 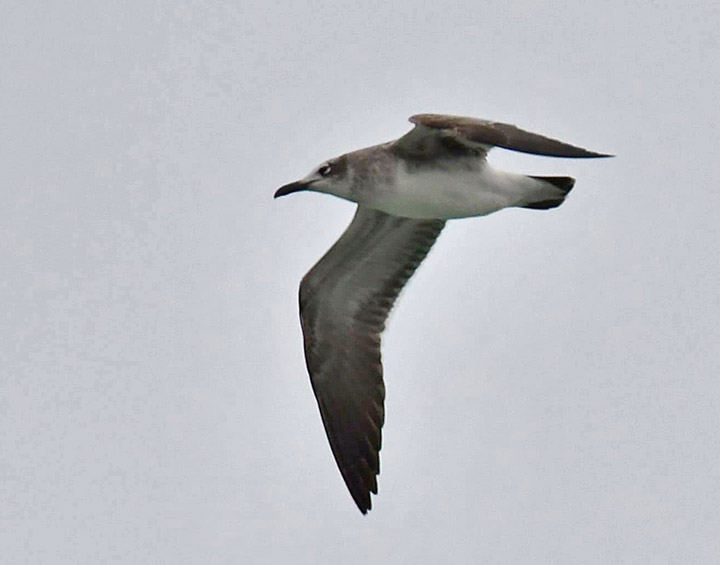 The group moved north to the other side of the marina, where a couple of beautiful male Wood Ducks were loafing among some Mallards. An immature male Harlequin Duck had recently been present in this area, and soon we were able to spot it – swimming, splashing, and preening not that far away from us, so it provided great viewing opportunities! 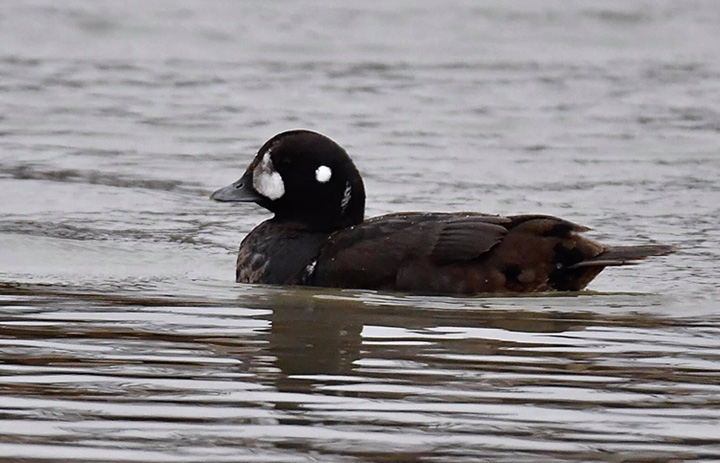 We decided to visit one more location – the Forest Beach Migratory Preserve – where White-winged Crossbills had recently been found. The group hiked along a trail that led through a grove of mature spruce trees, but unfortunately our target eluded us. A Northern Shrike, some crows, juncos and American Tree Sparrows were spotted, along with a Red-tailed Hawk, but otherwise we came up empty.

Thanks to everyone who participated in this fun day of birding, which wrapped up about 1:45 PM. Thanks to Jeff Baughman and Adam Knueppel who help lead this field trip.