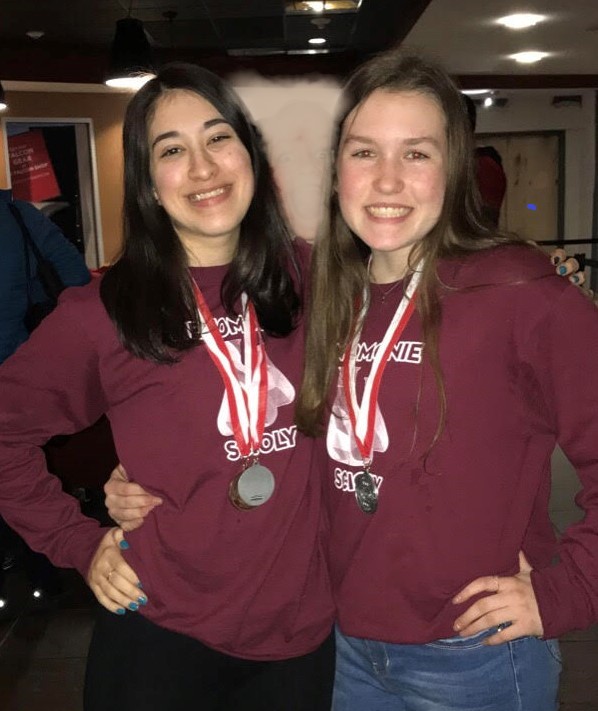 Jenna Castillo and Grace Hasse, juniors at Menomonie High School in Dunn County, with the Silver Medals they earned in the ornithology event of a nationwide scholastic competition called Science Olympiad.

Grace Hasse and Jenna Castillo are Super Heroes. They can’t sing like a thrush, cross the Gulf of Mexico by flapping their arms, or even fly. But they can tell you how a bird does those things… while the clock is running.

“Since starting the ornithology event last year, my fascination with birds has exploded,” said Jenna. “I love studying all the different types of birds and their ecology, showing me how diverse life can truly be. I’m glad I get the opportunity to participate in Science Olympiad.”

Jenna and Grace are both juniors at Menomonie High School, in Dunn County, Wisconsin, and teammates in the ornithology event of a nationwide scholastic competition called Science Olympiad.

“I got introduced to ornithology by my Science Olympiad coach Harold Vlcek,” Grace said. “Jenna and I first became partners at the River Falls Border Battle last year where we secured the silver medal, it was there we learned how well we worked together.

“From all the knowledge we’ve collected, our advisors have put us at a college understanding of the concepts of ornithology. We have discovered the behaviors of birds, their different diets, migration patterns, habitats, anatomical features, and even songs.”

“Sometimes the tests are easier if the author of them underestimates how knowledgeable Science Olympiad students are,” Grace explained. “However, usually the tests are written by graduate students, coaches or Science Olympiad alumni, so they tend to be quite challenging. At last year’s Belleville Meet we won gold and the percentage of our answers that were correct amounted to 50%. Plus, you only get 50 minutes to complete the test.”

“Some events let you use materials during the competition. We are allowed a binder and a field guide, and that makes it a little easier if you’ve put the effort in to create the binder of notes. Jenna and I are continuously adding to our notes after each competition, constantly bettering them for the next challenges we face.”

A total of 172 teams from 46 middle and high schools compete in Science Olympiad, in categories ranging from “Ping Pong Parachute” to “Food Science.”

“Menomonie has five teams,” Grace explained. “Maroon, White, Gold, Black and Aqua. Maroon is like ‘Varsity,’ White is ‘JV’ and so on.”

Grace’s grandmother, Mary Rassbach, has spurred Grace’s scientific – and perhaps competitive – nature, but says that, before the birds, came bugs.

“To begin with, around the age of 3, Grace was fascinated with insects,” said Mary. “Family members picked up on this interest and she was labeled a budding entomologist. As she aged, she became a 4-H member and many projects were devoted to bug collecting, pinning them to boards for spectators, with identification and detailed information about their makeup. I often helped Grace with materials, hints on signage, construction specifics as to design and audience appeal. I liked her blue ribbons and purple awards of excellence almost as much as she did!”

Like most competitions, Science Olympiad asks smart young men and women to prepare well, think on their feet, and deal gracefully with pressure.

Jenna concours. “I’m almost always a nervous wreck before going into any of my events. I worry a lot about not having prepared myself enough, and what I could’ve done differently in the days leading up to the competition. Although ornithology is my best event and I’ve done really well the past year in it, there is always that fear that there is a better team than you.”

Grace met one of the other Olympiad varsity ornithology teams – Rowan and Lukas, from Madison West – while participating at an all-day workshop at Wisconsin Point and Hawk Ridge back in September, during what WSO members – in non-pandemic years – call “Jaegerfest.”

“I could not believe that students from the school we always try to beat were standing on the same beach that I was, at the same time,” Grace said. “The coincidence was unreal, the fact that they also competed in two of the events that I did (Water Quality and Ornithology) was very strange.

“During the competition on Nov. 14th we beat them by four places. They took fifth. We’re ahead of them for now but they won’t back down without a fight. We’ve got to keep accumulating knowledge to come out on top at state this year.”

One of the girls’ winning strategies is to combine and conquer.

“Jenna and I work very well together as a team,” Grace said. “We split up the work, so she focuses on the ecology information and I focus on quick identification, diet and calls. Before we submit our exam, we check over each other’s answers and work together on the ones that stumped us.”

The teams’ informal nickname is “The Bird Nerds.” No shame in that. These girls love what they’re doing and are super at it.

“My goal whenever I’m competing is to do the best I possibly can with everything I’ve learned,” Jenna said. “I’m a very competitive person, and I want to place first, but I also try to have fun with ornithology. It’s important to me to not get too wrapped up with placements and remind myself that Science Olympiad is something I do for fun and to bond with friends. I take every competition as a learning opportunity to see where I have room for improvement, and better myself for the next tournament.”

So, here’s to super girls with super smarts, who, through hard work, will go far: To infinite knowledge, and beyond.…
“I can’t wait for state this year at UW-Stevens Point on April 16th and 17th to experience the most important award show of my Science Olympiad career, and test my ornithology knowledge,” Jenna said.

“Spending a day out in places where ‘real’ bird watchers meet was eye opening, Grace added, “because it showed me that this was something I could continue to pursue, be a part of for the rest of my life. It showed me that this new interest I’ve acquired doesn’t have to stop after I graduate high school.”

In conjunction with WSO, Betchkal wrote and produced Bird TV ("Bird Teaching Video"), a web-based educational resource for use by schools, nature centers, bird clubs and community members free of charge. The topics covered in the various episodes are diverse, informative, sometimes humorous, and always stocked with beautiful imagery. Check it out at https://wsobirds.org/bird-tv.