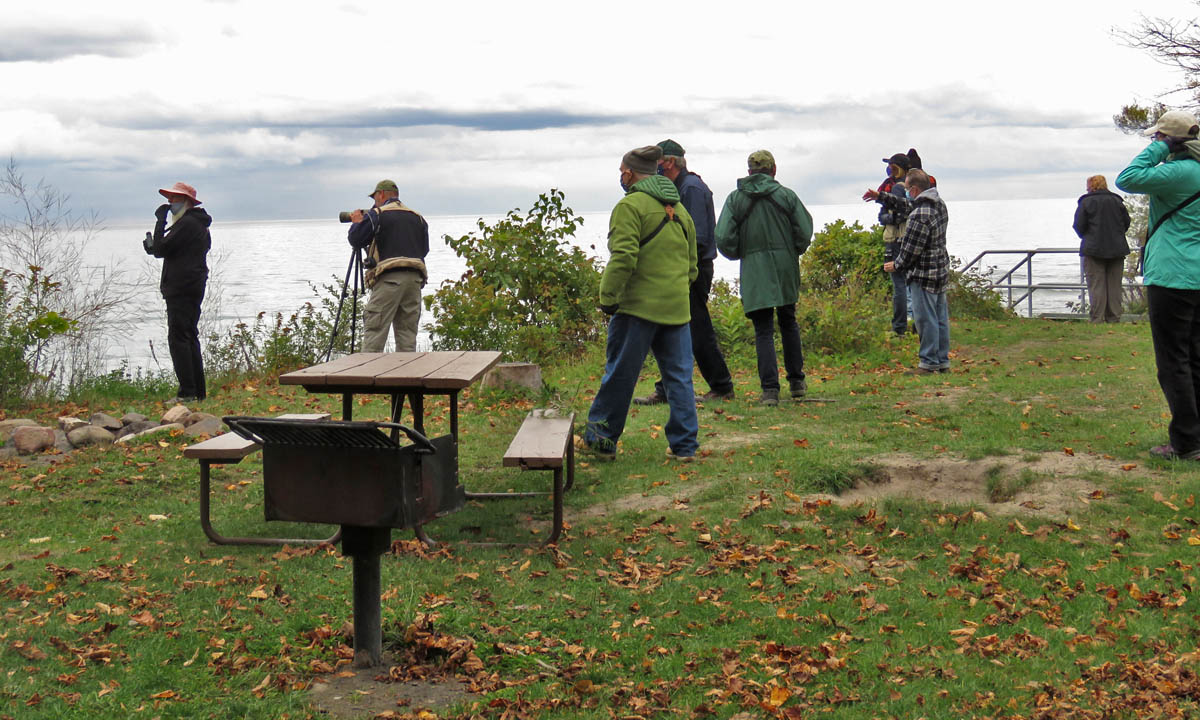 It was a chilly morning on October 3 as registrants began arriving at the lower parking lot at Harrington Beach State Park, around 43 degrees. Unfortunately, the winds were calm – which is not what you want for a hawk migration. Arriving registrants were all wearing masks, a requirement for attending field trips during COVID, and we gathered to take attendance and give a few announcements about our plans for the morning. 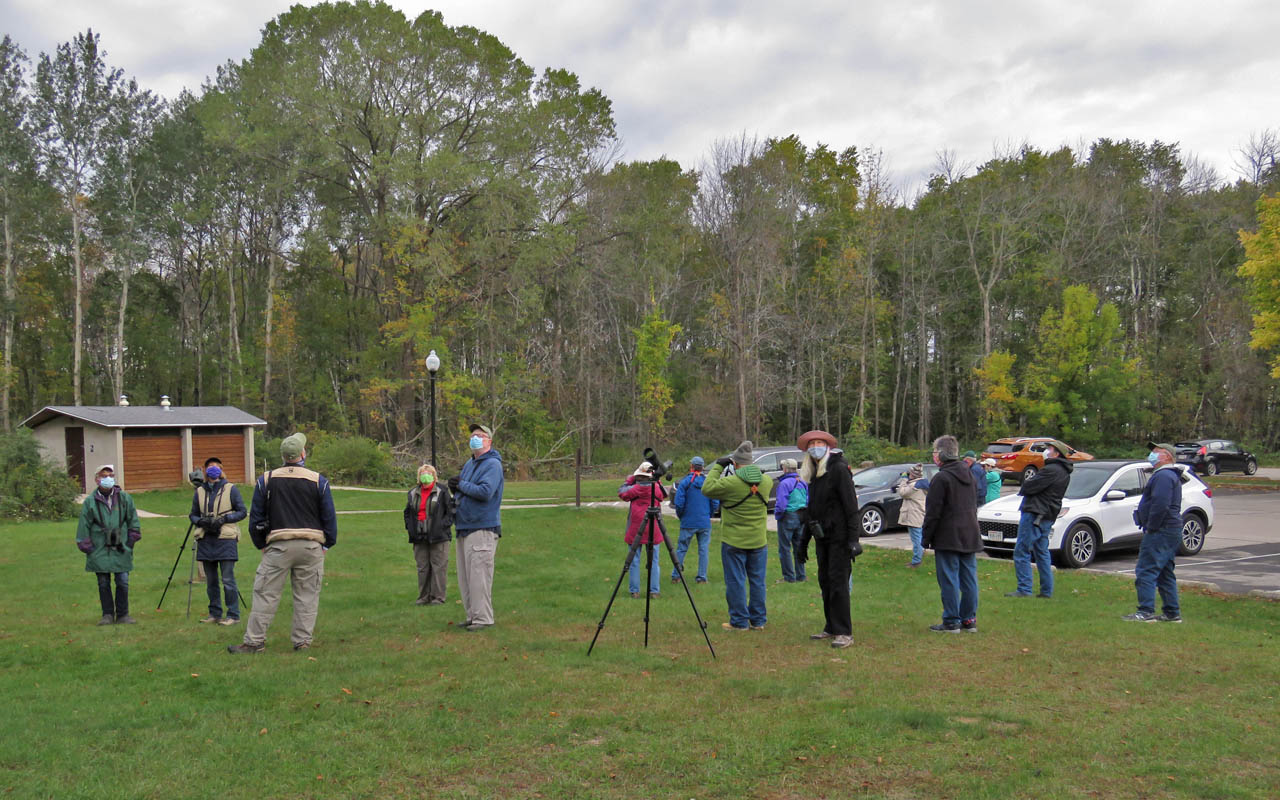 Nice-sized flocks of PINE SISKINS were periodically passing overheard, and the birds sometimes alighted in the tops of tall bare trees – providing us with better looks. RUBY-CROWNED and GOLDEN-CROWNED KINGLETS were spotted, along with a dozen or more DARK-EYED JUNCOS. A few WHITE-THROATED SPARROWS were also present.

At one point a MERLIN made a pass just above the trees to the east – heading north. Unfortunately this was one of the very few raptors that we saw this morning. Several COMMON LOONS also passed over us there – fairly high, and also heading north. RING-BILLED GULLS flew over periodically, and both WHITE-BREASTED and RED-BREASTED NUTHATCHES were spotted.

After about 30 minutes the group started walking south down the main access road, and encountered more KINGLETS, YELLOW-RUMPED and NASHVILLE WARBLERS, and a lone EASTERN WOOD-PEWEE that was sallying out from several dead trees. A male PURPLE FINCH was spotted, but unfortunately it soon flew off.

We worked our way down to the Lake Michigan shore. The lake was very calm, which made it easy to scan the flat waters. We soon noticed that quite a few HORNED GREBES were present – at least 25 – as well as a few COMMON LOONS that were pretty far offshore. RING-BILLED and a few HERRING GULLS were also present, along with some fly-by groups of RED-BREASTED MERGANSERS.

Next we moved to the area near the little point that juts into Lake Michigan, and we were surprised to see how much shore erosion has taken place with the high lake levels the past couple of years! We found several YELLOW-RUMPED WARBLERS there, as well as a BLACKPOLL and a PALM, and we also had great looks at a PHILADELPHIA VIREO that was feeding in some of the fallen trees. A few SWAINSON’S and HERMIT THRUSHES were also spotted nearby. 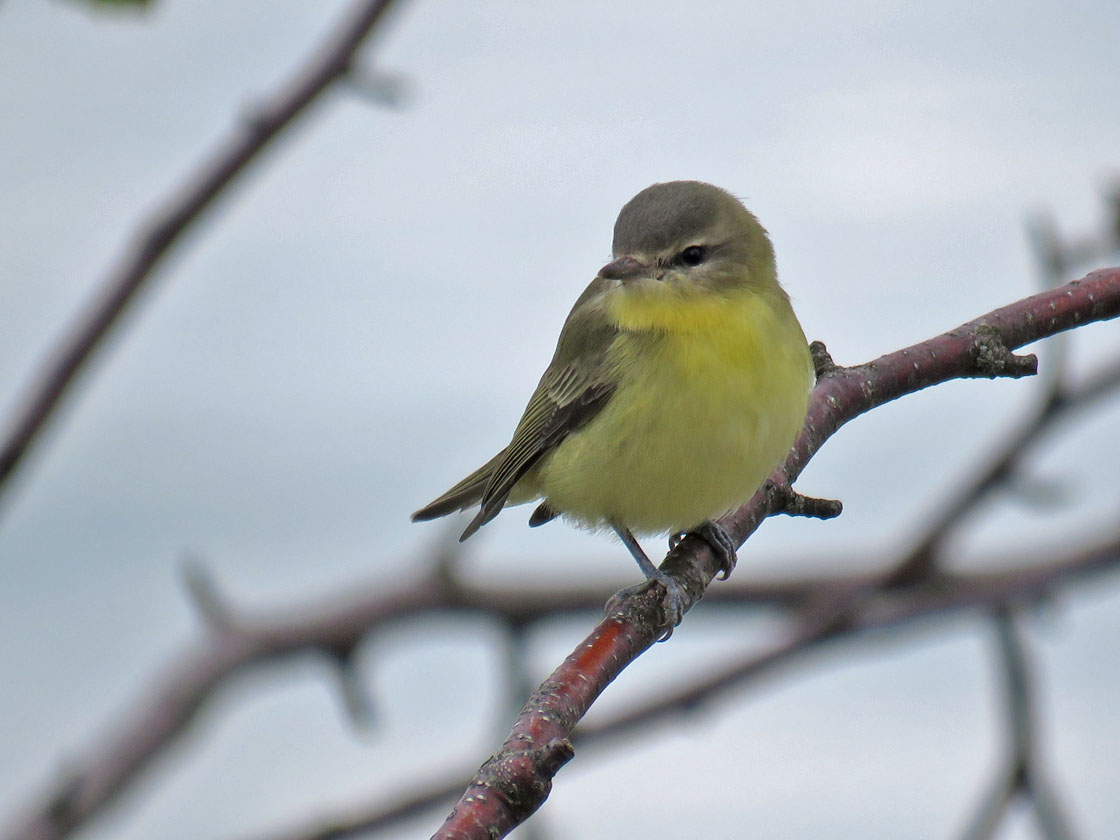 We gradually worked our way back to the parking area, and then drove to the lot adjacent to Puckett’s Pond. More JUNCOS were observed there, along with a few WHITE-THROATED and WHITE-CROWNED SPARROWS, and several YELLOW-BELLIED SAPSUCKERS were working the trees. A few KINGLETS of both species were spotted, and also a few more WARBLERS, including another NASHVILLE. 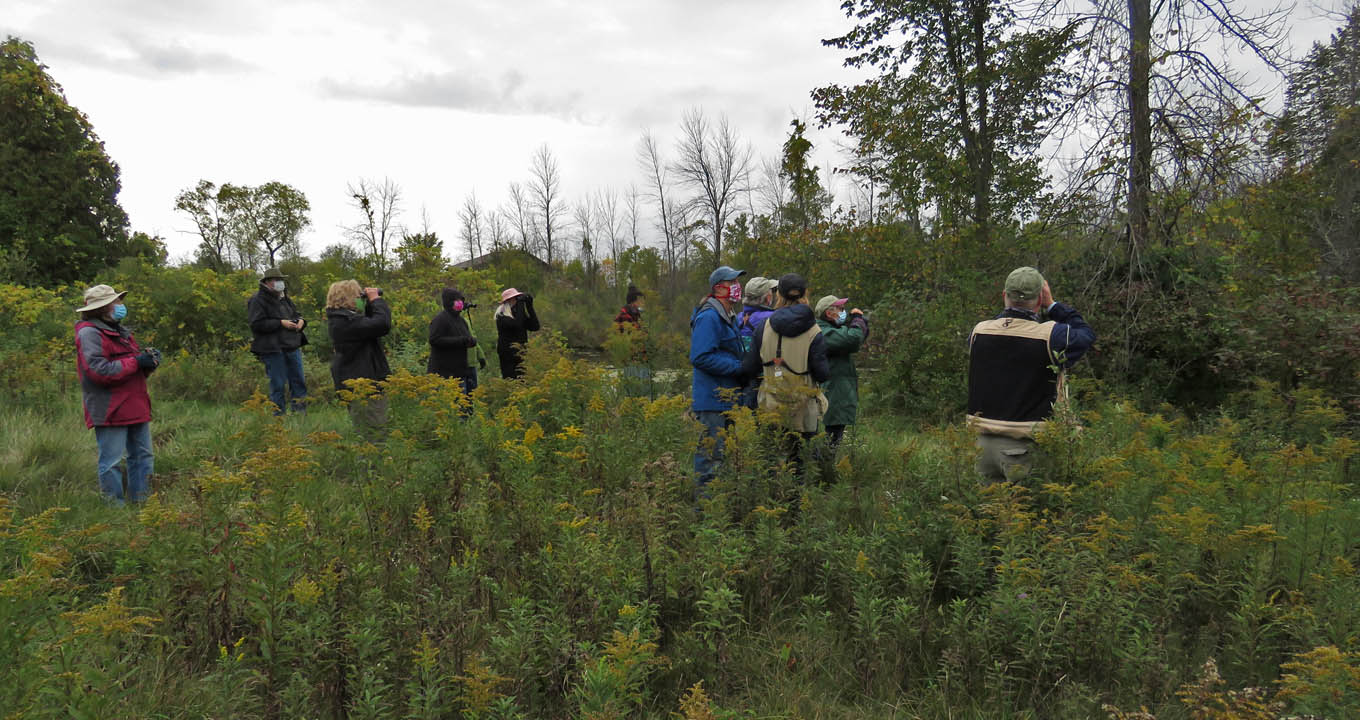 A GRAY CATBIRD called from the nearby shrubs, along with an EASTERN TOWHEE – which later popped into view for a time. A BALD EAGLE was spotted, along with a RED-TAILED HAWK, along with a several AMERICAN CROWS and a few ROBINS, but a very pleasant surprise was hearing a COMMON RAVEN giving its distinctive croaking squawks in the distance – an unusual record this far south!

Our next stop, now with a reduced group of 12, was at Forest Beach Migratory Preserve – just a few miles to the south. We arrived there about 11:15 am, and were greeted with a flyby EASTERN MEADOWLARK. We parked in the parking lot at the main building and walked north along the road to one of the main trails.

We decided to take the trail that heads west into a restored prairie that also had a few small wetland ponds mixed in. At the first pond, we had our first SWAMP SPARROW and a quick glimpse of a LINCOLN’S SPARROW. Here we also found a few WHITE-THROATED and SONG SPARROWS as well as more JUNCOS. Just beyond the pond, we had an EASTERN WOOD-PEWEE, BLUE JAY, GRAY CATBIRD, and a scolding SEDGE WREN. Shortly, we had both YELLOW-RUMPED and PALM WARBLERS, as well as RED-BREASTED NUTHATCHES, RUBY and GOLDEN-CROWNED KINGLETS flitting in the scattered conifers along the trail. 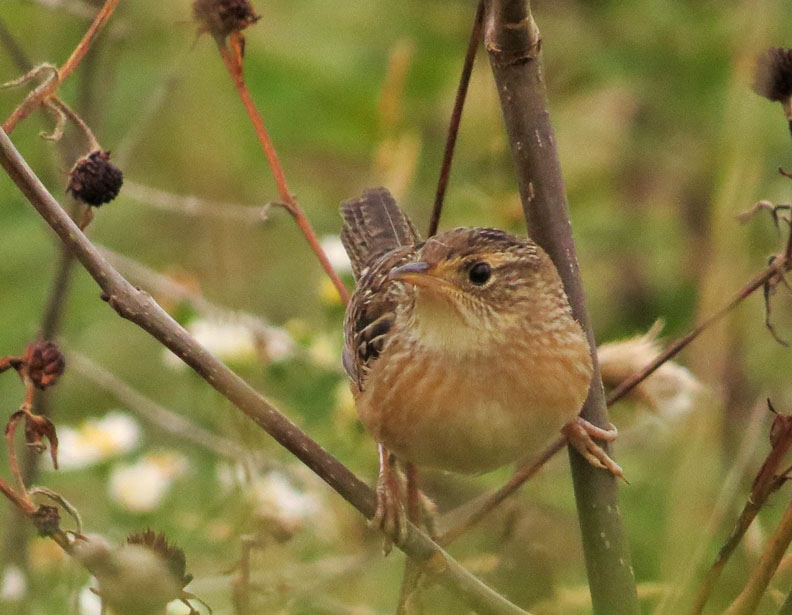 Near the second pond, where the trail splits north/south, we had SWAINSON’S and HERMIT THRUSHES, FIELD and SAVANNAH SPARROWS and YELLOW-BELLIED SAPSUCKER. A NASHVILLE WARBLER and ROSE-BREASTED GROSBEAK were also seen as well as better looks at a LINCOLN’S SPARROW or two.

We decided to take the trail that heads south of the pond. A short distance down the trail where there was a nice mix of conifers and scattered brush, where I decided to play my recording of chickadees scolding a predator. We were not disappointed, as it brought in a very nice mixed flock of birds.

As expected, several BLACK-CAPPED CHICKADEES led the charge, but were soon followed by several JUNCOS, RED and WHITE-BREASTED NUTHATCHES, YELLOW-RUMPED WARBLERS, WHITE-THROATED SPARROWS, and DOWNY WOODPECKER. Then an ORANGE-CROWNED WARBLER suddenly appeared for everyone to see, as well as a female-type INDIGO BUNTING. Then the bird of the day made a quick visit - a WHITE-EYED VIREO! Unfortunately, we only had a couple of brief looks – typical of the species – and only a few of us were afforded good looks. Needless to say, we were excited to add that species to our trip and annual list of birds. 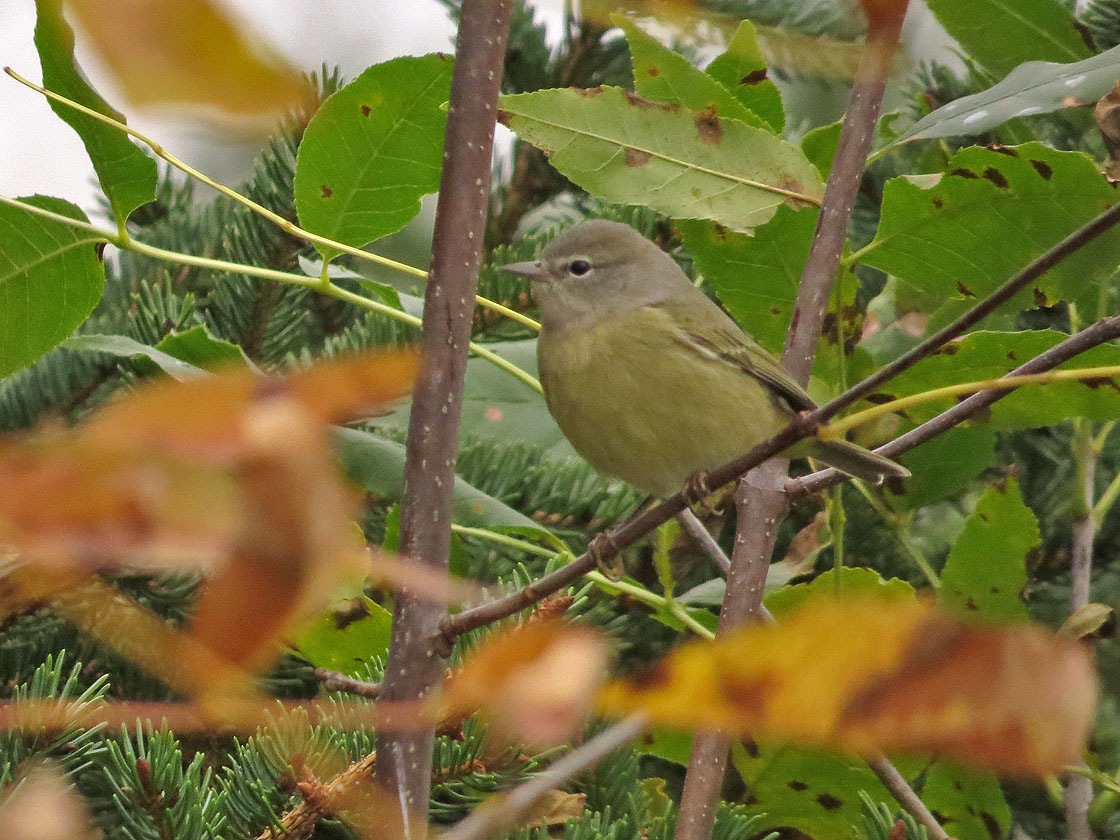 From here we headed back to our cars and ended the trip at about 12:30 pm. Our group list totaled 40 species from the Forest Beach Migratory Preserve, and we had a cumulative total of 60 species for the entire field trip. Thanks to everyone who participated! It’s unfortunate that we’ve had to limit our attendance during this time of pandemic, but hopefully that will change when life returns to normal.