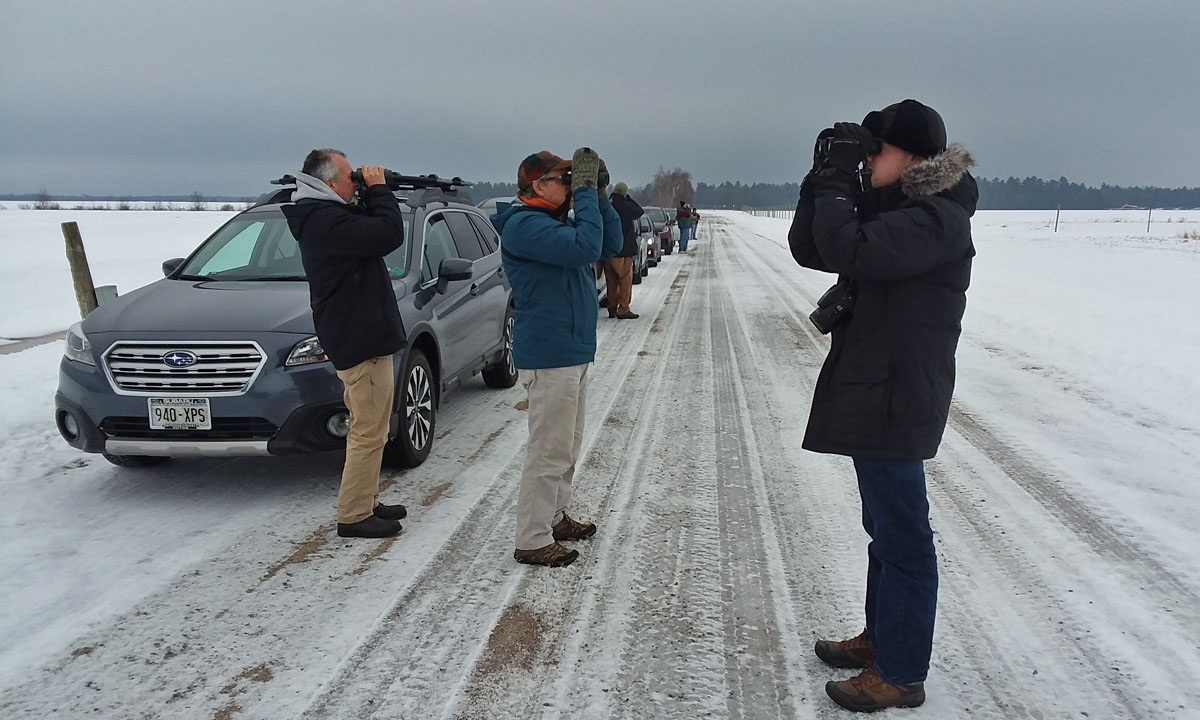 As our group gathered near the Buena Vista kiosk around 8:00 AM, the temperature was fairly mild for January – about 27 degrees.  There was a moderate wind out of the northwest, which brought a bit of a wind chill, but at least we weren’t dealing with severe cold.  The skies were overcast, and our group numbered about 20, with nine cars.

There wasn’t much bird activity near the kiosk, so our caravan moved out by about 8:15, heading east on Hwy. W toward Townline Road.  Near that intersection we had close views of a COMMON RAVEN, nearby several AMERICAN CROWS – and the differences between the two similar species were quite apparent.

We took Townline Road north to Lake Road, then headed east.  Some distance down the road we spotted a very white SNOWY OWL sitting on the snow, surrounded by sparse clumps of grass. After getting good looks at that beauty, we continued east, and not far away found a second SNOWY OWL!  This one was much darker, with lots of black barring on the feathers.  It was a bit more skittish than the first bird, even though the distance from the road was about the same, and it soon flew to over to a more distant fence post.  We had distant views of a GREATER PRAIRIE-CHICKEN up in a small tree, but it didn’t stay there long. 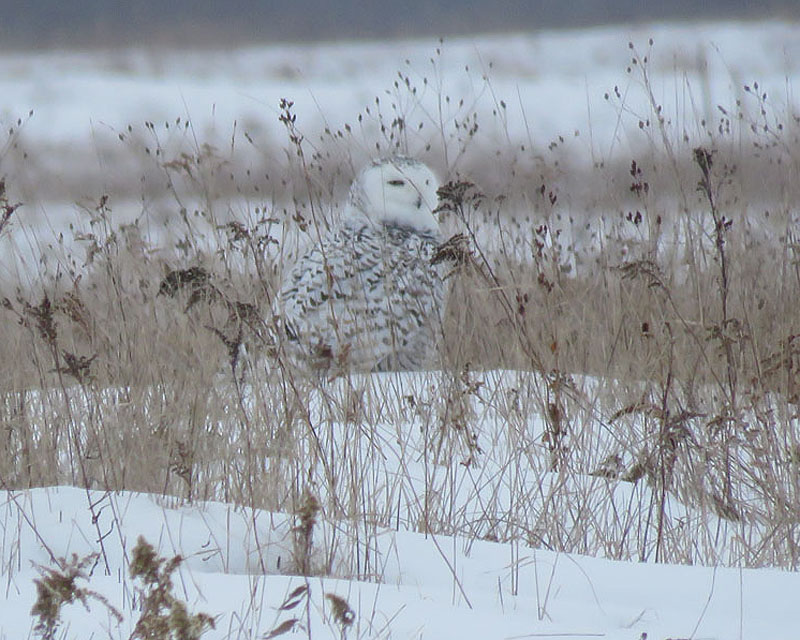 Just a little farther we suddenly spotted a group of about a dozen GREATER PRAIRIE-CHICKENS sitting right alongside the road about a quarter mile ahead.  We stopped the cars, hoping the birds would remain there while we got better looks, but unfortunately they soon took flight.   As the flock flew past us, we were now able to see that the group actually contained 21 birds – and now included some that had remained hidden previously.  We also spotted a NORTHERN SHRIKE along Lake Road, but it also soon took flight and disappeared in the distance. 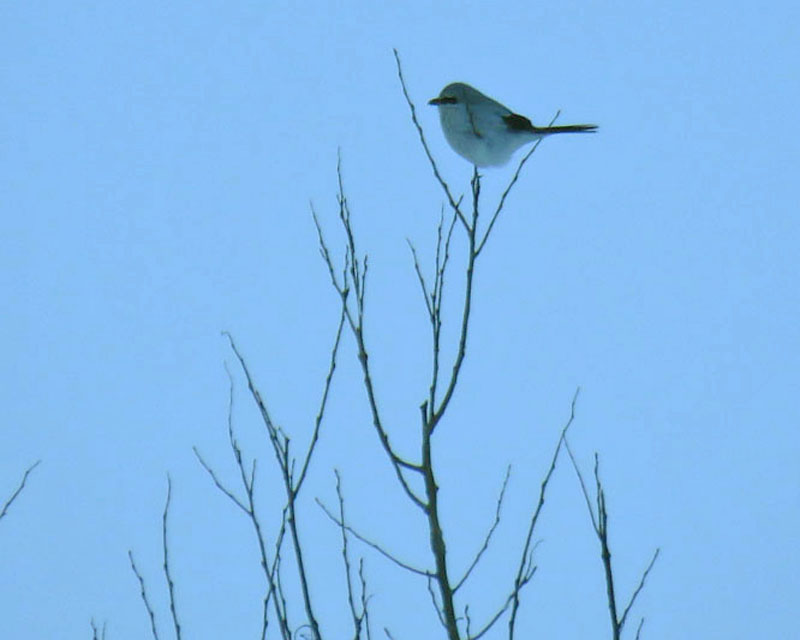 Reaching Taft Road we turned south, and then west on Hwy. W, along which we saw little but two ROUGH-LEGGED HAWKS – although they were both perched fairly close to the road and provided good looks.  At Townline Road we headed south.  As we drove we didn’t see much but BLUE JAYS and a few EUROPEAN STARLINGS, along the way – and also another ROUGH-LEGGED HAWK.

Down a few miles we stopped in front of a home where several feeders are traditionally present, and we weren’t disappointed.  While there, we saw MOURNING DOVE, BLACK-CAPPED CHICKADEE, WHITE-BREASTED NUTHATCH, DARK-EYED JUNCO, and four species of woodpeckers.  DOWNY, HAIRY and RED-BELLIED were near the feeders, but a RED-HEADED was spotted flying to some nearby trees.  It flew several times, but never provided good looks (but fortunately we were destined to see more later in the day).

From there we soon headed west on Tower road, which we took to Hwy. 73 toward Nekoosa.  Following a stop at a gas station, we continued across the Wisconsin River, then on toward Hwy. 173 and Babcock.  Near Sandhill Wildlife Area we took Ball Road to the west, but this wild area was mostly devoid of birds – except for a few BLUE JAYS.

Reaching Cranberry Road we turned south, and soon spotted another NORTHERN SHRIKE long the road, followed soon by another ROUGH-LEGGED HAWK. We turned west onto N. Bear Bluff Road and drove through wooded areas until the landscape opened up to cranberry bogs, and Bear Bluff was in view to our west.  We had hoped to find a Golden Eagle there, but unfortunately the cloudy skies were not conducive to soaring, so we weren’t able to spot one.

BALD EAGLE and COMMON RAVEN were seen, along with a large group of SNOW BUNTINGS on the gravel roadway and wheeling around over the snowy fields – perhaps more than 100!

Reaching Mather, we followed Hwy. H to the south, seeing mainly AMERICAN TREE SPARROW and DARK-EYED JUNCO along the way, along with more BLUE JAYS and another ROUGH-LEGGED HAWK. At Hwy. 21 we turned east, and to the Headquarters Road for Necedah National Wildlife Refuge.

We checked out a fairly open area that had tall, scattered Red Pines, and found several RED-HEADED WOODPECKERS present.  Some in the group thought they heard an EASTERN SCREECH-OWL calling, but unfortunately we weren’t able to confirm a location.  The bird feeder at the Necedah Refuge headquarters were attracting a nice group of BLACK-CAPPED CHICKADEES and a variety of WOODPECKERS, and another RED-HEADED was present in nearby trees.

Our final destination was the Petenwell Dam, where about a dozen BALD EAGLES were in view, and several COMMON MERGANSERS observed swimming on the river.  Other than that, only a few BLUE JAYS and AMERICAN CROWS were present.  We wrapped up the field trip about 2:15, still at only around 28 degrees.  Thanks to everyone who attended and to Jeff Baughman for co-leading.