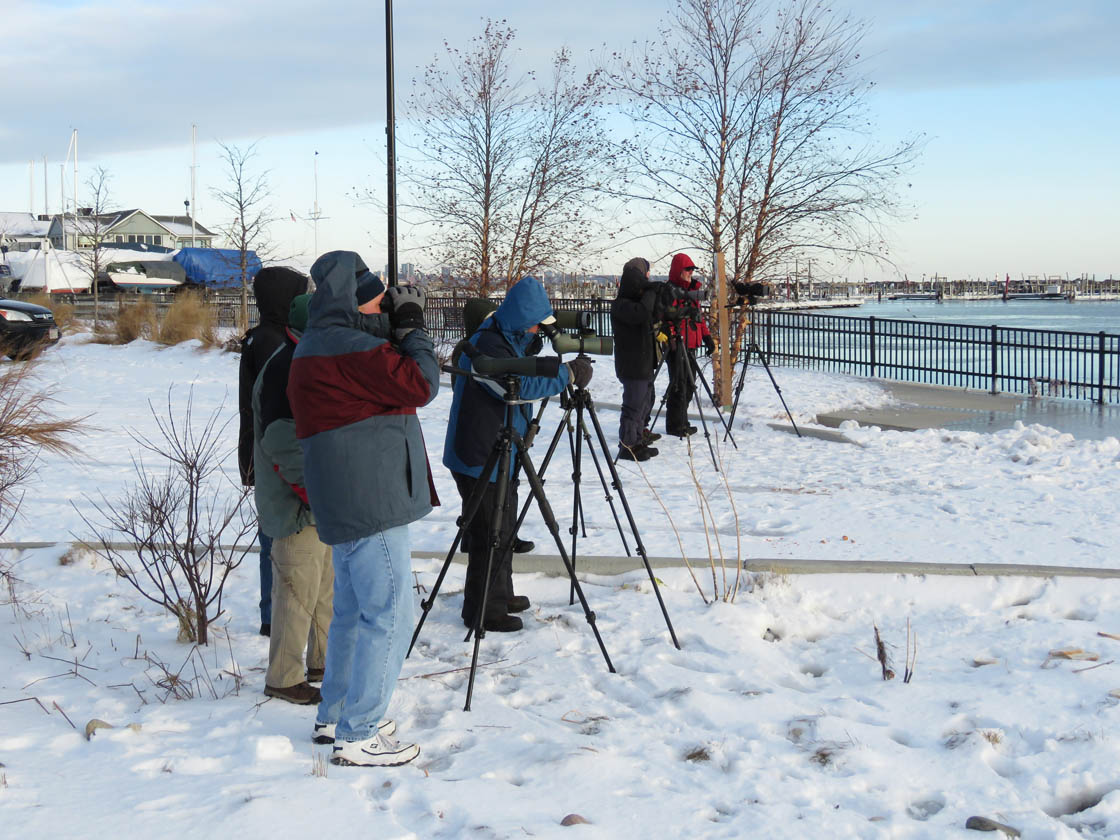 Following two weather cancellations due to forecasted snow events, we finally got this field trip off!  Unfortunately, the eventual date brought much colder weather, with a strong northwest wind producing a nasty, subzero wind chill.

Despite the 8 degree morning temperatures, a number of us gathered at South Shore Yacht Club at 8:00 AM – although the group was much smaller (about 18) than we’ve had in the past with better weather conditions.  The water in the marina was mostly open, but there were some patches of ice floating here and there.  We could easily see the sections of rocky seawall that had been damaged during the recent storms, with sections of the wall now missing.

A variety of waterfowl was present, including Common and Red-breasted Mergansers, Common Goldeneye, Greater Scaup, Bufflehead, Canada Geese and Mallards.  A lone Long-tailed Duck was spotted among the ducks, and it provided decent views between frequent dives.  A number of Herring Gulls were also observed, along with a lone Glaucous Gull that showed up for a short time. 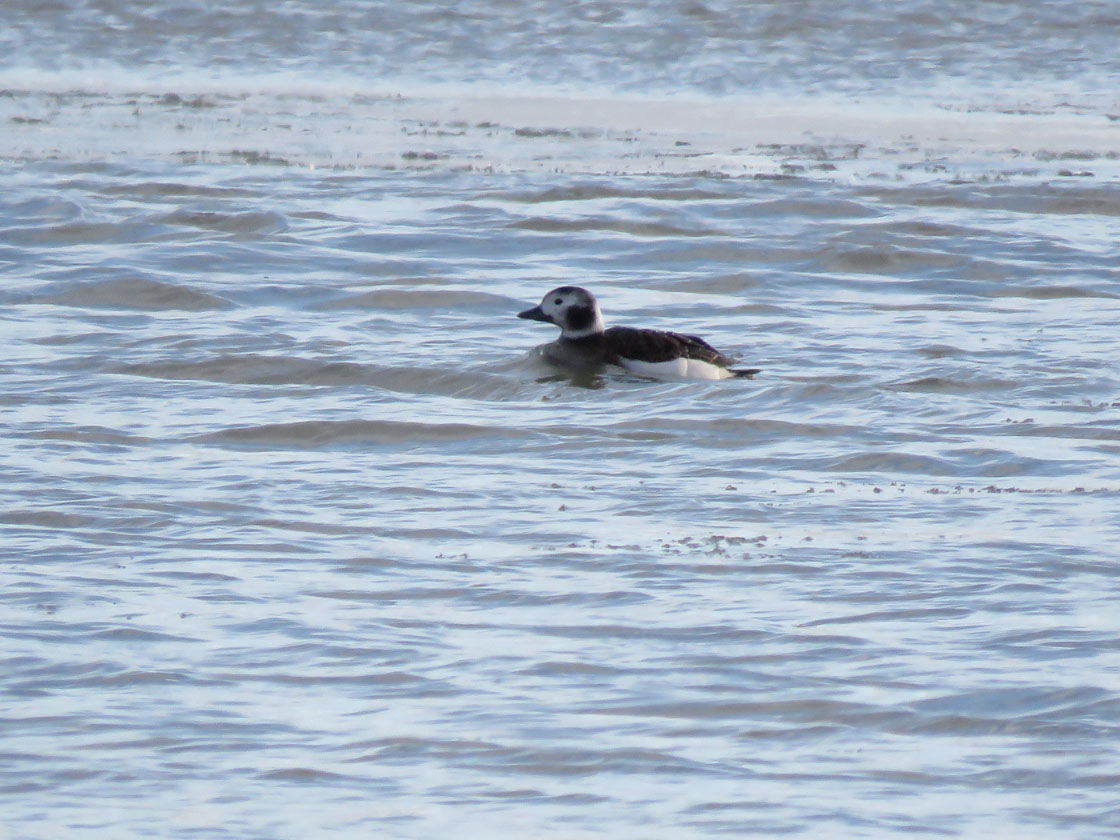 Around 8:30 we moved a short distance north to the Milwaukee Lake Express Ferry site, where many of the same ducks were present.  Our group was able to spot three Great Black-backed Gulls, as well as a Glaucous, and a number of Herring Gulls. 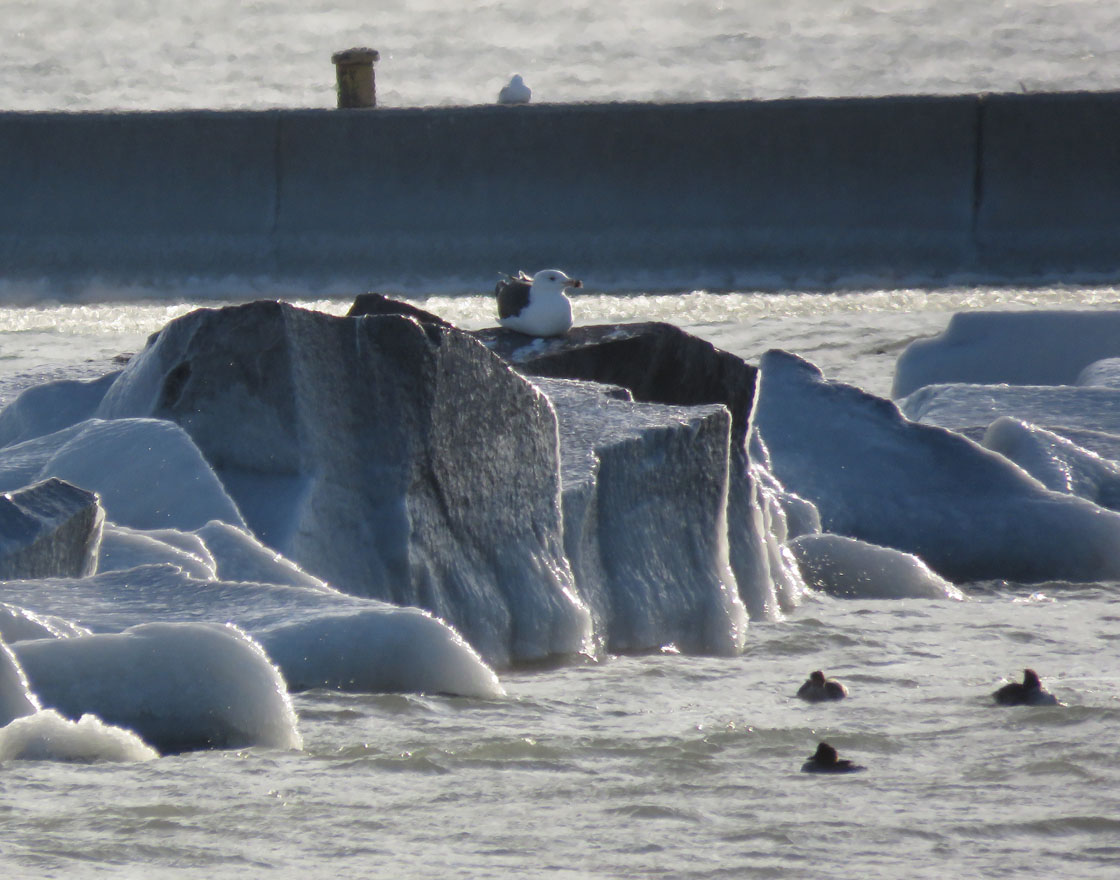 Our next stop was Veteran’s Park (McKinley Marina), where a huge raft of Greater Scaup was swimming in the harbor.  Also present were Common Goldeneye and several Common Mergansers, along with more geese and gulls.

From there we headed north up the Milwaukee lakefront to the area near the North Point Snack Bar – where more damage to the rocky shore was apparent – with huge boulders now moved or missing, and part of the parking lot now eroded away.  More diving ducks were present offshore, although fewer than elsewhere – but we did spot a Ring-billed Gull swimming offshore.

We moved just up the shore to the area near the Linnwood Water Treatment Plant.  A nice group of Buffleheads was present (about a dozen), along with more goldeneyes and Red-breasted Mergansers.

Our next destination was Port Washington, at Coal Dock Park – where we arrived about 10:20. The most obvious bird there was Canada Goose, with a few thousand present in the marina.  More diving ducks were present, and we were able to spot a few Redheads and American Black Ducks among them, as well as a lone Ruddy Duck.  The highlight there was finding a Red-throated Loon, and soon a second individual was spotted.  These two provided great views of their winter plumage, as they swam and dove in the harbor.  We were also surprised to spot an Otter swimming there also!  Our group then moved to the other side of the marina, where lots more Canada Geese were present, and a few other ducks were mixed in. 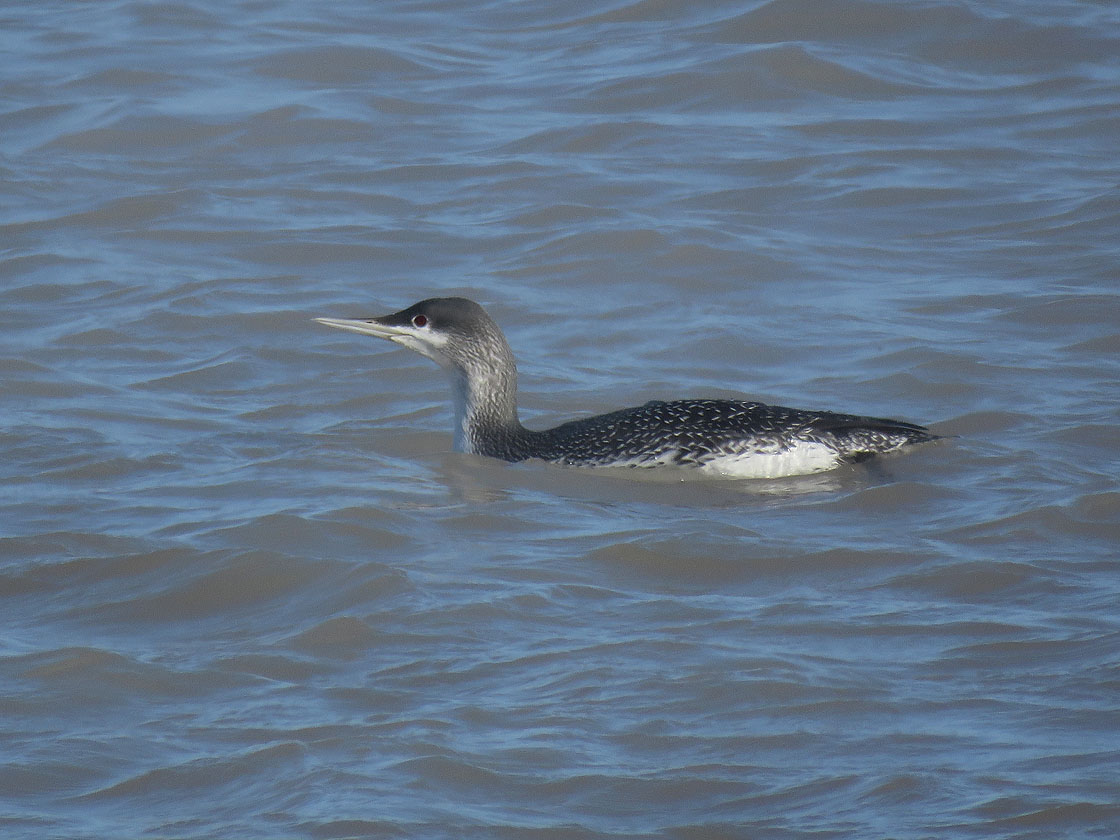 We headed north to Sheboygan next, and decided to stop at Indian Mound Park to look for Great Tits.  Unfortunately none appeared to be present, but we did find a nice variety of woodland birds, including Downy and Red-bellied Woodpecker, White-breasted and Red-breasted Nuthatch, Blue Jays, crows, chickadees, American Goldfinch, junco and cardinal.  A Red-tailed Hawk was also spotted, and a flock of Canada Geese passed overhead.

Next we drove to the Sheboygan Marina area – initially near the Blue Harbor side.  We spotted a Great Black-backed Gull loafing in the water, and then among a group of Herring Gulls, an adult Glaucous was resting on the ice.  More diving ducks were observed there, with a Bufflehead and another Long-tailed among them.

Our final stop was on the other side of the marina, near North Point.  Many of the same ducks were again present, but not much else was seen on the lake.  An adult Bald Eagle passed overhead, and Mourning Dove, American Crow, Black-capped Chickadee and Northern Cardinal were seen nearby. We wrapped up the field trip about 1:00 PM – with the thermometer now up to 25 degrees.

Thanks to the hard-core birders who attended this trip, and to Jeff Baughman for co-leading!