The Glossy Ibis discovery in August brought to 226 the total number of species confirmed as breeding in the state since 2015, some 13 of them new species documented breeding in Wisconsin since the last similar survey was completed in 2000.

“Finding a breeding Glossy Ibis here was definitely unexpected. It was a fitting end to data collection, and is a testament to the high-quality wetland habitat offered at Horicon Marsh and to the dedication of our hardworking volunteers,” said Ryan Brady, a Department of Natural Resources conservation biologist and science coordinator for the survey, known as the Wisconsin Breeding Bird Atlas II.

More than 2,000 volunteers submitted more than 2 million records of the different species and breeding behaviors they saw while scouring thousands of 3 x 3-mile survey blocks statewide.

“We could not have accomplished this without the amazing effort we saw from volunteer birdwatchers — we had almost 500 survey blocks to finish this year, but everyone stepped up and finished it off,” said Nick Anich, a DNR conservation biologist and WBBA II coordinator. 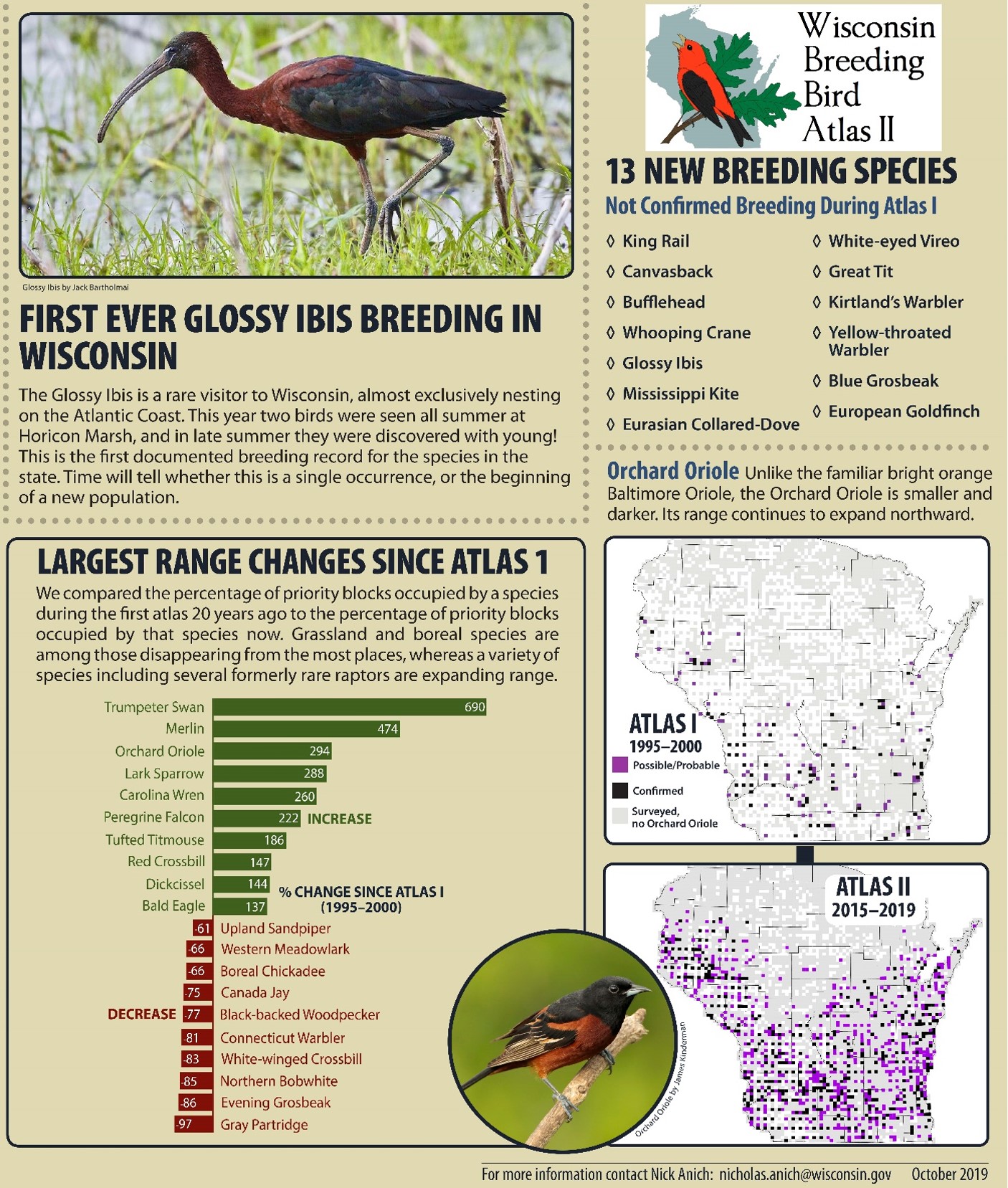 In addition to the Glossy Ibis, the 12 other new species breeding in Wisconsin since the last Atlas survey represent bird populations expanding their range, like the Mississippi Kite; non-native species that have escaped captivity, like the European Goldfinch; or birds that are the focus of species recovery campaigns, like the Whooping Crane.

Other preliminary survey results show grassland species like Western Meadowlark and Upland Sandpiper experiencing some of the biggest range contractions, mostly due to loss of habitat, Anich said.

“Some boreal forest species, such as Canada Jay, Boreal Chickadee, and Black-backed Woodpecker, also showed dramatic decreases in distribution as they appear to be receding northward, likely in response to a changing climate.”

Other species have expanded their range, including raptors like Bald Eagle, Osprey, Merlin, Cooper’s Hawk and Peregrine Falcon, Anich said. “We’re also seeing a handful of southern species, like Orchard Oriole and Tufted Titmouse, pushing farther north into the state,” he added.

Project data will be used to inform Wisconsin conservation efforts in years to come, as well as provide vital data to national and global ornithological studies, Brady said. A recent study published in the journal Science determined that the number of birds in the United States and Canada has fallen by nearly 3 billion, or 29%, since 1970. Such alarming news highlights the importance of large-scale projects like the atlas, which will help us understand bird populations in Wisconsin and how best to manage them, he said.

While survey coordinators still welcome observations of young birds through the end of this year or any sightings with breeding activity since the project began in 2015, they’re now focusing on reviewing the data already collected.

After 2020, the results will be prepared and formatted for release in a book, said the Wisconsin Society for Ornithology’s Carl Schwartz, a lead member of the WBBA II steering committee.

“Though publication is still several years out, we’re already turning our attention to production of the print Atlas. As a follow-up to the first atlas produced 20 years ago, this book will give us extraordinary insight into the changes occurring to Wisconsin’s birdlife.”

Atlas results data also will be published online in a user-friendly, quick reference format that will complement the book, Schwartz said.