Birders began arriving well before our 8:00 AM start time, under sunny skies and with the temperature around 50 degrees. We gathered on a grassy area near the lower parking lot at Harrington Beach State Park and started watching the bird activity in the nearby trees and bushes. It turned out that we had a fantastic attendance of birders, with about 45 showing up. 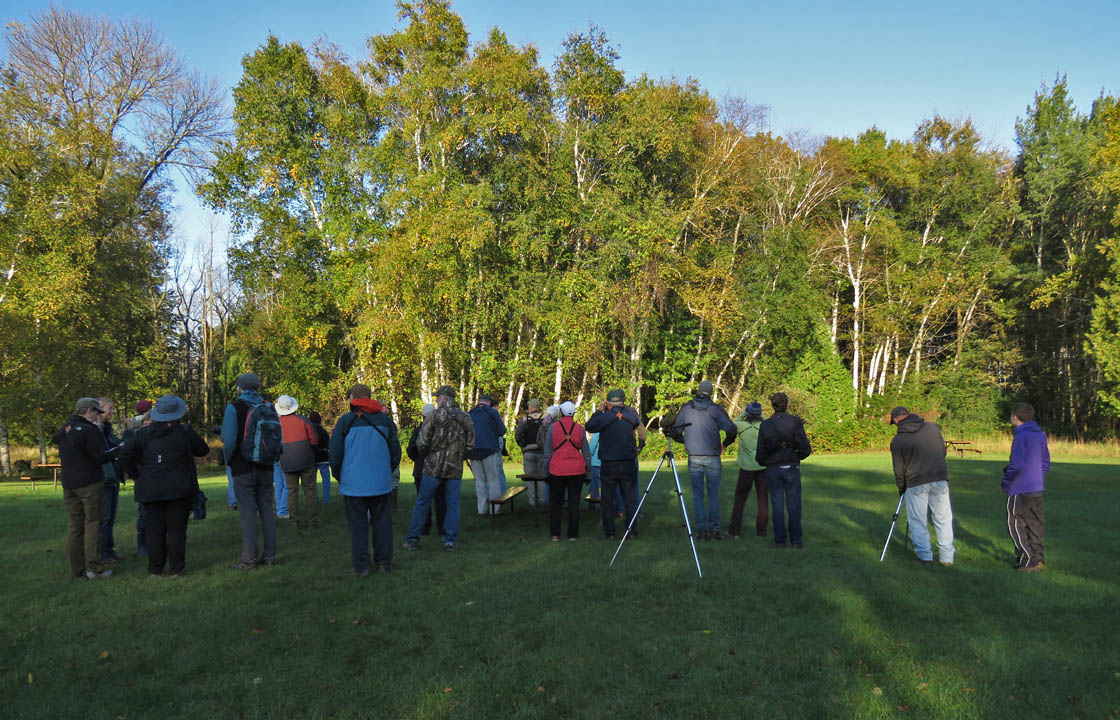 A nice variety of birds was observed there, including a mixture of resident woodland birds like RED-BELLIED WOODPECKER, BLUE JAY, NORTHERN CARDINAL, WHITE-BREASTED NUTHATCH, and BLACK-CAPPED CHICKADEE. A nice number of migrants were also present, including YELLOW-BELLIED SAPSUCKER, SWAINSON’S THRUSH, as well as RED-EYED and BLUE-HEADED VIREOS. Warblers included BLACK-THROATED GREEN, NASHVILLE, and YELLOW-RUMPED. Other birds present were GRAY CATBIRD, AMERICAN ROBIN, and EUROPEAN STARLING, and an EASTERN TOWHEE that was heard calling, then later showed itself.

Early on, one of the attendees mentioned that he had seen a BARRED OWL just a short distance away, so he took a portion of the group with him for a short time to see if they could spot the owl again. They found the bird, perched higher – about where it had been – and they were able to get good looks. 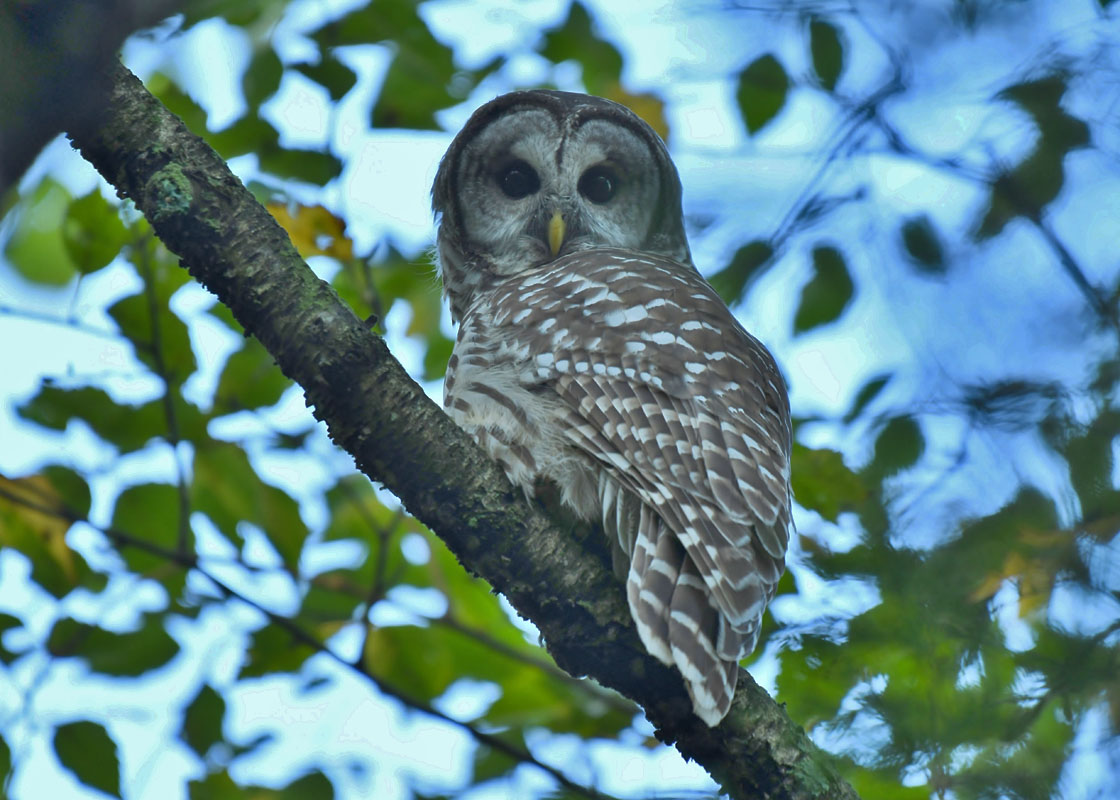 Around 8:45 we took a hike to the south along the park’s access road and trails. Several RUBY-CROWNED and GOLDEN-CROWNED KINGLETS spotted along the way, as well as a BROWN CREEPER and a few YELLOW-RUMPED WARBLERS.

We moved down toward the Lake Michigan shore and were surprised to see that the edge of the park had eroded away, due to high waters and crashing storm waves. The bird observation station had been moved, due to the erosion, and was now located along the shore a little further south. We stopped there to scan the waters, although there weren’t many birds evident. We managed to spot a few migrating ducks, including MALLARD and AMERICAN WIGEON, and a few RED-BREASTED MERGANSERS. Both RING-BILLED and HERRING GULLS were also present. 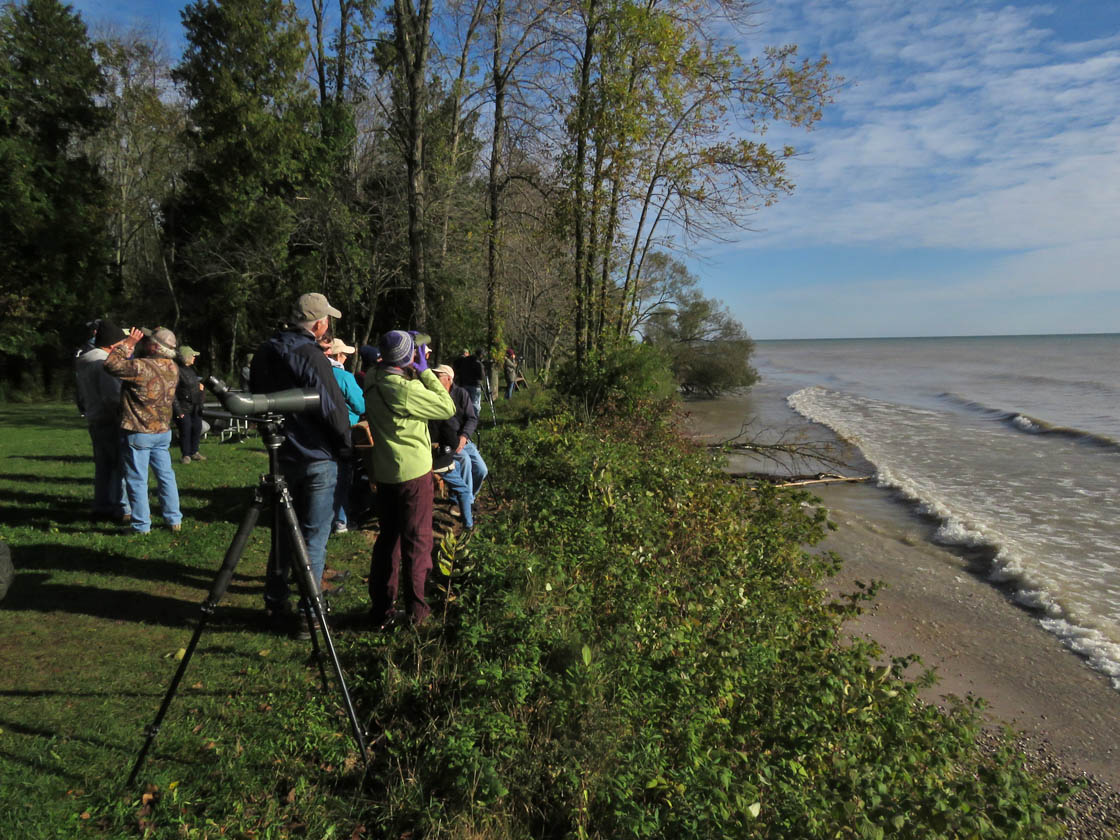 A reasonably large bird was spotted flying just above the water, and then it finally landed. It turned out to be a RED-THROATED LOON – identified by the uptilted dagger-like bill. Unfortunately, it was pretty far away, and diving for long periods, so most of the group wasn’t able to observe it.

At about 10 AM the group returned to their cars and drove to the upper portion of the park, near Puckett’s Pond. We walked down to the water and then checked the shrubs and trees nearby, finding YELLOW-BELLIED SAPSUCKER, CHIPPING AND WHITE-CROWNED SPARROWS, both KINGLETS, and YELLOW-RUMPED and BLACK-THROATED GREEN WARBLER. 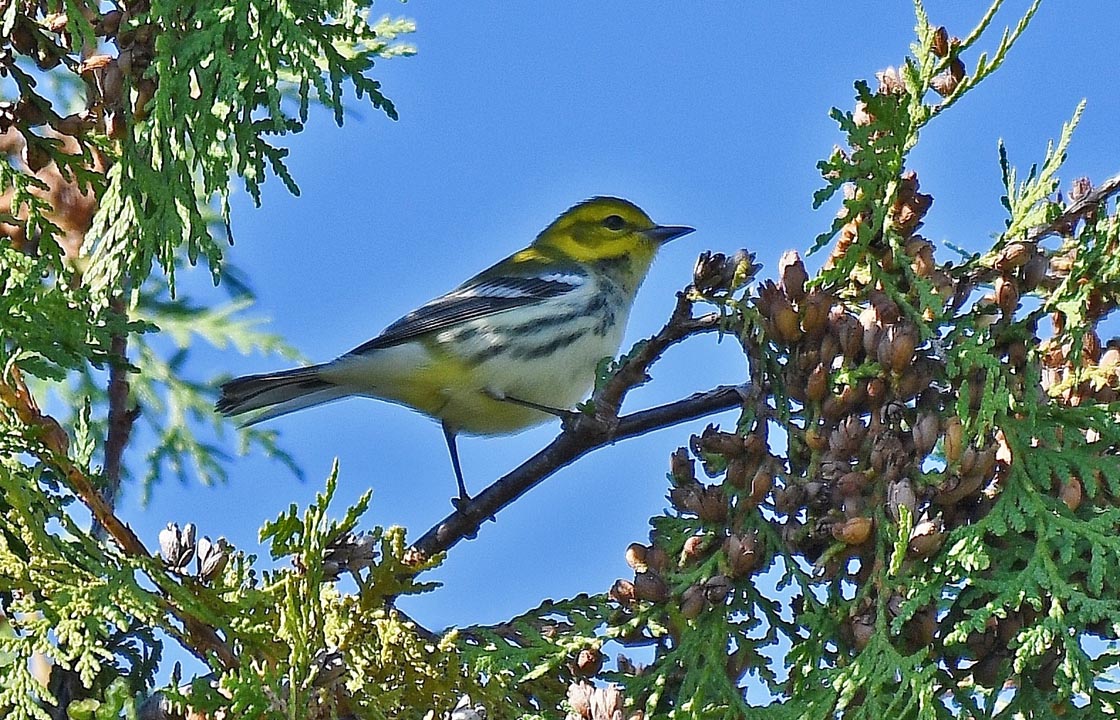 With fairly strong winds from the west and WSW, we were hoping for a decent raptor flight, but unfortunately, it wasn’t to be – our hawk list for the morning was pretty sparse. We spotted a couple of RED-TAILED HAWKS, an OSPREY, and a couple of TURKEY VULTURES, but that was about it for raptors. AMERICAN ROBIN, CEDAR WAXWING, HOUSE FINCH and PINE SISKIN were observed as we scanned the skies, but the general lack of hawks left us disappointed. 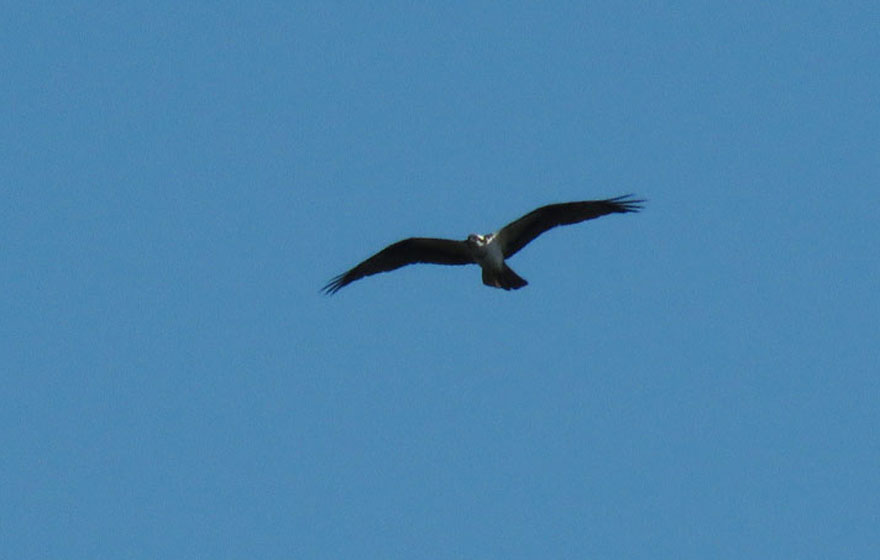 Around 11:20 AM Jeff Baughman happened to check his phone and saw that a VARIED THRUSH had been observed at Indian Mound Park, on the south side of Sheboygan. That location wasn’t really that far away, so we quickly got in our cars and headed north.

We arrived at Indian Mound Park at about 11:52 and started looking for the reported thrush. We hiked a couple of the trails, finding a variety of birds including GOLDEN-CROWNED and RUBY-CROWNED KINGLET, WHITE-CROWNED and WHITE-THROATED SPARROWS, and also BLACK-CAPPED CHICKADEE and a GREAT TIT – a bird that would otherwise have gotten us very excited, but on this day we were still hoping to find that rare thrush that had been reported.

A few other birders who were not far away from us suddenly started acting very excited, so we quickly walked in their direction. It turned out that they had indeed spotted the VARIED THRUSH! It was feeding and hopping around on the ground with several AMERICAN ROBINS, and we slowly moved closer and were able to get good looks and photos of this rare western visitor. Everyone high-fived at our good fortune – knowing that this was the perfect way to end not only the day’s field trip but also the last field trip of 2019! 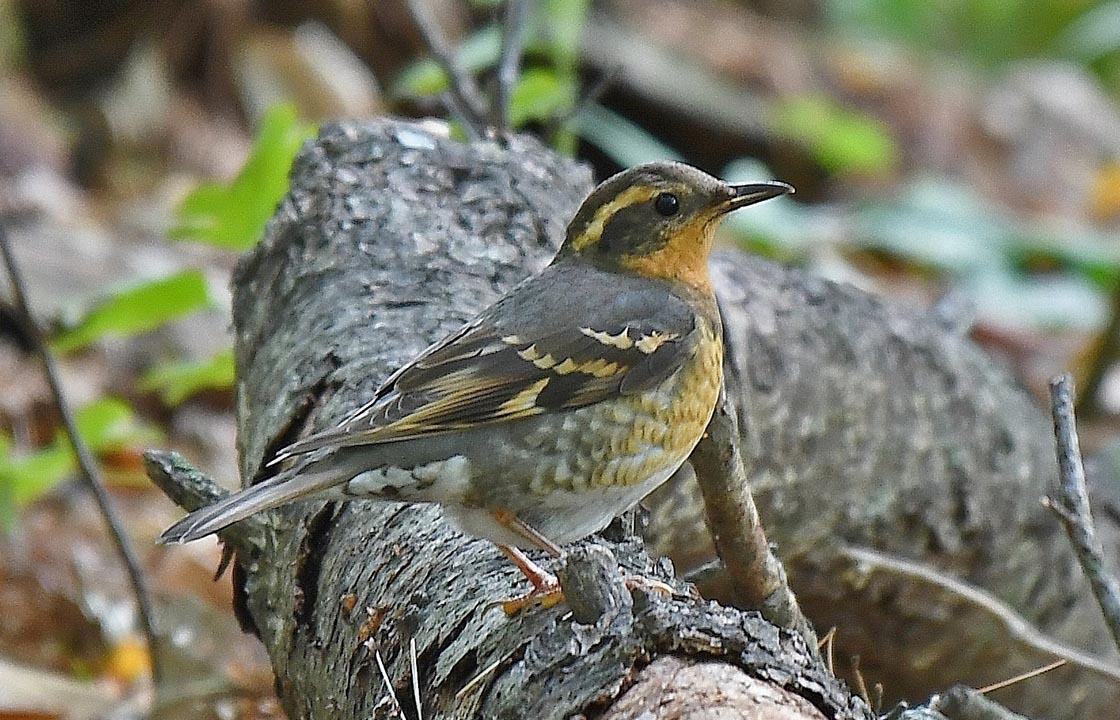