In the early afternoon of Sept. 1, 1914, Martha the Passenger Pigeon, the last of her kind in the world, passed away, and her entire species disappeared with her. But before that instant of extinction, there had been decades of decline, as hunters killed what was once the most common bird in the world. Billions of Passenger Pigeons became millions, thousands, and then hundreds, until eventually one became none. Few people took note of this decline as it happened: There still seemed to be a lot of pigeons, and their abundance obscured their downfall.

History now appears to be repeating itself — across the entire avian world.

A new study, analyzing decades of data on North American birds, estimates that the continent’s bird populations have fallen 29% since 1970. That’s almost 3 billion fewer individuals than there used to be, five decades ago. 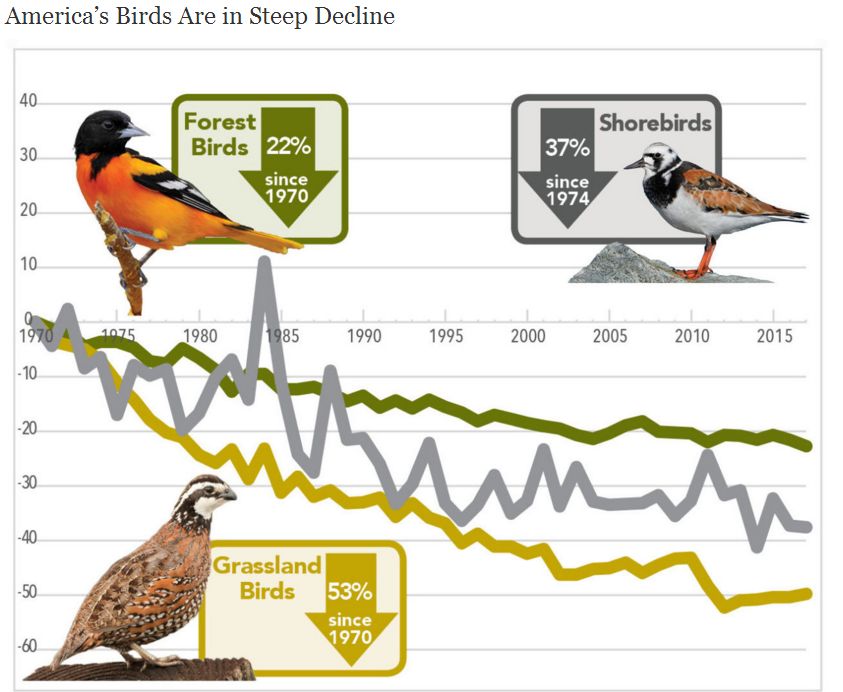 With this great emptying of the skies, there are now 3 billion fewer beaks to snap up insects and 3 billion fewer pairs of wings for moving nutrients, pollen, and seeds through the world. We haven’t just lost birds, but all the things that birds do, “as well as our connection to what is arguably one of the most widely cherished forms of wildlife on the planet,” says Kristen Ruegg from Colorado State University. “Our forests and backyards will continue to grow quieter with every passing year, and within that leftover space there is an opportunity for complacency about the natural world to grow.”

“It’s a staggering result,” says Kenneth Rosenberg from Cornell University and the American Bird Conservancy, who led the analysis, which included data from the North American Breeding Bird Survey coordinated by the USGS and the Canadian Wildlife Service — the main sources of long-term, large-scale population data for North American birds — the Audubon Christmas Bird Count and Manomet’s International Shorebird Survey.

“This is a critically important study,” says Nicole Michel, an ecologist at the National Audubon Society. Past work has shown that specific groups of birds are declining, but this is the first study to rigorously put a number on the full extent of these losses. And surprisingly, it shows that the most ubiquitous birds have been the hardest hit.

“The common wisdom was that we’d see the rare and threatened species disappearing and the common, human-adapted ones taking over,” Rosenberg says. Instead, his team found that 90% of the missing birds came from just 12 families, and that they were all familiar groups such as sparrows, warblers, blackbirds, finches, larks, starlings and swallows.

About 19 species have each lost more than 50 million individuals. Seemingly ubiquitous species such as the Red-winged Blackbird are at risk. The Dark-eyed Junco, a type of sparrow and one of the most common sights along Wisconsin roadsides and at bird feeders during the winter, is in trouble.

Even birds that humans successfully introduced to this continent — such as the House Sparrow and European Starling, famed for their adaptability — are in trouble. “If we can’t even keep introduced species in healthy populations, that could be a stronger indicator that the environment is unhealthy,” Rosenberg says. It’s as if all birds are canaries, and the entire world their coal mine.

As with the Passenger Pigeon, abundance obscures decline. The fact that 24 million Eastern Meadowlarks still survive hides the fact that 74 million have gone. “There are still a lot of birds out there,” Rosenberg says. “If you have a lot of birds coming to your feeder and they’re reduced by 30%, you might not see that. This loss of abundance can be happening right under our noses.”

Rosenberg’s team also used data from a weather-radar network to show that the number of birds migrating through America’s nighttime skies has fallen 14% since 2007. The radar not only provides another line of evidence, but picks up species that more traditional surveys miss, such as Arctic-breeding shorebirds. It “increases our confidence that these declines are really happening,” Michel says.

The new study is silent on the causes of these declines—that’s what Rosenberg’s team will look at next. But it’s widely accepted that “habitat loss and degradation are the largest forces behind the decline of birds,” Rosenberg says. The fact that grassland birds have suffered more than those in other habitats attests to this problem. As wild prairie has been converted into agricultural land, invaded by non-native plants, and flooded with harmful pesticides, 700 million local birds have disappeared, and three-quarters of bird species are going downhill.

It’s hard to estimate exactly how many birds are dying due to habitat loss, or from other potential dangers such as pesticide use, the disappearance of insect prey, or climate change. Other threats are easier to quantify, and the biggest of these, by some margin, is domestic cats, which kill an estimated 2.4 billion birds every year. Window collisions claim 600 million bird lives a year, vehicles take out 214 million, power lines are responsible for killing 32 million, and the lights of industrial towers fatally distract about 6 million.

Wind turbines are often cited as a problem for birds, and while they should be placed carefully to protect migratory species, their effect is comparatively small; for every bird killed by a wind turbine, thousands are killed by a cat.

The organizations behind the new study have compiled a list of seven personal actions that people can take to protect North America’s remaining birds:
1) Make windows safer with products that prevent collisions.
2) Keep cats indoors (or walk them on a leash).
3) Choose native plants instead of lawns, to offer food and resting places for migrants.
4) Avoid pesticides.
5) Choose bird-friendly, shade-grown coffee.
6) Reduce the use of plastics, especially single-use plastics.
7) Watch birds and report what you see to help scientists track surviving populations. 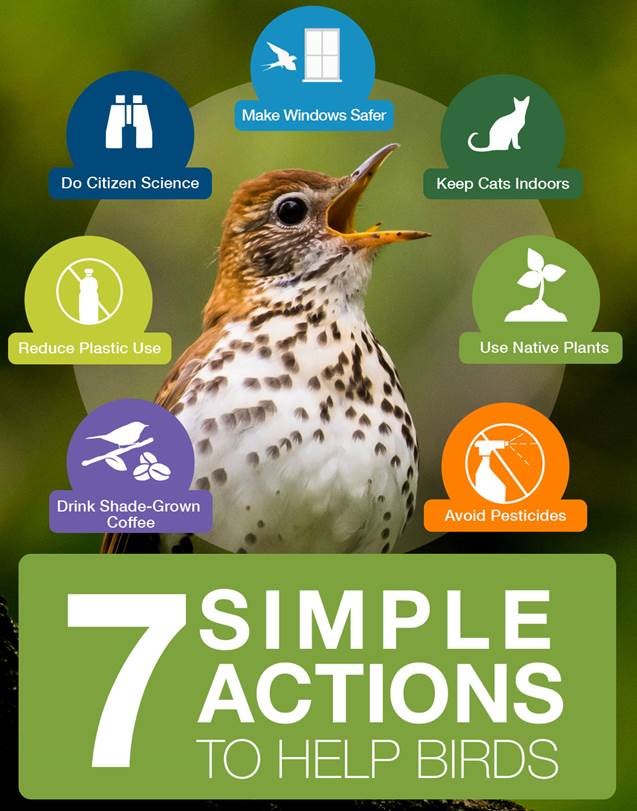 Ultimately, it will take political will and action to refill the emptied skies—and there’s precedent for such reversals. The number of raptors (hawks, eagles, and their kin) has doubled since the 1970s, thanks to a ban on DDT and hunting restrictions imposed by the Endangered Species Act.

At the same time, waterfowl such as ducks and geese have increased in number by 56% after hunters lobbied for legislation to protect wetland areas. These success stories show that “when people band together and take action, it is possible to reverse population declines and bring species back from the brink,” Michel says.

“Birds are down, but they’re not out. When you give them half a chance, they can recover.”