It would have been big news simply to be able to announce that all 1,283 priority and specialty blocks for the 2nd Wisconsin Breeding Bird Atlas had been marked complete. After all, there were nearly 500 blocks left to finish at the start of the fifth season, but with a phenomenal effort involving more than 2,000 people it got done. 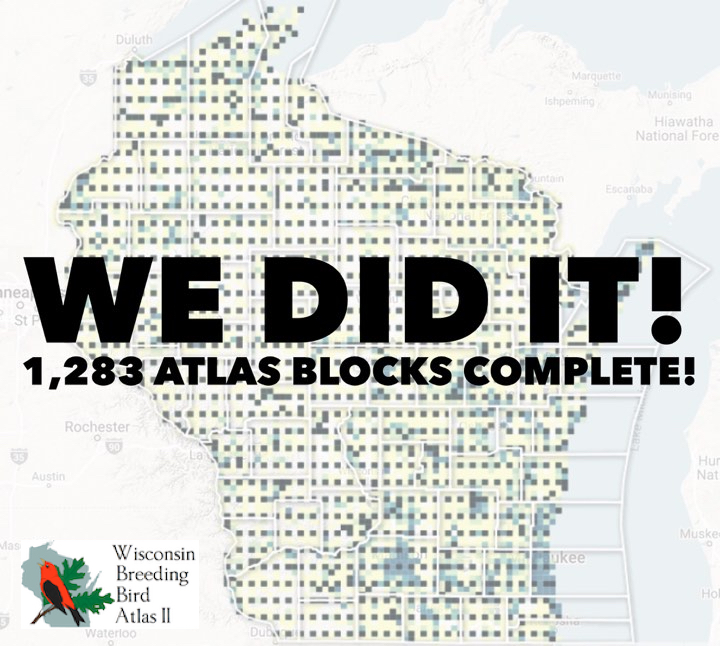 But the fifth season concluded with a real bang!

The Glossy Ibis (Plegadis falcinellus) typically occurs in marshes bordering the Atlantic and eastern Gulf coasts. Glossy Ibises are not found in Wisconsin every year, but in recent years it is not unheard of to have one or more wanderers show up at Horicon Marsh, often in the company of western White-faced Ibis (Plegadis chihi).

And so when 2 Glossy Ibis showed up in late May of 2019, we were not overly suspicious that they were nesting. Recent atlases for surrounding states and provinces -- including Michigan, Minnesota, Illinois, Iowa and Ontario -- contained no breeding records for Glossy Ibis, although one summering bird in Iowa was coded as Possible.

Review of this summer’s records show consistent observations of one or twoGlossy Ibis at Horicon (and occasionally a single White-faced.) So imagine our surprise when atlaser Aaron Haycraft turned up a family group in the Old Marsh Road area of Horicon Marsh! The juveniles can be identified by their lack of chestnut in the plumage, and also show white patches on the throat.

It was the 227th species confirmed for the 2nd Atlas. 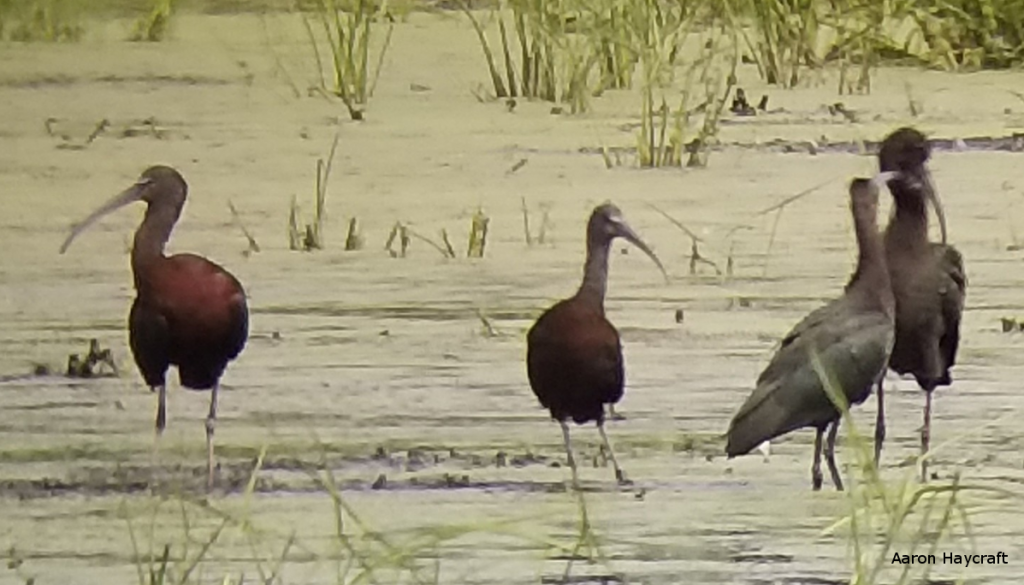 The two juvenile Glossy Ibis (right) lack the chestnut tones that can be seen on the bodies of the two adults (left). Photo by Aaron Haycraft.

Since Aaron’s observation, we’ve had additional checklists with photos showing the family group and also discovered an earlier checklist showing a juvenile that we didn’t know about until Aaron’s report. If you’ve got some ibis photos from Horicon this summer check to see if you captured photos of the family group (the easiest field mark may be the color of the neck/breast/upper-back in good light: chestnut in adults but gray-green in juveniles) and upload them to the Atlas eBird portal!

Ibis are known for post-breeding dispersal, which causes us to be cautious with a record like this. However, the history of the pair at this site all summer, the distance from other known Glossy Ibis populations, and the fact this continues to be the only pair of ibis seen at the marsh seems to make it unlikely these are birds that just showed up from somewhere else. To our knowledge the closest confirmed nesting for this species is on the Atlantic coast, over 700 miles from Horicon Marsh! (Email us at atlas@wsobirds.org if you know of any closer record.)

Despite the heavy birder coverage at Horicon, the nest presumably escaped detection earlier in the summer because there is a large area of inaccessible marsh. Ibis tend to nest in low shrubs or rushes, often in colonies with other species like night-herons or gulls. Atlasers Daryl Christensen and Sumner Matteson reported seeing the ibis pair heading over into the area of a night-heron colony at dusk, earlier in the summer, a possible nest site for them. After hatching, the juveniles spend their first weeks fairly close to the nest site before venturing farther to forage with their parents.

Historically in the U.S., Glossy Ibis were primarily in Florida, but a rapid range expansion occurred through the 1970s, and they now breed as far north as Maine. However, since the 1970s, population trends are less clear, with some populations in the northeast declining. Habitat quality may be an important factor —Horicon Marsh features exceptional habitat for marsh birds — and it will be interesting to see if this is a one-off or the beginning of a nesting population of Glossy Ibis in Wisconsin, as turned out with Black-necked Stilt, which first turned up as the first Atlas was winding up.

As for completing all 1,283 priority and specialty blocks, we really can’t say enough about all the energy and dedication and grit on display. From the Apostle Islands of Lake Superior to the bluffs and backwaters along the Mississippi to agricultural fields of southern Wisconsin, everybody came together to complete the project.

Late season blitz events organized by Tom Prestby proved pivotal. Two Door County events attracted 6-8 atlassers and turned the tide from central and northern Door County being basically a disaster at the start of the season to being set up very well once July rolled around. The Sandhill Wildlife Area event had about 10 participants and in two days closed nine blocks in Juneau, Wood, Jackson and Monroe Counties. The Kemp Natural Resources Station blitz, with 20 participants, closed 16 blocks (twice the goal!) in Oneida, Vilas, Lincoln, Taylor and Forest Counties.

The blitzes also set up several more blocks to be closed later.

The resulting dataset will be analyzed for years to come and will reveal so much information critical to conserving Wisconsin’s birds.

Amidst all the bad news in the world, I'm encouraged that we found over 2,000 people that care about birds and wildlife and who wanted to join us on this project. The dedication shown by everybody in the past year has been amazing. We didn't let on that we were worried about leaking into a mop-up year six, but I sure was, but birders statewide rose to the occasion and kicked butt in the final months! We could not have done it without you.

It will be several years before we have all the observations vetted, analyses run, and final maps made, but I'm really excited to watch all these data turn into a book. To everybody that has helped so far, THANK YOU!

For the remainder of the 2019 season you can continue to submit relevant sightings as you come across them, although we expect active atlasing to be tapering off very soon. We have now reached the time of year where migrants are arriving and even your local birds are moving around quite a bit, so caution is warranted! Adults feeding young are fair game, but from this point forward, use of lower codes is discouraged. Refer to the Breeding Guideline Bar Chart as needed.