August 23-25. We couldn’t have asked for better weather for this event! It was sunny or partly cloudy for most of the weekend, with mild daytime temperatures in the mid-70s, and comfortable nights in the 50s. On top of all that, there was little or no wind for most of the time. Jeff Baughman, Wendy and I showed up at Cox Nature Center at Honey Creek right around 5:30 PM and Levi Wood was already there. We started setting up camp and soon started preparing dinner. Around this time, another couple showed up with their camper and joined us. 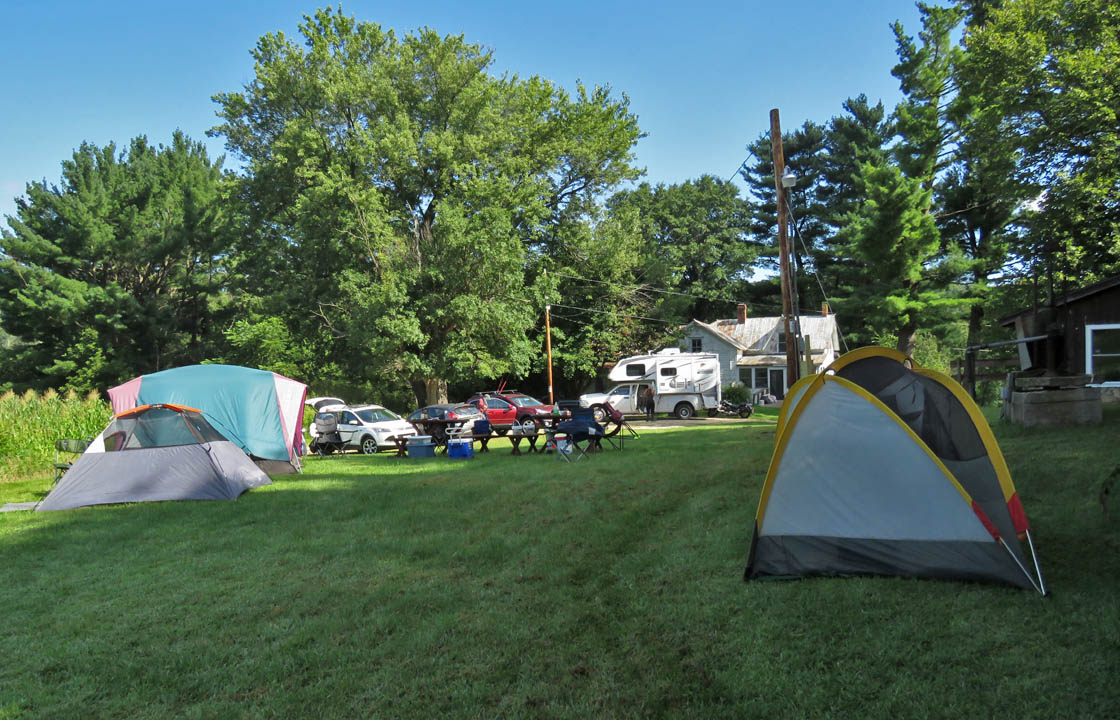 After dinner, we decided to take an evening hike, and we walked out Alder Lane and down the road. A Barred Owl was calling not far away, and we were able to spot a few other birds, with a couple of sparrows giving snippets of a late-summer song. As we walked along Skyview Road, we saw a couple of Common Nighthawks cruising overhead. During the walk back to camp, as it was getting darker, we played a Barred Owl recording and one individual flew right in and started calling. Its mate soon started hooting also, not far away. We could see the first owl by flashlight, as it sat up in a nearby tree.

The next morning everyone was up early to eat breakfast and get ready for a morning hike around the WSO’s Honey Creek property. A little before 7 AM we headed up the lane and east on Skyview Road – working our way toward the recently-acquired Dischler Tract. Several Sedge Wrens were heard chattering in a wet meadow along the road, and Sandhill Cranes sounded off in the distance. The early morning sun was starting to warm up the trees along the first ridge. An Eastern Wood-Pewee perched up in a dead tree, giving us good looks, as well as a young Yellow-bellied Sapsucker. Several Cedar Waxwings were also spotted, along with a Rose-breasted Grosbeak, and a Tennessee Warbler – and a Pileated Woodpecker called in the distance. 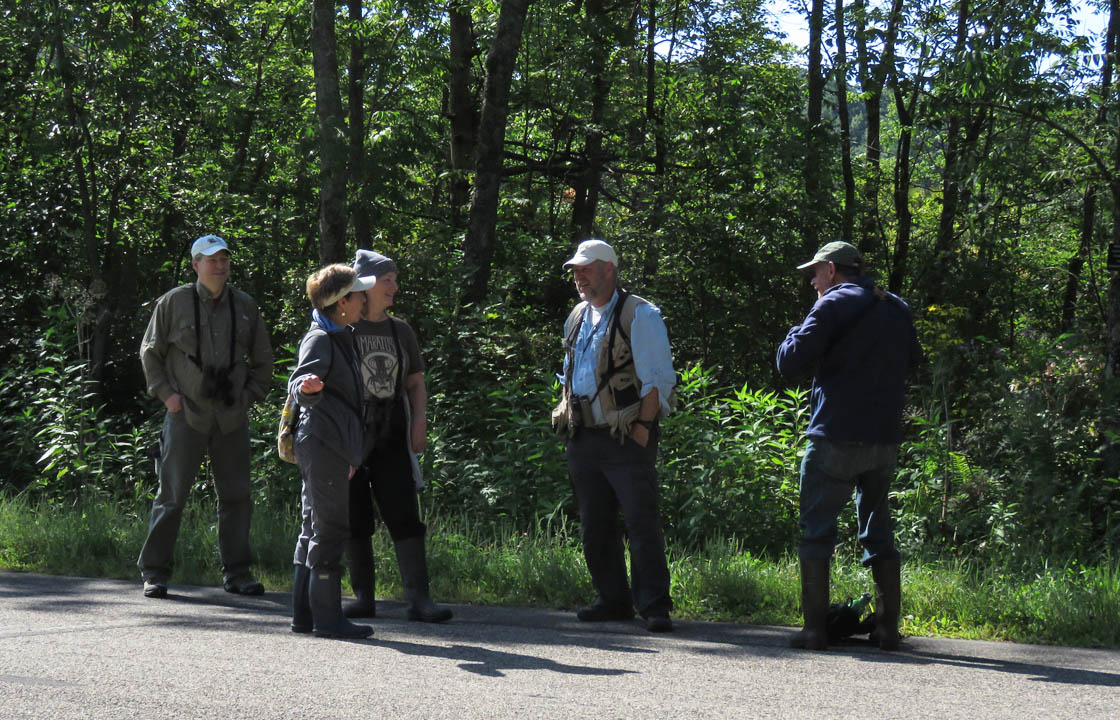 We continued up through a group of tall pines and reached a narrow hayfield. In the adjacent oaks, we spotted a female Scarlet Tanager, followed by a young Brown-headed Cowbird a short distance away. We wondered who its foster parent might be, and then as though on cue the tanager flew in and fed the cowbird! 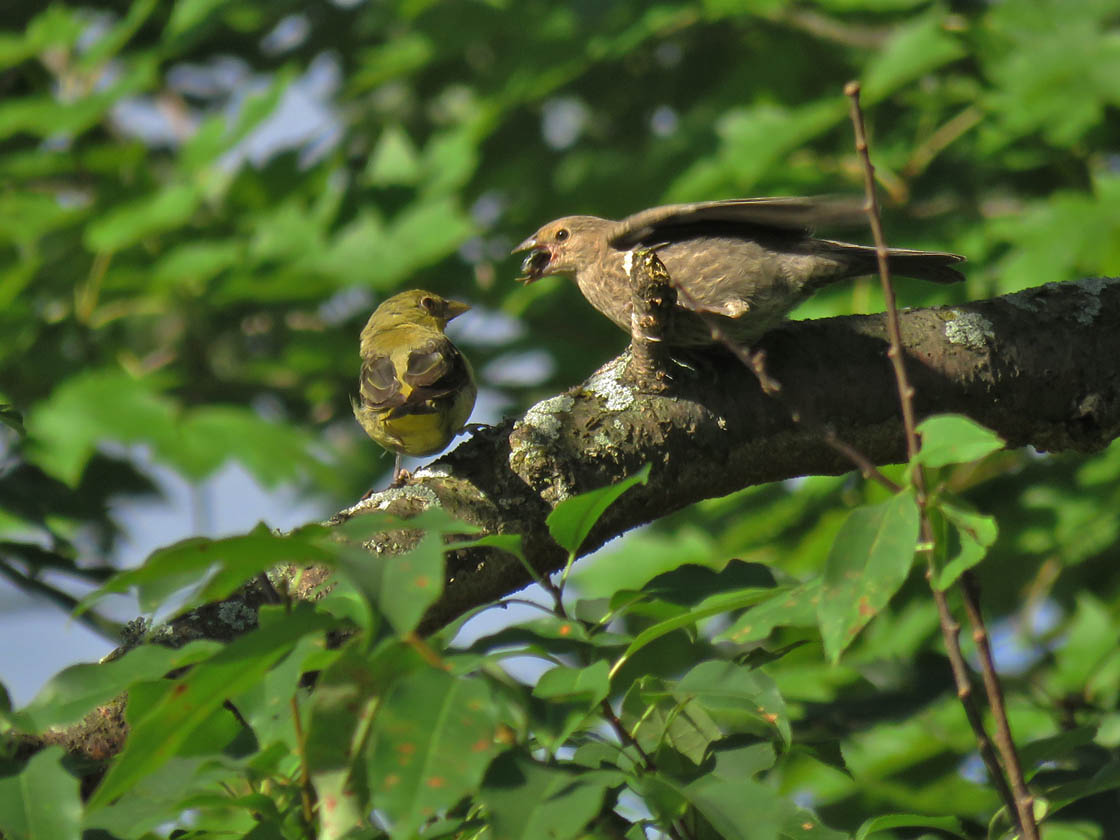 Continuing up the trail we soon entered the extensive oak forest, which is one of the features that make this property truly special – along with the scenic sandstone bluffs. The big trees were fairly quiet during this late summer season, especially compared to our hike here this past May when there were Ovenbirds and Wood Thrushes singing in all directions. Several woodpeckers were present, however, as well as more pewees. The trail briefly entered a hemlock grove atop a sandstone bluff, with a view of the waters of Honey Creek down below – where saw a Great Blue Heron standing patiently. 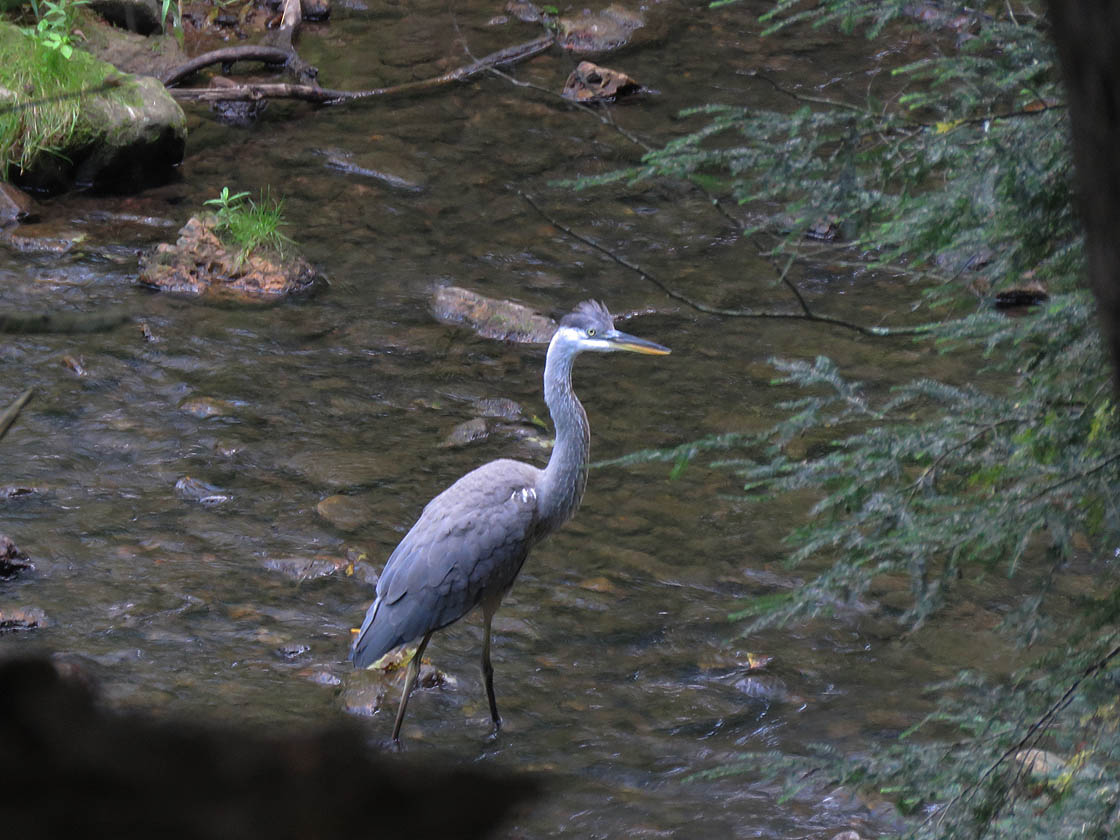 From there we descended the slope where we connected with the original trail, which parallels the meandering creek, and we followed it south. We added a few more birds along the way back to the nature center, and had great views of a Giant Swallowtail! After lunch, we were joined for a time by Dan Pickarts and his son. Dan is slated to be the new Honey Creek Committee Chair, who we expect will soon be taking over from longtime chair, Levi Wood. He has been doing a tremendous job for WSO – especially in the past week when he worked hard to replace the old power pole at the Cox Nature Center (which had recently blown down in a storm) and restore the electrical service there. He and a dedicated work crew also cleared Wood Nettles from a section of new trail, which allowed us to pass through there during our hike! In the afternoon we decided to drive the short distance to Natural Bridge State Park to hike the trails there. The birds were fairly quiet (although we did find seven species), but we enjoyed viewing the majestic sandstone bridge there during our nearly hour-long trek. 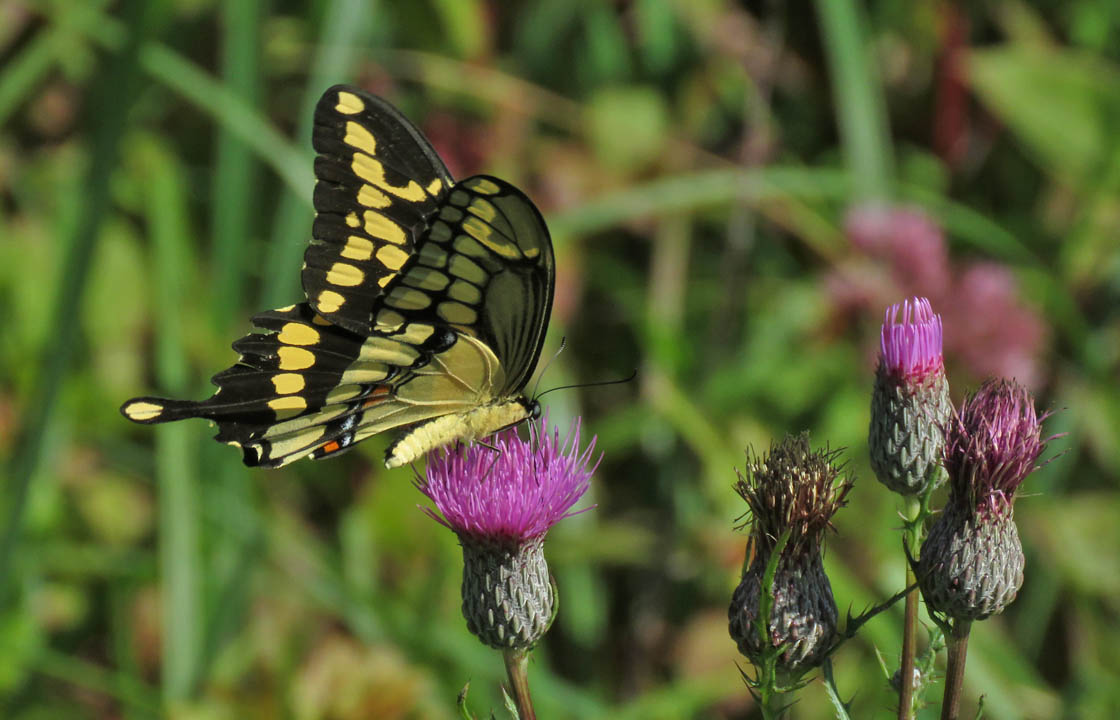 A beautiful Giant Swallowtail found along the hike. Photo taken by Tom Schultz.

Around 6:30 AM on Sunday we drove over to Baxter’s Hollow, to check out this scenic stream valley. We started in the lowland portion and worked our way up the valley – and it turned out to be fairly productive. The real surprise was finding a pair of Carolina Wrens, with the male often singing a very cardinal-like song! Another unexpected bird there was a Golden-crowned Kinglet. We also encountered a modest variety of warblers, including Blue-winged, Golden-winged, Tennessee, American Redstart, Black-and-white, and Canada. Several flycatchers were also present, including Eastern Wood-Pewee, Least, and a family group of Acadians! Other birds of interest included Swainson’s Thrush, Scarlet Tanager, Blue-gray Gnatcatcher, and Rose-breasted Grosbeak. Our final destination was the Sauk Prairie State Recreation Area, mainly to check it out. Some of the birds there included Clay-colored Sparrow, Nashville Warbler, Rose-breasted Grosbeak, and a couple of Willow Flycatchers. We wrapped up the field trip about 10:15 AM. 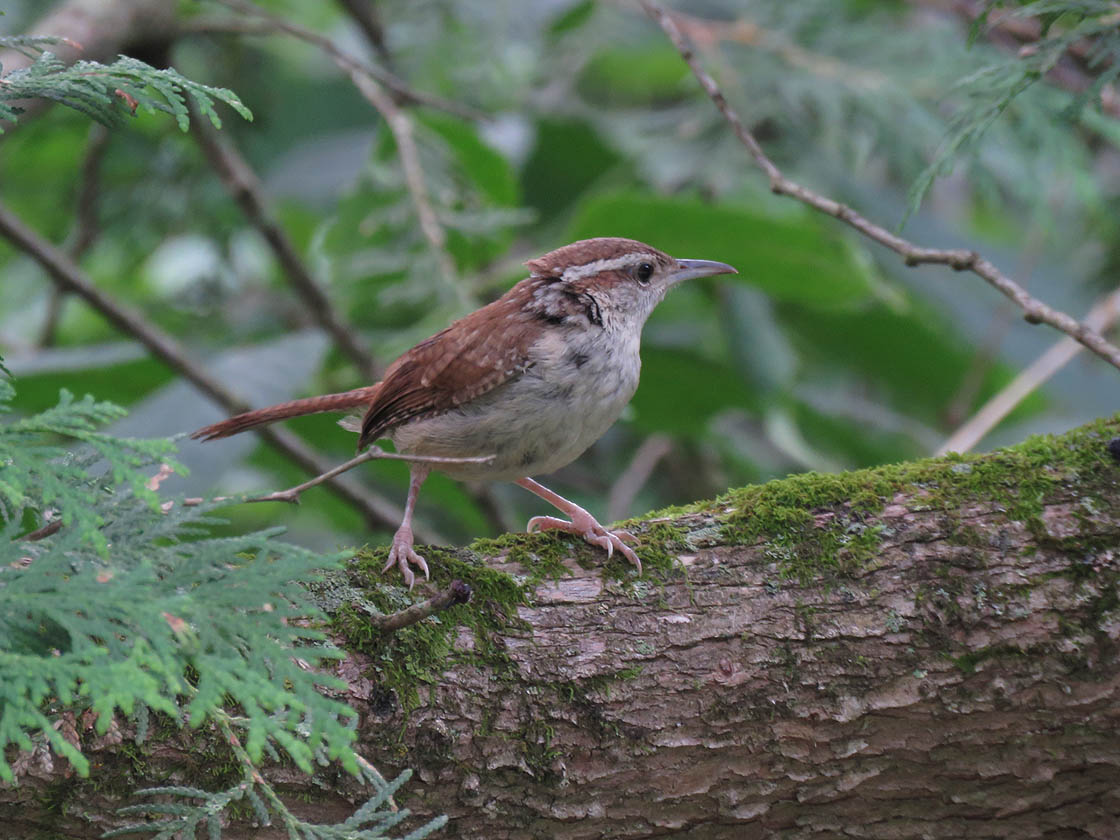 They found a pair of Carolina Wrens, an unexpected find! Photo taken by Tom Schultz.

Thanks to Jeff Baughman for co-leading this weekend field trip. We have already discussed plans for next year’s Honey Creek camp out, and have some great ideas. We expect to hold this event in June or early July when many more of the unique breeding species will be active – including Louisiana Waterthrush and Cerulean Warbler. We hope that many more of our members will join us at this fabulous property in 2020!