On Saturday, June 8, at 6:00 AM, 11 people gathered at Mauthe Lake Recreation Area for the WSO’s Kettle Moraine State Forest-Northern Unit field trip. This particular outing was a redo of the June 1 trip that got cut short because of the weather. At that trip, I told participants I would re-run this field trip the following week if anyone was interested. Several indicated that they were, so this report is for this rescheduled trip.

The day’s weather was perfect; clear sky, nominal winds and the temps in the upper 50s.

From our meeting spot at Mauthe Lake, we walked the road to the boat landing area. Along our route we saw and/or heard 5 species of woodpeckers, 6 species flycatchers (including a Willow at the boat landing), Warbling, Yellow-throated and Red-eyed Vireos, Blue-gray Gnatcatcher, several Veery, Cedar Waxwing, Swamp Sparrow, Baltimore Oriole, Northern Waterthrush, American Redstart, Common Yellowthroat, and Yellow Warbler. I was disappointed we missed the Cerulean Warblers I had the day before though. 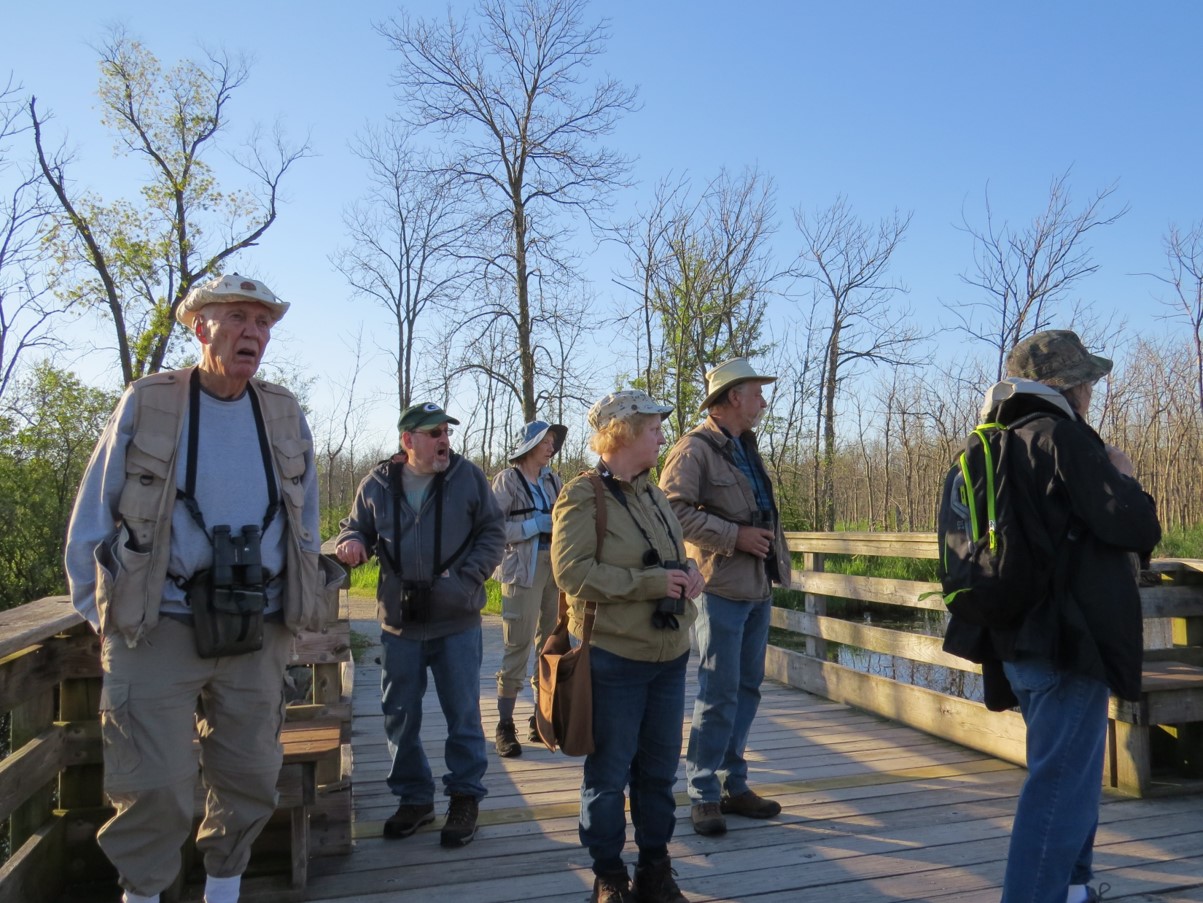 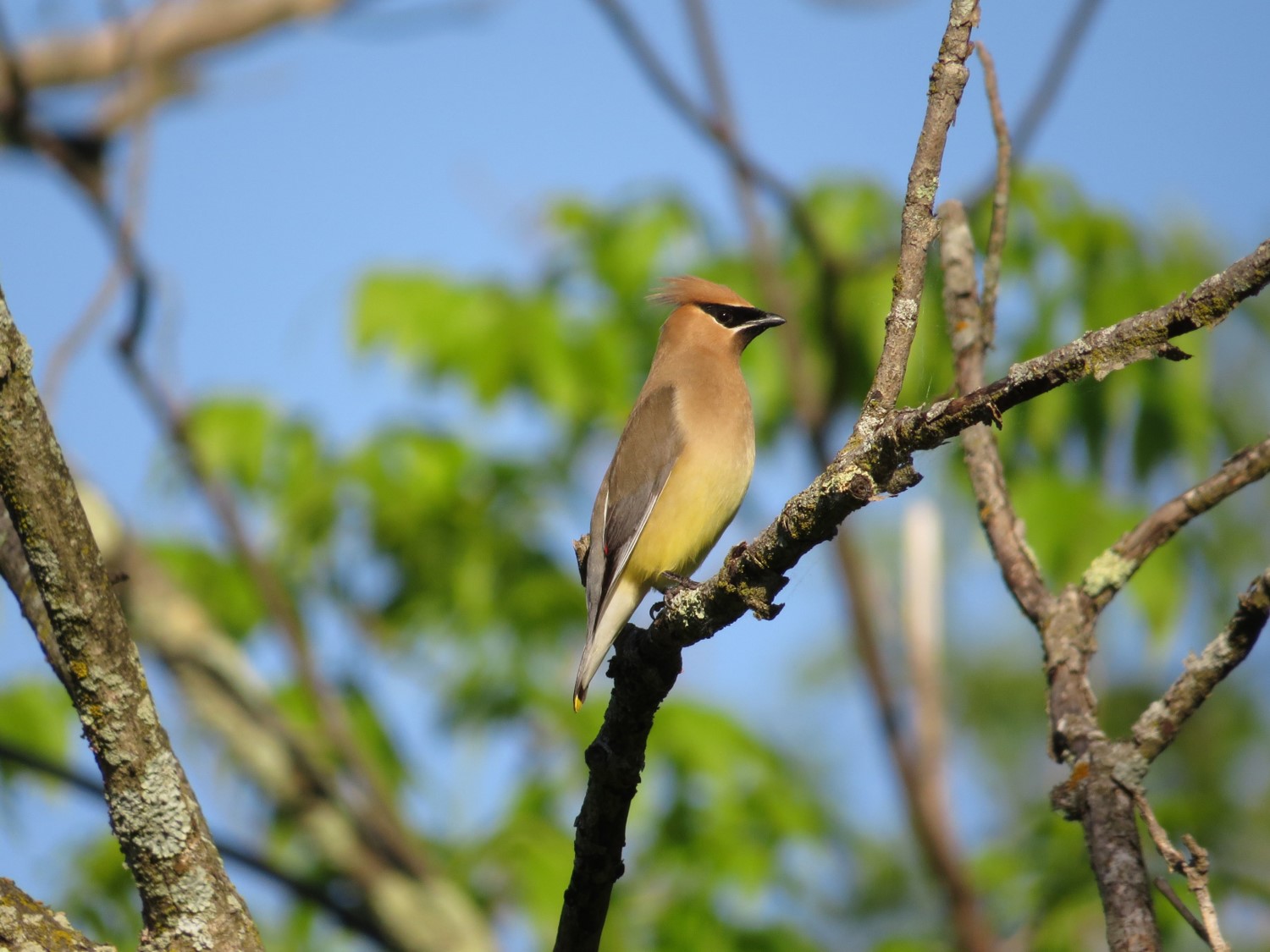 The picnic area was fairly quiet, as was the walk to the recycling area. A Hooded Warbler called a couple of times in the distance from the recycling area but it wasn’t near enough for our group to chase. We did add singing Wood Thrush here. We walked back to our cars and just south of the parking area a Pine Warbler was singing. Eventually, everyone had good looks at the bird high in the pines.

Leaving Mauthe Lake we made a quick stop at the wetlands along the entrance road for a cooperative Sedge Wren no more than 20 yards away from the cars. Mauthe Lake produced 55 species for the morning.

After Mauthe, we headed for Haushalter Lane but we first made a stop at the New Prospect Horse Riders Camp. We walked the entrance road a short distance hoping the resident Red-shouldered Hawks would make an appearance, but they did not. We did have great looks at a Blue-winged Warbler and Indigo Bunting singing up in a tree in full sunlight! A beautiful sight to see. Also heard another Northern Waterthrush, Alder Flycatcher, and added a Scarlet Tanager. 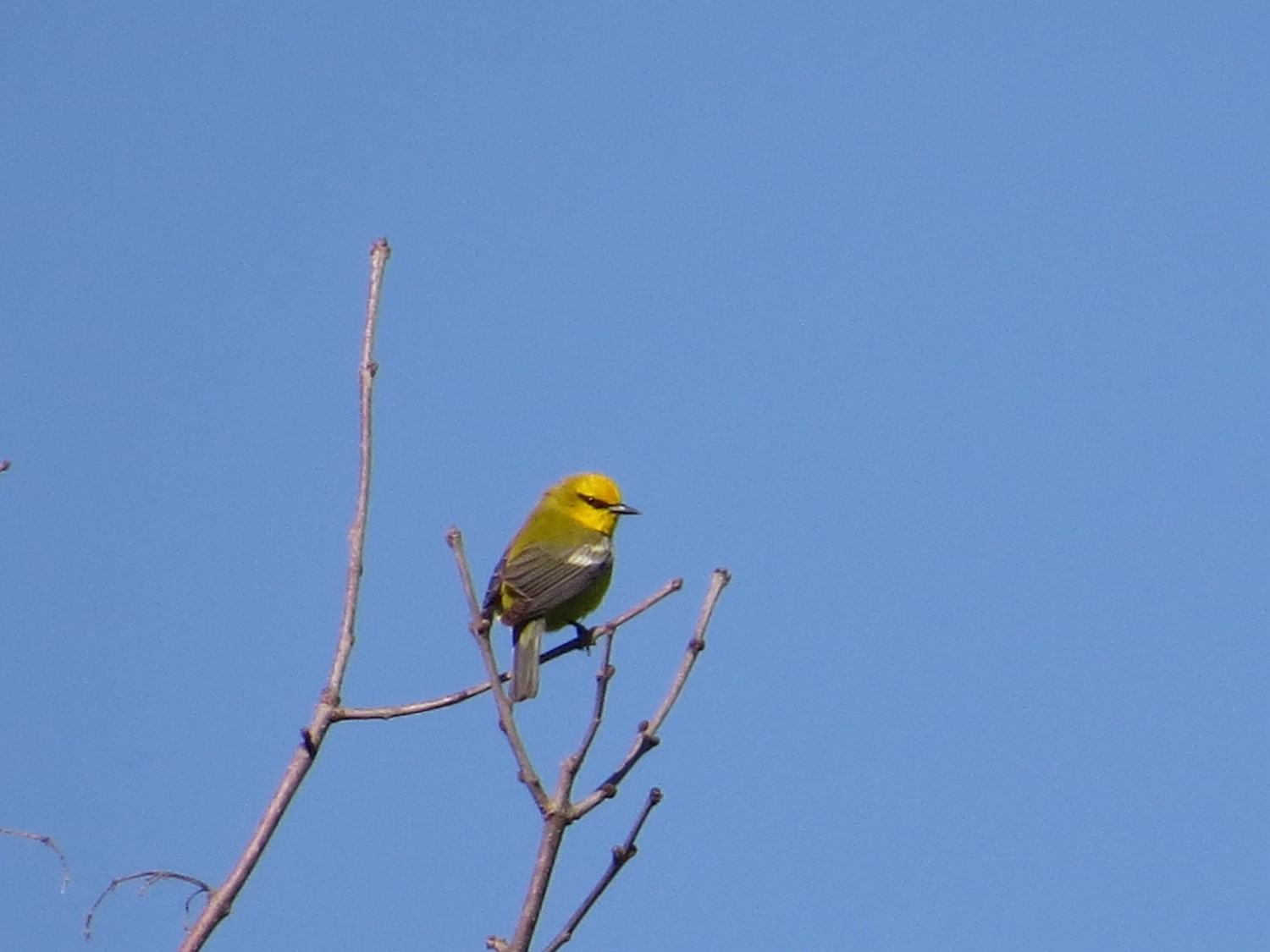 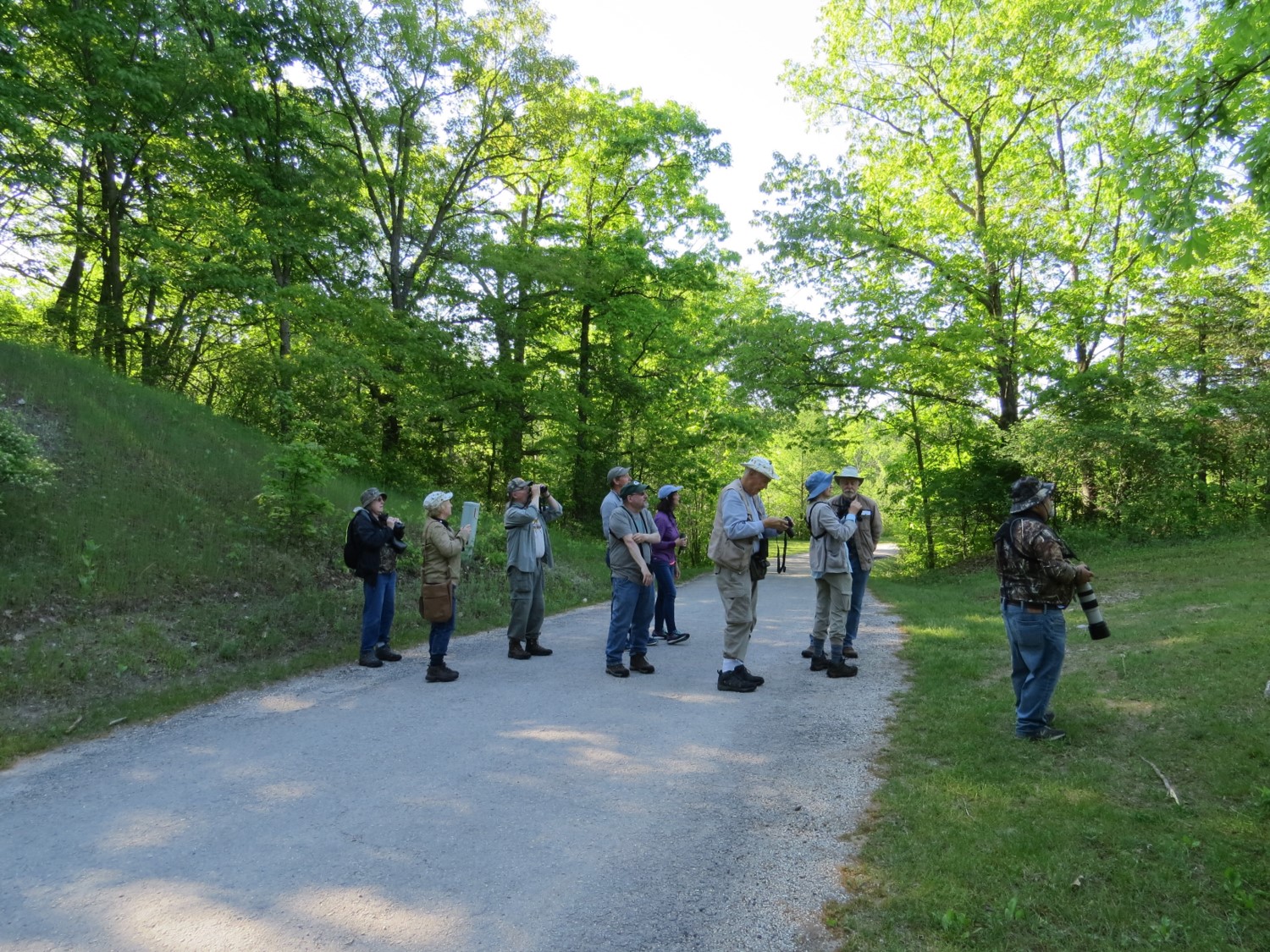 Haushalter Lane was next. At the intersection of Haushalter and CTH SS we were treated to a Mourning Warbler in full song. After a little coaxing, he made an appearance and sang for us in full sunlight 20 feet up in a tree next to our cars. Continuing along Haushalter we added Acadian Flycatcher, Red-breasted Nuthatch, Eastern Towhee, Ovenbird, and Rose-breasted Grosbeak but unfortunately no Hooded Warblers were heard or seen.

We continued to the end of Haushalter. Hiking the north trail to the bridge. We had Wood Duck, Chimney Swift, Turkey Vulture, Alder Flycatcher, Cedar Waxwing, Swamp Sparrow, plus several other common birds.

The east trail produced very little other than a Nashville Warbler, another Blue-winged Warbler, a flyby Ruby-throated Hummingbird, Field Sparrow and a calling Pileated Woodpecker. Haushalter Lane resulted in 52 species.

Our next stop Jersey Flats. Here we could hear 3-4 Henslow’s Sparrows singing but never could get a decent look, although we did have a cooperative Grasshopper Sparrow in the scope for everyone to see. While walking back to our cars I heard an interesting song. At first, I thought it was a Blue Grosbeak singing from the big oak tree at the south end of the property, but the wind made it difficult for me to be certain. We hopped into our cars and drove back to the parking area along CTH SS. Once there I knew immediately it was an Orchard Oriole. Eventually, we all had good looks at a first-year male in the oak tree. We also heard a Brown Thrasher nearby. 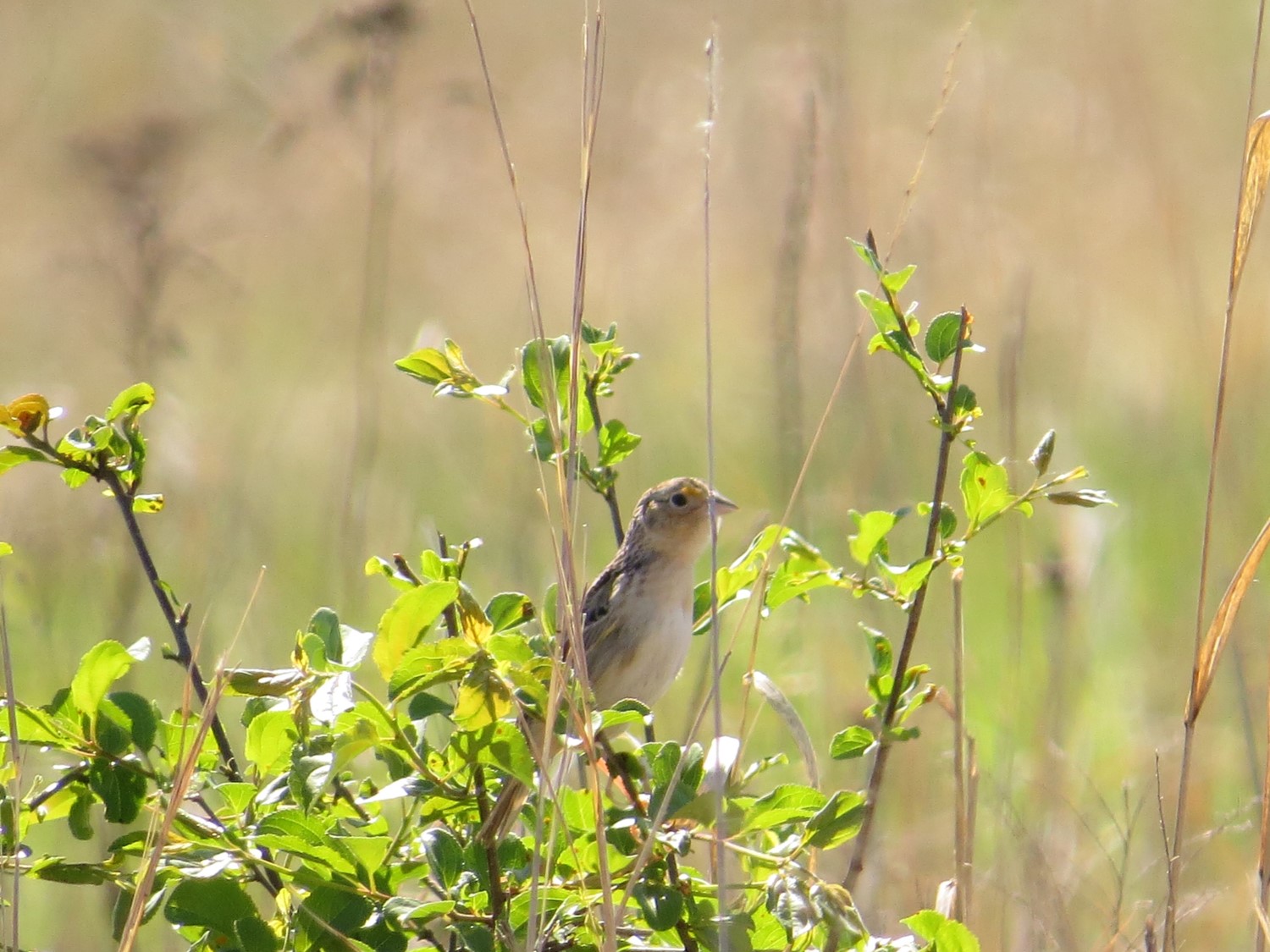 Grasshopper Sparrow out in the open at the Jersey Flats. Photograph taken by Jeff Baughman.

One of the traditions for this trip is to stop in Dundee at the ball field to view the Ospreys at their nest site. I’m fairly certain this is the 21st year a pair of Ospreys have used this area to raise their young. This year, however, they are using the south platform instead of the one closest to the ball diamond. Through the scope, it appeared one of the adults was feeding a young bird.

From here we drove a short distance north to Spruce Lake Bog. By now it was getting late in the morning, so we had only a few birds singing. We did have Veery, Nashville Warbler, and Alder Flycatcher, and a pair of Mallards on the lake but the White-throated Sparrows I usually have here were not to be found. As always, a bonus at Spruce Lake Bog is all the pink lady-slippers and pitcher plants in full bloom. 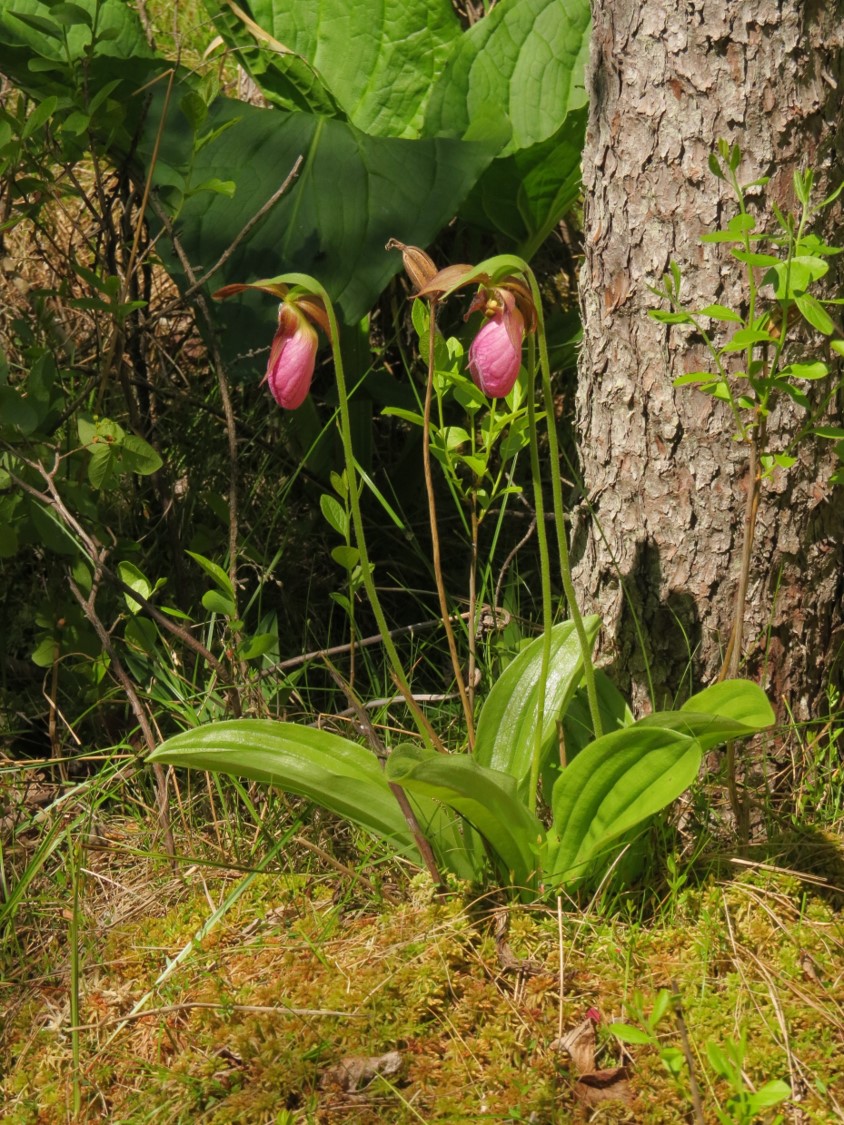 Because we hadn’t gotten to see Cerulean and Hooded Warblers, I decided to extend the trip and take the group to another reliable site for these two species; the Greenbush Picnic Area. Our drive to the Greenbush area passes through several pretty birdy areas. Along Shamrock Road there is a Wetland Restoration Project Area. Here we had a few Great Egrets, Mallard, Killdeer, and other common species. This site is also good for Hooded Merganser, Pied-billed Grebe, and other waterbirds but we didn’t spend much time searching the area.

As soon as we parked the cars at the Greenbush Picnic Area we could already hear a couple of Cerulean Warblers singing. Eventually, we found 3 individuals high in the trees right above the picnic area. Soon we all had fairly good looks at a couple of these birds. While looking for the Cerulean(s), a Hooded Warbler began singing just across the road from us. We all gathered near that area searching for the Hooded. We finally found the bird singing quite high in a tree affording everyone great looks at this handsome warbler. 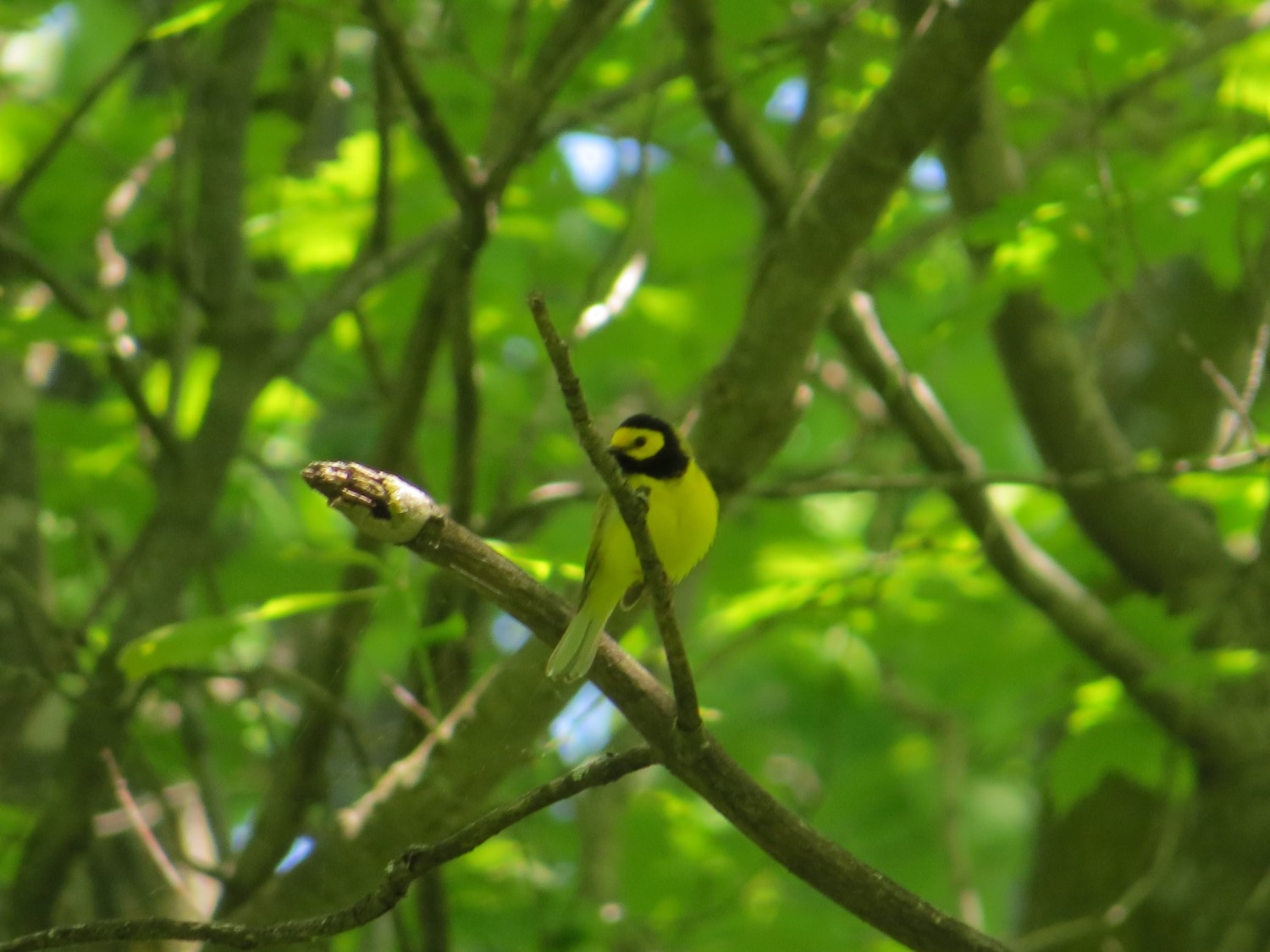 Hooded Warbler in the forest at the Greenbush Picnic Area. Photograph taken by Jeff Baughman.

Since we had the entire picnic area all to ourselves, we decided to eat our lunch here. What a treat it was to sit and eat your sandwich being serenaded by Cerulean and Hooded Warblers. We also saw a pair of Red-eyed Vireos mating, an Eastern Wood-Pewee carrying nesting material, and an Eastern Phoebe visiting a nest under the nearby picnic shelter.

After lunch, we tracked down a singing Scarlet Tanager and finally had the male singing right above our heads. A fitting end to a wonderful morning of birding. Fortunately, we still were able to see most of our target species. Our day netted 79 species, a somewhat lower total than I had hoped for, but we did hear or see 10 species of warblers and 7 species of flycatchers.

Thanks to everyone that attended. I sure enjoyed spending the morning with you all.