Many Peregrine Falcons in Wisconsin overwinter and those that do generally get a head start on the nesting season. Such was the case again this year with the first eggs of the season laid on March 26 and continuing on a regular basis through April 16. Of the 30 or so nest sites I monitor, there were a total of 80 eggs under incubation at 21 sites by mid April with estimated hatch dates from May 4 to 21.

Over the winter I was contacted by birders regarding longstanding Peregrine nests at two of the state’s power plants - We Energies Pleasant Prairie Power Plant (PPPP) in Pleasant Prairie and the WPS Pulliam Power Plant in Green Bay. Both of these plants have been decommissioned as power companies across the country are turning to new sources of fuel – natural gas, wind and solar.

Well before these plants were decommissioned, nearby suitable tall buildings were identified that could serve to replace the power plants as nest sites for Peregrines. After reviewing all the options, the site owners were contacted, brought on board, and nest boxes were installed at these sites in an effort to provide the Peregrines with nearby alternative nesting options. In the end, the goal is no net loss of nest sites.

The alternative site for the Pulliam Peregrines is the WPS office building in Green Bay where a new nest box was also installed. So far, this site is unoccupied. But Peregrines have been seen occasionally at the Pulliam site and, there is a lot of industrial “structure” in the area so at least for now, it’s unknown where this pair will nest this season. But – there are suitable options in the area.

As was the case in Britain when Peregrines were recovering, the vertical walls of rock quarries were occupied by nesting Peregrines and these sites continued to grow. Here in Wisconsin Peregrines have been observed at three quarries – the Wyalusing quarry, the Devil’s Lake quarry and the Racine quarry.

Thus far, young were produced at Devil’s Lake in 2015 and 2017 and at Wyalusing in 2017. At the Racine quarry, where viewing is limited, we have yet to confirm production, although Peregrines are observed there nearly every spring. This year on April 5, Eddie Feltes found an adult pair of Peregrines present along the same quarry wall where we found a single adult last spring so we’ll be going back again to see if the pair has remained and if we can confirm young.

For as long as I can remember each spring I get requests from the public asking where they can observe Peregrines. With many Peregrines nesting in urban settings where access is either difficult or impossible, answers to this question have been limited. But, there is a very unique opportunity now where the public can drive right up to a location and get in on all the action.

Here is a description of this opportunity provided by Alison Trouy of WEC Energy Group:

Picnic with the Peregrines

Picnic with the Peregrines at one of the best birding sites in the state!  At the We Energies Port Washington Generating Station, you can watch the activity both inside and outside a Peregrine falcon nest box at the same time.

We Energies has been providing a high-definition live stream of the Port Washington nest box since February, at https://www.youtube.com/watch?v=GVRg33qZZ94 but birders also can see the nest box from a public park near the generating station.

At South Beach Park, falcon fans can watch Peregrines swooping overhead and catching prey, and then use the live stream link on their smart phones to watch the birds feed their young. It’s the only nest box in the state where that’s possible.

This year, birders should be on the lookout for “Brinn” and “Beasley.”The pair has nested together at the Port Washington nest box for three years now. They currently are incubating three eggs that, if everything goes as expected, should hatch between May 4 and 6. That’s when activity will pick up as the adults begin feeding their young. The chicks should fledge and leave the nest by early July.

We Energies is part of a statewide effort to restore the Peregrine Falcon population. Since the early 1990s, the company has installed and maintained nest boxes at its power plants in Wisconsin and Michigan. Power plants make ideal nesting sites because of their height and proximity to water. Since the first successful nest in 1997, 273 Peregrine Falcons have hatched at We Energies’ facilities — 64 at the Port Washington Generating Station alone. 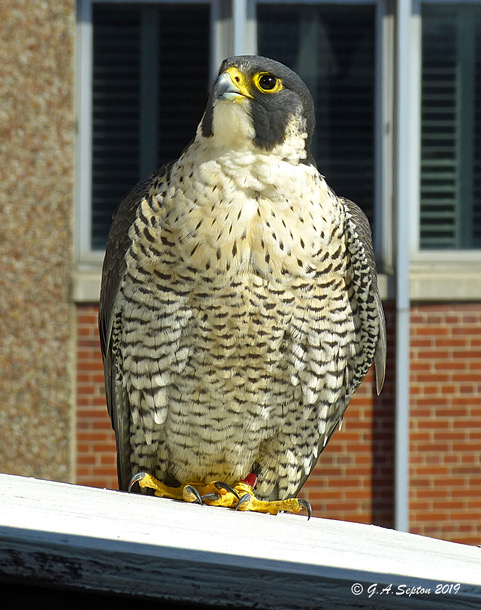 Photo by Greg Septon. “Olympia” atop her new nest box at the Froedtert South (Kenosha) Medical Center.
Olympia was produced in 2012 at the South Loop nest site in Chicago and is back at the hospital for a fifth year.
She is currently incubating four eggs with estimated hatch dates of May 12-14.


Greg Septon founded the Wisconsin Peregrine Falcon recovery project in 1986 and for more than three decades has managed a world-class restoration effort of the endangered raptor, banding more than 1,000 Peregrine chicks. In 2014, he received the Noel J. Cutright Conservation Award from the Wisconsin Society for Ornithology. The award recognizes outstanding contributions to bird conservation in Wisconsin.