It was a chilly but nice morning on May 4 at the White River Marsh, as birders began gathering prior to 5:00 AM. The temperature was about 38 degrees, but the winds were light and from the south – under partly cloudy skies. Jupiter and Saturn were on full display in the still-dim southern sky, and a number of us enjoyed views of both of them through a scope.

All around us, the dawning marsh was coming alive – with Wilson’s Snipe winnowing continuously overhead, American Bitterns “pumping” back in the cattails, as well as Soras, Swamp Sparrows, and Barred and Great Horned Owls were hooting. Sandhill Cranes periodically voiced their boisterous pair-proclamations, and at those times it was tough to hear anything else!

After initial introductions with the 28 attendees, and passing around the sign-up clipboard, our group began a leisurely hike along the gravel roadbed. Along the way we heard a few Virginia Rails and Marsh Wrens, and a little further down there were Sedge Wrens singing. Red-winged Blackbirds were everywhere, and Mallards, Blue-winged Teal and Wood Ducks would periodically wing their way past us. 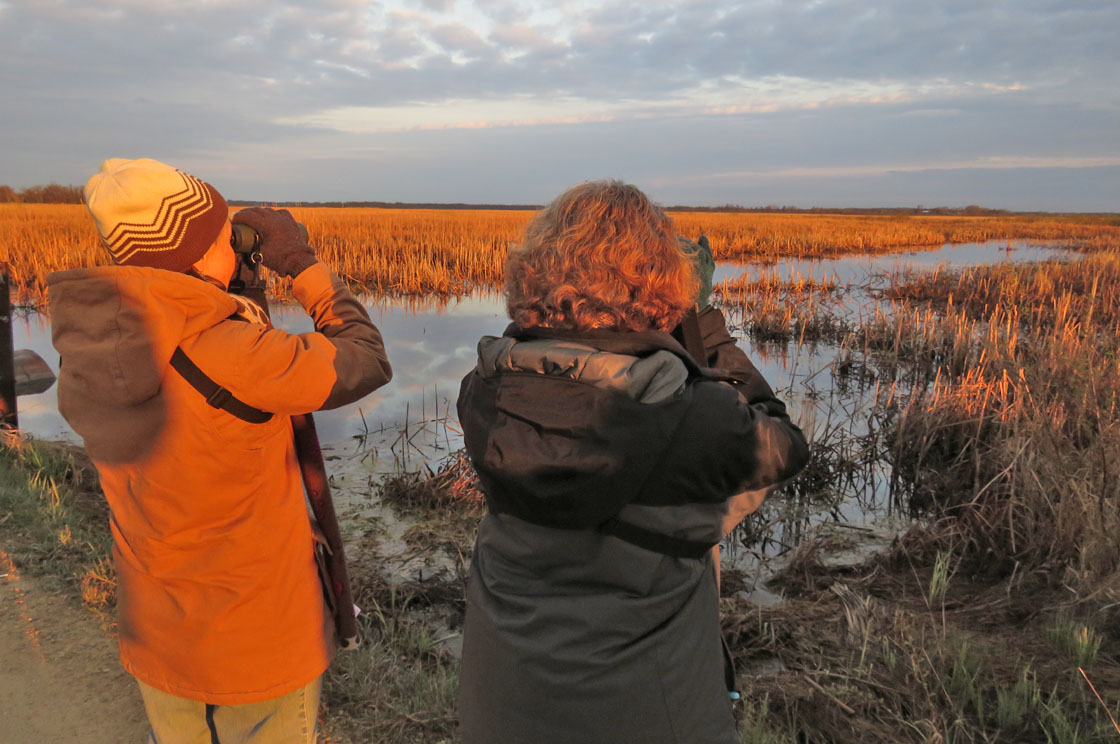 Not too far down we began to hear the loud, strident unison calls of the local Whooping Crane pair – the “Royal Couple,” as they are known to many. Their nest (for the third year) was hidden somewhere in the midst of the cattails. Later on, further down the trail, we were very pleased to spot one of them as he flew in and stood in the marsh – with his head and neck in view!

At one point an American Bittern flew in and landed among the cattails, but clearly in view – once you knew where to look. After several minutes it took off again, and provided nice flight views. Later on, what may have been the same bird was spotted as it stood right on the road – looking very out of place out in the open! 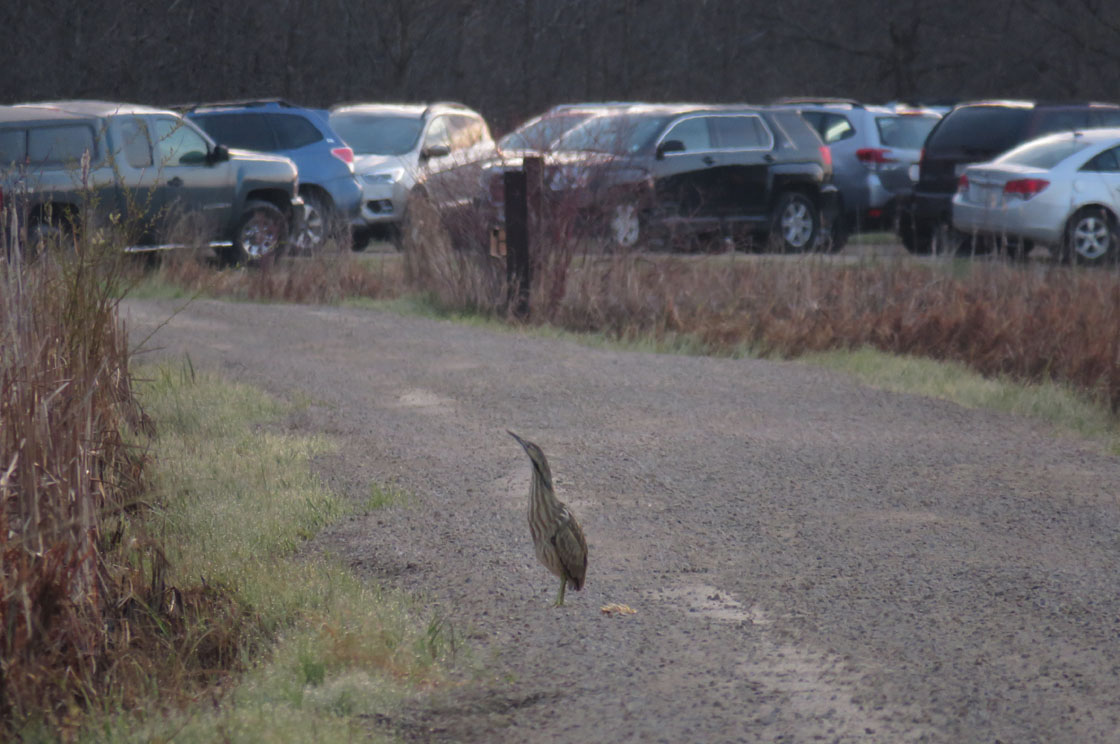 American Bittern out in the open in the road! Photo taken by Tom Schultz.

Along the way we also spotted Sharp-shinned and Red-tailed Hawks, and we heard Common Yellowthroats and Yellow Warblers singing from the dogwoods – the first of the year for many of us! A Green Heron flew in and landed in the trees of the oak island, providing decent looks for a time, until it decided to take off again. These trees also had Blue-gray Gnatcatchers and House Wrens.

After hiking back to the cars, we headed east to Big Island Road, adding Brown Thrasher, Eastern Meadowlark and Bobolink along the way. A Bald Eagle was perched in some distant trees, and several Forster’s Terns flew over a flooded area near the Fox River.  We stopped at a grassy meadow and heard several Henslow’s Sparrow singing, but unfortunately all were hidden from view. A little further down, however, another Henslow’s perched cooperatively, and we were able to get excellent scope views as it chirped its cricket-like song.

Arriving back on Hwy. D we headed west through extensive marsh and grasslands, and added American Kestrel to the list. Several Sandhill Cranes were feeding not far from the road, and a Northern Harrier flew past.

We stopped at a DNR parking area a little east of the White River, and hiked back to a small flowage. A Belted Kingfisher was spotted as it perched and hovered there, and Eastern Towhees and Yellow Warblers sang from nearby shrubs and trees.

Continuing down D across the White River, we pulled into another parking lot and walked back along the road toward the bridge. A Northern Parula was heard singing high in the trees, and after a short search we were able to get good looks. Several Yellow-rumped Warblers were also present there. The rest of the woods were pretty quiet, though. 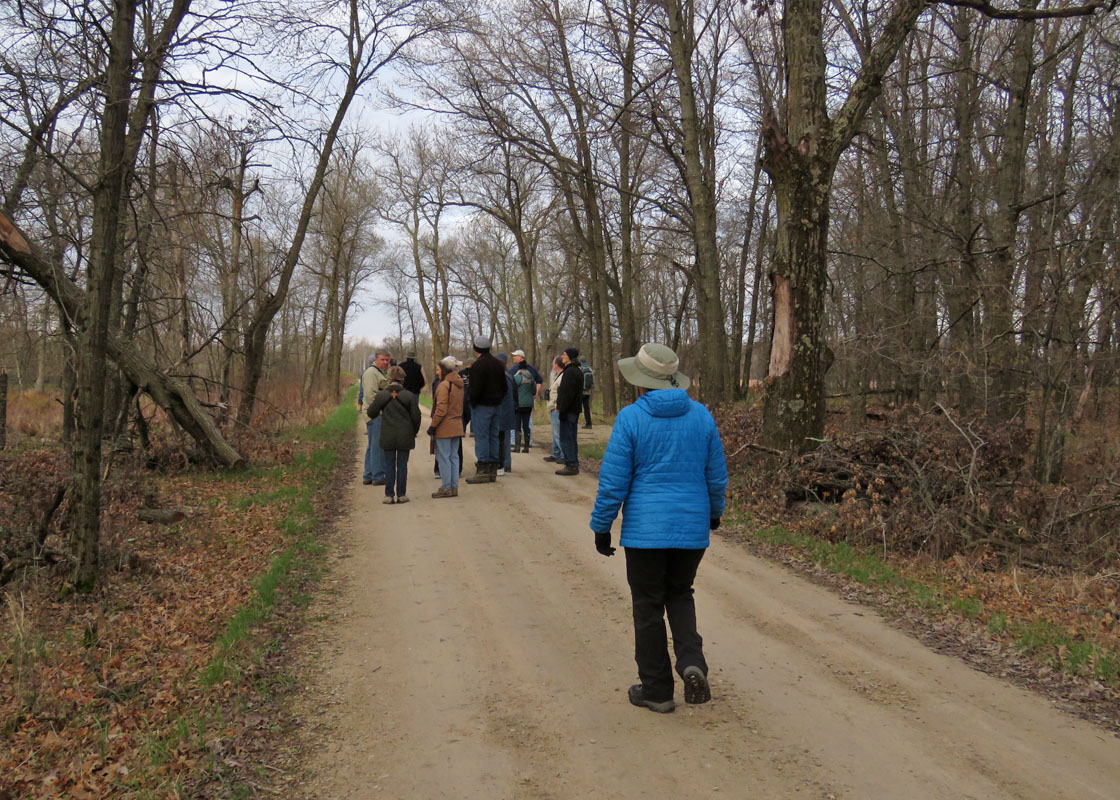 Our next destination was a prairie restoration on Dead End Road, where we had a Field Sparrow, an American Kestrel, and several Tree Swallows. Unfortunately, we were unable to detect our main target bird there – the Grasshopper Sparrow. Another dead end road off the Rustic Road had several Hermit Thrushes, and we had good looks at a singing Pine Warbler there.

We continued on to Princeton, where the group stopped at a BP gas station for a rest break. A pair of Ospreys was observed just across the street – atop their stick nest at the high school football field.

The next stop was at the village of Marquette, at a boat launch that overlooks Lake Puckaway. The water was fairly high, but we spotted spotted a few birds – including American White Pelican, Double-crested Cormorant, Ring-billed Gull, Forster’s and Common Terns, and also Great Egret, along with a few ducks.

From there we drove through the northern portion of Grand River Marsh, where we had good looks at another Great Egret, and heard several more Yellow Warblers and Common Yellowthroats. In the interest of time, we decided not to make any stops, though.

We arrived at Lake Maria County Park a little after 12:30 PM, and immediately spotted several warblers up in the trees near the boat landing – mainly Yellow-rumped and Palm, but we did find a female Pine Warbler also. The lake had lots of ducks on it, including hundreds of Lesser Scaup and Ruddy Ducks and a nice variety of others. About 40 American White Pelicans were clustered along the southern shore, and about a dozen Forster’s Terns were flying about. We were very pleased to spot an Eastern Kingbird in the nearby trees.

Our final destination was a large pond on Lake Maria Road, and we quickly spotted a pelican swimming about. Closer looks revealed a variety of other waterfowl, including Blue-winged Teal, Gadwall and Northern Shoveler, and a Pied-billed Grebe was spotted.  A few shorebirds were also present, including a Killdeer, a Greater Yellowlegs and a few Lessers. Several Great Egrets and Great Blue Herons were also observed.

We wrapped up the field trip a little before 1:30 PM. It had been a great morning, with a grand total of 94 species spotted along the way. Thanks to everyone who participated!