The morning was fabulous, with clear skies, light winds, and a starting temperature around 27 degrees as our group gathered at Goose Pond on March 23 – which was our 2nd possible date for this trip. The ponds there were still frozen, although there was a bit of open water on the north side. Due to that factor, we and the 25-30 attendees didn’t linger too long at the meeting point, and we drove up to the north side of the area where many more waterfowl were present in a flooded area adjacent to the west pond. 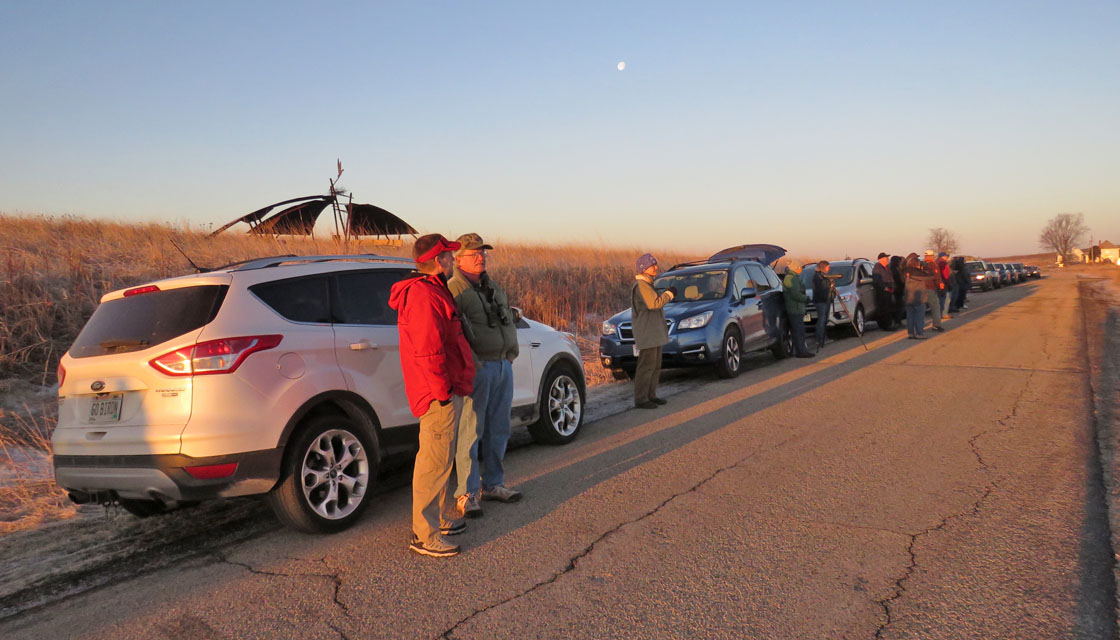 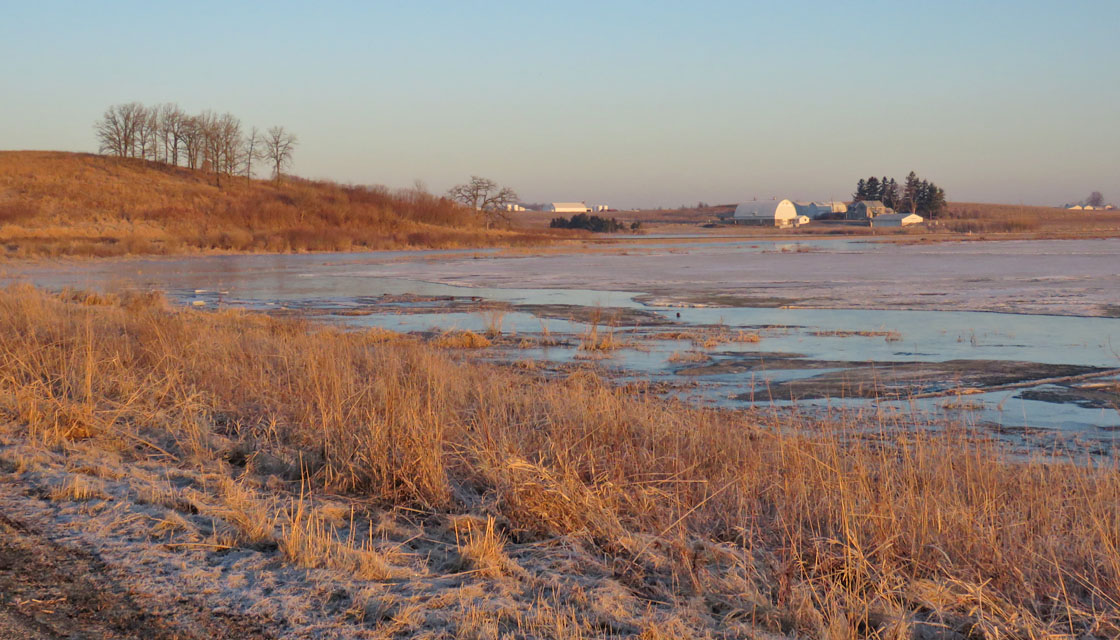 Here we found a very nice variety of ducks, including Northern Pintail, Green-winged Teal, Ring-necked Duck, Lesser Scaup (and a lone Greater), Canvasback, Redhead, and others. Lots of Canada Geese and a few Greater White-fronted Geese and Tundra Swans were also present. A nice surprise was an Eastern Meadowlark that was calling in the field behind us. All at once, most of the waterfowl suddenly departed, so it wasn’t long before we moved along.

The next stop was at some large ponds (extensively flooded fields) along Harvey Road, just north of Hwy. 60. A number of Tundra Swans were noticed immediately, along with Canada Geese, and then we were pleasantly surprised by spotting a Ross’s Goose standing in the pond to the east. Soon after that, a lone Snow Goose (blue morph) was also spotted – sitting atop a cut cornfield to the west, in the company of several tiny Cackling Geese. 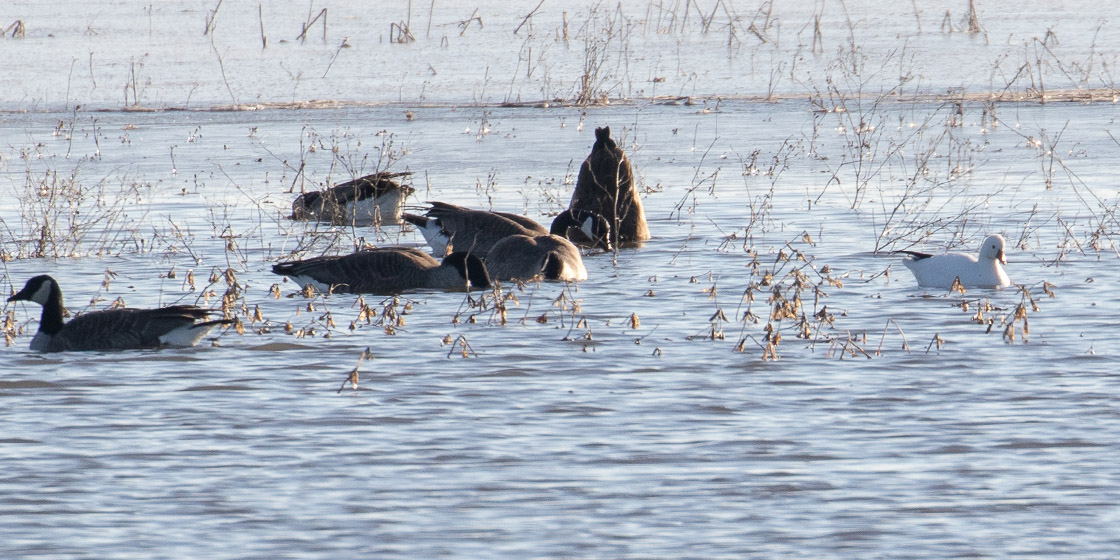 Lots of ducks were also present, although most were well off to the east and badly backlit by the rising sun. Just as we were about to move to the next destination, a large flock of Greater White-fronted Geese (perhaps 60?) took off from the cornfield to the west, probably from where they’d been hidden from sight – just beyond the hill. A large flock of Sandhill Cranes was present in a field well to the east. 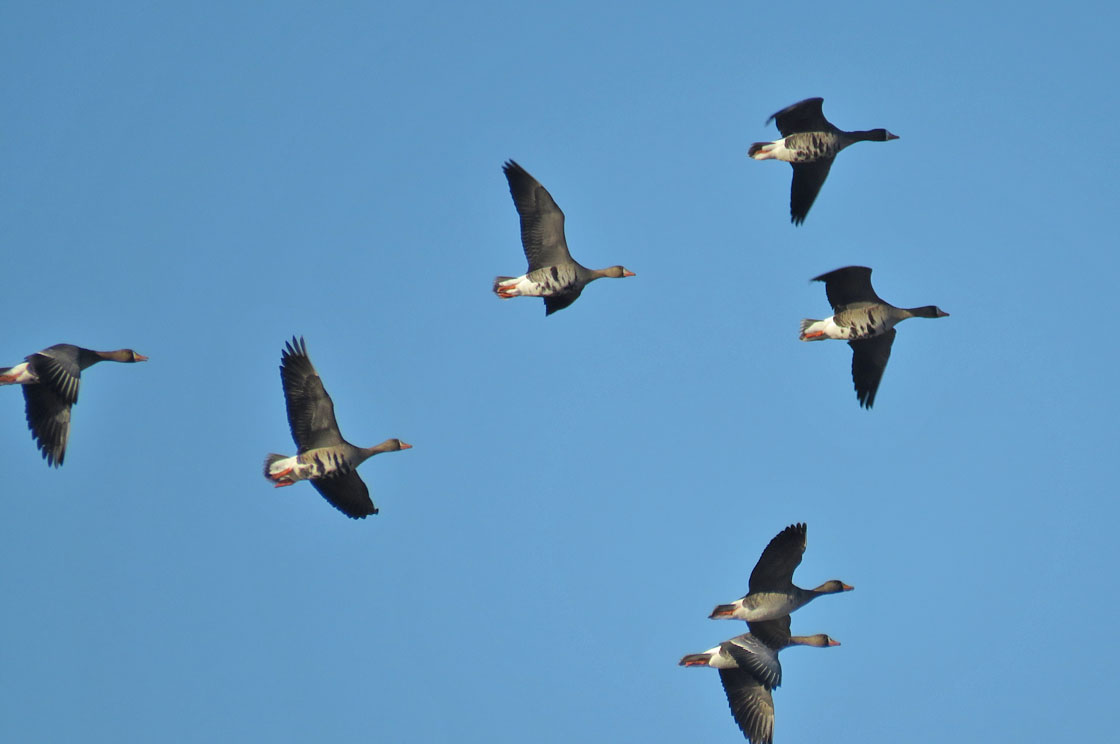 From there we headed south to a large flooded area along Wangsness Road, to the south of Hwy. DM. This spot normally holds water in the spring, but with the recent heavy snowmelt and rain showers,  the flooded area this year was especially extensive. Quite a few divers were present, including good numbers of Canvasbacks, Lesser Scaup, Ring-necked, Bufflehead, Redhead, and a few Common and Hooded Mergansers. Several dabblers were also observed, including Mallard, Wood Duck, American Wigeon, Northern Pintail, and a lone Blue-winged Teal was spotted. At least 70-80 Tundra Swans were also present. 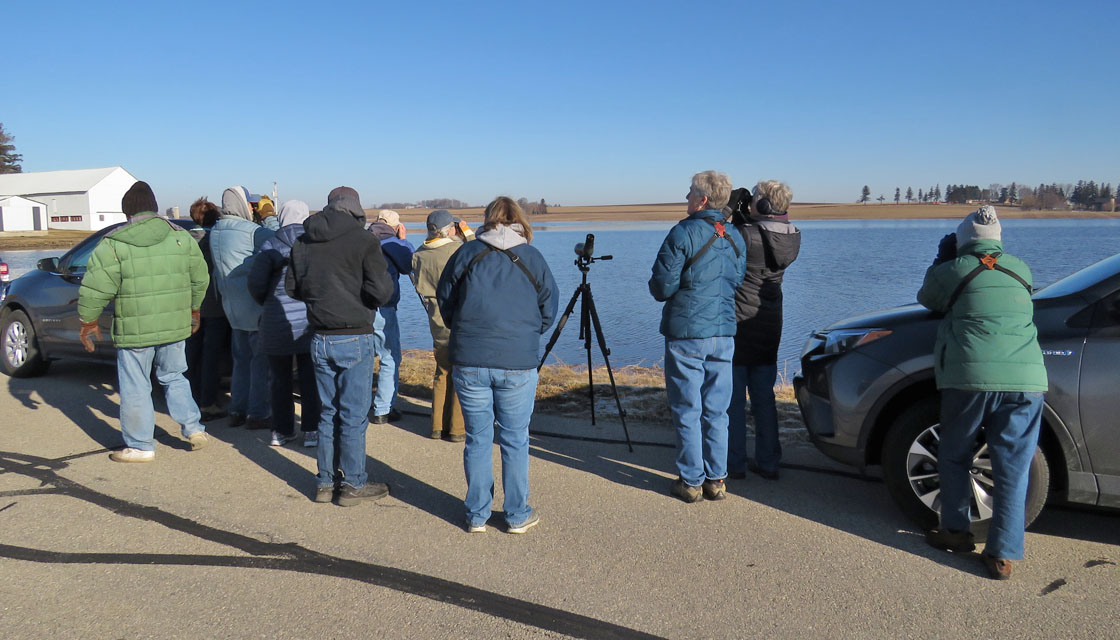 Our next stop was in the village of Arlington, where we spotted a few Eurasian Collared-Doves, cardinals, and several other species. A neighbor lady was curious about what we were looking at, so some of the participants showed her pictures in a field guide!

We continued north to Poynette, then took Hwy. CS to the west. Following a rest stop at a BP station, we drove to Lake Wisconsin – and parked along the Hwy. V causeway. The main portion of the flowage (on the west side) was still frozen, but most of the water to the east was open. Another nice raft of Canvasbacks was visible as we arrived, accompanied by a mixture of other diving ducks. Further back and nearer to the cattails were lots of other ducks, including quite a few dabblers – including Northern Pintail, American Wigeon, Gadwall, and Green-winged Teal. A couple of near-adult eagles were perched not far away.

Our final stop, about 10:45, was at Rowan Creek Park – which was back toward Poynette. Our 15 cars all squeezed into the parking lot, and we got out to look and listen for woodland birds. Our target bird here is usually Tufted Titmouse, and it didn’t take long to find a couple. Some of the group hiked the partially-icy trail down to an island covered with large pines, where we found a couple of Pine Siskins. Song Sparrows were heard calling, and a Cooper’s Hawk passed overhead. After about an hour there we called it a day – with the temperature reaching about 45 degrees. 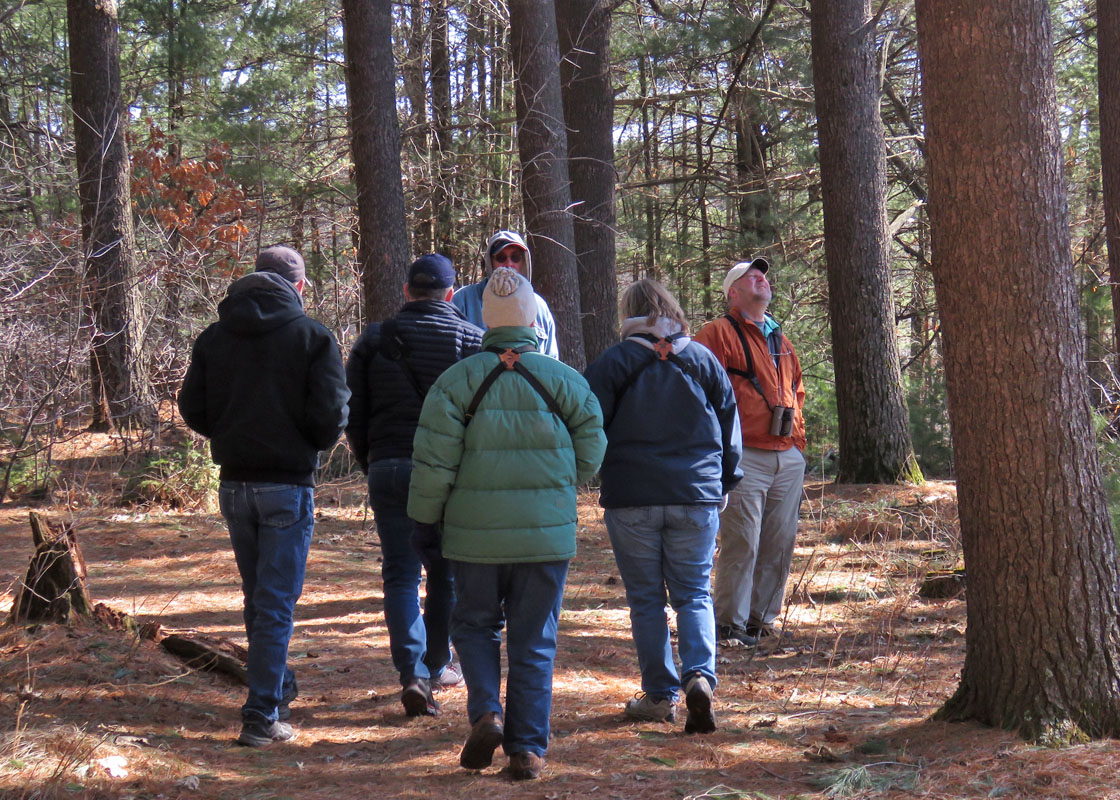 Everyone had a great time getting out in the sunny and seasonable weather, and a very nice variety of waterfowl had been found – along with a few new spring birds. Thanks to Jeff Baughman for co-leading this trip!