WSO would like to congratulate all the BIGBY birders of the state — for the many miles they put on their bikes and feet, and for the birds they found, photographed and eBirded. They can be proud of their accomplishments.

Here are the 2018 Champion BIGBY birders and their stories:

FIRST PLACE goes to Emily Weiser of Onalaska in La Crosse County. Biking 2,136 miles and hiking 59 miles to see 238 birds is amazing! It is always special to read her posts and get a sense of the birds being seen on the “western front” of Wisconsin when so many of us live more easterly. She also has a wonderful blog (http://birding-by-bike.blogspot.com) that is both interesting and entertaining. 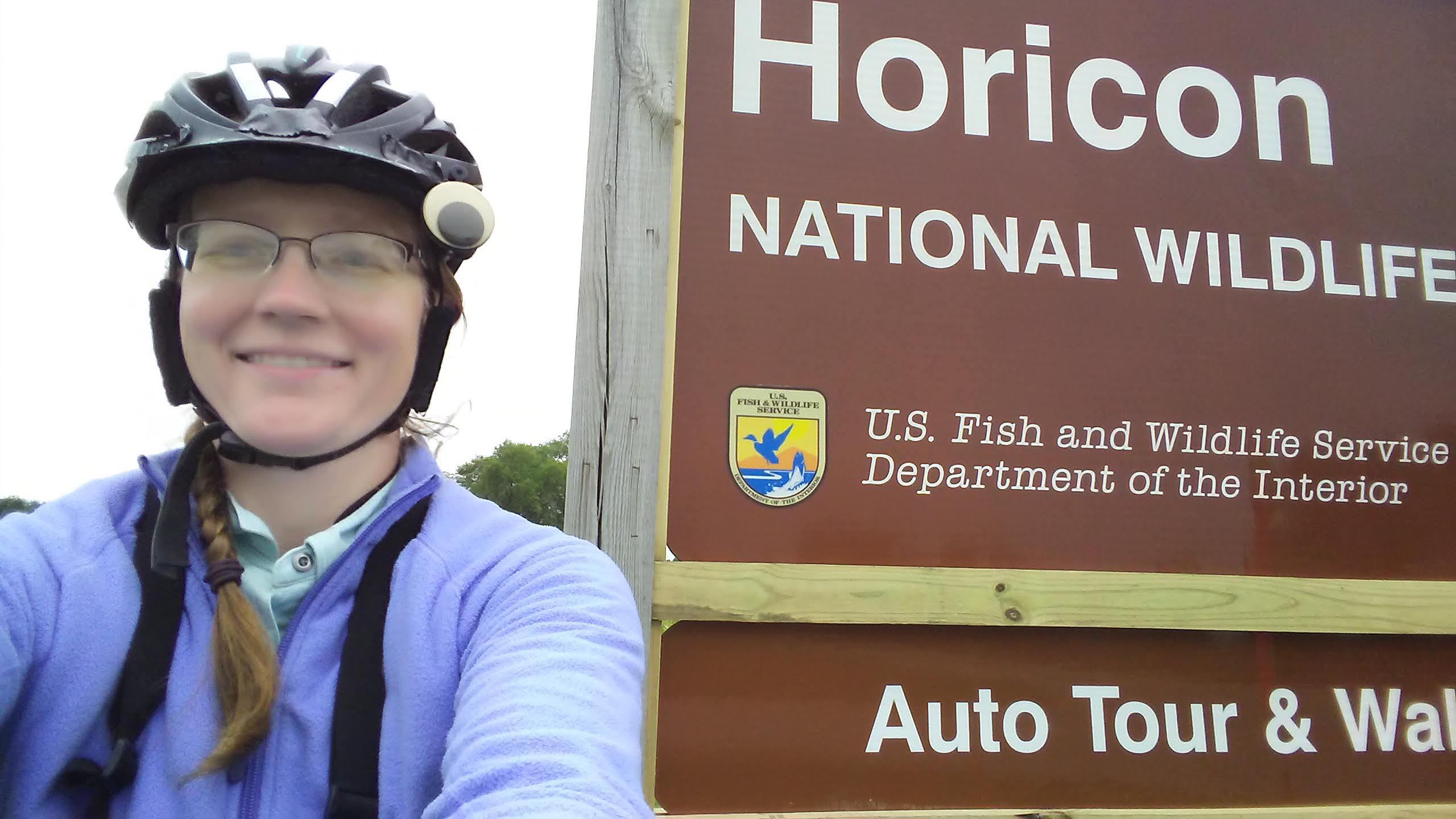 “I started birding by bike in Kansas a few years ago (where I might have been the only one doing so!) and was thrilled to join the Wisconsin Green Birding Challenge when I moved to La Crosse in late 2016. In 2017, I bike-birded all over La Crosse and Trempealeau Counties and loved getting to know the area. I set out to make 2018 a “Green Big Year,” or at least as big as it could be considering I was working full-time! I definitely had big plans, and not all of them worked out (late spring snowstorms, Lyme disease and thunderstorms got in the way). But the biggest one did: a 12-day, 547-mile trip with Horicon Marsh as the capstone!

“The year got off to a strong start with a Townsend’s Solitaire on Jan. 1 (continuing locally since another birder found it in December), Carolina Wren, flyover Red Crossbills, a Snowy Owl and a Hoary Redpoll that was generously shared by a local homeowner in February. In late March, a gizzard shad die-off attracted a spectacle of 10,000 gulls to the melting ice on the Mississippi River and Lake Onalaska, including at least 5 individual Iceland Gulls (alas, we can no longer count Thayer’s and Kumlien’s separately, but they were both there!) and 2 Lesser Black-backed Gulls. Those gulls are big news for this area, and they were on my bike-commute to work! A surprise Ross’s Goose trying to blend in with the gulls, an obliging Red-necked Grebe found by another birder, and a White-faced Ibis that I happened across rounded out the good waterbirds for early spring.

“Spring migration was also remarkable in having consistently good warbler days for about two weeks straight, and I found two lifers within a few miles of home: Canada Warbler and Connecticut Warbler. I heard the Connecticut while biking down the road during my Green Big Day on May 22 (which somehow netted 123 species over 68 miles!). I never would have heard that bird if I’d been in a car, so Green Birding can have some real advantages! I also got my first looks at two beautiful species that were heard-only lifers in 2017: Cerulean Warbler and Hooded Warbler.

“Horicon Marsh was the number one destination for the year, so I was thrilled to get there in early August (and then make it home safely and under my own power!). That trip added 18 species to my year list, only one of which I saw later in my home county. Not a very good species-per-mile ratio, but the trip list included Red-necked Phalarope, Buff-breasted Sandpiper, American Avocet, a bunch of other shorebirds that didn’t come through La Crosse this year, and Common Gallinule. Other highlights of the trip were Common Raven and Western Meadowlark around Buena Vista Grasslands (alas, no chickens showed that day). Biggest miss of the year was the state-first Sharp-tailed Sandpiper that was reported at Horicon Marsh just 2 days after I left! Overall, that trip went surprisingly smoothly, and I loved the rhythm of packing up camp, biking 50-60 miles with occasional stops (or full days “off”) for birding, setting up camp, and doing it all again the next day.

“Fall migration brought some good surprises locally, with a Sanderling near my office, a Harris’s Sparrow, La Crosse County’s second-ever LeConte’s Sparrow and a Surf Scoter. A pair of Long-tailed Ducks stayed long enough for me to see them, and I finally got my nemesis bird of the year – Northern Shrike – on Dec. 29!

“La Crosse County is definitely under-birded, so I think some of those rarities come through more frequently than we realize – plenty of low-hanging fruit for a local green birder to tally up.

“I submitted 268 checklists to eBird in 15 Wisconsin counties, and logged several breeding confirmations for the Atlas. Every mile was worth it, even if some were disappointingly unproductive species-wise, because I still got to get outside, slow down and immerse myself in the birds’ world.”

SECOND PLACE goes to Scott Baughman of Waupun in Dodge County. He certainly kept Emily on her toes (and on her bike) and ended up with 235 birds, traveling 1,452 miles by bike and 42 on foot. Here is his summary:

“My 2018 BIGBY travels didn't take me too far from my home. Living so close to Horicon Marsh has its advantages. Most of my biking miles were done within 25 miles (round trip) of Waupun. I averaged 4 or 5 trips a week to the marsh.  I took one longer trip to Sheboygan in May. Then I took another shorter trip in June to Fond du Lac and the Northern Unit of the Kettle Moraine.

“Probably the highlight of my year was adding the Sharp-tailed Sandpiper at Horicon to both my life and BIGBY list. It was a fun year and my motivation to keep moving was to try and stay a couple birds ahead of Emily! She got me in the end though. My total of 235 birds was three more than I saw in 2010, my first BIGBY Year and the most birds I have seen in a single BIGBY Year.” 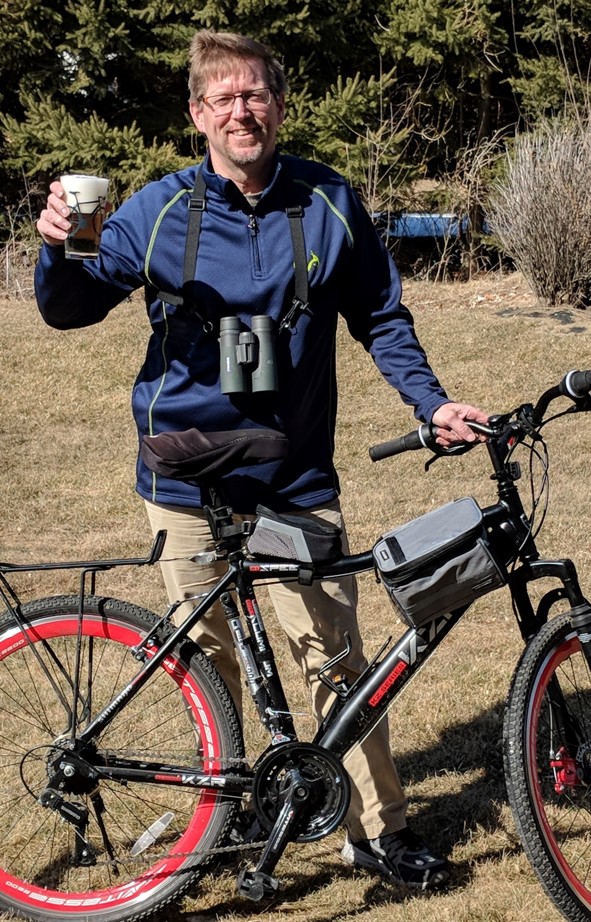 THIRD PLACE goes to another dedicated BIGBY birder, Steve Thiessen from Stoughton in Dane County, who racked up 213 BIGBY birds, traveling 763 biking miles and 40 miles on foot. Here is his summary:

“I’m 66 and work second shift at Meriter Hospital in Madison.

“Stoughton seems like a so-so birding spot, but offers a variety of habitat, which in turn gives me lots of options. I love a chase, and really need a reason to get out and bike. Once out, I keep thinking of spots to check.

“This year started out fun with different groups of redpolls to checkout. I over-analyzed every redpoll that would hold still! Gotta love those birch trees.

“The most interesting bird for me was probably a spring Le Conte’s Sparrow. It popped up in the same small flat wet grass area as the last one I saw, last fall which was very interesting.

“Early summer is the time I bird the least. With bad hearing, I have low expectations but as soon as the shorebirds start coming back in July, I’m back to chasing the birds I missed in the spring. There are ALWAYS birds you miss (and miss and miss). Like any list, BIGBY gives me another reason to get outdoors and let my mind wonder as I bike to another spot.”