We had been concerned about the bitter cold forecast, and even posted a warning on the WSO website a few days ahead… but the reality on the morning of January 26 was even worse. The temperature on the drive over to the Buena Vista grasslands dropped down to -27 degrees at one point!

Due to this brutal cold snap, we really weren’t expecting anyone to show up, but as we arrived at the kiosk a little before 8:00 AM, a car was actually there waiting for us! A couple from West Bend had driven up to join the field trip, so with the three of us in our car we reached our attendance total of five. We waited there for about 10 minutes to see if anyone else might arrive, but that turned out to be our group. 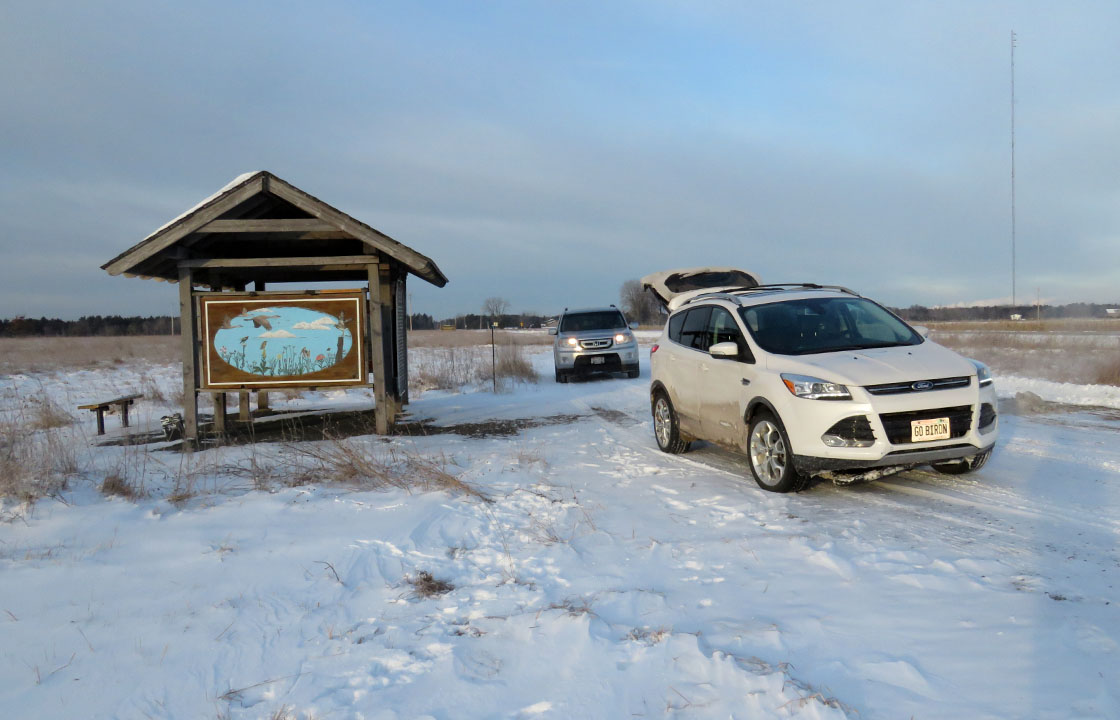 Prior to the field trip our car had spent about an hour scouting the area, and we’d found a nice flock of prairie-chickens (about 50) and a couple of Northern Shrikes, so we were hopeful as we headed out – with an air temperature of -22 degrees. Our saving grace was that there wasn’t much wind, and there was a weak sun shining and producing two small rainbow sundogs. Fortunately, there wasn’t much snow on the ground – only about 4 inches – so there was little drifting and the roads were good.

We took Hwy. W to the east, then turned south on Townline Road, where we found a few Horned Larks and American Tree Sparrows. We added Northern Cardinal, Blue Jay, and European Starling (only one of each) to the list before we turned east on Swamp Road. We were hoping to re-locate that prairie-chicken flock and even made a short run down Elm Road to look through a large field of cut corn, but unfortunately, we were unsuccessful. That area did produce a Northern Shrike and a Rough-legged Hawk, so we didn’t entirely strike out.

We turned south on Taft, then took Saddle Sore Lane east, where we found an immature Bald Eagle that cooperatively remained perched for us. Driving into Bancroft, we stopped to take a short restroom break at the Citgo station – then we continued east on W and turned north on Hwy. JJ, where a Pileated Woodpecker made a brief fly-by, and a small group of Wild Turkeys crossed the road ahead of us. 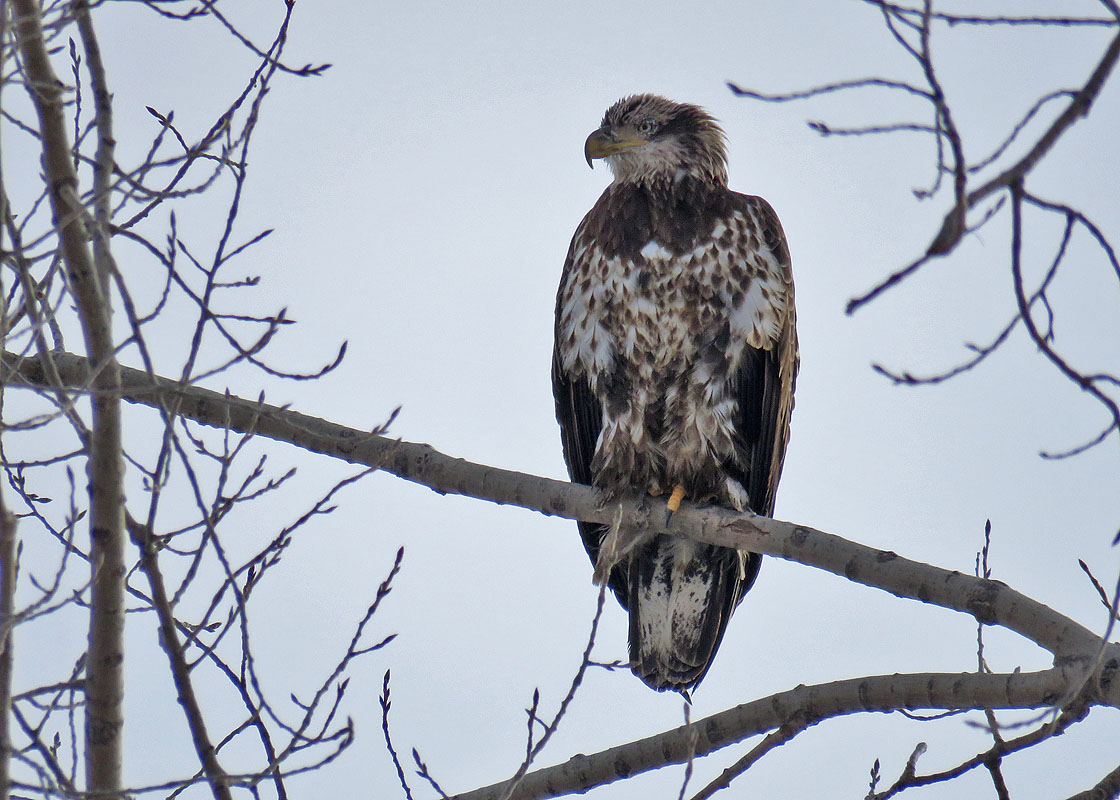 We took Coddington Road west to Taft Road, where a few chickadees and a Blue Jay were present at some feeders, then took Lake Road to the west – which was entirely desolate. After turning south on Townline Road, we encountered a couple of Common Ravens perched in a tree near Hwy. W. The temperature was now sitting at -9 degrees.

Continuing south on Townline, we encountered few birds until we reached a house with feeders (near the intersection with Woodland Lane), and we were pleasantly surprised to find two Red-headed Woodpeckers! Also present were both species of nuthatches, and an assortment of other feeder birds. 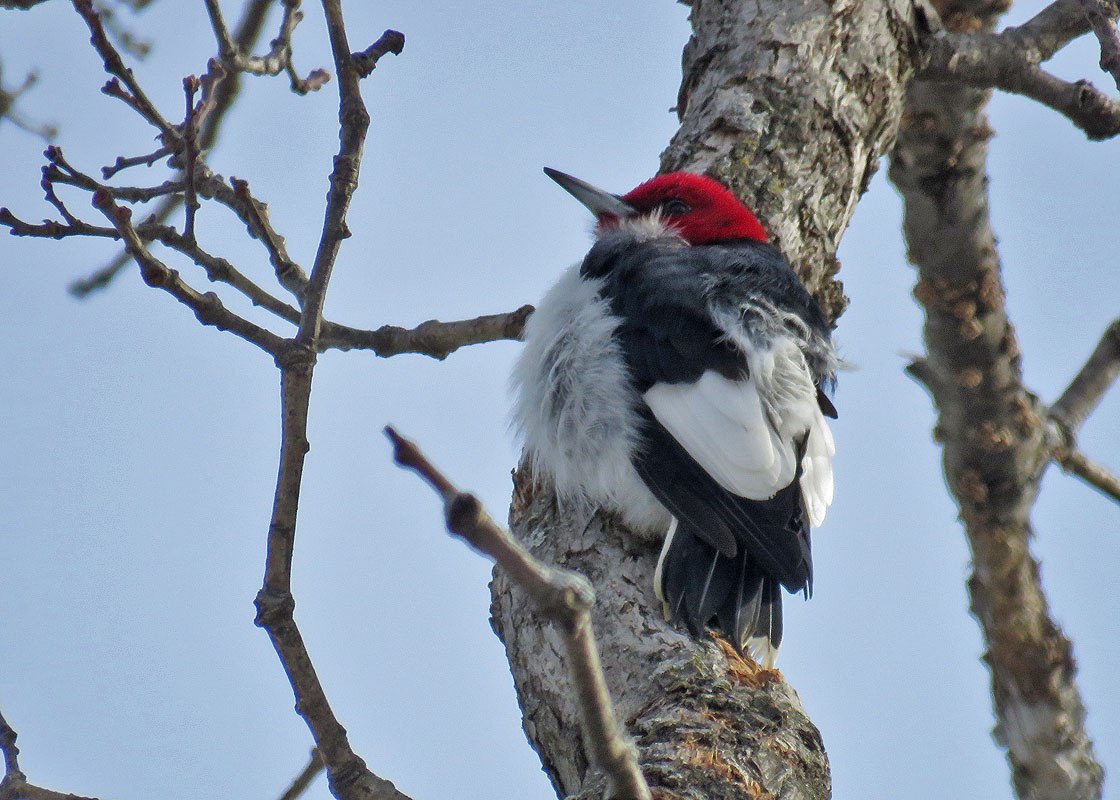 Checking out the Red-headed Woodpeckers at Townline Road. Photographs taken by Tom Schultz.

Around 10:30 AM we headed west on Tower Avenue toward Nekoosa, and continued then on toward Ball Road, skirting the south boundary of Sandhill Wildlife Area. This road was largely devoid of bird life, but we had another Pileated Woodpecker along the way, and a Bald Eagle soared past to the north.

Reaching Cranberry Road we turned south, and soon spotted a Rough-legged Hawk perched in a small tree to the west, followed by another on the east side a short time later. A lone Blue Jay supplied the only other bird life before we turned west on N. Bear Bluff Road. 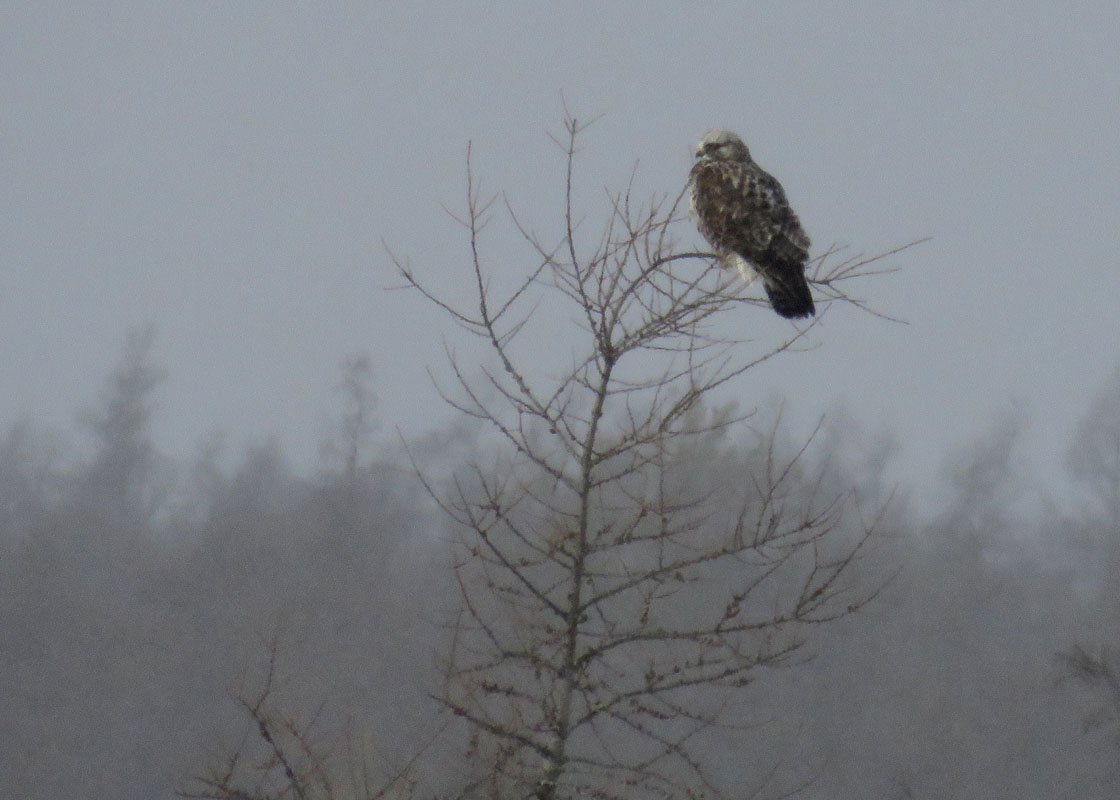 By this time there was steady light snow falling, making it tougher to spot distant birds. We were hoping to look for Golden Eagle in the Bear Bluff area, but the weather was certainly not conducive to that. We spotted a small group of Wild Turkeys, but little else of note was found as we took E Bear Bluff Road to the west, and then Goodyear Road back towards Mather, and the light snow continued to fall.

We took Hwy. H south along the west side of Necedah National Wildlife Refuge then east on Hwy. 21, and we spotted three eagles. Two of them were definitely Balds, but the third could well have been a Golden – but frustratingly, the bird disappeared behind trees before we could get good looks.

After a brief rest stop in the town of Necedah, we finished our day at the observation area near Petenwell Dam, where many Bald Eagles were present. We counted at least 40 individuals, along with well over 100 Common Mergansers and a few Common Goldeneyes. Two Pileated Woodpeckers were also present, with one of them flying across the Wisconsin River while we watched. 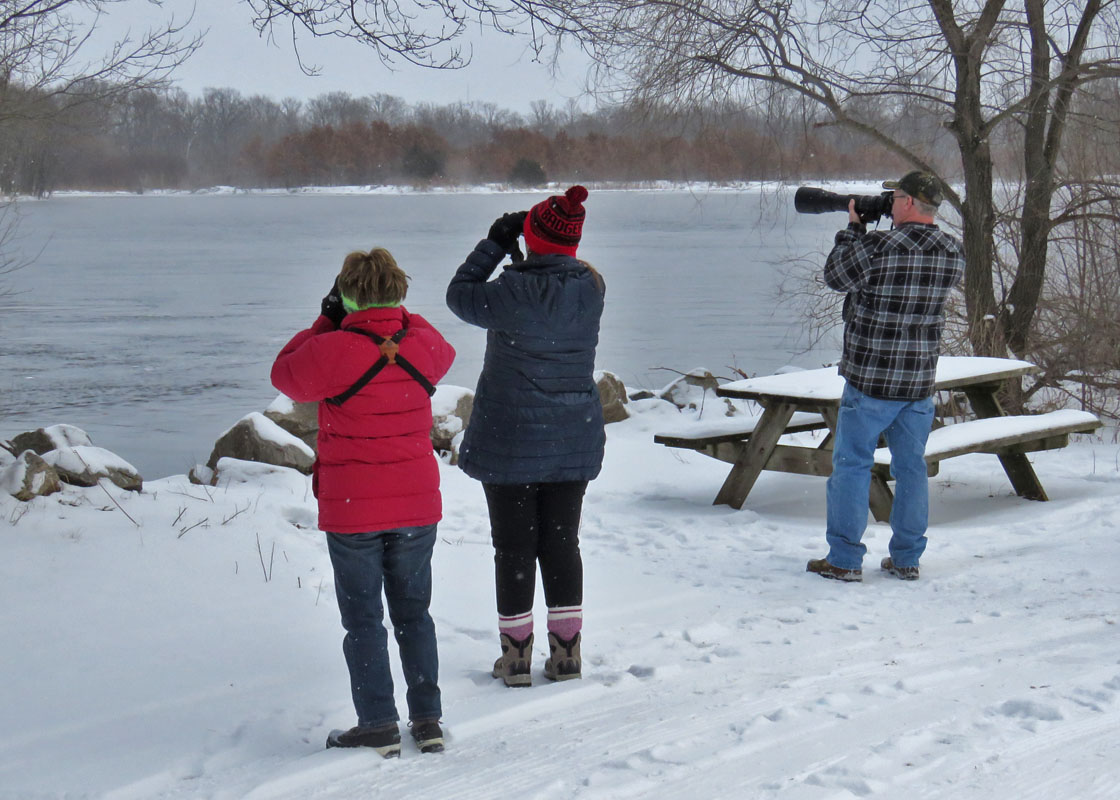 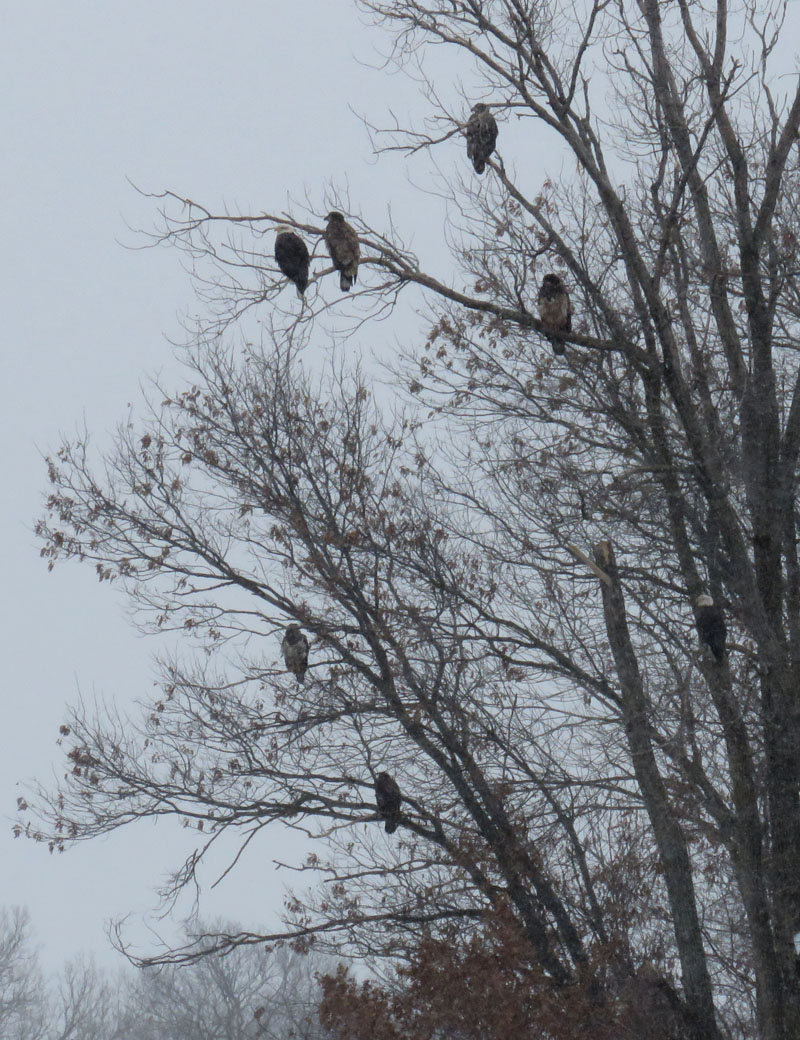 Enjoying a group of Bald Eagles at the Petenwell Dam. Photograph taken by Tom Schultz.

The temperature was up to a “balmy” 3 degrees as we wrapped up our field trip just after 2:00 PM. Our hardy group of five had survived some bitter temperatures, although we had certainly spent most of our day inside our warm vehicles! Thanks to Jeff Baughman for co-leading the field trip. 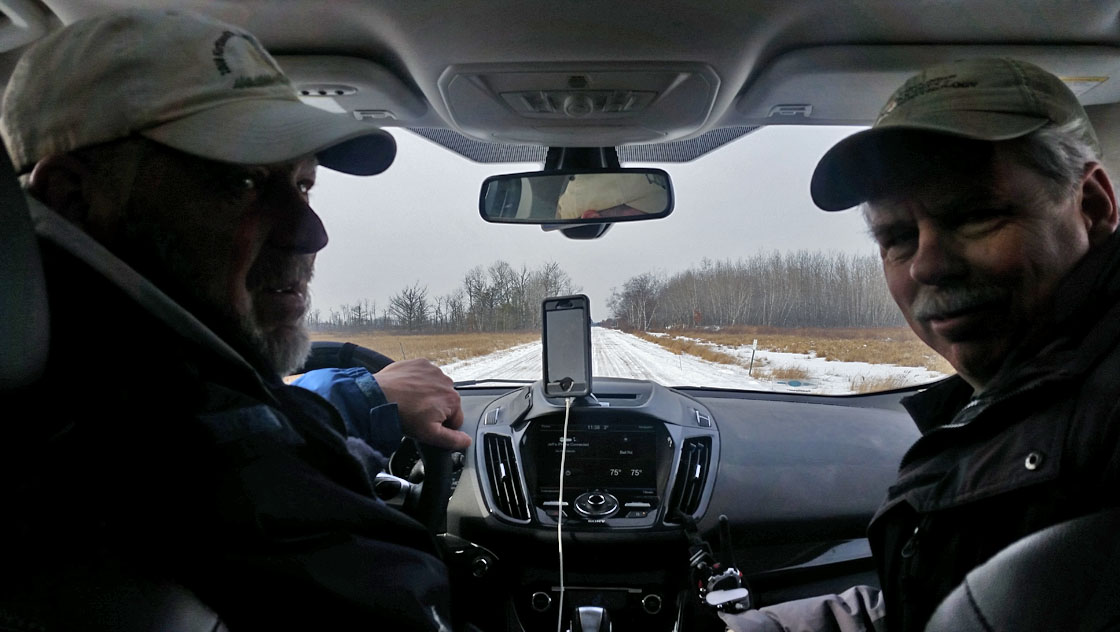