The temperature was relatively mild (in the low to mid 30’s) on January 12, but it sure didn’t feel like it – with a strong wind blowing in off Lake Michigan that really dropped the wind chill! Birders began gathering prior to 8:00 AM at South Shore Yacht Club, and the group eventually reached about 40. The first excitement of the morning was provided by an adult Iceland Gull, which was perched on a storage box on one of the piers, followed shortly by an adult Peregrine Falcon, which flew in and perched on another post. During this same time, an adult Great Black-backed Gull flew past over the breakwater.

The waters of the harbor were completely open, due to the above-average temperatures through most of December and early January, so there were some waterfowl present – including Common Goldeneye, Greater Scaup, Red-breasted Mergansers, Mallards, and a few Canada Geese. 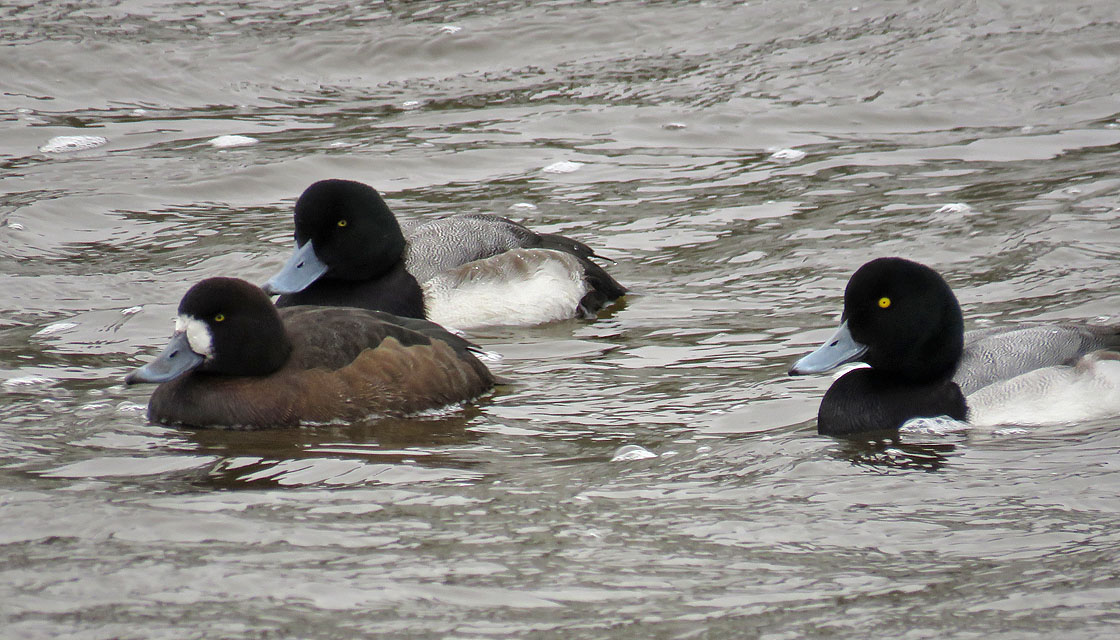 Greater Scaup swimming along the water in Sheboygan. Photograph taken by Tom Schultz.

Around 8:40 the group headed north along the lakefront to McKinley Marina, where part of the harbor was frozen, but the outer portion had open water. Some ducks and gulls were present, but the numbers were down substantially from what had been there earlier, and then we saw why – a Bald Eagle was standing out on the ice! It had obviously flown in and flushed out most of the gulls that had been present just an hour ago.

We continued north to the North Point Snack Bar area, and spent a little while scanning the lake. Most of the ducks present were Common Goldeneye, but a few Bufflehead and Greater Scaup were visible from time to time among the rolling waves.

Just down the shore was a stop at North Point, where lots more goldeneyes were present, as well as a few scaup, Buffleheads and mergansers. We were hoping to spot scoters here, but the strong winds coming off the lake and rolling waves made observation very tough!

Our next destination was Port Washington, initially at Coal Dock Park. Most of the harbor had open water, and there were ducks scattered about – especially distant ones along the north breakwater. A Red-tailed Hawk was spotted soaring over the marina, but not many gulls were present. Several of us walked out far enough to view the lagoon, and found lots of Mallards and several American Black Ducks, along with Greater Scaup and a couple of Buffleheads.

A couple of Long-tailed Ducks were spotted flying well offshore, followed by another one a short time later. We were told that a Snow Goose had been observed with Canadas a couple of miles south, we drove down that direction to look for it, but unfortunately that flock had apparently left before we got there, so we turned around and headed back to Port Washington – this time checking the marina. We found that there were not many ducks were present this year, so we headed north to Sheboygan. 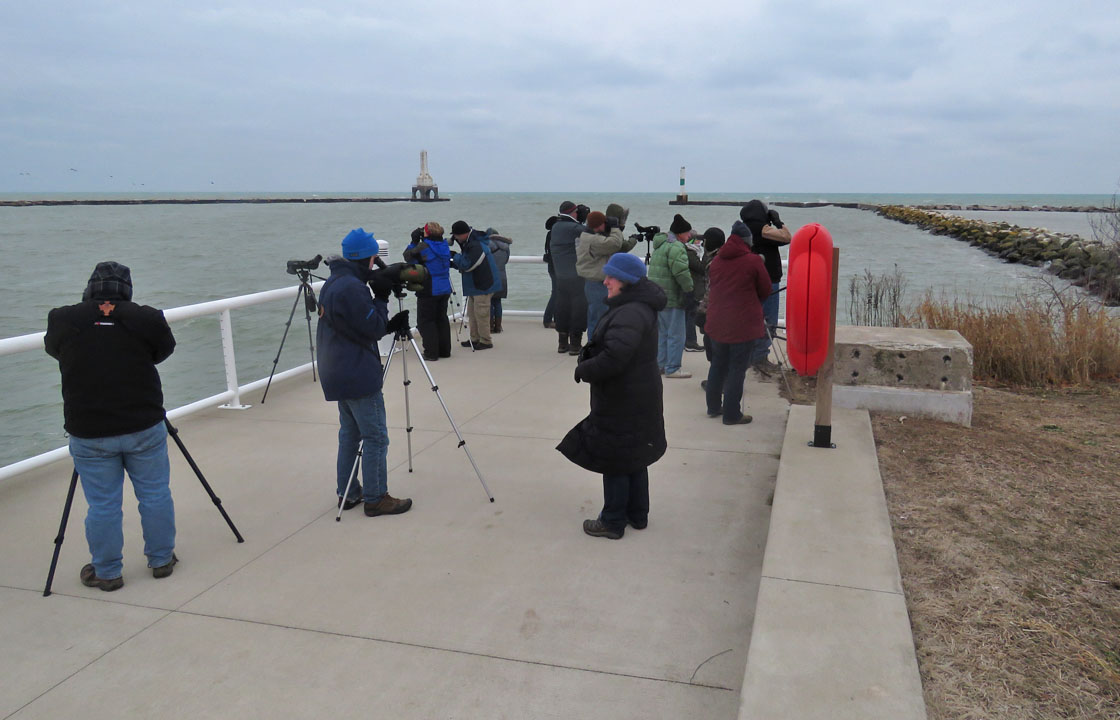 Our first destination was near Blue Harbors, on the south side of the river. Besides a variety of ducks, we initially spotted a Great Black-backed Gull standing on the ice across the river, and then taking a closer look we were able to pick out four others among a flock of nearby Herring Gulls. An adult Glaucous was also present, and a short time later an adult Iceland (Thayer’s-type) was also spotted. 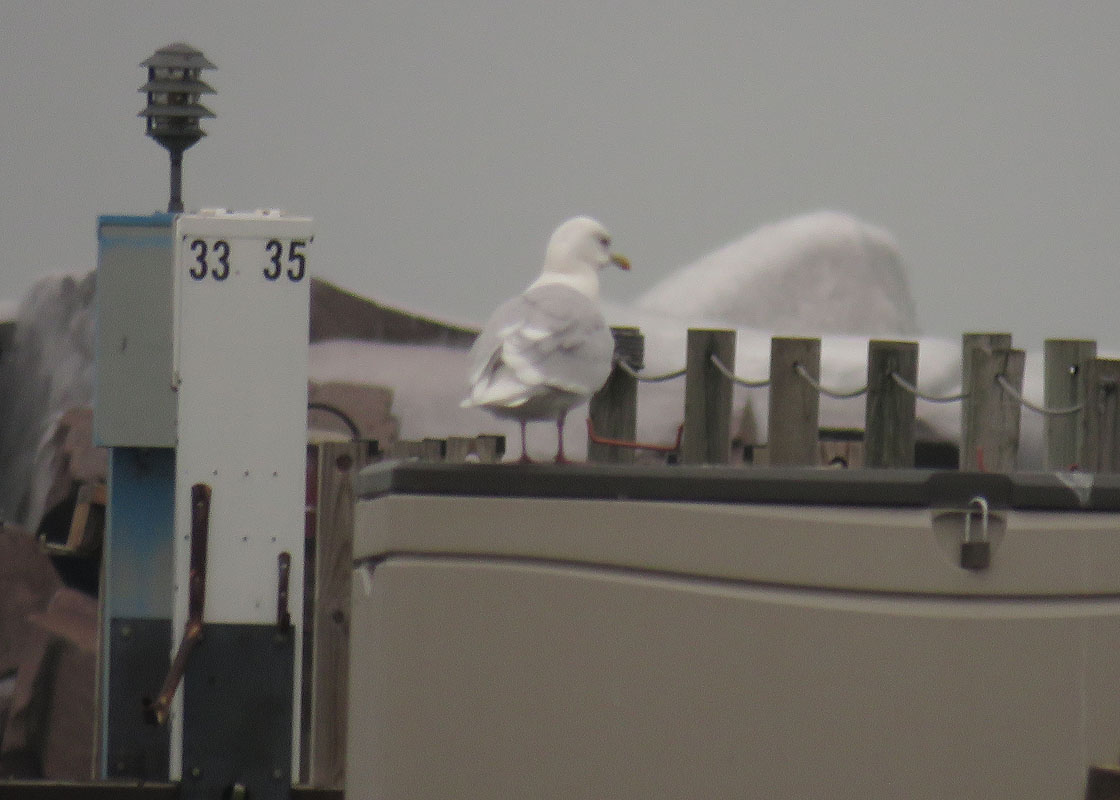 Quite a few Common Goldeneye were present in the marina, and we had good looks at a number of Greater Scaup as they swam nearby on the river. A single Lesser Scaup was picked out among them, and we observed both Common and Red-breasted Mergansers, as well as several Canada Geese. We drove down to the marina for a closer look at the gull flock, but before we got there something had obviously spooked them, for most of them had departed. The group scanned the rocks for a Snowy Owl, but unfortunately were not able to find one.

Our final stop was a North Point, where we found probably the most prized bird of the day – a female Harlequin Duck that was swimming in the rolling surf near one of the concrete piers. A couple of Buffleheads and several goldeneye were also present nearby. We wrapped up about 1:20 PM, happy to have found a number of new and special birds for 2019! 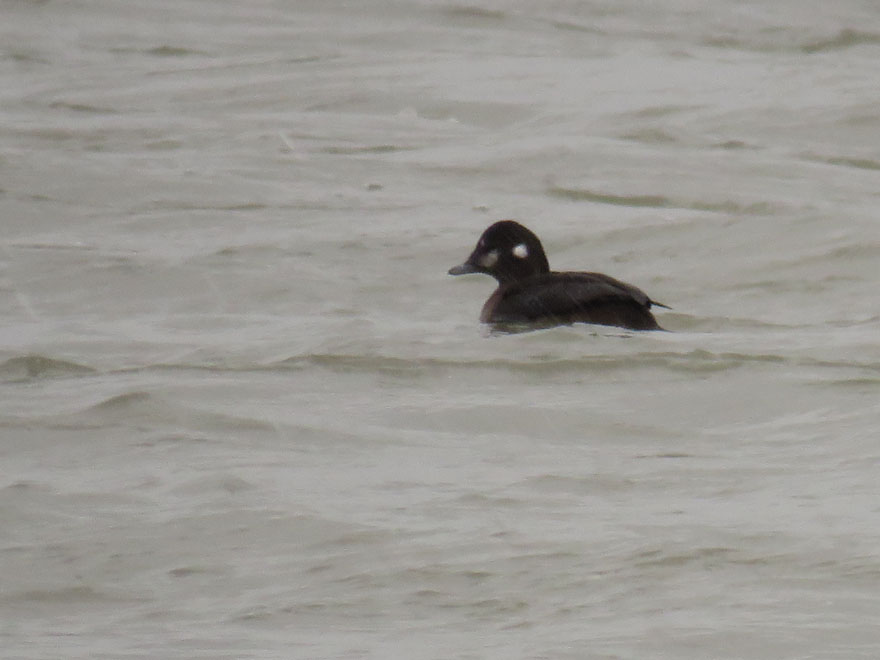 Thanks to Jeff Baughman for co-leading this field trip, and to everyone who participated on this blustery day.