Our group started gathering under cloudy skies in the lower parking lot at Harrington Beach State Park a little before 8:00 AM on Sunday, Oct. 7th. About 22 were in attendance. There was a moderately strong wind blowing out of the northeast, which we knew would create fairly lousy conditions for a hawk flight (west or northwest wind vectors would be much better), and unfortunately our experience through the morning showed us to be correct.

The field trip started off okay, with a flock of Double-crested Cormorants flying over a few minutes before 8:00. While watching them fly over with binoculars a Peregrine Falcon was spotted flying in the same field of view! We called attention to it, and others who were nearby were also able to take a look. Unfortunately it was flying fairly high, so the looks weren’t ideal. An immature Bald Eagle also flew past, making us hope that there could be some raptor movement today... 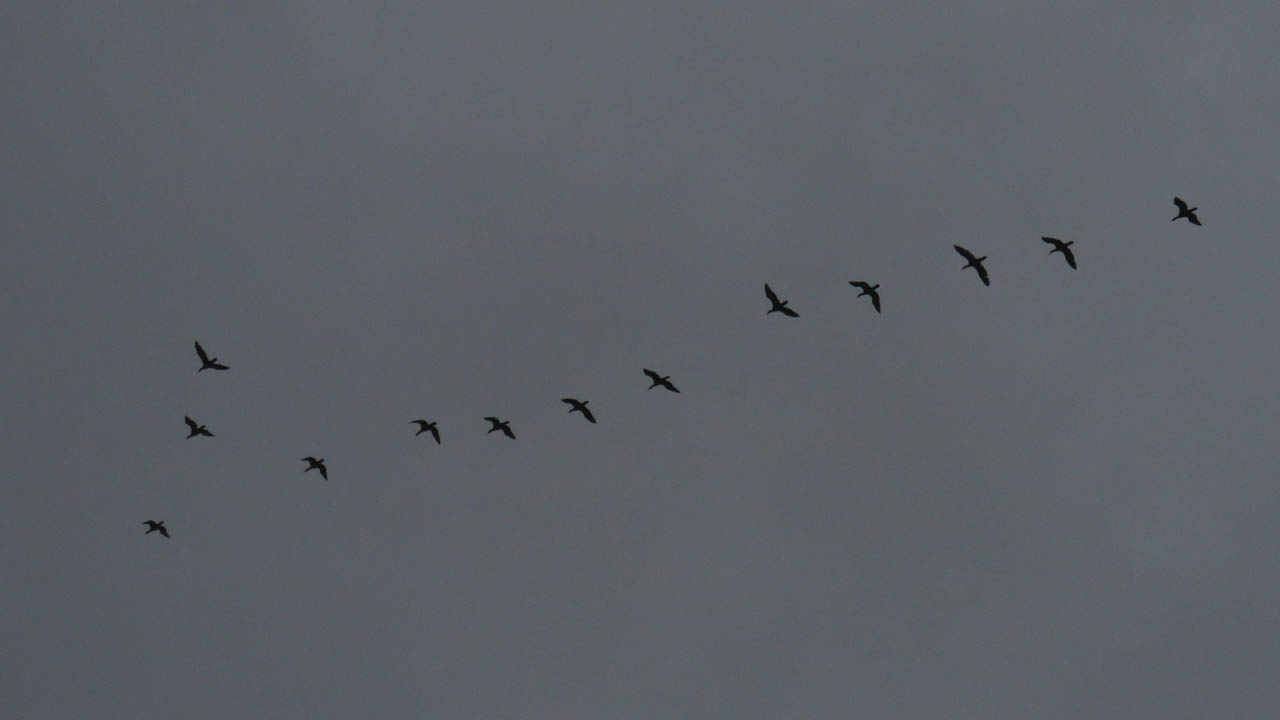 Just a few minutes later, at 8:04 a group of three cormorants flew over, and we noted that the first two of them were substantially smaller than the third individual. The cloudy skies and the distance made for less-than-ideal viewing conditions, but we knew that the relatively small comparative size made us wonder if perhaps the smaller two might have been NEOTROPIC Cormorants, since their size is notably smaller than a Double-crested!

I snapped a couple of photos when they were nearly disappearing behind the trees, and I really wished that I had shot a few pictures when we had first noticed them – when those cormorants were closer to us, and more perpendicular as they passed by overhead.

Around 8:45 someone spotted a Chimney Swift flying over, and as we looked a few more were observed flying nearby – with five seen altogether in that loose group.

The trees around the lower parking lot weren’t all that active, but our group did manage to spot a decent variety. The highlight was probably the Blue-headed Vireo that provided nice looks in the nearby trees, and a few Yellow-bellied Sapsuckers were observed. Both Ruby-crowned and Golden-crowned Kinglets were present, as well as a couple of Brown Creepers and both nuthatches. 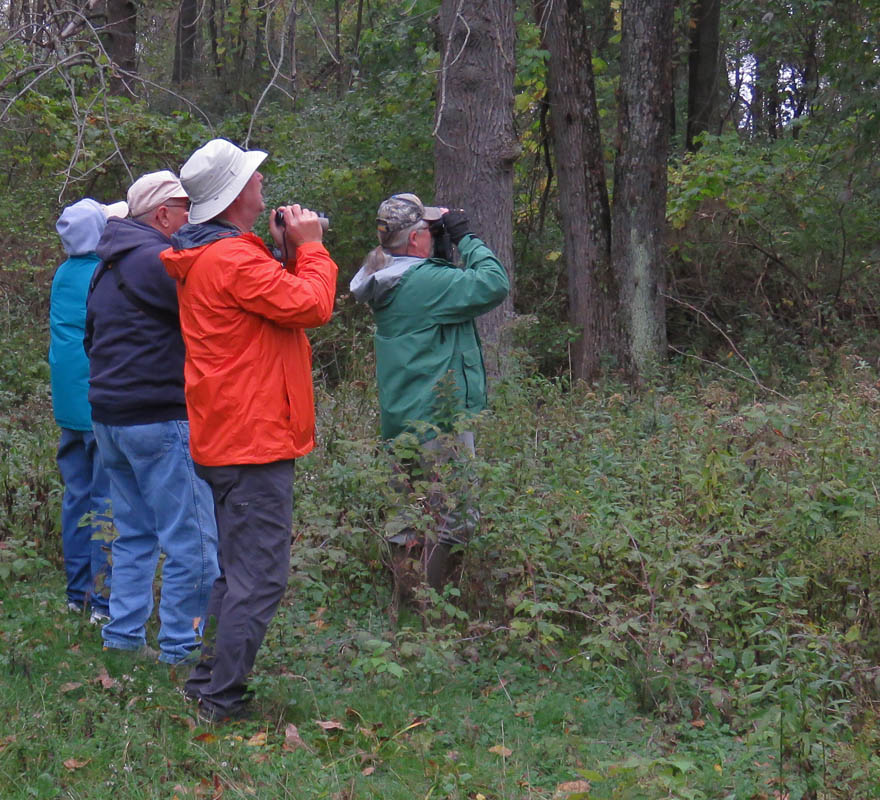 Not many warblers were found this day, with the wind-shaken trees and falling leaves making it more difficult, although several Yellow-rumpeds were heard and spotted. An Orange-crowned Warbler was also briefly observed by at least a couple of us, but it disappeared pretty quickly.

Around 9:00 we worked our way over to the adjacent beach area to check Lake Michigan for birds. The northeast winds were producing large waves, which certainly made finding birds on the water more difficult. A number of Ring-billed and Herring Gulls were moving about, and we observed a few ducks flying in the distance. Some were spotted sitting on the water, fairly far out, but the waves made it very difficult to get good looks as they were bobbing about and hidden but for brief views.

Most of them appeared to be Red-breasted Mergansers, although several Surf Scoters were spotted among them or in flight. There may have been other types of scoters present also, but the wind and rough water conditions prevented us from getting decent looks.

Shortly after 9:30 our group decided to hike the road and trails to the south, toward the quarry area, and we were able to add Cedar Waxwings and a Belted Kingfisher to the list. Several Dark-eyed Juncos were found, and a fairly cooperative Savannah Sparrow was spotted on the roadway. Another sapsucker and both kinglets were also observed along the way. 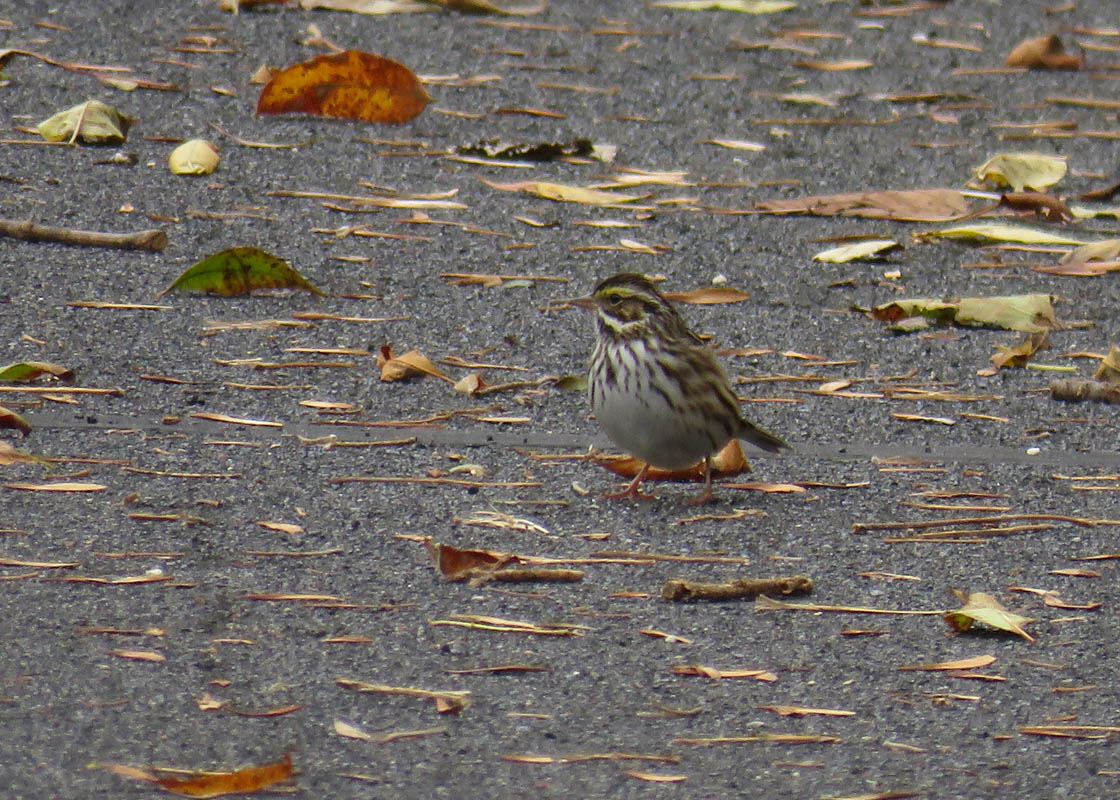 Around 10:00 we returned to the main parking lot and decided to drive up to the Puckett’s Pond area to check for activity, and we hiked around to the back of the pond. A couple of additional sapsuckers were present, along with a few kinglets, sparrows and Yellow-rumped Warblers. A Pine Siskin called as it passed overhead, and a couple of Purple Finches were observed, but again it was fairly quiet.

We hoped the trail would continue to loop around the pond, but instead it continued up through part of the campground, and then we hiked around to the main road and eventually back to the Puckett’s Pond area. Not much bird activity was observed, although we did come across a group of White-crowned Sparrows, as well as Downy Woodpeckers, an American Robin, and a few others.

The time was now approaching 11:00, and there appeared to be little bird activity – and no hawks migration was observed (with the exception of one more Bald Eagle far in the distance) – so we decided not to continue to down to Forest Beach Preserve and called it a day.

As I mentioned earlier, it had turned out to be a poor day for a hawk watch, and rather slow birding overall, but we still managed to get some interesting bird observations. Thanks to Jeff Baughman for co-leading this trip. 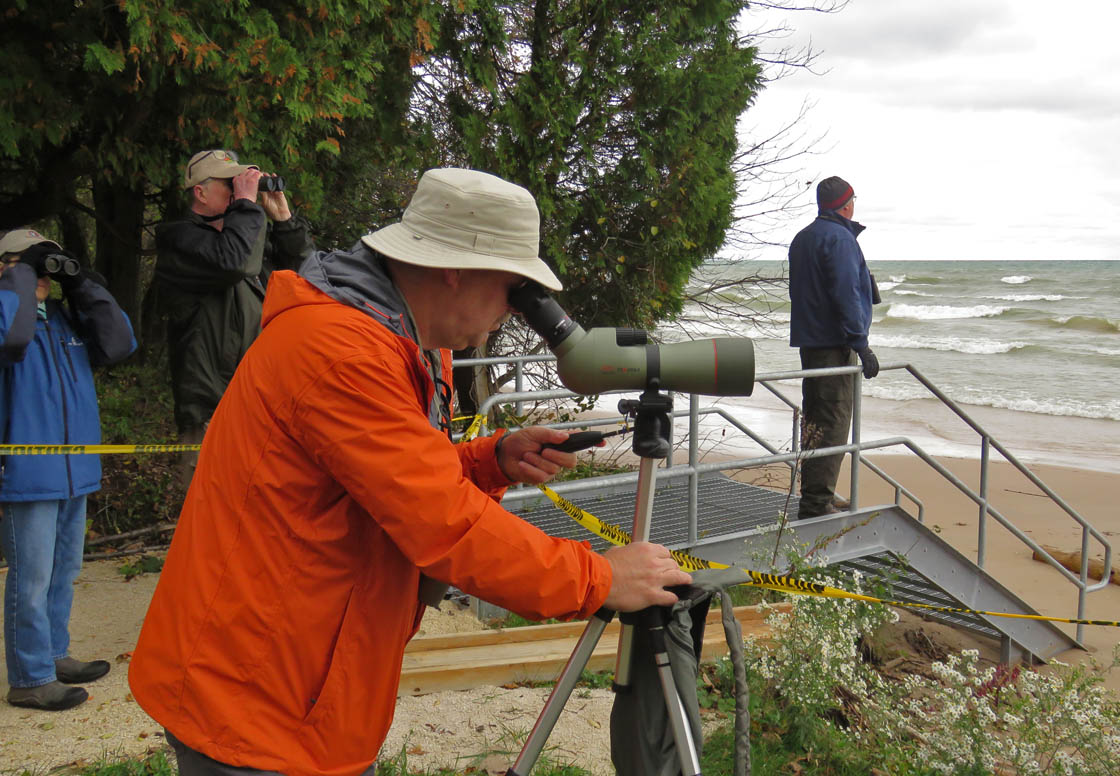