FRIDAY MORNING of Jaegerfest started under cloudy skies, with fairly strong winds blowing out of the north-northwest – creating large waves that were rolling onto the beach at Lot 1. As large as they were, they had obviously been larger during the overnight hours, since there were big logs, sticks, etc. that had been carried high onto the beach – right up to the sandy pathway between the dune grasses!

The first birders started arriving about 6:30 AM, and were greeted by Bald Eagles flying over, along with a few gulls and a lone Sanderling. More gulls continued to gather, and soon a group of nine Common Terns winged their way past, followed by a lone Bonaparte’s Gull.

The first jaeger of the day was spotted around 8:15 – a light-morph adult Parasitic that was characteristically chasing gulls. A short time later the first Double-crested Cormorant was seen, followed by a second Parasitic Jaeger – a pale morph probably in its third year. A Merlin sighting soon followed – a bird that flew right behind our group, then disappeared over the trees to the west. 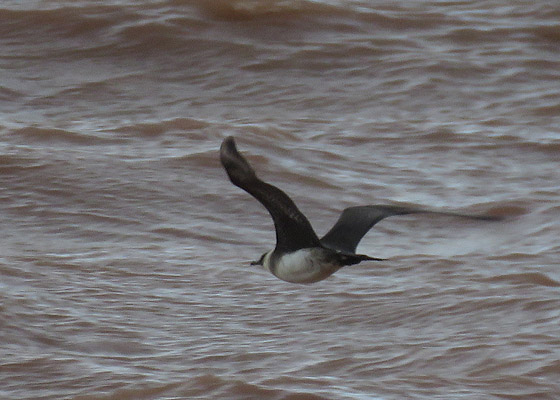 Right around 8:50 the highlight of the weekend was spotted – an adult dark morph POMARINE JAEGER! It came flying in from the northeast (the main part of the lake), and flew past us, heading west. It was some distance away, but we had decent views of its bulkier size and direct, steady flight – not dipping or swooping like the Parasitics we’d been seeing. But the most diagnostic part was the tail. Being a full adult, it had long, broad streamers extending from its central tail feathers – and they were twisted in flight (and often called “spoons”), resulting in a thickened appearance to the rear part of the tail! 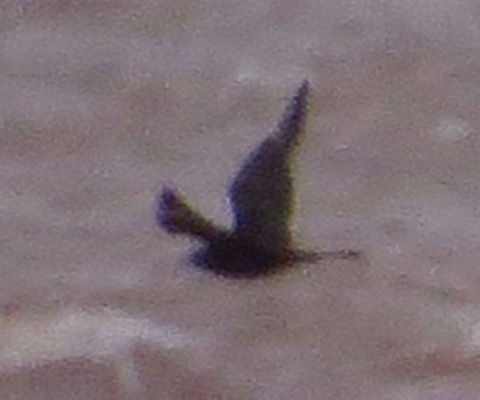 Birders who were present on the beach were yelling and “high-fiving” at having been able to see this rarity. It turned out that the bird was even rarer than we thought, since dark morph adult Pomarines comprise less than 10% of adults (most Pomarines are pale morphs).

Following that, we had more Sanderlings fly past our group, as well as some Forster’s Terns, and then around 9:30 an American Golden-Plover provided nice looks as it whizzed by – eventually flying over the trees to the east of us.

We had a number of additional opportunities to view Parasitic Jaegers – including pale, intermediate, and dark morphs (all adults or near-adults) – and two of them flew right over us and headed over to Allouez Bay. Then, right around 10:00 a Ruddy Turnstone flew in and landed on the beach right in front of us! Numerous photos were taken of this cooperative bird. Other species that were spotted later that morning were a Semipalmated Plover, a Belted Kingfisher, and some Redheads. 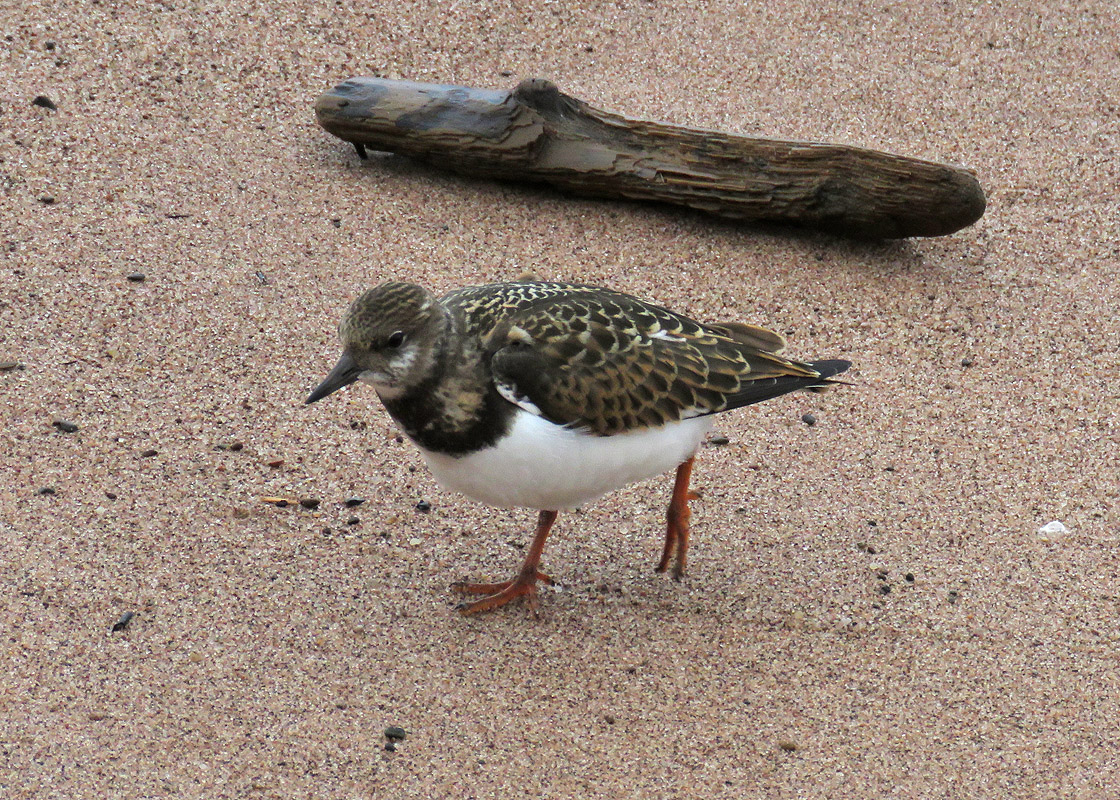 A Ruddy Turnstone flew in and landed right in front of everyone! Photograph taken by Tom Schultz.

In the afternoon many birders checked various spots along the road further down the point, looking for passerines, and a nice variety  was found – including Cape May, Blackpoll, Tennessee, Black-and-white, Palm, and Yellow-rumped Warblers, as well as American Redstart, Veery, Swainson’s and Hermit Thrushes, Least Flycatcher, Yellow-bellied Sapsucker, both kinglets, and others.

SATURDAY MORNING brought much calmer waters on Lake Superior, with the wind blowing from the southwest – meaning that the beach area was quite protected. The air was chilly, around 40 degrees, but fortunately there was little wind chill. The sunrise was gorgeous with patches of clouds picking up bright rosy hues. 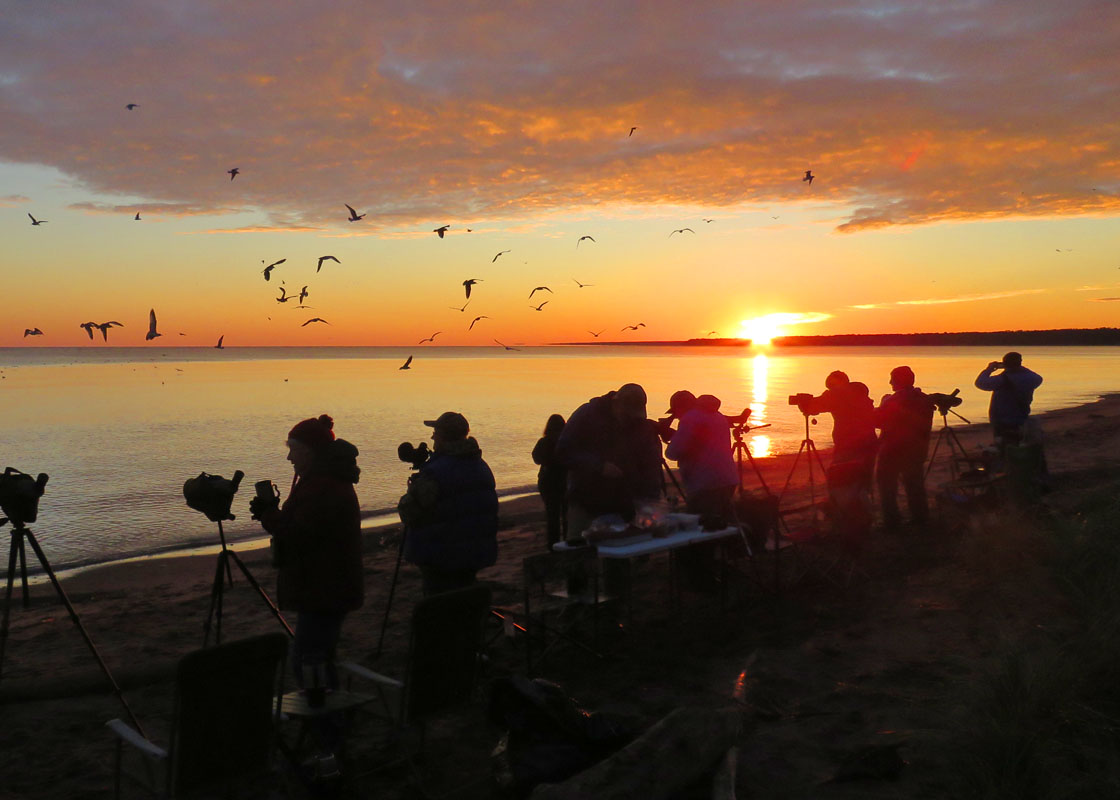 Among the first birds spotted on Wisconsin Point this morning were Bald Eagles, Canada Geese, and Wood Ducks, as gulls started to gather.  A Pied-billed Grebe was swimming in the calm waters to the west of us, a large flock of Green-winged Teal (about 40) flew past, and a short time later a small group of Blue-winged Teal also passed our group.

Around 7:15 a group of seven Common Terns flew past, soon followed by an American Black Duck with a few Mallards. Three Bonaparte’s Gulls flew in, sat for a little while with the Ring-billed Gulls, and then took off again. Shortly after 7:30, a nice group of Redheads passed over our group, and then a short time later a Greater Scaup was spotted swimming alongside a few Lessers.

At 9:00 the first jaeger of the day was spotted – a pale sub-adult Parasitic that was flying east, chasing gulls until it disappeared from view. Then about 10 minutes later an immature (2nd year) Franklin’s Gull was observed swimming just offshore with the flock of Ring-billed Gulls, and then an adult was also spotted a little further out. 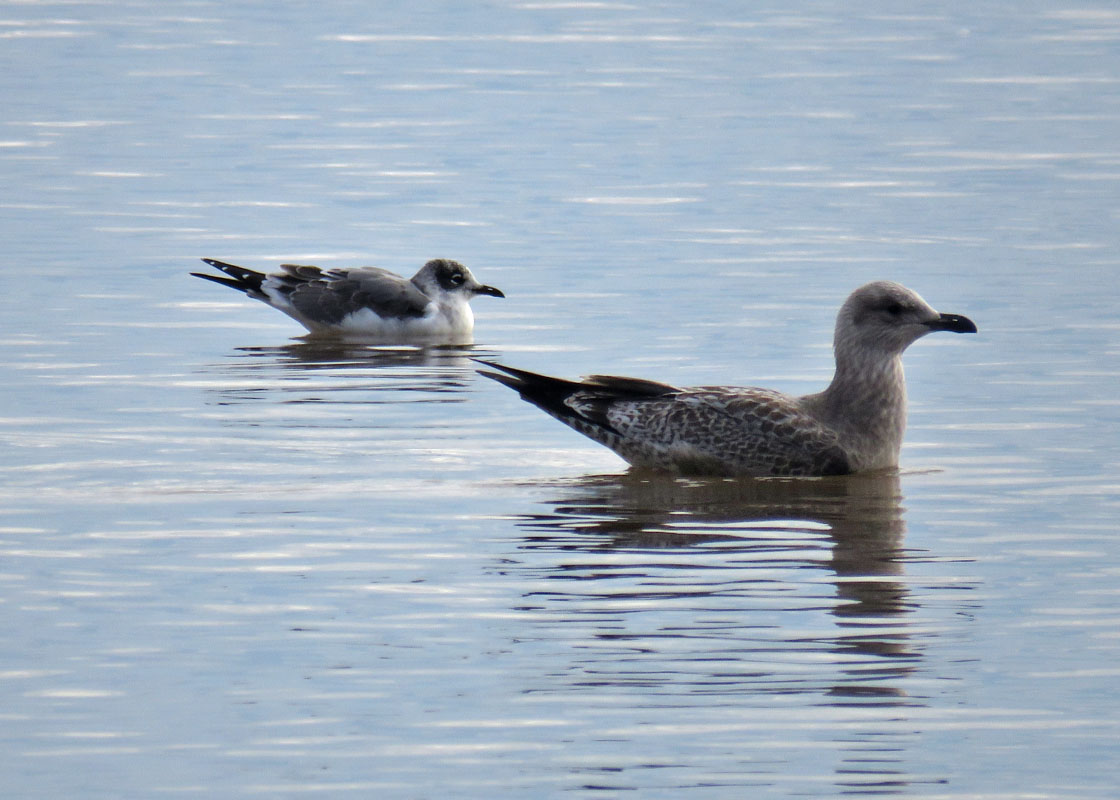 More Parasitic Jaegers were observed from time to time through the morning, and at one point a Peregrine Falcon chased one of them for a short time! A Great Black-backed Gull was found swimming out on the lake among Herring Gulls, and a little while later a couple of female Surf Scoters were spotted, followed by a group of four American Wigeon. At 11:08 there were three Parasitic Jaegers observed flying together out near the horizon.

Our group, which had reached a peak of about 65-70 attendees around mid-morning, was entertained at one point by a Bald Eagle that was repeatedly dive-bombed by a couple of Parasitic Jaegers. About 12:20 a pair of Surf Scoters (male and female) was spotted swimming well offshore, but they provided scope views. In the afternoon, a Lesser Black-backed Gull flew in and landed, although that bird too was quite a ways out. 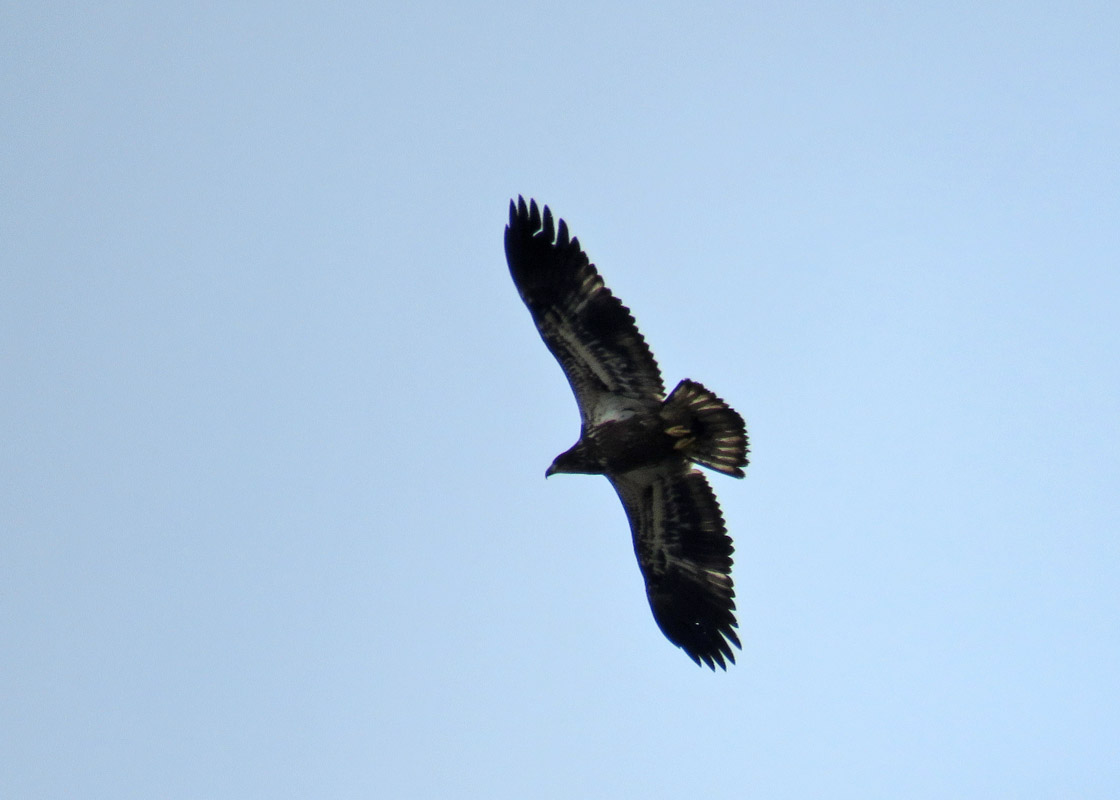 A variety of passerines were once again observed further down along the Point, although fewer than the day before. Sparrows included White-throated, White-crowned, Dark-eyed Junco, Chipping, Clay-colored, and Song.

On SUNDAY the strong wind was back, this time blowing from the east – so it was building large waves on the big lake that came crashing ashore. Some of the waves would flow nearly up to the dune grasses, getting our tripods and feet wet on occasion. The sky was cloudy, but at least no rain was falling, and the temperature was about 55 degrees. 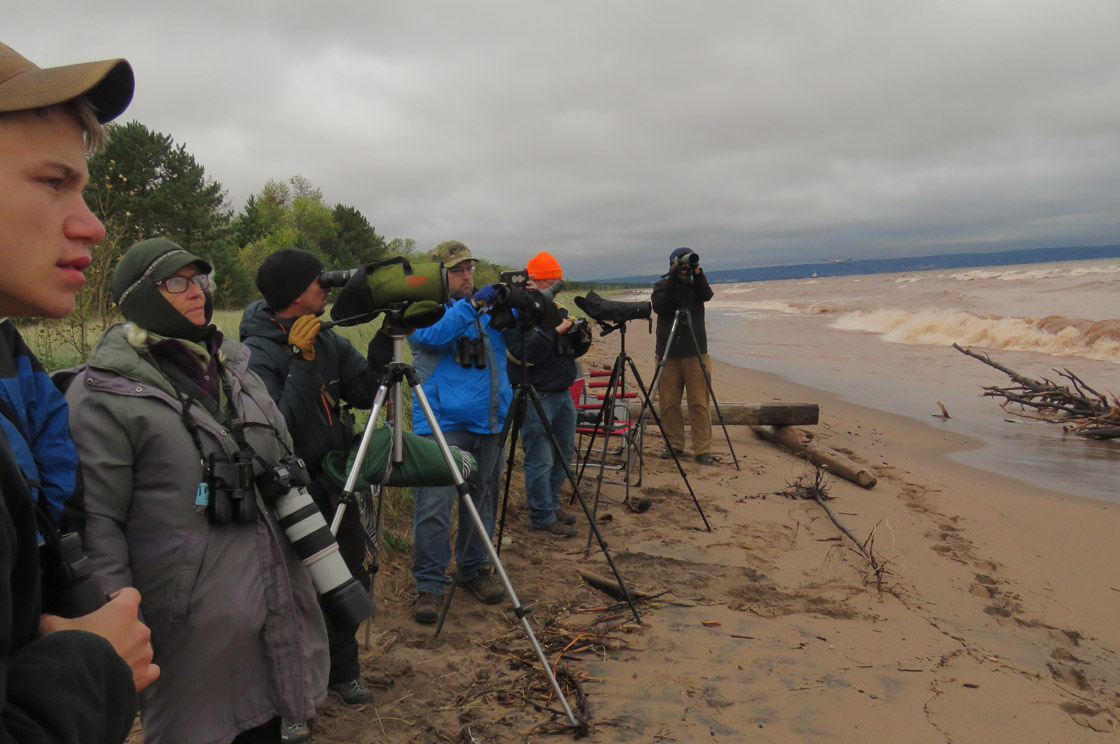 As usual, the first birds to appear with the dawn were Bald Eagles and gulls, flying about overhead and over the lake. Some gulls were landing on the water, where they would promptly disappear – hidden between the big, rolling waves. A Bonaparte’s Gull was eventually spotted, flying just offshore, and a Black-bellied Plover flew past, showing its dark “armpits” as it winged its way over the water – first to the left, and then back to the right. Several scaup passed by us around 7:30, heading east into the wind, and a little while later two Sanderlings flew past. Three Bonaparte’s Gulls came in and were flying amongst the Ring-billeds just offshore for a little while. 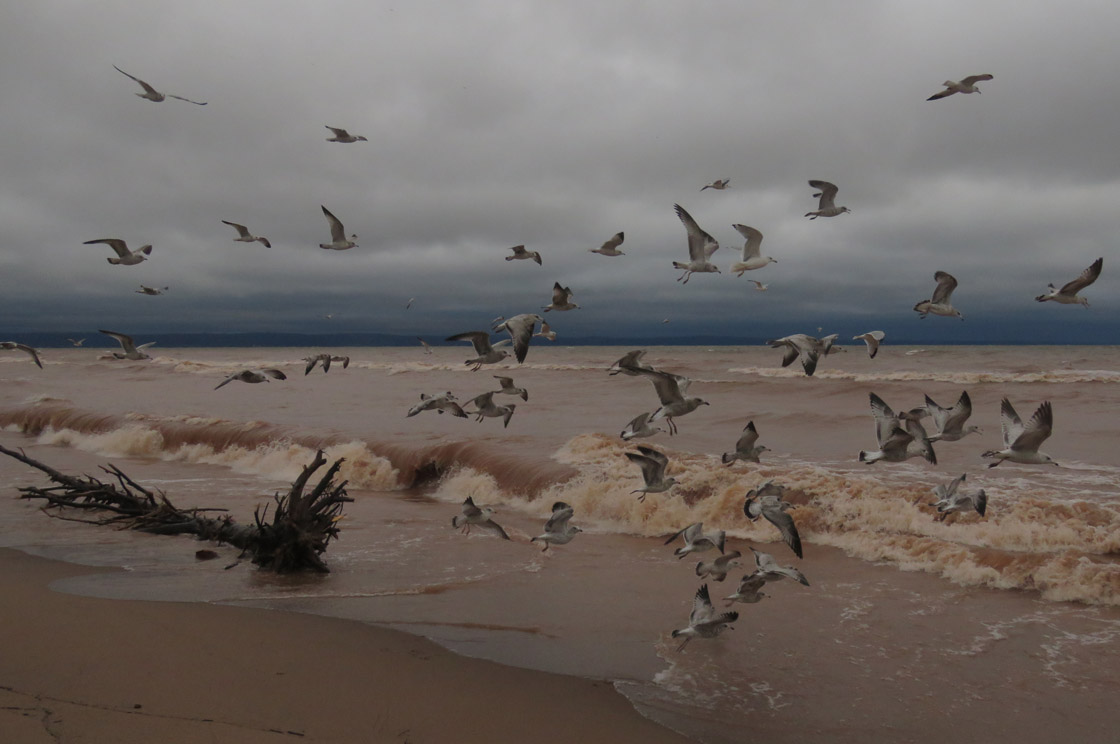 At one point a Peregrine Falcon was spotted as it flew over us fairly high, moving south – apparently migrating. Then a flock of Northern Pintails flew by, with a couple of American Wigeon in the lead. Finally, about 8:24 we sighted our first Parasitic Jaegers of the day, flying about and chasing gulls – followed soon by a couple of Green-winged Teal that were passing by, and a Common Raven flying overhead just behind us.

A group of birders on a Hawk Ridge field trip joined us on the beach, roughly doubling our numbers – which was now up to about 33. We all watched as a couple more jaegers were flying about. We were surprised to see so many adult (or near-adult) jaegers this year, since most years we see mostly juveniles! We wondered if the lack of young birds may have been due to a poor reproductive year in the Arctic this summer??

Thanks to Jeff Baughman for co-leading this field trip, and to the 90 or so birders who attended in 2018. We had observed a lot of great birds, once again, but all the great social interactions certainly added to the enjoyment of attendees! 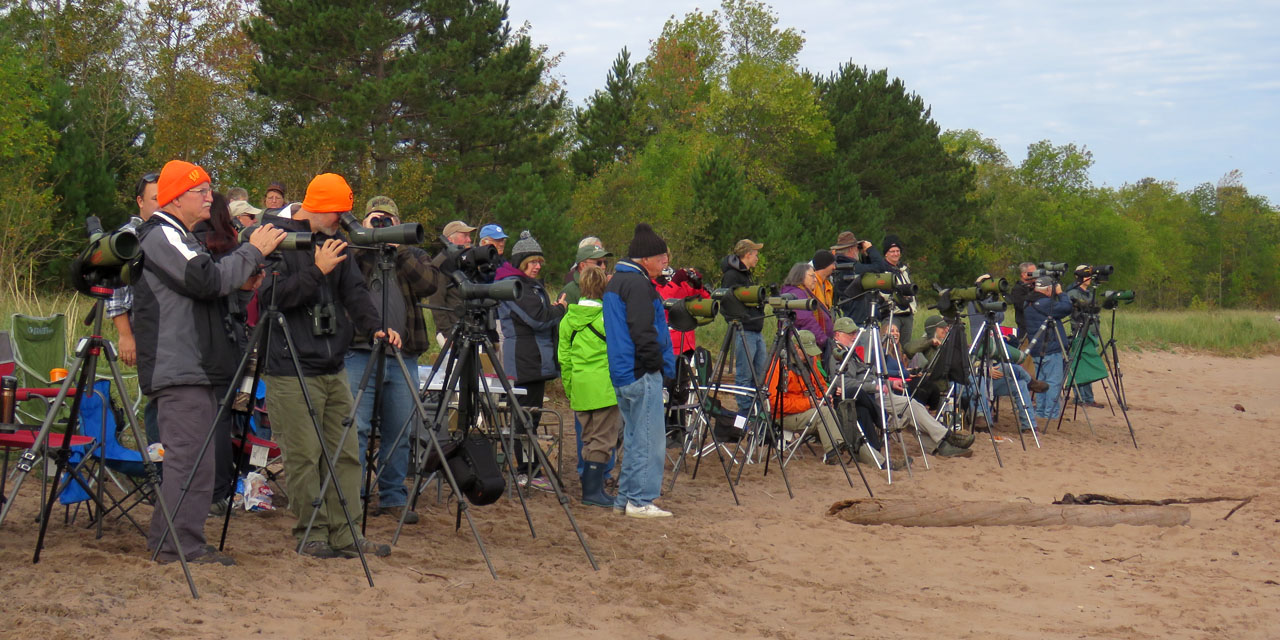 Group photo of participants in the 2018 Jaegerfest! Photograph taken by Tom Schultz.