The morning was about as perfect as it could be as our group gathered at 5:00 AM -- 48 degrees, with calm winds and clear skies.   Birds were singing all around us, with Swamp Sparrows, American Bitterns, and Sora and Virginia Rails calling from the marsh.  A pair of Great Horned Owls called in the distance, and from time to time bugled their unison calls from all directions. 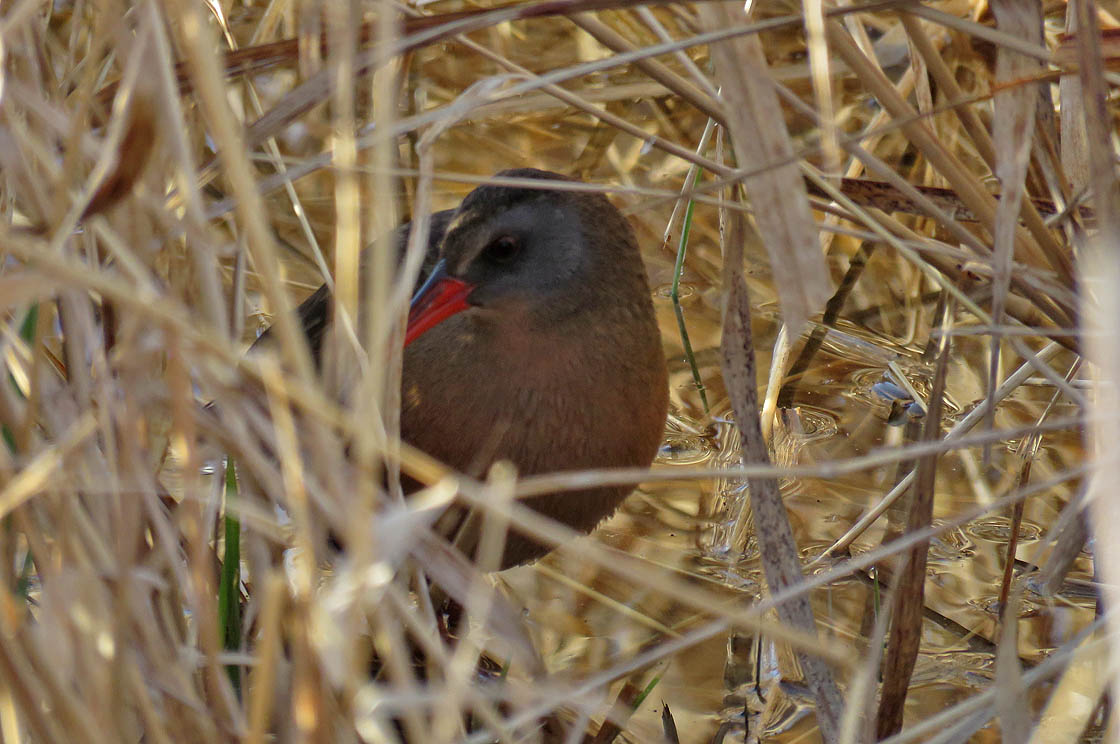 We slowly hiked along the gravel White River Road, listening and watching all around us.  Several Marsh Wren sang their jerky chirping songs, and a little further along we began to hear Sedge Wrens.  Yellow Warblers and Common Yellowthroats delivered their distinctive songs from the willow bushes, along with a number of Red-winged Blackbirds.  A few Blue-winged Teal flew past, along with Mallards and Wood Ducks, and several Song Sparrows and a White-crowned were seen hopping along the road.

At one point someone in the group spotted a Whooping Crane flying across the marsh, and we watched this magnificent white bird until it dropped down among the cattails.  Upon landing, it immediately started unison-calling with its mate!  This is the same pair that nested in the marsh last year, and we were very pleased to see and hear them.

During our hike we spotted an ultralight aircraft that was flying in our general direction.  It turned out that it was part of the Operation Migration team, flying over the marsh in an attempt to spot a possible nest location for that Whooping Crane pair.  That sure added a fun dimension to our field trip! 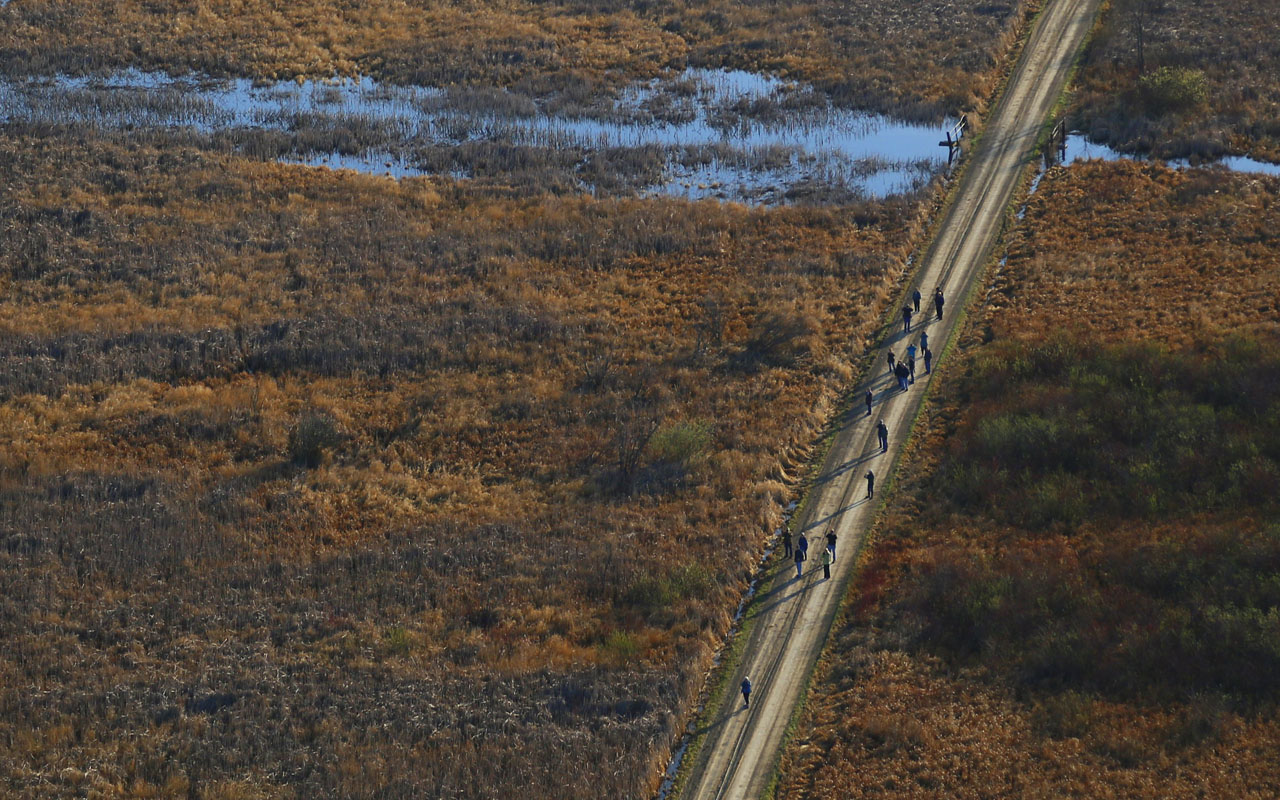 As our group approached a small oak island we began to hear a Yellow-throated Vireo, but unfortunately it only sang a few times, and we were unable to spot it.  Other birds present included Yellow-rumped and Palm Warblers, Eastern Towhee, Gray Catbird, Rose-breasted Grosbeak, and Blue-gray Gnatcatcher. A Northern Harrier also flew past.

On the way back to the cars we spotted a male Hooded Merganser, and we heard a Wilson’s Snipe winnowing overhead.  We drove east, pausing to check a grassy meadow that was just down the road.  A Henslow’s Sparrow was heard singing, and we were able to view it through a spotting scope.  Several Bobolinks were also present, singing their bubbly songs.

Along Big Island Road we spotted another Whooping Crane, this time at a much closer distance.  From the combination of colored bands this bird was determined to be #30-16.  Just down the road we had Eastern Meadowlarks and more Bobolinks, along with Blue-winged Teal out in the field.  A couple of Bald Eagles were present in the distance – walking around on the ground like turkeys!

After a relatively fruitless check down Hopp Road we headed out to Hwy. D, where we stopped at a parking area near the White River.  Another Yellow-throated Vireo was heard (but this time also seen), along with a Gray Catbird.  A number of warblers were present, including Yellow-rumped, Palm, Black-and-white, and Northern Waterthrush – as well as a couple of Ruby-crowned Kinglets.  We noticed a pair of Black-capped Chickadees visiting the end of a fallen tree trunk repeatedly – each time carrying out a mouthful of wood chips as they were apparently excavating a nest cavity.

Continuing on, we stopped at a DNR prairie restoration where we heard and then eventually saw a Grasshopper Sparrow.  Nearby was a nest box for American Kestrels, and we watched a male fly into a big dead tree carrying a snake.  After a couple of minutes it flew down to another branch, next to his mate, and he passed the snake over to her and then took off.  It was very cool to observed this courtship activity! 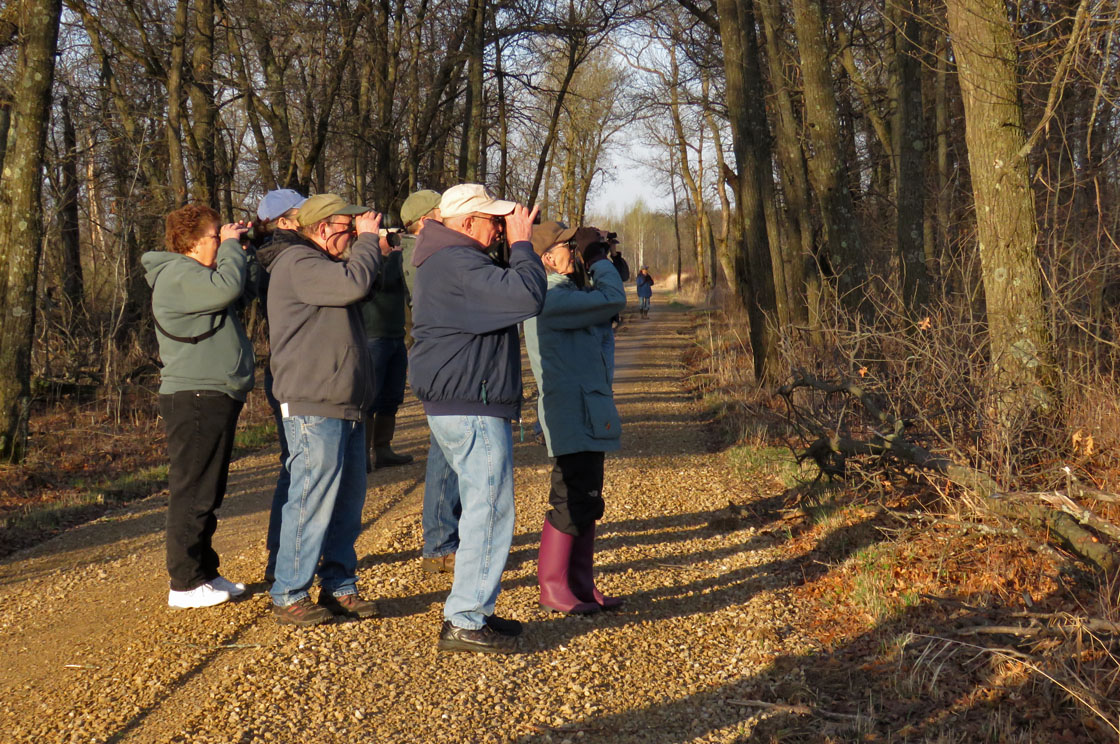 Our next stop took us down a narrow gravel road through some tall pines, where typically Pine Warblers typically nest.  We were able to get good looks at a male in the trees overhead, and also saw a couple of Black-throated Green Warblers.  An Ovenbird sang from the nearby forest.

Following a bathroom break at the Princeton BP station we continued south to the village of Marquette on the shores of Lake Puckaway.  We were able to observe a number of American White Pelicans from the boat launch, along with Double-crested Cormorants (including many at a large nest colony at the east end of the lake), Great Blue Herons, Great Egrets, Forster’s Terns, Bonaparte’s Gulls and Northern Harriers.   After passing through Kingston we stopped near some Amish farms to see Purple Martins flying around in the vicinity of colonial nest boxes.

We continued on to Lake Maria, where we scanned the waters from the boat launch.  A nice variety of ducks was seen, including Ring-necked, Bufflehead, Common Goldeneye, Common Merganser, and Ruddy.  A breeding-plumaged Horned Grebe was also spotted, along with a few more pelicans.  A nearby pond on Lake Maria Road added American Wigeon, Green-winged Teal, Gadwall and Canvasback.  Also present were Northern Rough-winged Swallow and Spotted Sandpiper – along with Greater and Lesser Yellowlegs.

Our final stop was at a flooded field just to the south on Hwy. AW, where we found about three dozen Bonaparte’s Gulls.  Along the western edge were a couple of Solitary Sandpipers, along with both yellowlegs species.  We wrapped up the field trip around 1:15 PM after a really great day – which had produced a total of 106 species!