The 7:00 AM temperature on Saturday, March 24 was only slightly below normal, in the upper 20s, but the very strong east wind really brought the “feels like” temperature down – into the single digits!  The tough wind chill likely kept the attendance down this year, since we only had around 20 hardy birders show up for this outing.

The field trip attendees gathered at Goose Pond Sanctuary, but unlike most years, there weren’t all that many waterfowl on the pond itself (which had just thawed in the last couple of days) – with mainly Canada Geese and Tundra Swans present in relatively small numbers, along with a few Redheads and Lesser Scaup. We could see that there were many more geese standing amongst the wetland vegetation that was just off the north edge of the pond. The group drove around for a better view, and among the large number of Canada Geese present there were also quite a few Greater White-fronted and Cackling Geese, and a single white Snow Goose there also. In addition there were a number of ducks also mixed in, including Mallard, Gadwall, Northern Pintail, American Wigeon and Green-winged Teal. Other birds seen or heard in the Goose Pond vicinity were Sandhill Crane, Ring-necked Pheasant, Song Sparrow, and a lone Wilson’s Snipe.

From there the group headed east to Harvey Road, where we stopped to check out the large pond north of Hwy. 60.  The featured bird there was Northern Pintail, with many present, along with a variety of other ducks and Canada Geese.  We drove a short distance north to the Schoeneberg Marsh, where we parked and walked down the former road to a spot closer to the water.  Many more ducks, geese and a few Tundra Swans were present here also, including several  Greater White-fronted Geese that came flying in. The ducks included Bufflehead, Hooded and Common Mergansers, Ring-necked, Lesser Scaup, Northern Shoveler, Green-winged Teal, a single Blue-winged Teal, and a Wood Duck. 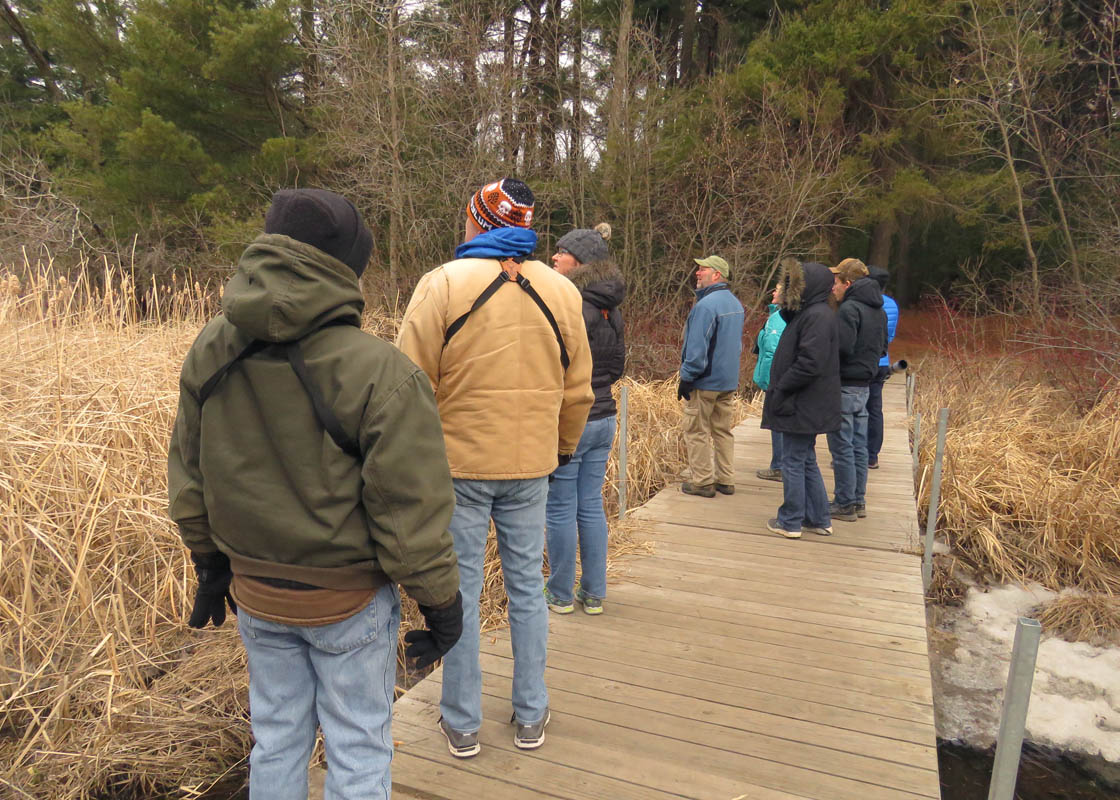 After returning to our cars we drove south a few miles to some flooded fields along Harvey and Wangsness Roads.  More Canada Geese were here, and quite a few more ducks – with about 10 Wood Ducks, and other birds like Ring-billed Gulls, Killdeer and Horned Lark and Common Grackle.

Heading west from there we spotted a Northern Harrier on the way to the ponds near Highways DM & I, where Northern Shovelers, Ring-necks and about 35 Redheads were present – along with a couple of Great Blue Herons, and a few Killdeer.  A little ways further west we stopped to check out the WIBU Road Pond, where we saw another snipe and added a Pied-billed Grebe.

Our group headed south to the ponds along Hwy. V, where a nice selection of waterfowl was present – including more Tundra Swans, and a lone Trumpeter Swan.   More shovelers, wigeon and Green-winged Teal were present, a few Canvasbacks and other divers, and also a few American Coots. 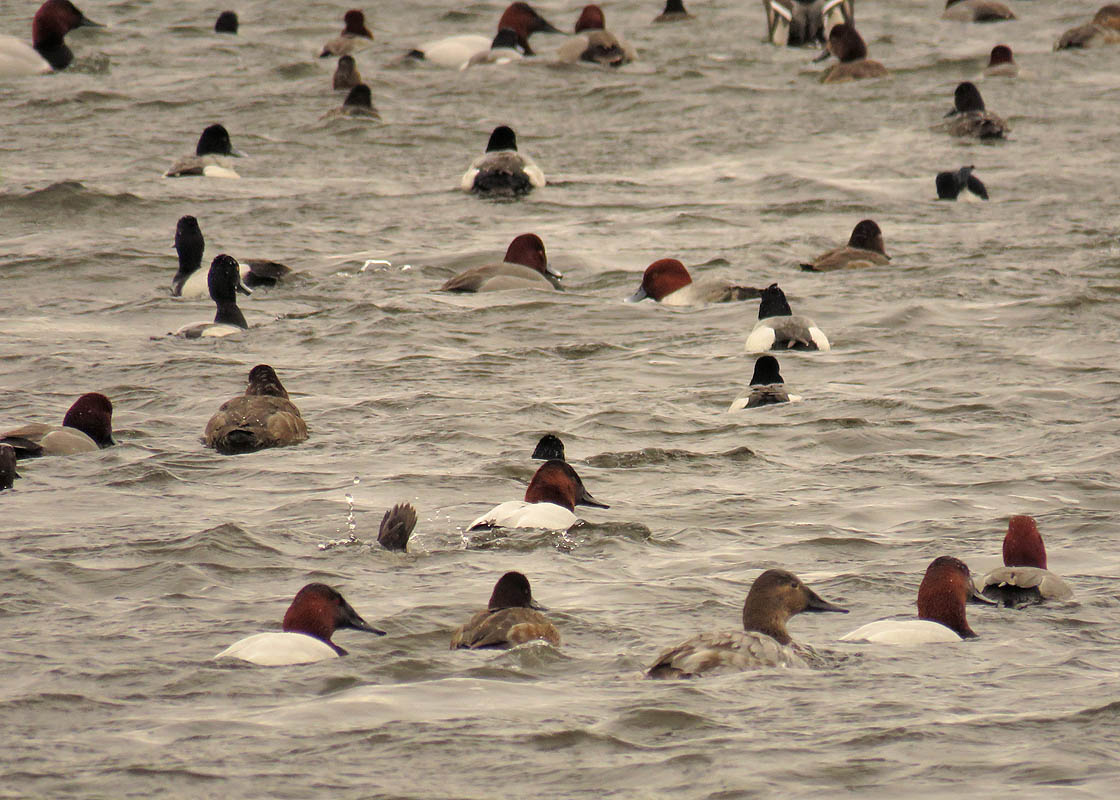 Following a restroom stop we got on the interstate and headed north to the Lake Wisconsin causeway along Highway V.  There were lots of ducks present here, with the water on the east side entirely open, and a large area of open water to the west.  Here we had a few Common Goldeneye and Bufflehead, but good numbers of Redheads, Canvasbacks, Ring-necked Ducks, and Lesser Scaup – and were pleased to spot at least half a dozen Greater Scaup mixed in. There was also a nice selection of puddle ducks present, along with a few Tundra Swans and a lone Mute Swan was spotted, and we were somewhat surprised to see a group of Tree Swallows flying about near the marsh.  About 200 Ring-billed Gulls were scattered around on the west side, with a few Herring Gulls were also present – and way off in the distance there were six Bald Eagles also sitting on the ice.  The group also spotted a Turkey Vulture soaring about, and a group of four American White Pelicans flew past.

Our final stop was at Rowan Creek Park, along Hwy. CS near Poynette.   Our target bird there is usually Tufted Titmouse, and we heard one singing almost immediately.  A number of other songbirds were also present, including Black-capped Chickadees, both nuthatches, Northern Cardinal, American Robin, and a few Pine Siskins – but the highlight was a Hermit Thrush!  Sandhill Cranes called from the marsh, pairs of Canada Geese and Mallards were present, and a Red-tailed Hawk soared overhead.  We concluded the field trip right around noon.

Thanks to everyone who attended on this blustery, chilly day, and to Jeff Baughman for co-leading the outing.