Our group of 14 recently returned from our 2018 WSO Costa Rica Tour (Feb. 25 to March 10), after another fabulous tropical adventure! Eleven of us flew together from Milwaukee, via Houston, and met three other participants flying in from elsewhere.

After driving south from the airport, our tour started out near the Pacific Coast, at a lodge not far from Carara National Park. We spent most of our first full day birding at the park, and were able to see a nice introductory group of tropical species, including White-whiskered Puffbird, Streak-chested Antpitta, Steely-vented Hummingbird, Marbled Wood-Quail, and several trogons, antbirds, woodcreepers and others. One of the special opportunities was being able to observe the afternoon stream-bathing activities of several birds, including Red-capped Manakin and Sulphur-rumped Flycatcher. 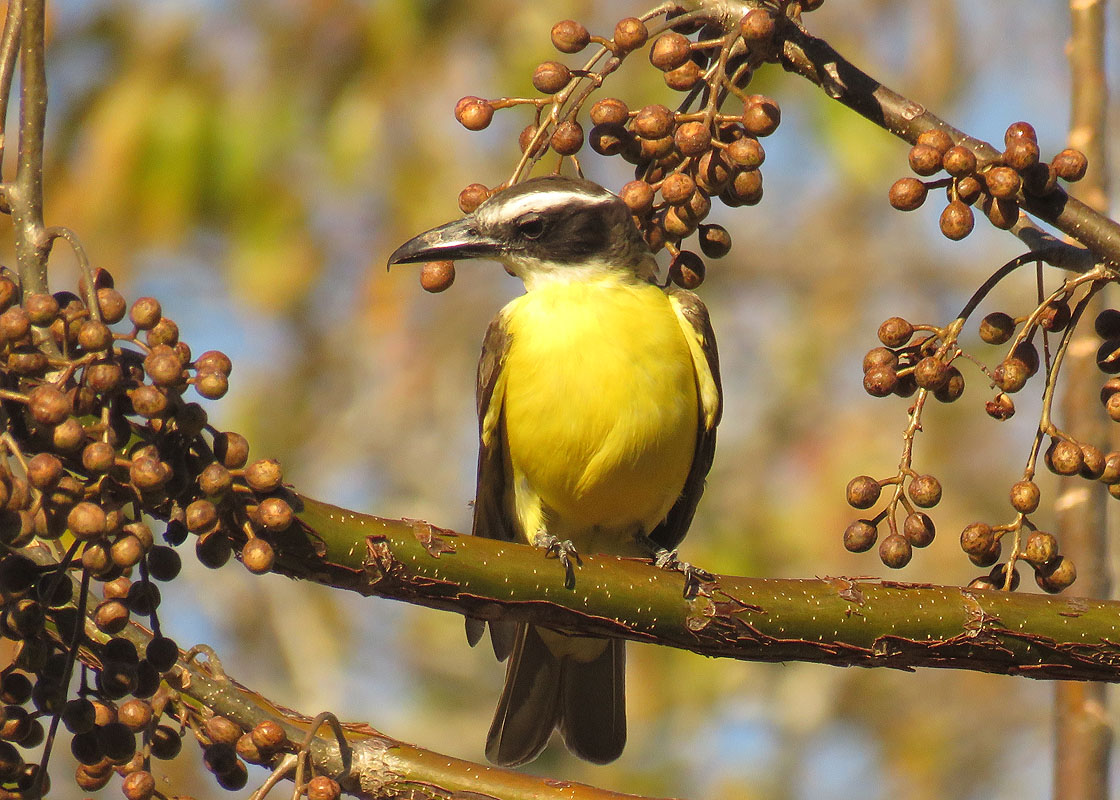 The following day we drove a short distance north to find some inhabitants of the drier northwestern portion of Costa Rica – in the area near Guacimo. Some of the birds included Double-striped Thick-knee, Lesser Ground-Cuckoo, Ferruginous Pygmy-Owl, Turquoise-browed Motmot, White-necked Puffbird, Nutting’s Flycatcher, Long-tailed Manakin, and White-lored Gnatcatcher. Other highlights were Yellow-billed Cotinga and White-throated Magpie-Jay.

In the late afternoon the group took a relaxing boat tour on the Tarcoles River, where many types of heron were spotted, as well as Neotropic Cormorant and Anhinga. A nice variety of shorebirds were also observed, including Whimbrel, Semipalmated Plover and Ruddy Turnstone, and raptors that included Double-toothed and Plumbeous Kites, Common Black Hawk, and Zone-tailed Hawk. We had a nice variety of parrots, several Scarlet Macaws, as well as some large Central American Crocodiles.

Our boat trip took us to the mouth of the river, quite near the Pacific Ocean, with many Magnificent Frigatebirds and Brown Pelicans flying about. A side channel took us into a mangrove swamp, where we saw several specialties of this habitat including Mangrove Hummingbird, Mangrove Cuckoo, “Mangrove” Yellow Warbler, and also the very special Rufous-necked Wood-Rail!

Early the following morning (Feb. 28) we drove a short distance up the road from our lodge and found a nice variety of new birds before breakfast! Among these were Golden-naped Woodpecker, Collared Forest-Falcon, Black-bellied, Rufous-and-white, Cabanis’s and Rufous-breasted Wrens, and a pair of Red-crowned Ant-Tanagers. 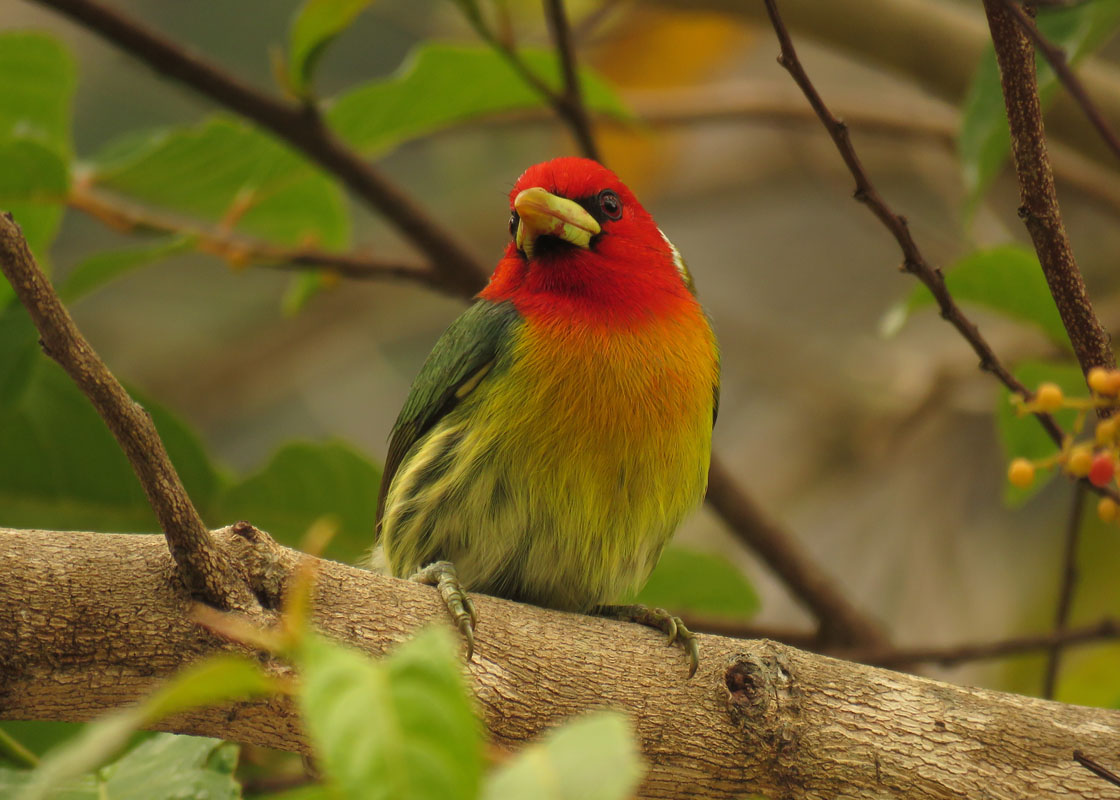 After breakfast we loaded up and headed south along the Pacific to Dominical, where we made a brief stop to check out the beach. Then we headed inland and began our ascent into the mountains via San Isidro. We stopped at Talari Lodge for lunch, visited Tolomuco Lodge to enjoy their feeders and were able to see a nice variety of tanagers and hummingbirds – including White-crested Coquette and Snowy-bellied.

We continued through the mountains and arrived at Savegre Valley in the evening, in time to hear and see Dusky Nightjars before heading to Savegre Mountain Lodge. The following morning was spectacular, with many new bird species including Spotted Wood-Quail, Black-billed Nightingale-Thrush, Mountain Elaenia, Black-cheeked Warbler, and the truly spectacular Respledent Quetzal! Birds right outside the lodge included Sulphur-winged Parakeet, Ruddy Treerunner, Spot-crowned Woodcreeper, Long-tailed Silky-Flycatcher, Flame-colored Tanager, and lots of beautiful hummingbirds! One of the highlights of this area was finding a pair of stunning Golden-browed Chlorophonias.

Our group spent a couple of hours in the high mountain treeless zone (called paramo) on Cerro de la Muerte, where we found Timberline Wren, Volcano Junco and others, and had a chance to see distant ash plumes rising from the active Turrialba Volcano. Following a spectacular stop in the majestic cloud forest along Providencia Road we had lunch at Paraiso Quetzal, where the feeders were buzzing with Fiery-throated Hummingbirds and other species.

Our afternoon took us through San Jose and up across the mountains of Braulio Carillo National Park, and on to a location just outside of La Selva OTS, where we eventually spotted a pair of Great Green Macaws – along with several other birds. Then we proceeded to La Quinta Lodge for the night. The next day was spent at La Selva OTS, which contains a marvelous preserve of mature tropical rainforest. There we saw a wonderful selection of birds, mammals and other critters, including Sunbittern, Purple-crowned Fairy, Rufous-winged and Chestnut Woodpeckers, Snowy Cotinga and many others. We also saw Eyelash Viper, Armored Centipede, Helicopter Damselfly, Mantled Howler Monkey and Collared Peccary.

Sunday, March 4th took us to several locations near Guapiles, including Cope’s feeders and other stops. At the former we saw lots of great feeder activity, including Collared Aracari, Russet-naped Wood-Rail, Chestnut-headed Oropendola , and a pair of White Hawks that soared overhead – as well as a close look at Brown-throated (Three-toed) Sloth. A nearby forest produced a roosting Spectacled Owl, Black-headed Tody-Flycatcher and Slate-colored Grosbeak.

We hiked along a two-track road along Rio Corinto and found an immature Rufescent Tiger-Heron, Black-capped Pygmy-Tyrant, Plain Xenops and Scarlet Cacique. Then following a lunch stop we visited the Old Butterfly Garden where we found some very nice highlight birds, including Black-crested Coquette, Snowcap (both hummingbirds), and also the very rare Lattice-tailed Trogon and Bare-necked Umbrellabird!

The following day took us to the Virgen del Socorro valley, where we staked out a Heliconia patch for a visiting White-tipped Sicklebill (a large hummingbird) – successfully! Other neat birds seen there included Red-faced Spinetail, Golden-olive Woodpecker, Olivaceous Woodcreeper, and Tropical Parula. The next stop was Cinchona Café, where we had great looks at Northern Emerald Toucanet, Prong-billed Barbets, a Buff-fronted Quail-Dove, and a beautiful Barred Hawk that soared by. From there it was on to La Paz Waterfall Gardens, which hosted some fabulous hummingbird feeders, and spectacular views of waterfalls. An Ornate Hawk-Eagle soared overhead, and we saw Spotted Barbtail, Slaty-backed Nightingale-Thrush and several Costa Rican Warblers. After lunch we took the long drive north to the Caño Negro area (almost to the Nicaragua border), with a short stop to look at a Jabiru nest in a large Ceiba tree.

The next day (March 6) we took two boat tours on the river through the Caño Negro Refuge – one in the morning and one in afternoon. Some of the new birds in this area included Olivaceous Piculet (a tiny woodpecker), Pied Puffbird, Spot-breasted Wren, and Bare-crowned Antbird. Rather surprising was seeing a large flock of American White Pelicans, which are quite rare this far south! 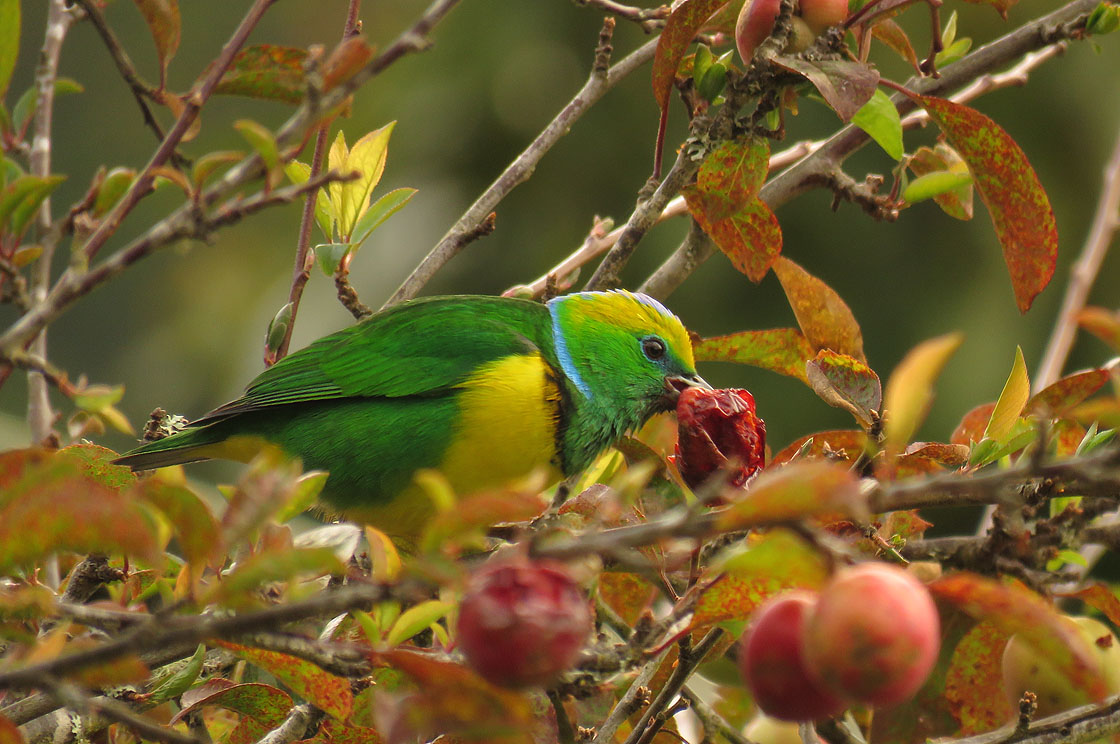 We left the area the following morning and found Nicaraguan Seed-Finch, Ruddy-breasted Seedeater and Red-breasted Meadowlark along the entrance road. We took another boat trip on the much smaller Medio Queso river later that morning, and saw a number of Pinnated Bitterns and Purple Gallinules, and a couple of Lesser Yellow-headed Vultures. We heard some tiny Yellow-breasted Crakes, but unfortunately weren’t able to spot one.

We drove to the vicinity of the Arenal Volcano and stayed at the Arenal Observatory Lodge for a couple of nights. The gardens there are lovely, and we were able to spot Great Curassow, Black-cheeked Woodpecker, Hepatic Tanager and many other species on the property and at the fruit feeders. A Tamandua Anteater ambled by, providing nice looks at this beautiful mammal. A visit to a nearby forest near Lake Arenal produced Keel-billed Motmot, Fasciated and Great Antshrike, as well as Squirrel Cuckoo, Long-tailed Tyrant, and Northern Bentbill.

On March 9 we visited the Arenal Hanging Bridges, where it rained nonstop all morning. We were lucky and found a huge swarm of Army Ants with a nice selection of birds attending – including Ocellated, Bicolored and Spotted Antbirds, a Great Antshrike, along with a couple of Rufous Motmots. Other birds observed included a pair of White-throated Shrike-Tanagers, Streak-crowned Antvireo, and Blue-and-gold Tanager.

Our final night was spent in San Jose, not far from the airport, and the following day we flew back to Wisconsin (with one couple returning to their winter home in Arizona).   We had a wonderful group of participants on this tropical tour, with many fond memories from the experience.

Looking back at our bird totals, we ended up with a group list of 497 species, of which 7 were “heard only”. Among these we had 14 species of herons, 22 hawks & vultures, 17 dove & pigeons, 38 hummingbirds, 13 parrots, 18 antbirds, 16 woodcreepers & furnariids, 19 wrens, 35 tanagers & allies, and 52 species of flycatchers. We also observed 20 different mammals during the trip. The diversity there is truly amazing! 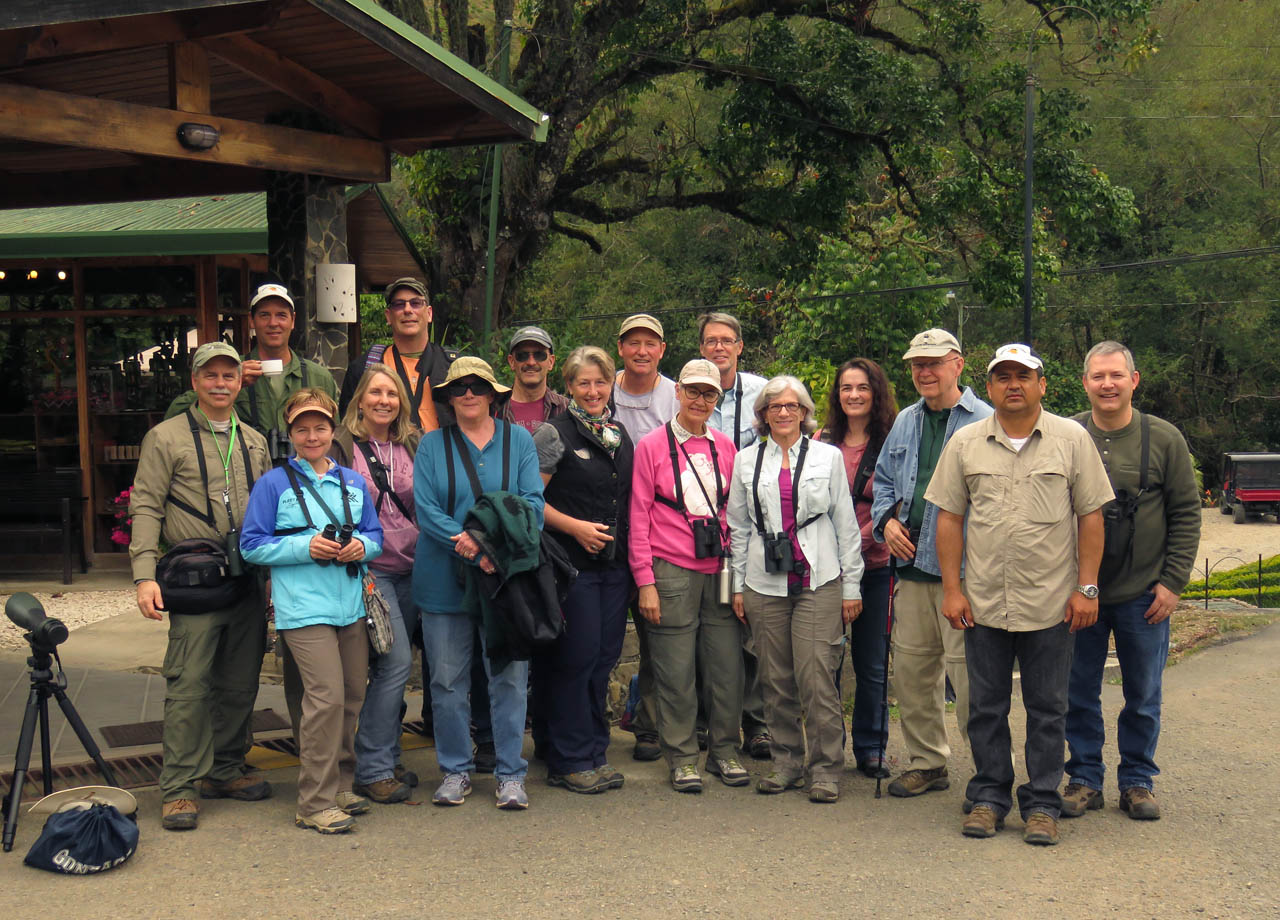