This year the field trip attendees gathered at the Buena Vista Grasslands kiosk along Hwy. W, around 8:00 AM.  The weather was unusually mild, with a starting temperature of about 30 degrees.  The sky was partly cloudy, the winds were light to moderate, and there was very little snow on the ground.  We had no trouble with snowdrifts and impassible roads this year!  There were some very slippery ice patches in places, however, and spots where the thin ice had standing puddles beneath.  Our birding group today contained ten individuals. 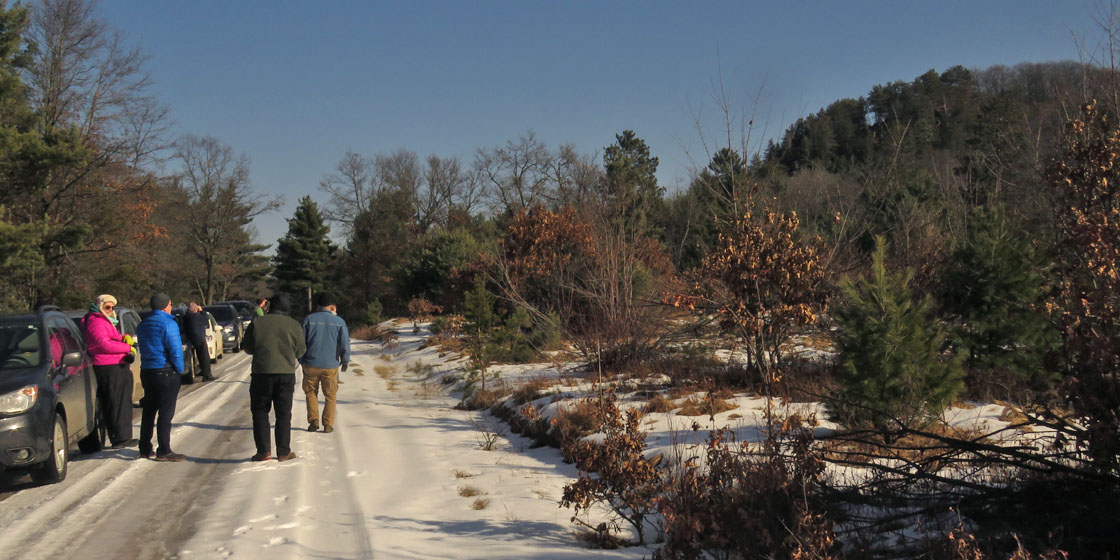 From the kiosk we headed east on Hwy. W, and we spotted crows and American Tree Sparrows along the way.  Our first stop was in the vicinity of a Snowy Owl, which we found on the ground to the north of the highway.  Another individual was then spotted at the same location.  Initially it was up in a roadside tree, and then it flew back to perch on a big irrigator.  We were able to determine that this one was carrying a backpack transmitter, and was likely the WSO-sponsored bird, “Bancroft”, which was trapped and tagged in that vicinity early this month.
From there we turned left on Taft Road and headed north, and we soon spotted another Snowy Owl out in the field to the west.  While we were observing it, TWO MORE Snowy Owls were spotted in the same area!  One was perched atop a distant snowdrift, and the other sitting on the tire of another irrigator.  A little ways further north we had a nice flock of Snow Buntings fly over, and then we watched them swoop down over a large ag field.  A couple of Horned Larks were also present. 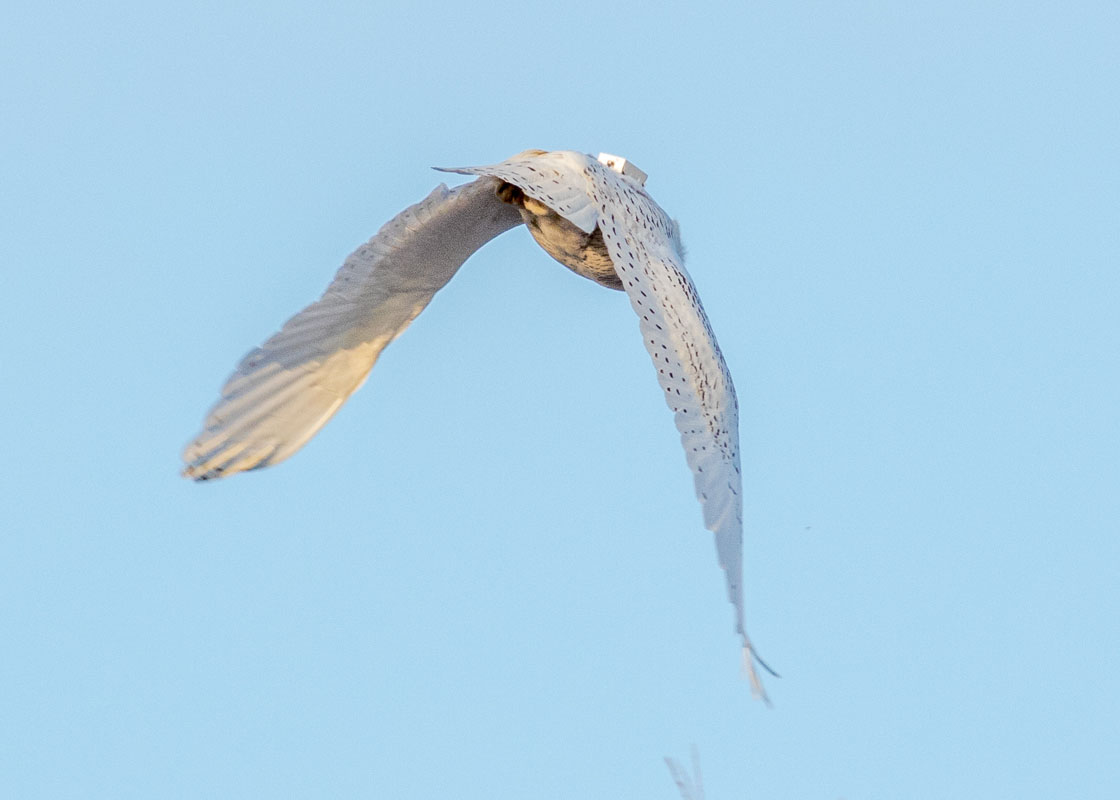 A turn to the west took us along Lake Road, where we spotted another Snowy Owl, as well as a nice flock of Common Redpolls (about 35) that kept moving ahead of us as we proceeded.  Reaching Townline Road we turned south.  A little ways past Hwy. W we encountered another Snowy Owl (our 7th for the day!), and also a Rough-legged Hawk.  The feeders further south were unfortunately largely empty, so we didn’t see much but chickadees there.  Our route then took us west on Tower Avenue to Hwy. 73, which we took northwest toward Nekoosa – a city that borders the Wisconsin River.  Several crows and a Common Raven were spotted along the way.
We continued on to the Babcock area and then followed Ball Road to the west, along the southern border of the Sandhill Wildlife Area.  Along that stretch we spotted Rough-legged Hawks and a Bald Eagle, but the wetlands and forests there seemed largely birdless.  Turning south on Cranberry Road we soon spotted another Rough-legged Hawk.
When we reached N.  Bear Bluff Road we turned west, and took it to Deer Island Road.  Shortly after we rounded that corner we spotted a Ruffed Grouse along the left edge of the road.  Unfortunately the cars in the back had trouble seeing it, due to the corner being right there, and as we tried to move up the bird moved off into the forest and then took off.
Out among the cranberry bogs we stopped to scan Bear Bluff for a possible Golden Eagle, without success, so we decided to turn west on E. Bear Bluff Road and drive right past the bluff.  Just beyond it we stopped for about 30 minutes and waited (some eating our lunches) while we scanned again for a Golden Eagle, but again we were unsuccessful.
Further down this somewhat snowy and rutted road we turned left on Goodyear Road, and headed to the southeast.  This area also seemed largely birdless, although we did have a couple of Wild Turkeys cross the road in front of us.  From there it was on to Mather, then south on H to and beyond Highway 21 – to visit some feeders along 2nd Avenue.  Unfortunately we found that the feeders there were empty, so we continued on to Necedah, and after a rest stop it was on to our final stop at Petenwell Dam on the Wisconsin River.  At the dam we counted about 9 Bald Eagles, with many perched about on the trees along the river, and some flying about from time to time.  While we watched, one of them swooped down and caught a fish!
Thanks to Jeff Baughman for co-leading this trip, and to all who participated on this mild and sunny winter outing!
Tom Schultz, WSO Field Trips co-chair 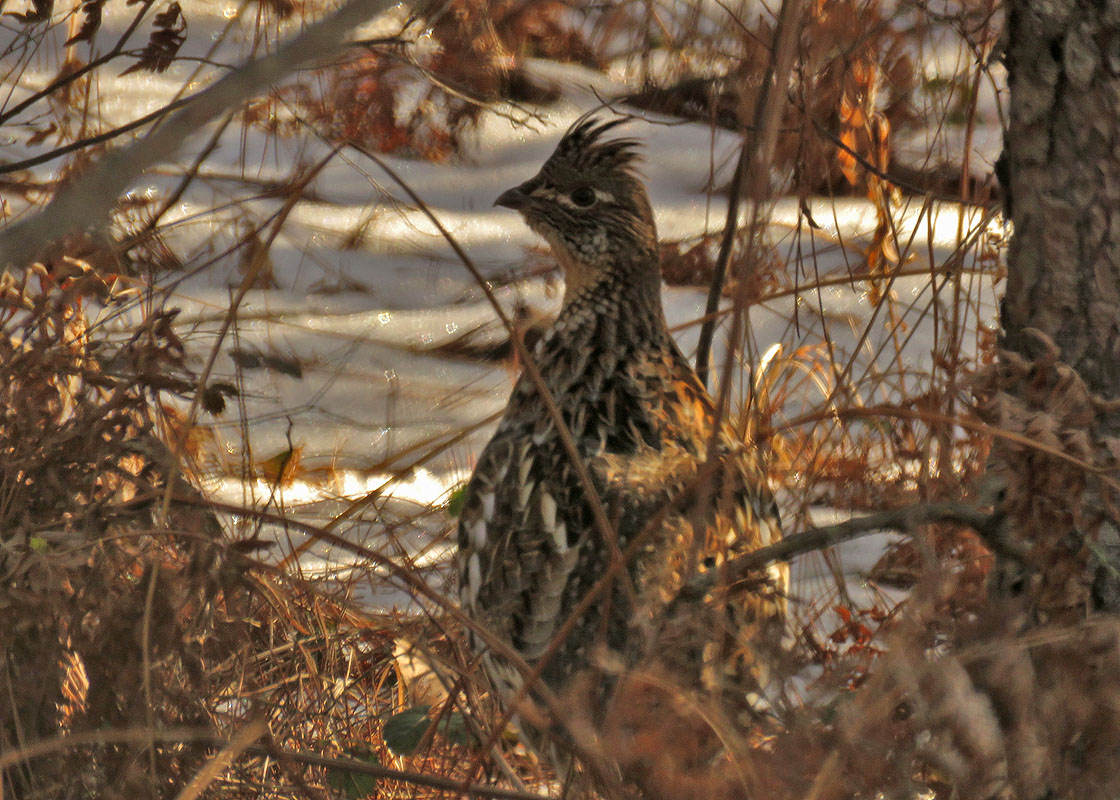