About 16 birders gathered at 8:00 AM on January 28 along Hwy. W in Portage County (just NW of Bancroft) in the Buena Vista Grasslands. The skies were cloudy, and there was a moderate west wind, but at least the temperatures were well above zero this time – in the mid-20s. After sharing greetings, and waiting a short time for late arrivals, we headed west to Taft Road, and then took it north.

A little ways beyond the Lake Road intersection we stopped to check out some bird feeders, and found Mourning Doves, a Black-capped Chickadee, juncos and an American Tree Sparrow. The group U-turned and headed back to Lake Road, which we took to the west. Not far down Lake Road we ted a Greater Prairie-Chicken on the north side, and when we stopped to scope the field we were able to discern about six more individuals. Unfortunately, the only other birds found along this stretch were American Tree Sparrows. This general lack of roadside birds proved to be typical for the day – likely due to some of the heavy snowfalls we’ve had this winter, which really seemed to flatten out the weedy vegetation.

We turned south on Townline Road, then east on Hwy. W to Elm, only finding crows and starlings along the way. About 0.7 mile south of W we stopped along Elm Road to view one of the WSO properties on the Buena Vista – this one a 20-acre parcel.  These two properties (the other a 40-acre parcel) were purchased by WSO back in the late 1950’s, and both placed under a long-term lease to the DNR for prairie-chicken management.  While at this stop we spotted a Northern Shrike atop a distant tree, and most were able to get scope views.  Farther down the road we added a Blue Jay.

The group took Mill Road west to Townline, then south to a stop near a home with several bird feeders, the homeowner greeted us along the road with his very furry, friendly dog.  In and around this area we observed Bald Eagle, Red-tailed Hawk, Mourning Dove, Downy and Pileated Woodpeckers, White-breasted Nuthatch, Northern Cardinal, and others. 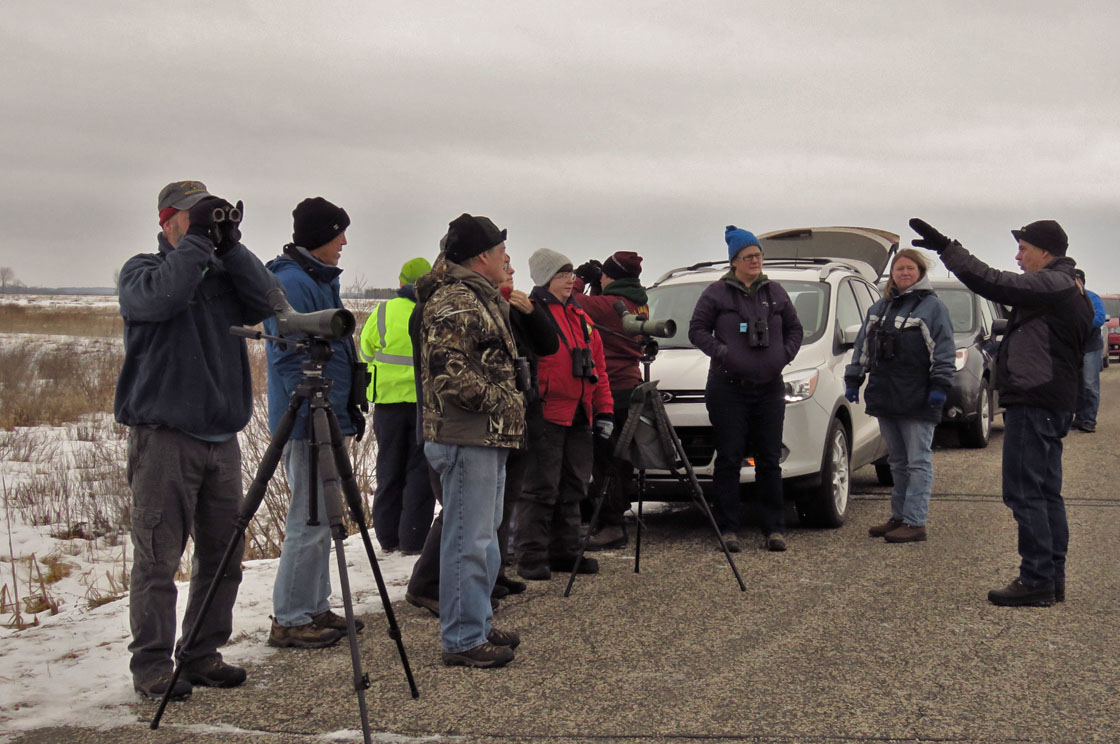 We continued south on Townline, then west on Tower Road to Hwy. 73 – with a gas station pit stop near the Hwy. 13 intersection – and drove through Nekoosa and west to Babcock and Ball Road, skirting the south side of the Sandhill State Wildlife Area. Once again, this area was very quiet, and we found only a few birds along this nine-mile stretch – such as Rough-legged and Red-tailed Hawk, Pileated Woodpecker, and a few crows.

Our group headed south on Cranberry Road, then west on N. Bear Bluff Road, and then turning west again on E. Bear Bluff Road, passing close to Bear Bluff itself – where our target bird was Golden Eagle. We stopped adjacent to the bluff, and were very pleased to spot one fairly quickly as it flew not far from us, and we had great looks as we watched this bird for several minutes.

We continued west and the road eventually took us to Hwy. O and then south and east to the village of Mather. From there we took Hwy. H and then 9th Street across the Necedah NWR to Hwy. 80, which we took south. Just a short distance down the road we spotted a group of crows, and nearby were a couple of Common Ravens – another one of our target birds for the trip.

We ended the field trip at the Petenwell Dam, on the Wisconsin River just a few miles east of the city of Necedah.  The highlight there is always the Bald Eagles that perch and fish just below the dam.  There were virtually no waterfowl present, however – except a lone American Goldeneye that was spotted briefly as it flew downstream.

Thanks to everyone who participated in this field trip, and to Jeff Baughman for co-leading. As is often the case, this outing didn’t produce large numbers of species or individuals, but rather a series of interesting target birds.