As usual, there was great anticipation on Friday, Sept. 18 as birders began arriving on the beach prior to sunrise on Wisconsin Point near Superior. The week leading up to this event had produced fairly steady jaeger action, and to top it off, a California Gull had been present for the past couple of days!

The morning dawned clear, with a beautiful orange glow in the eastern sky and mild temperatures in the low 50s. With just a light NW wind, the lake was pretty quiet as we arrived, and there were few birds to be seen other than a few gulls – but as we scanned out over the water, there were lots of silhouettes of gulls flying in the distance. We soon started throwing bread out to attract Ring-billeds, and soon they started arriving from all directions! One of the things we have learned from the years we have had this field trip is that attracting gulls to our vicinity can really help to bring jaegers in for closer views.

A Black-bellied Plover flew over, and a few birds were spotted in the trees behind us – including Yellow-rumped, Blackpoll and Palm Warblers, and Red-eyed Vireo. Sanderlings flew past and sometimes landed on the beach, along with a Ruddy Turnstone. A group of 18 Common Terns flew past the group, followed shortly by the first Parasitic Jaeger of the day – a juvenile – about 7:55. It cruised past, heading east, then flew back out and landed on the lake – though a fairly good distance out.

Soon after that, a Northern Harrier was spotted as it flew in from offshore, and then continued south. Around 8:15 a Lesser Black-backed Gull was sighted as it floated among a large flock of Ring-bills, and Horned Grebe and Green-winged Teal were also observed.

At 9:20 AM the first-year California Gull was spotted among the other gulls. It drifted around for a while, gradually coming nearer – apparently curious about our feeding of bread to the other gulls – and then eventually it came right in and joined the Ring-bills just offshore, and sometimes right on the beach at very close range! 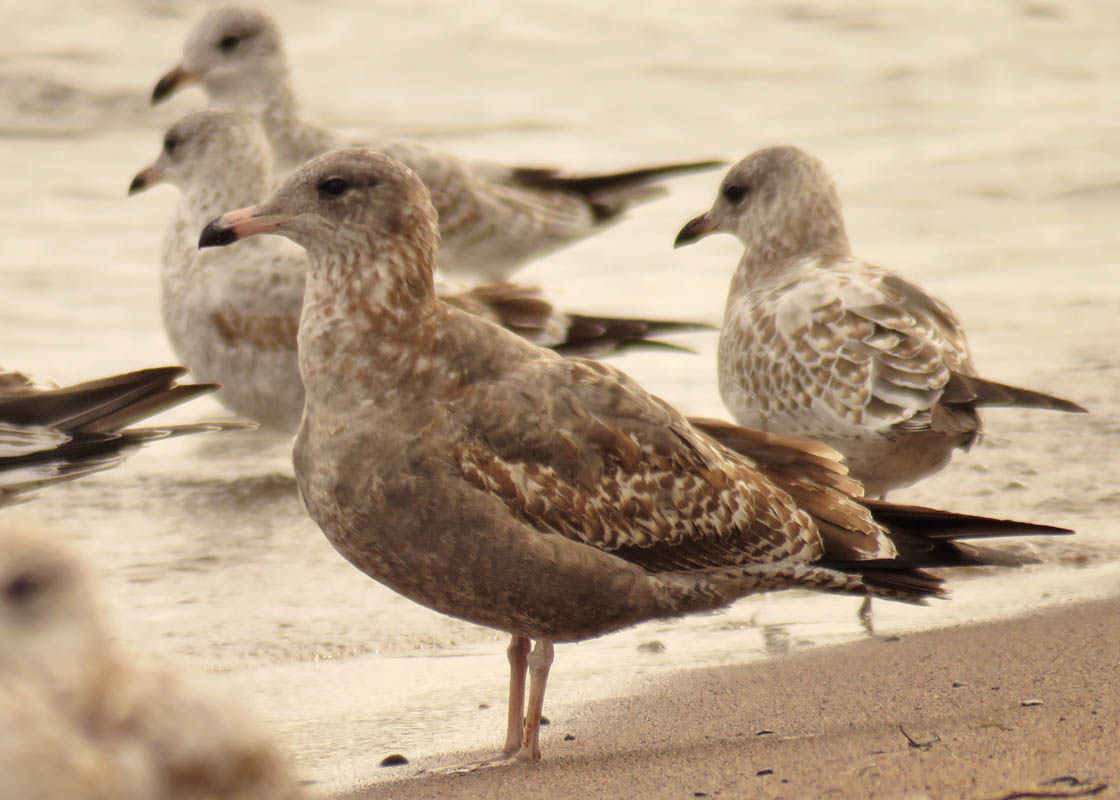 An adult Parasitic Jaeger (a pale-morph with a moderately long and pointed tail projection) was sighted about 10:20 AM as it came flying in and started harassed various gulls, and soon it was joined by a juvenile Parasitic and they flew around together – sometimes chasing one another. These two put on a great show for nearly 10 minutes, and provided very nice views for our group! A little while later a Sharp-shinned Hawk flew over, heading south.

The afternoon was fairly slow, with periodic repeated views of the juvenile Parasitic Jaeger, and a couple of Red-necked Grebes were also spotted swimming offshore. Many birders left the beach at various times to look for passerines down the Point toward the lighthouse, and a decent variety of warblers were observed – although the numbers were fairly small. The species total for the day was 95. Most birders left the Point by around 4 or 4:30 PM.

Saturday also dawned clear with just a few clouds, and early morning temperatures in the mid-40s and a light to moderate west wind. Gulls began arriving, along with a lone Sanderling – to be joined by more later. A few passerines were in the trees, and there was a little excitement as a Philadelphia Vireo was spotted around 7:30. Shortly after that our attention was drawn back to the lake, as Bonaparte’s Gull and Parasitic Jaeger were spotted – followed soon after by the arrival of the California Gull, and then an adult Lesser Black-backed was found swimming well offshore. Two Snow Geese were also spotted, winging overhead toward Allouez Bay.

A group of about eight American Golden-Plovers came past the group, heading southward, and a Merlin was observed flying toward shore from across the lake and disappeared as it crossed over the trees behind us. More sightings of a Parasitic Jaeger juvenile followed – likely the same bird that we’d been seeing, and this would continue to happen periodically through the day. A Common Loon was spotted on the water, and an American Black Duck was observed, then a bit later an adult Sharp-shinned Hawk flew right past the group.

Around 12:30 a group of Sanderlings again winged past, this time accompanied by a Baird’s Sandpiper and a Ruddy Turnstone – the latter of which returned several times and provided good opportunities for close observation and photos. 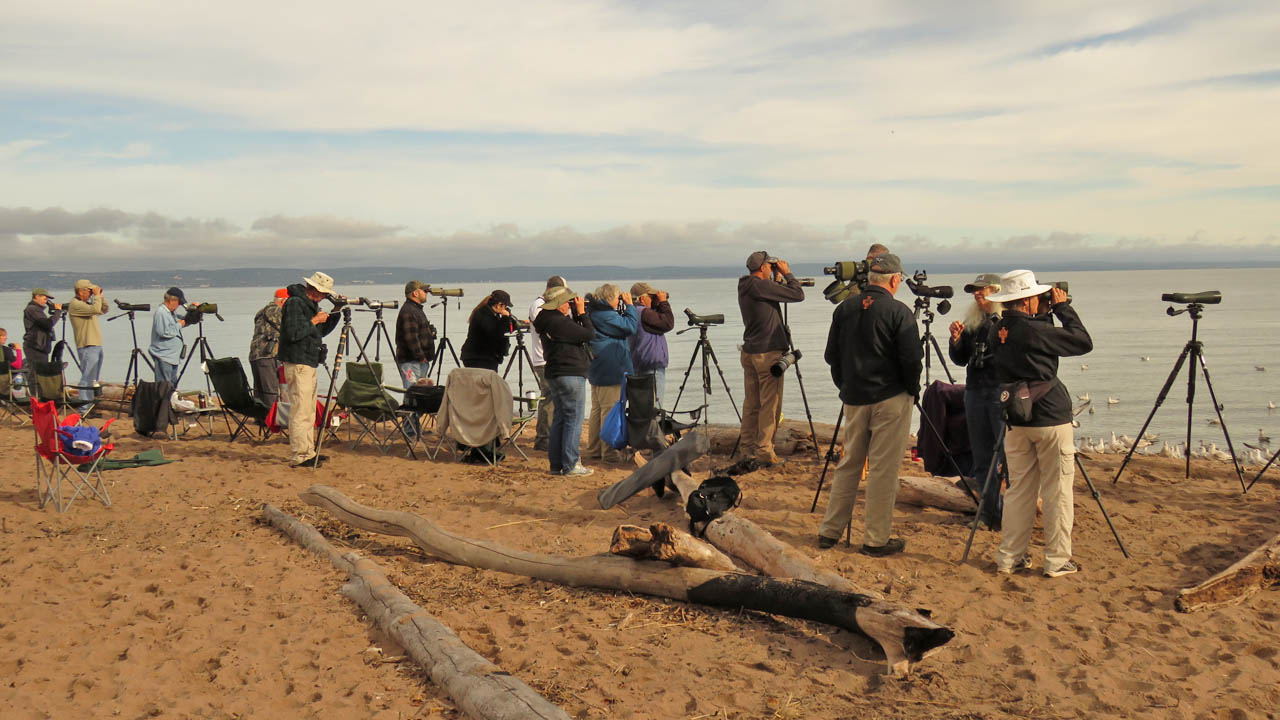 At around 3 PM, one birder happened to peer skyward at another bird and suddenly noticed that Broad-winged Hawks were soaring high overhead. They were so high in the blue sky that they were not visible without optics, but as everyone began scanning and looking closer, it soon became obvious that there were LOTS of these Broad-wings in view. A firm count was impossible, but estimates were made there were over 500 hawks present! A little while later a second kettle of Broad-wings was discovered moving southward, and then other groups nearby – and we decided that this cluster was roughly the same size as the first group – meaning that we had now observed about 1,000+ Broad-winged Hawks migrating overhead! We learned that counters on Hawk Ridge in Duluth had counted over 8,000 of these hawks today.

To top off the day, a juvenile Parasitic Jaeger that had been chasing gulls and paused occasionally to rest on the water, made its closest landing yet and provided great views of its intricate feather patterning. The bird total for the day, though not as high as Friday’s, was a respectable 81.

On Sunday morning the sky again was mostly clear, with just a few scattered clouds – but as the sun started coming up the scene was a spectacular red-orange. Ring-billed Gulls started arriving by about 6:30 AM, as we worked to attract them with bread scraps. A couple of dozen Canada Geese were on the water, accompanied by a few American Wigeon and teal.

Around 7:15 a weird-looking gull was spotted swimming with Ring-bills well offshore. It appeared to have an extensively dark hood, but in all other respects it appeared to be a normal adult Ring-billed Gull. Unfortunately it was too far out for good looks or photos. Soon a couple of Bonaparte’s Gulls were also spotted, and the California Gull arrived a short time later.

At 7:45 a Parasitic Jaeger was observed swimming on the water, in the vicinity of six Bonaparte’s Gulls, and a short time later a Forster’s Tern flew right over our group. The Parasitic would periodically take flight and chase gulls, providing good looks before usually landing on the surface again. The field trip wrapped up by around 9:30 AM, as most folks were leaving the Point to head home. Thanks to 90+ birders who participated in Jaegerfest this year – good birds are always expected, and the camaraderie is always a highlight! 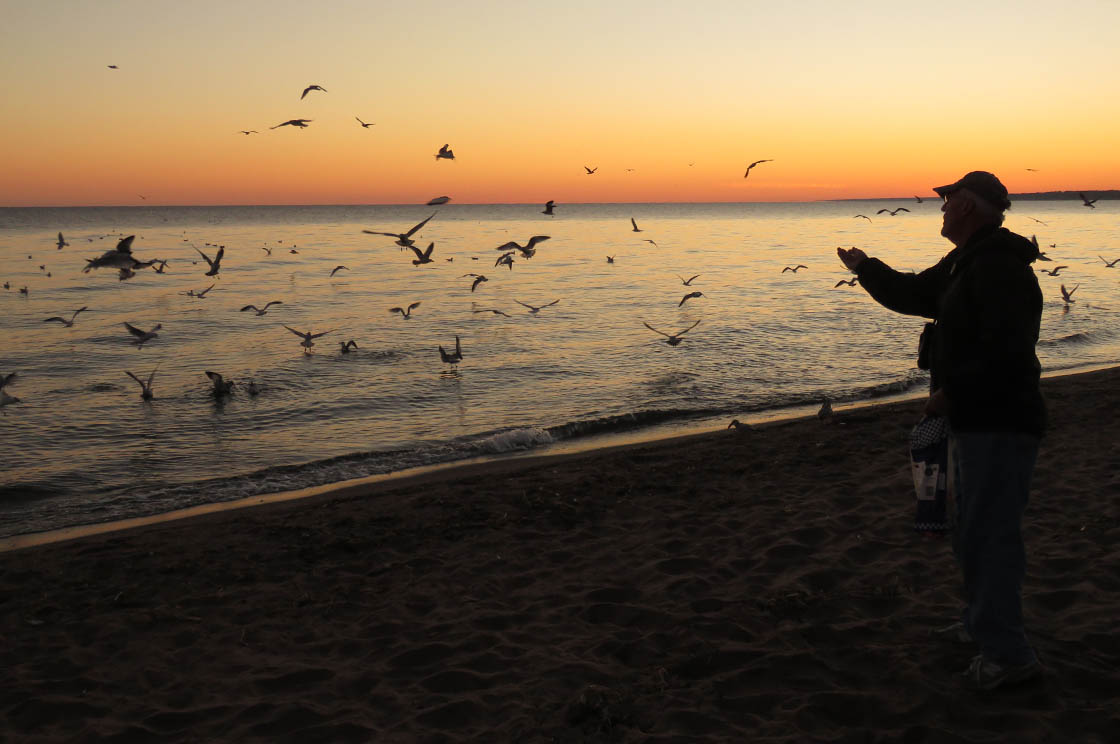