The first summer of the five-year Wisconsin Breeding Bird Atlas II project is coming to an end, but the phenomenal work completed by Atlasers this season has established a strong foundation to build upon in the years to come. The project already has confirmed 211 species as breeding in Wisconsin, eight of which are rare breeders in our state that were not confirmed at all during the first Atlas. These include Whooping Crane, Kirtland’s Warbler, Eurasian Collared Dove, European Goldfinch, Great Tit, Yellow-throated Warbler, White-eyed Vireo and Bufflehead. Among the most recently confirmed species added in the last month: Northern Saw-whet Owl and Olive-sided Flycatcher. 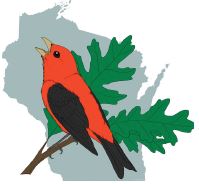 As of late August, 678 eBird participants had submitted 22,963 checklists, approaching the organizers’ first year goal of 25,000. Atlas director Nick Anich urged birders statewide to submit any outstanding lists to capture data before it gets lost or forgotten. Data shows where to head next. As we wrap up this year’s breeding season, the focus of the Atlas project is turning from field work to exploring data. First-year numbers can help determine many things, such as where atlasing is and is not taking place, what species are being found in abundance or not being observed at all, and thus offer guidance on where to focus next season.

The Atlas is built upon a grid system that segments Wisconsin into blocks, and one out of every six blocks has been deemed a "priority block". There are also designated "specialty blocks" interspersed throughout the state, which are important to the survey because they comprise an area of special interest. By the time atlas field work wraps up in 2020, each of these priority and specialty blocks needs to be properly surveyed and completed.

There are 1,283 priority and specialty blocks, and data already has been gathered in 751 of them, nearly 60%. Great work, but still leaving a lot of Atlasing to get done. Of the 72 counties in Wisconsin, 10 have data recorded in less than 35% of their priority and specialty blocks: Menominee, Langlade, Shawano, Clark, Jackson, Chippewa, Pierce, Lincoln, Rusk and Ashland. These are great areas to Atlas. Will your travels next spring and summer take you to, or through, one of these areas most in need of surveying?

Some counties outperform- 10 counties already have data recorded in all of their priority blocks: Calumet, Eau Claire, Florence, Fond du Lac, Green, Kenosha, Kewaunee, Milwaukee, Ozaukee, Pepin, and Waushara. While this certainly doesn’t mean you can’t atlas in these areas — the more data the better — it does mean that if you’re looking for a new area to atlas, you’d serve the project better by choosing priority blocks outside of these counties. Again, popular blocks are popular because a lot of people live or bird there. If you are there too, go ahead and atlas!

Even blocks for which a lot of data has been recorded are not necessarily complete. You could be the one to do it. Once you’re looking for a new spot to atlas, however, consider a block that needs extra attention. And while these are the 20 counties on the far ends of the data spectrum, the other 52 fall somewhere in between. If you’re looking for data on a particular county, the best way to find its coverage needs is to go to the “Explore Data” section of the eBird Atlas portal. Choose “Explore a Region” and simply type in a county to pull up the overview.

“Make it a habit to atlas wherever you are,” suggested Anich, who is a conservation biologist with the state Department of Natural Resources in Ashland. "If you're in the state of Wisconsin, you are in a good place to Atlas."

Atlas data is tracked in real-time and is available for anyone to view in the “Explore Data” section of the eBird Atlas portal (http://ebird.org/ebird/atlaswi/places).There, you can get an overview of the whole state to see what species have been found,how many birds per species, the level of breeding observed, and whether that species has been found in regular atlas blocks, priority blocks, or both. For a graphic overview, check out the new species locator map, a great tool developed recently by eBird programmers that can display where in the state an individual species has been observed, and the level of breeding confirmation. How you can get involved -- Join the atlas email list for regular updates on the project: atlas-email-signup http://wsobirds.org/ -- Get a quick overview of how to get started: http://wsobirds.org/atlas-quick-Start --Check out the Wisconsin Breeding Birds Atlas II Handbook for comprehensive instructions on how to help: http://wsobirds.org/images/atlas/WBBA_II_Handbook.pdf -- “Like” the WBBA II Facebook page: https://www.facebook.com/WIBreeding