Our group met at South Shore Yacht Club on Sunday, January 8, with an 8:00 AM start time.  The temperature was in the mid-20s, under cloudy skies, and light to moderate winds from the southwest. One of the first birds spotted was pretty exciting…  a ROSS’S GOOSE, which was hanging around with a group of CANADAS.  After a short time the flock took flight, giving us great looks as the departing ROSS’S GOOSE flew right past us.

A variety of ducks were present, although many were fairly distant, requiring scope views.  These included RED-BREASTED and COMMON MERGANSERS, COMMON GOLDENEYE and BUFFLEHEAD, with quite a few MALLARDS close to shore.  Two BALD EAGLES were spotted sitting side-by-side up in a tree, with a flock of EUROPEAN STARLINGS and an AMERICAN ROBIN perched nearby.  The group also had nice looks at a HORNED GREBE that was swimming in the harbor. 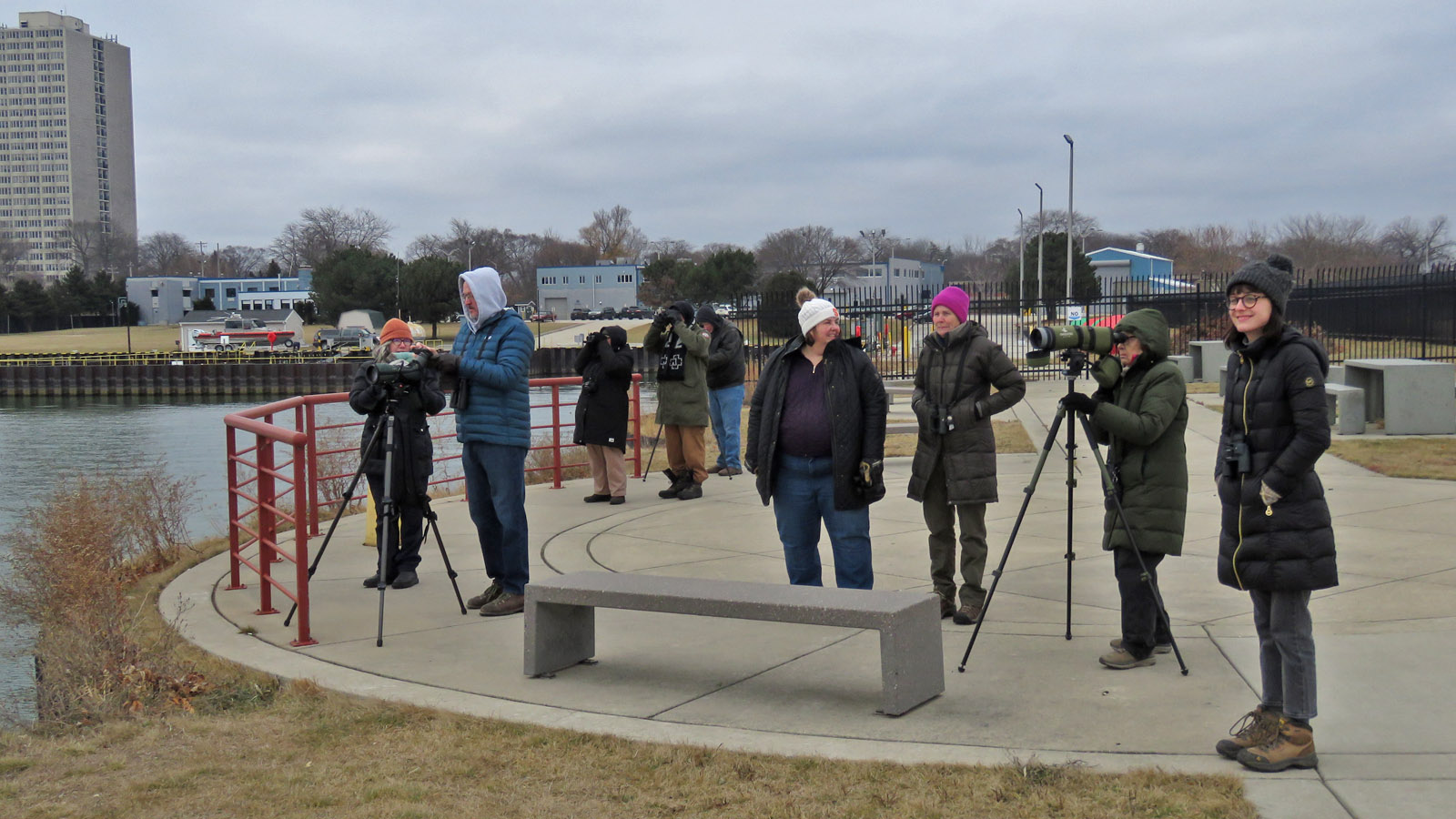 Our next stop was at the Lake Express Ferry dock, where a couple of adult GREAT BLACK-BACKED GULLS were sitting with HERRING GULLS along a concrete breakwall.  A number of ducks were present, once again, including more RED-BREASTED and COMMON MERGANSERS, GREATER SCAUP, a lone LESSER SCAUP, BUFFLEHEAD, with a few others.  A COOPER’S HAWK was spotted sitting in a tree to the west of us, and we had nice scope views.

From there we drove south down Lincoln Memorial Drive, and gathered near the North Point Snack Bar.  A large raft of COMMON GOLDENEYE (we estimated 2000+) was swimming offshore, with some GREATER SCAUP mixed in also.  We were pleased to find a female BLACK SCOTER among the flock, and then a WHITE-WINGED SCOTER.

A little further north we parked along the shore south of the Linnwood Water Treatment Plant, and found more ducks to scan.  We did a rough count, and figured there were at least 6000 more COMMON GOLDENEYE here.  More GREATER SCAUP were also present, as well as RED-BREASTED MERGANSERS, and we also spotted a couple of SURF SCOTERS – making it a sweep of scoters this morning!

A portion of the attendees continued north to Port Washington, and we pulled in at Coal Dock Park.  The harbor itself had very few ducks present, but there were a few COMMON and RED-BREASTED MERGANSERS present.  One lone gull – an immature HERRING – was flying observed flying around the harbor, but there just weren’t many birds around.  We hiked out to the small lagoon pond that was closer to the lake, where we found a DOUBLE-CRESTED CORMORANT, along with a few MALLARDS and RED-BREASTED MERGANSERS.

Scanning up on the nearby coal power plant, we spotted a PEREGRINE FALCON sitting on a corner of the roof.  A short time later its mate was also found, sitting on a smokestack railing.  We decided to walk closer to the building, and were able to get even closer looks at the cooperative pair of falcons. 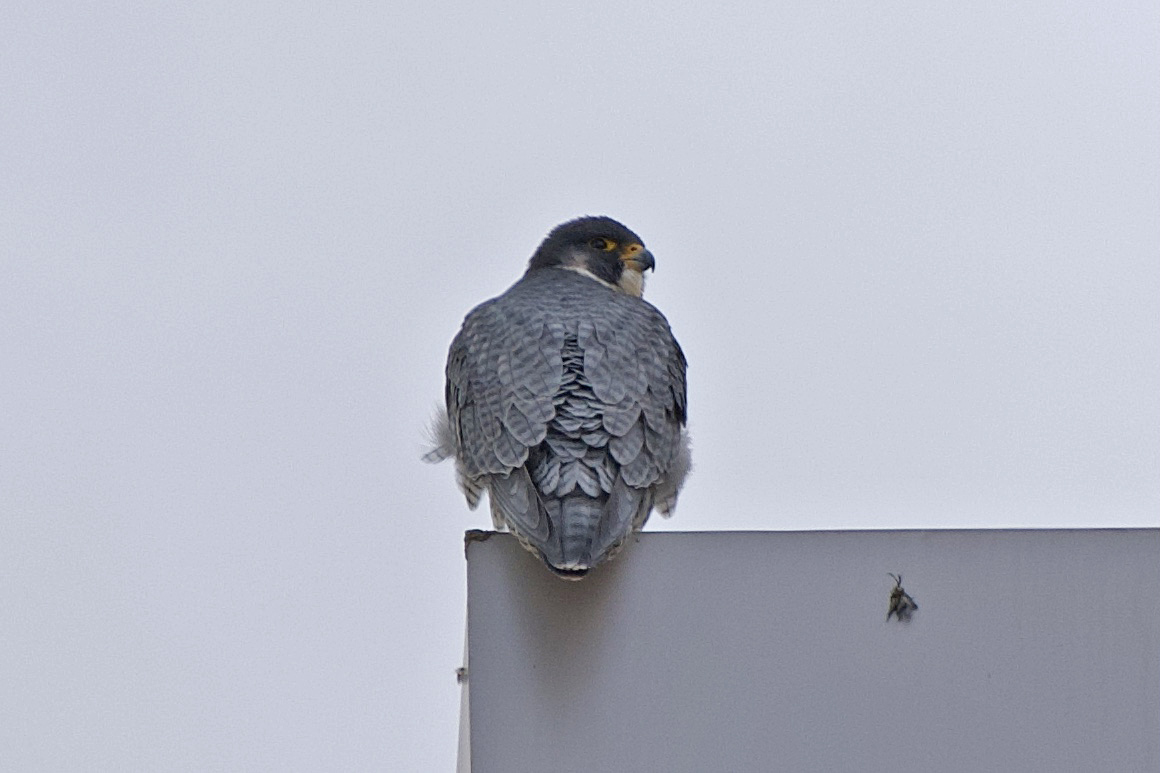 About 10 of us continued north to Sheboygan and checked out the lakefront and marina areas. Lots of MALLARDS were present, along with a few RING-BILLED GULLS and a few dozen HERRING GULLS.  Among one group of sitting gulls we spotted a couple of ICELAND GULLS, and were able to study them through our scopes.  From the shore at North Point, just north of the parking area, we found a LONG-TAILED DUCK that was swimming well offshore, with several BUFFLEHEADS and RED-BREASTED MERGANSERS.  We also spotted an adult GLAUCOUS GULL as it floated in the same general area.

We drove down to the marina, where the water was partly open, but also had a fair amount of ice.  Here we had great looks at two male HARLEQUIN DUCKS, as they swam around, flew a couple of times, and sat on the rocks.  They were loosely hanging around near a couple of groups of MALLARDS.  Out on the ice we found another adult GLAUCOUS GULL that was standing among a group of HERRING GULLS, and it was later joined by an ICELAND GULL – an individual that looked very similar to the one we’d seen near the jetties a little while earlier. 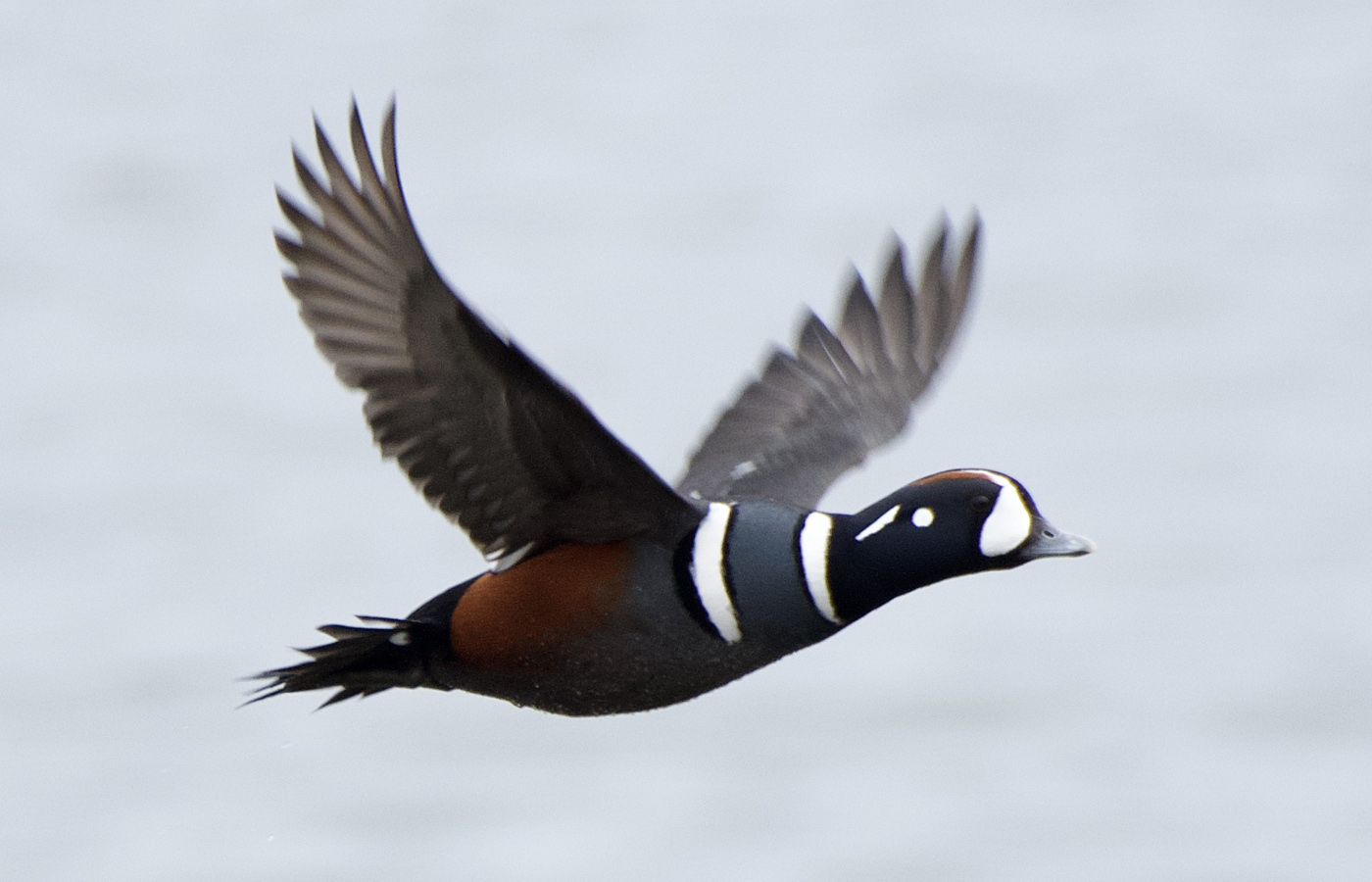 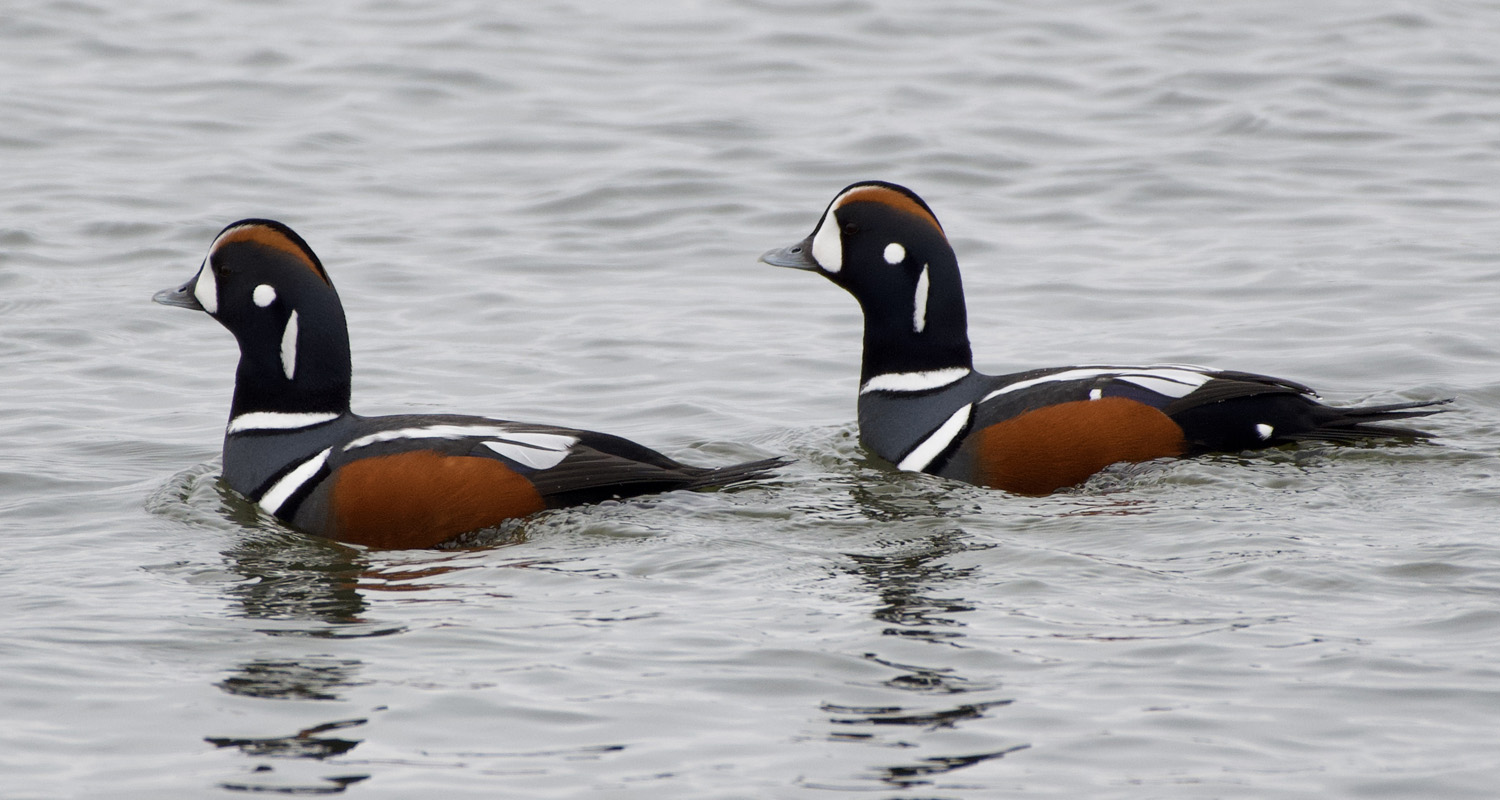 We wrapped the field trip up around 1:30, as the remaining participants began heading for home.  Altogether, it had been a great morning, with decent weather and pretty good birds.  I believe our final species total for this field trip was 32, with several nice highlight birds.  Thanks to everyone who attended, and to Jeff Baughman for co-leading this outing.