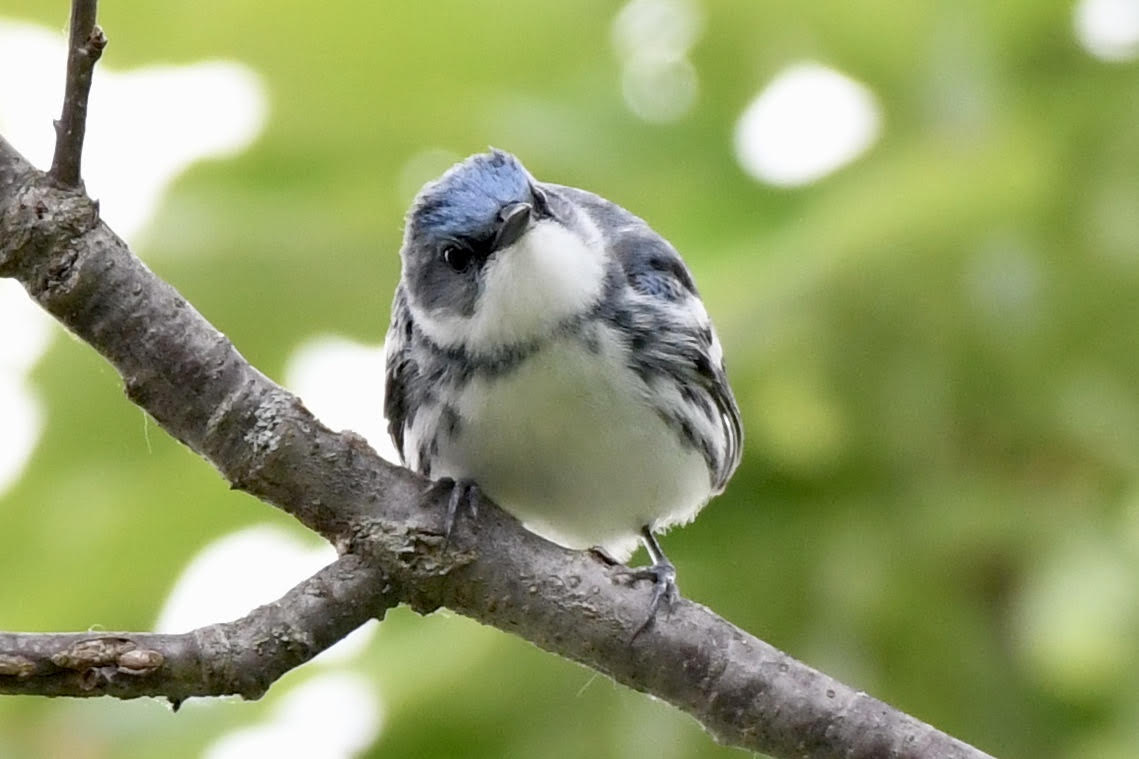 Our group of 19 birders met at Jersey Flats Prairie Restoration Project parking lot at 6 AM to begin our WSO field trip through a small part of the KMSF-NU. After introductions and a brief itinerary, we took a short walk on a mowed trail into the prairie. Soon we had nice scope views of our target species Henslow’s Sparrow. We eventually heard 4 of these small, flat headed sparrows near nearby as well as Sandhill Crane, a resident Red-tailed Hawk, Eastern Kingbird, Eastern Bluebird, Brown Thrasher, Clay-colored and Field Sparrows, Eastern Meadowlark, but the Orchard Oriole singing across the road was a pleasant surprise. We have very few of these birds present within the state forest. We returned to our cars and headed a short distance down CTH SS to where the bird was singing. We finally found a young male (yellow bird with a dark black bib) singing high in a tree right along the road. Unfortunately, he moved several times and only offered limited views.

We then headed to the Zillmer Trail system parking lot to carpool and check for birds around the parking lot. Once we organized our carpooling, we birded around the parking lot. This parking area is bordered by large Red Pines and is a good spot to find Pine Warbler. Soon we heard one singing and eventually had him in view. While admiring the Pine Warbler a Black-billed Cuckoo was heard not far away. With a little coaxing we soon had excellent looks at this handsome bird less than 50 feet away. Here too we had Red-breasted Nuthatch, Least Flycatcher, Red-eyed Vireo, Wood Thrush, a singing Chipping Sparrow (allowing a good comparison with the Pine Warbler’s song) and Mourning Warbler (heard only). 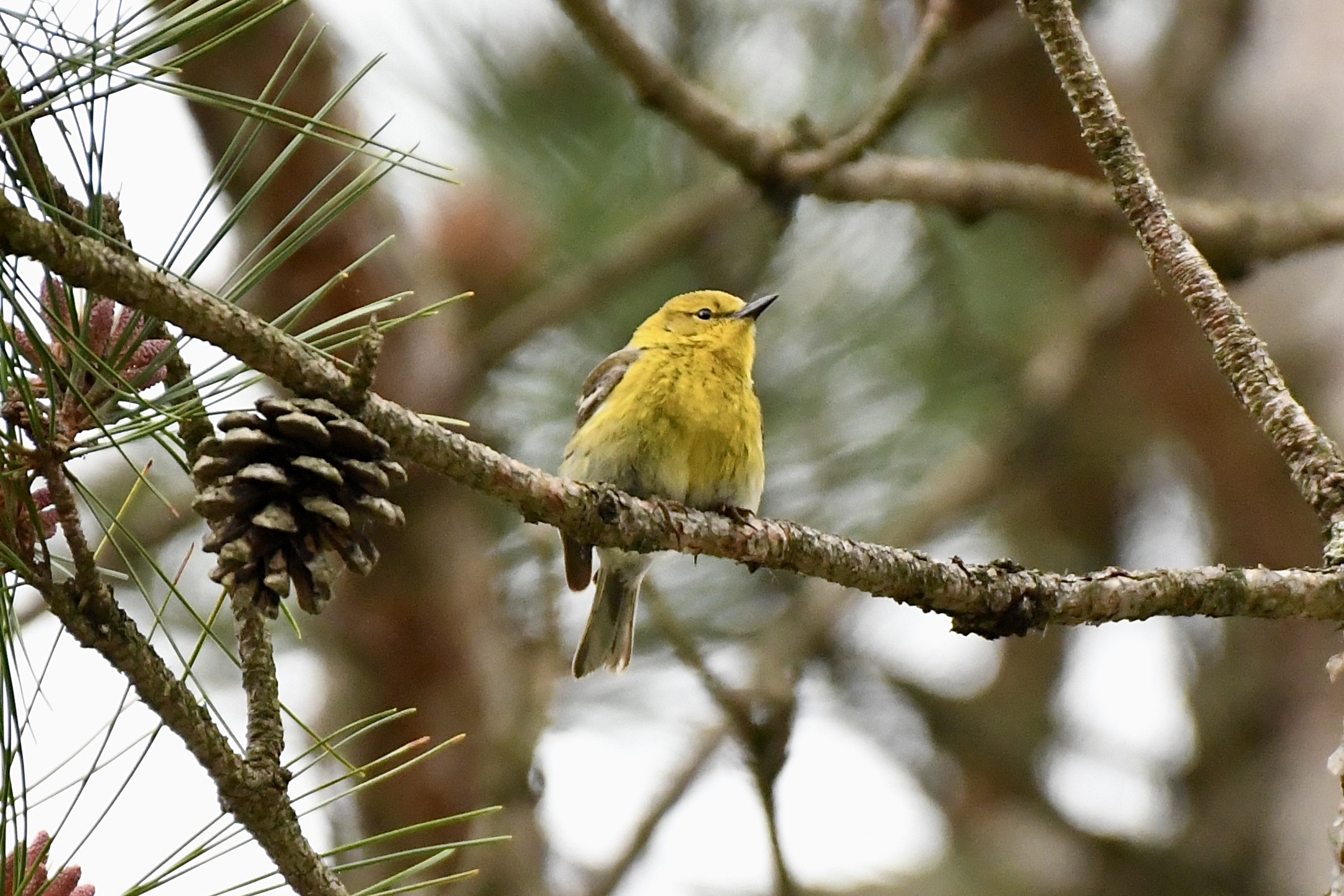 Next was a brief stop at the entrance to New Prospect Horse Riders CampNew Prospect Horse Riders Camp (new entrance). Our target here was Mourning Warbler and he didn’t disappoint. He was singing from his usual perch high in a dead Ash tree when we arrived. Normally, they are found in dense cover and difficult to see but this one likes this particular high, unobstructed singing perch. Other species seen and heard were Pileated Woodpecker, Eastern Wood-Pewee, Yellow-throated Vireo, Gray Catbird, Eastern Towhee, Ovenbird, Scarlet Tanager, and Indigo Bunting.

Our next site was Haushalter Lane. This site is one of the birding gems in the entire KMSF-NU. This 1.2 mile dead end road passes through a variety of habitats and for the most part is fairly secluded. The road ends at  a cul-de-sac where there are two tails, one that goes east and the other north.  We started on the east trail and walked about 0.4 miles to the spring pond. Along the way we had Ruby-throated Hummingbird, a flyover Double-crested Cormorant (uncommon), Alder Flycatcher, Field Sparrow, Eastern Towhee, Northern Waterthrush, Blue-winged, Chestnut-sided, Black-and-white, Nashville, American Redstart, and Yellow Warblers, Scarlet Tanager (an orangish bird), and Rose-breasted Grosbeak. We then returned to the cul-de-sac and took the trail north to the bridge where we added Hairy Woodpecker, Yellow-bellied Flycatcher (late migrant), Sedge Wren, Veery, Swamp Sparrow, and another Mourning Warbler. We returned to the cars and slowly made our way out. Stopping at select few spots for other target species. At the gas line corridor, about halfway out, we stopped. Here we heard Ovenbird, Black-throated Green Warbler, and our targets Hooded Warbler and Acadian Flycatcher. We heard both targets but never got very good looks at either. Haushalter Lane produced 11 species of warblers on the day. A pretty good list of warblers for southern Wisconsin. 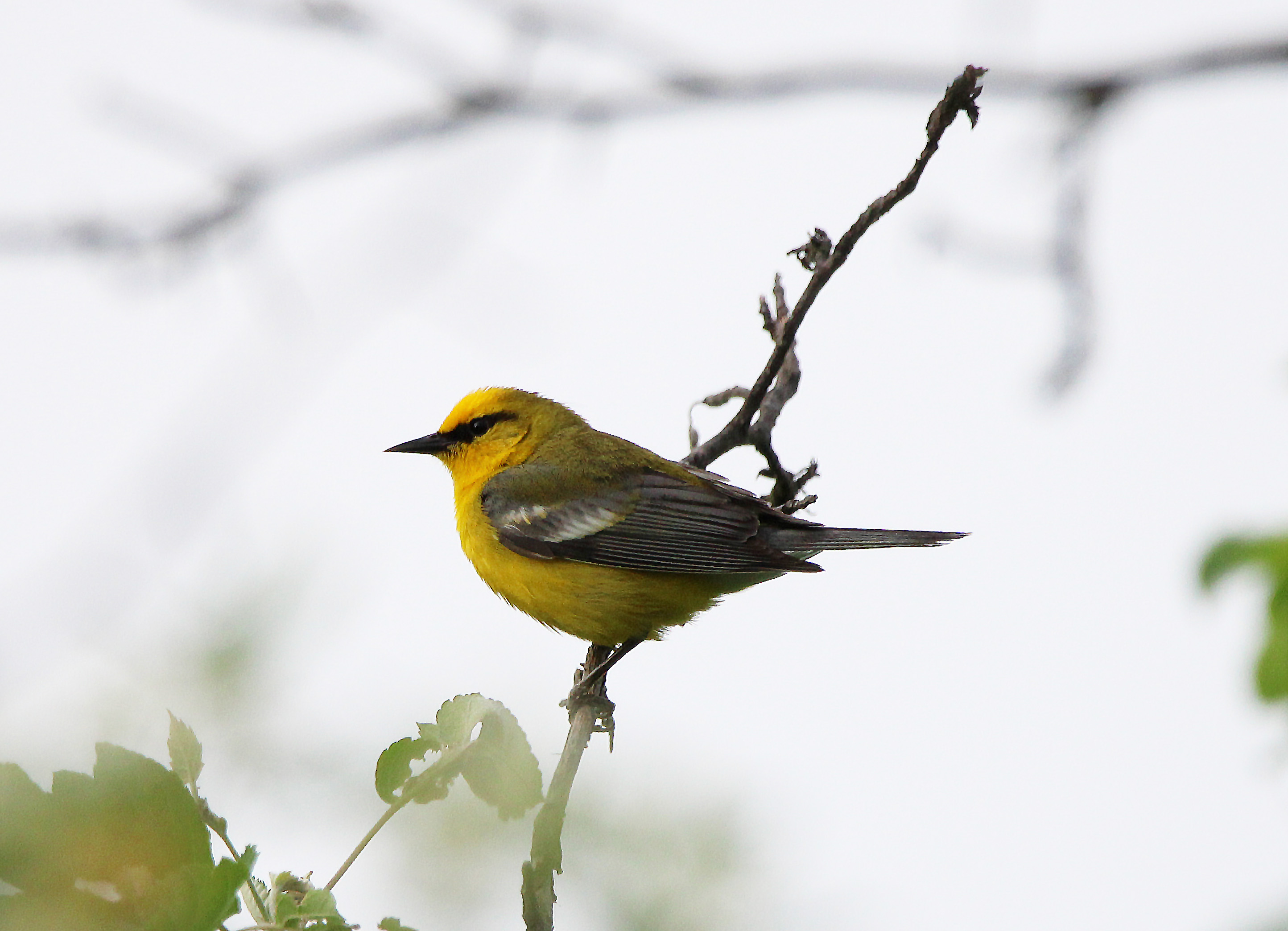 Our next stop was Haskel Noyes Memorial Forest.Haskel Noyes Memorial Forest. From the small parking lot along CTH GGG there is a nice trail for any visiting birder if they have time. Instead, we opted to walk the road south a little ways. It’s here that Acadian Flycatcher and Hooded Warbler frequent areas not far off the road. Again, heard both species well but only had glimpses of the Hooded Warbler as it flew from one side of the road to the other. Since they weren’t being very cooperative we returned to our cars and headed to our next stop.

Mauthe Lake Recreation Area is again one of the gems of the KMSF-NU. Because of its popularity for picnicking, hiking, and camping, it is often the top eBird Hotspot in Fond du Lac County by the end of the year. Mauthe Lake itself adds another habitat component that our other sites on the day didn’t have. Our target here is Cerulean Warbler, often found right in the picnic area. After parking our cars, we made our way along the road bordering the picnic area towards the campground. We met a group of Wausau birders that were camping here and one of them spotted a Common Nighthawk sitting in a tree not far off the road.  Both our groups had knockout looks, where it afforded the photographers, in the group, to take pictures of this uncommon sight. Our group then took a short restroom break before continuing. Fortunately, above the restrooms there was a Cerulean Warbler singing giving us great looks and many photos were taken of this threatened Wisconsin species. Not far away we also found a pair of Baltimore Orioles in the process of building their nest. We then walked along the lake to the boat landing. Along the way we had Eastern Phoebe, Pine Warbler and a Yellow-throated Vireo. Across the lake was a Great Egret and Great Blue Heron. At the boat landing area we saw Swamp and Song Sparrows, Common Yellowthroat, Yellow Warbler, and a pair of Cedar Waxwings building their nest. From the bridge the crosses the Milwaukee River we saw a Bald Eagle nest to the south, but no adults were present. Here we added Willow Flycatcher but the usual Alder Flycatcher was not present (although a couple were heard elsewhere). Much of the area around Mauthe Lake and especially along the boat landing road have dead Ash trees - from the destructive Emerald Ash Borer. With the lack of leaves from those trees and the insects using those trees, the bird life here has changed dramatically. Hopefully, new species might take advantage (woodpeckers?) and this area again will diversify. 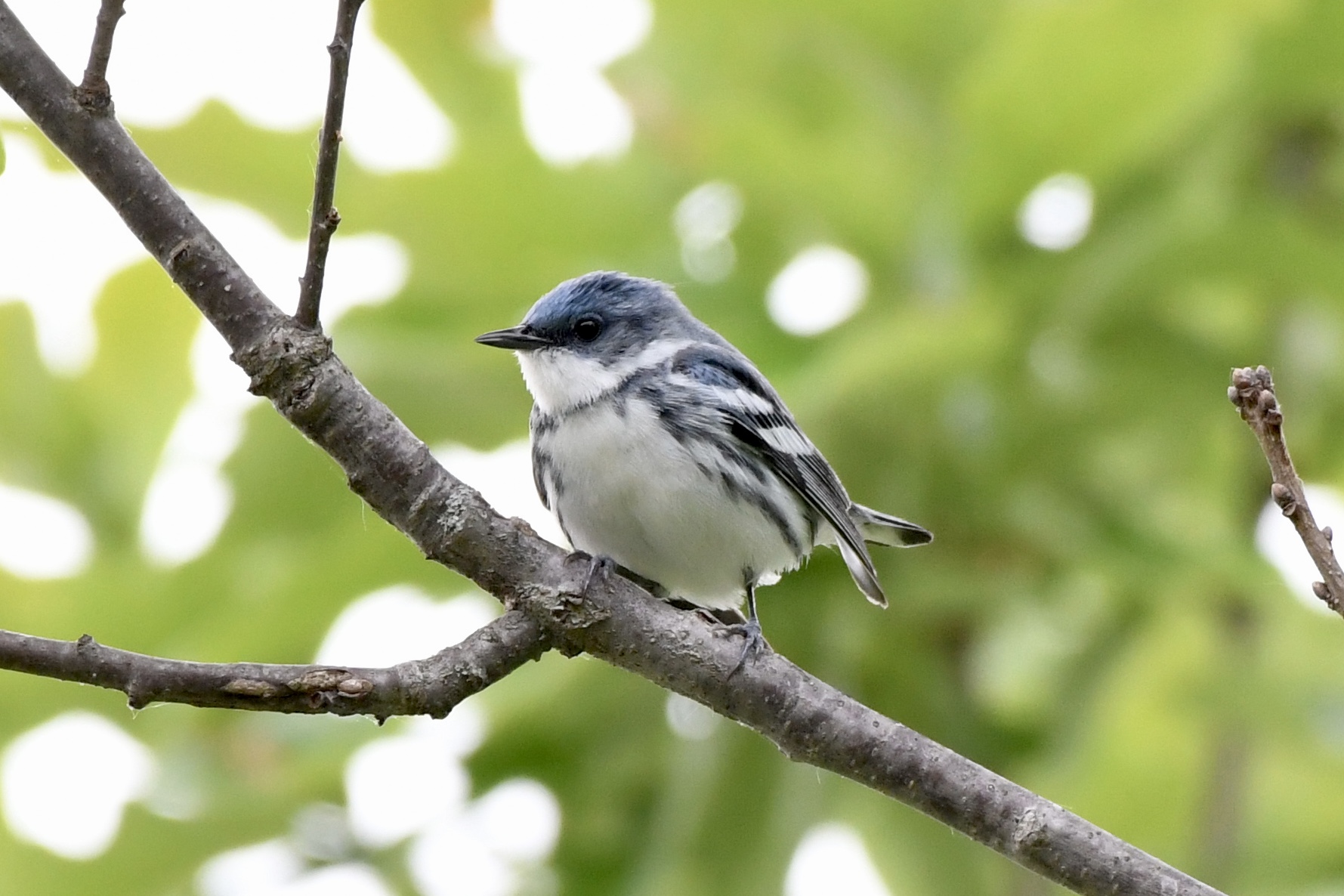 From Mauthe Lake we headed to the little town of Dundee. We made a brief stop at the Dundee Sportsman Club, where just south of the baseball field, the locals have erected a nesting platform for Osprey. Upon arriving we found both adults and at least one chick at the nest. There were also several Cliff Swallows flying around the buildings as well.

Our final stop of the day was at Spruce Lake Bog. Here the flora is often the attraction, especially when you arrive at 12:30 PM. The bird life is less active by now. Although, we did have Wood Duck, Great Egret, Northern Harrier, Belted Kingfisher, Eastern Bluebird, Chipping, Field and Song Sparrows, Northern Waterthrush and Nashville Warbler. But it was the bog plants that were in bloom that had us looking down. Plants like Pink Lady Slippers (moccasin flower), Pitcher Plant, Royal Fern, the floating sedge mat, three-leaved gold-thread, American starflower, partridgeberry, common winterberry, leather-leaf, bog-rosemary, poison sumac and yellow blue-bead lily to name a few. 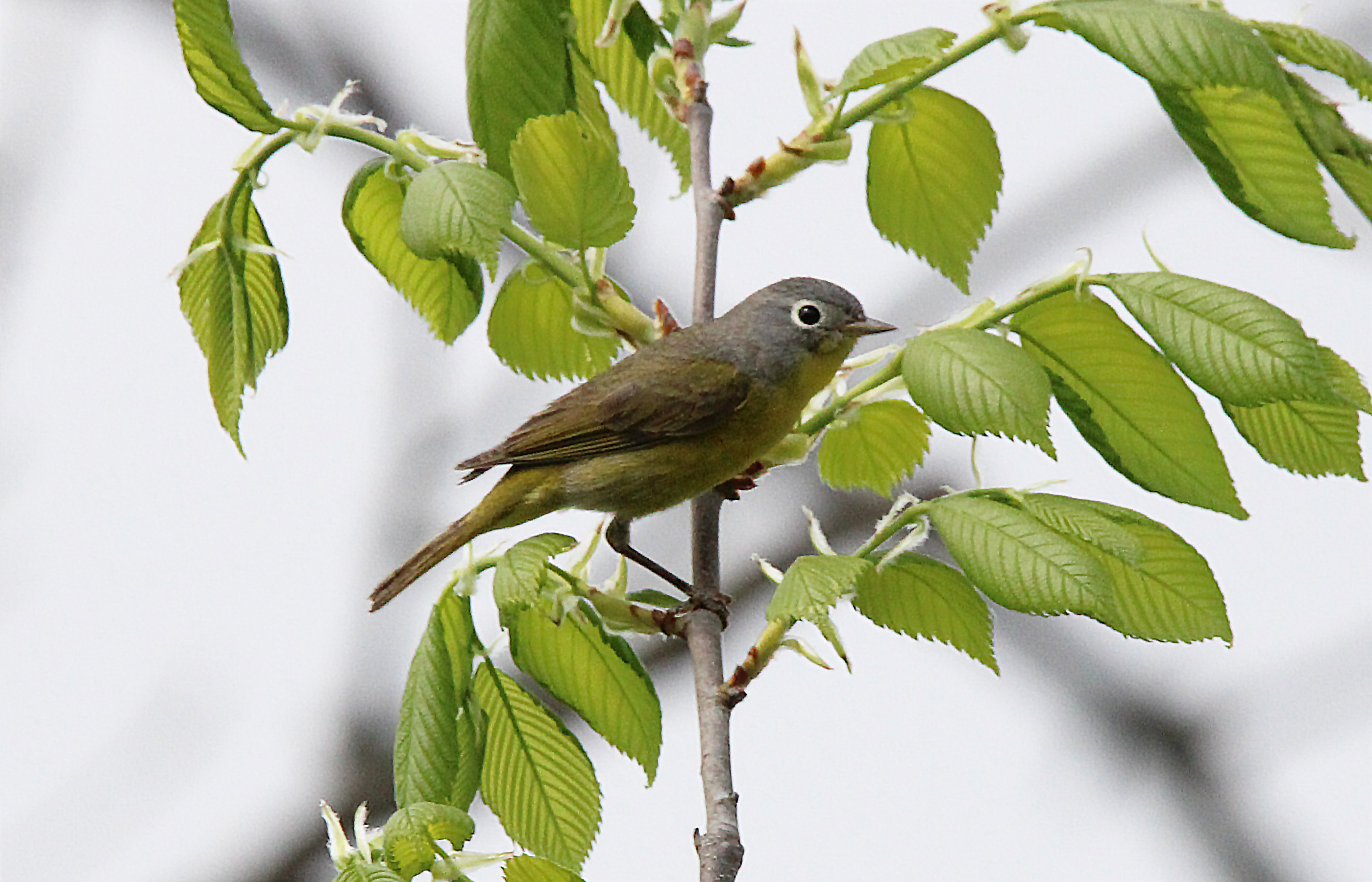 Our trip concluded here at about 1 PM. We had a wonderful group (as always) where we were able to see or hear 88 species for the morning. Here is the link to our day’s

Thanks to all who attended!  It was a pleasure spending a morning with you all.