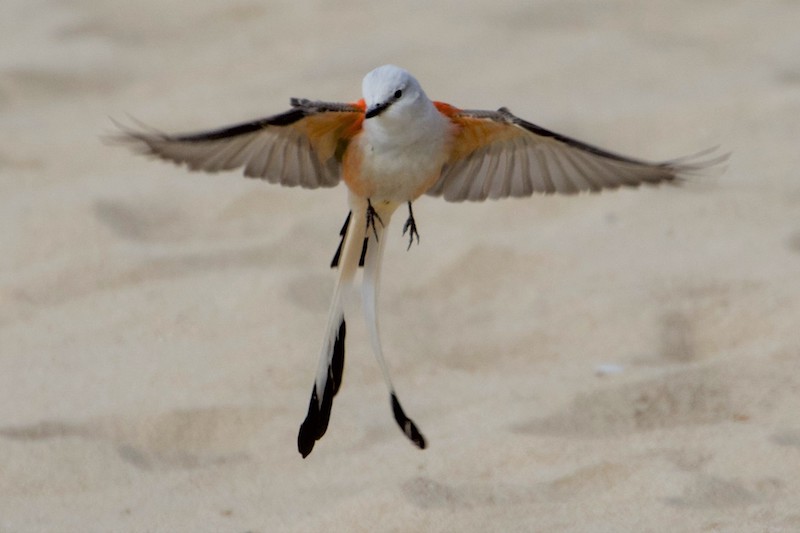 April started out colder and wetter than normal. It rained or snowed on the first 10 days of the month. This cold start delayed migration and made for some slow birding.

The one rare sighting that occurred during the early part of the month was a group of three Black-billed Magpies in Bayfield County. At least two of these birds have been seen consistently and now Have been observed building a nest. Magpie sightings in Wisconsin are usually quite brief, and these birds are notoriously hard to track down. The consistency of these birds has allowed several veteran Wisconsin birders to add the species to their state lists.

A Black-bellied Whistling Duck was found in Winnebago County.
Milwaukee County also hosted some rare birds immediately after passage of the front. A Cattle Egret was a nice find and the same flooded field produced a Marbled Godwit. A small flock of American Avocets was also seen that same day in Milwaukee, and a flock of 30 was seen at South Shore Park in Milwaukee, along with a dozen Willets, on April 25. Avocets also were seen in Racine and Dane Counties.
Earlier in the month, a Chestnut-sided Warbler was seen in Milwaukee. If accepted by the Records Committee, this would be a record early date.
A Lark Sparrow was a nice find in Racine, and another was seen in Milwaukee later in the month.

A White-faced Ibis spent a day in a flooded field in Washington County, and late in the month others were seen in Milwaukee and Brown Counties..  Black-necked Stilts were quite early in Dane County and were also seen quite far north in Brown County where another Marbled Godwit was found.
The month got better when a Garganey, a duck native to Eurasia similar to a teal, was found on Zeloski Marsh in Jefferson County on April 22. If accepted by the WSO Records Committee, it would be just the second state record. The first Wisconsin sighting was at Crex Meadows Wildlife Area near Grantsburg in 2014.
That same day, two Loggerhead Shrikes were found in southern Milwaukee County, and a Yellow-throated Warbler was seen in Greenfield Park in Milwaukee County; that bird continued for at least five days as others showed up in Richland, Columbia and Sauk Counties..
A Sharp-tailed Sandpiper, an Asian shorebird that only joined the state list in 2018, was seen for several days in Sauk County during the last week of the month, attracting attention similar to the Garganey.
Strong and warm southerly winds brought a migrant surge along Lake Michigan and elsewhere the weekend of April 23-24 that was typical of mid-May, with sightings of Prairie, Kentucky and Hooded Warblers in Milwaukee, and Summer Tanagers in Racine, Manitowoc, Winnebago, Dane and Milwaukee Counties.. The ruckus continued into Monday April 25 with some birders along Lake Michigan tallying as many as 17 warbler species. Blackpoll and Kentucky Warbler reports were  record early
The Racine lakefront would produce both Scissor-tailed and Ash-throated Flycatchers early that week. And topping off the week was the discovery of a Long-billed Curlew in Ashland County.