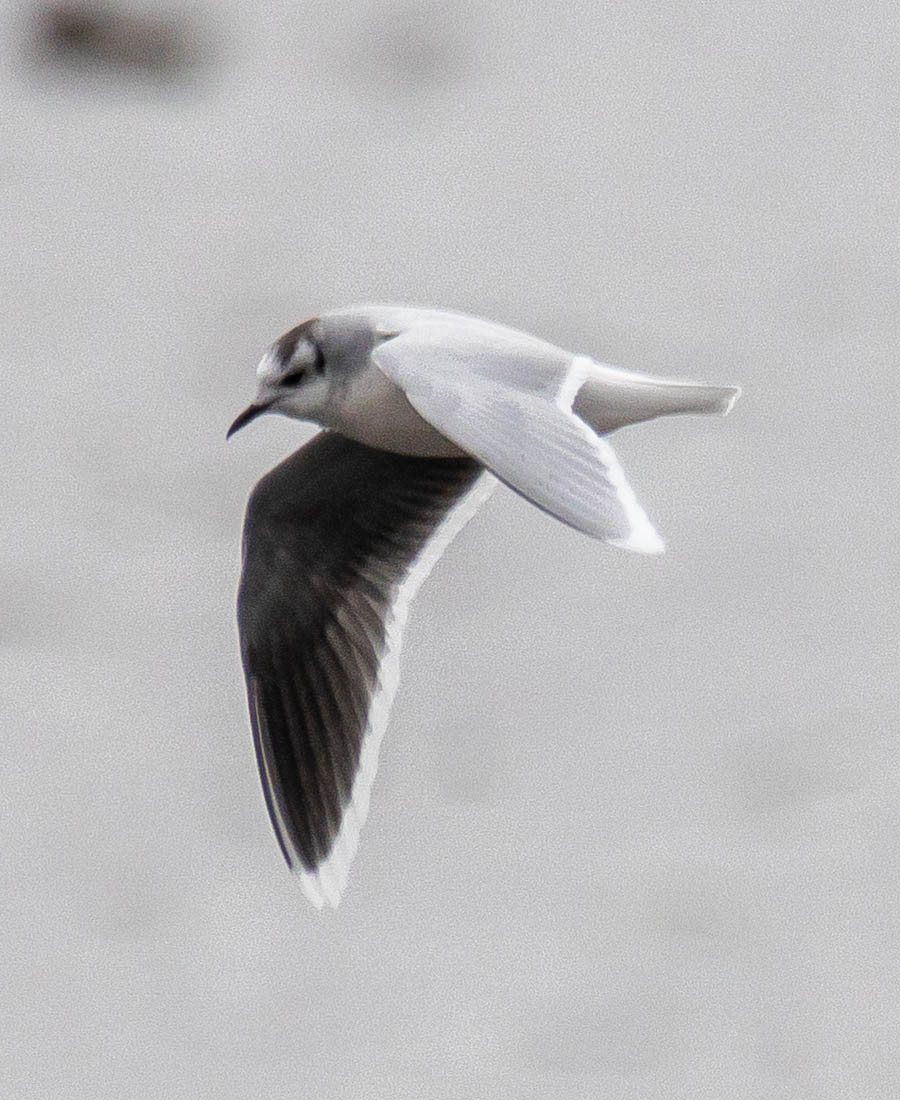 Wow, this field trip felt much more like January than late March!  The temperature all morning under cloudy skies was 23 degrees, which was cold enough, but the strong northwest winds made the wind chills really brutal.  Besides that, there were snow flurries in the air from time to time.

Despite the frigid weather, there were 19 hardy individuals who showed up at Goose Pond Sanctuary at 7:00 AM on Saturday, March 26.  The ponds, which had been entirely thawed during recent warmer weather, had frozen once again.  During most years we’d typically have a nice variety of waterfowl swimming around, but this day we found swans and geese hunkered down on the ice, with many of them with heads tucked in and sleeping.

Along with a large number of TUNDRA SWANS were hundreds of GREATER WHITE-FRONTED GEESE present, along with at least a thousand CANADAS.  Among them we picked out about 30 tiny CACKLING GEESE, and nine similar-sized ROSS’S GEESE – along with a lone SNOW GOOSE.  Also standing among them were a couple dozen each of SANDHILL CRANES and MALLARDS. 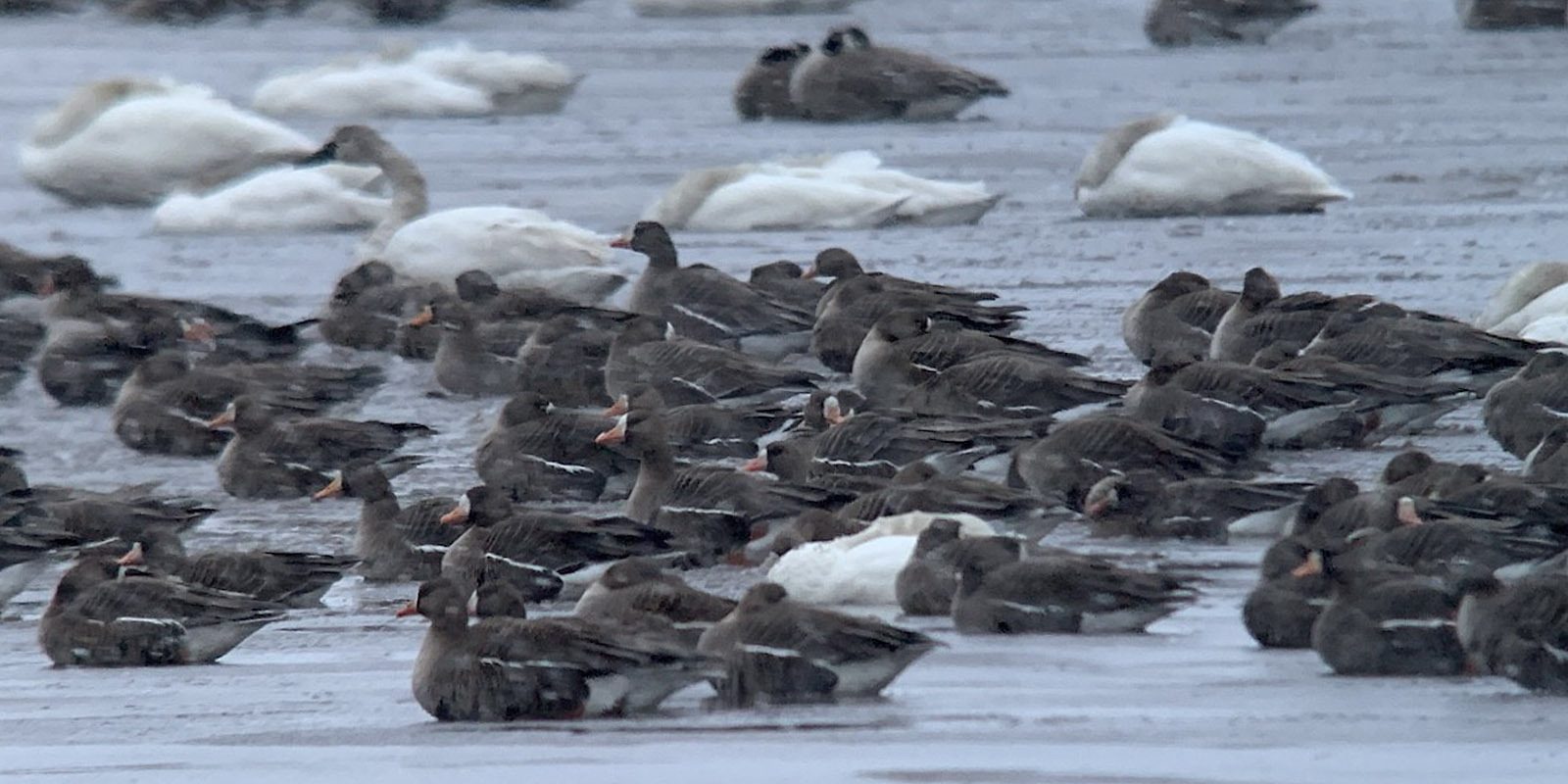 A KILLDEER was present, a NORTHERN HARRIER flew past in the distance, and an EASTERN MEADOWLARK was spotted, but other than a few RED-WINGED BLACKBIRDS and COMMON GRACKLES, that was about it for Goose Pond this year! 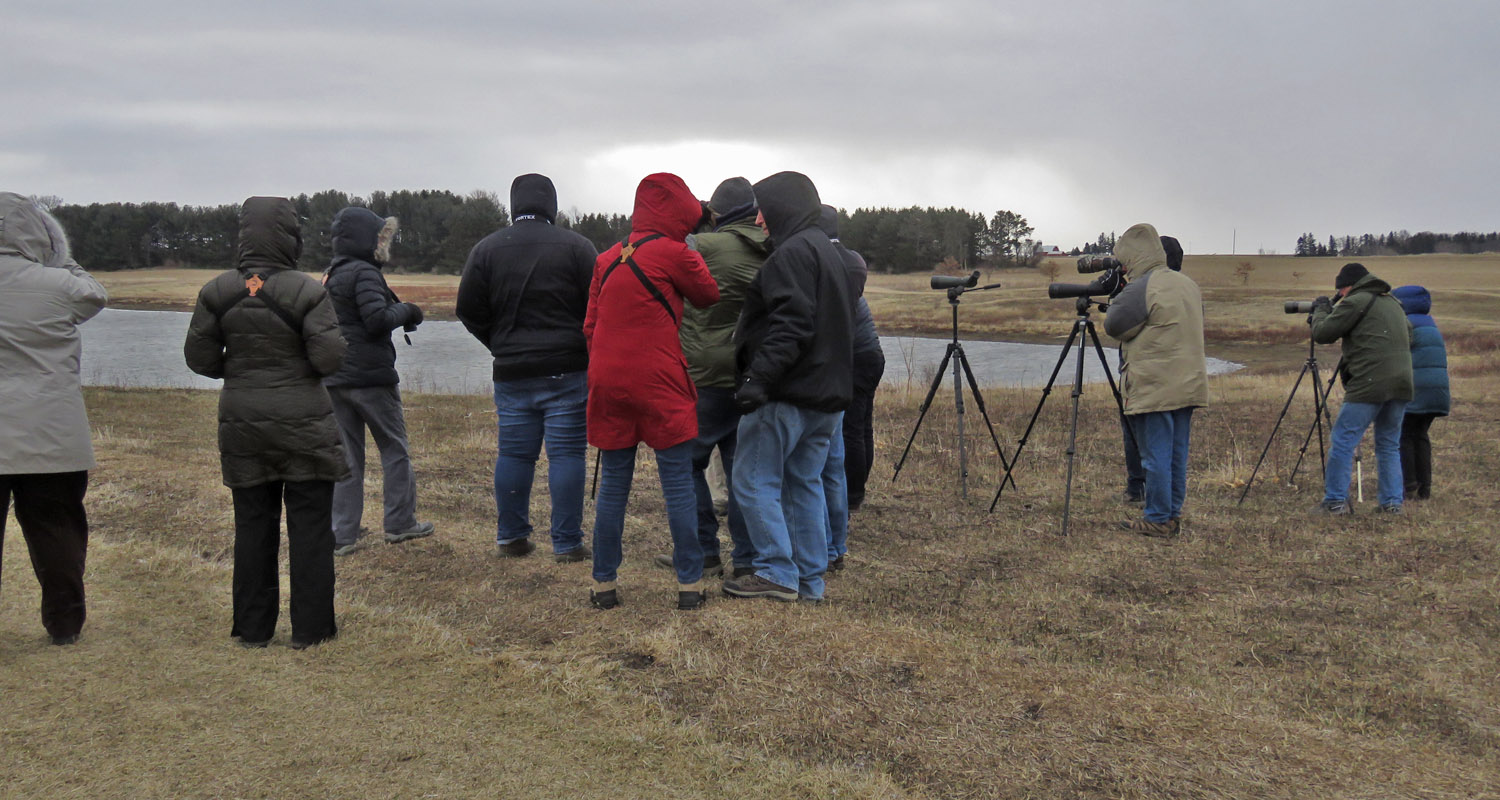 Our next stop was at Schoeneberg Marsh, where again we were greeted with harsh cold and wind chills, but we toughed it out to find a nice variety of ducks – including GREEN-WINGED and BLUE-WINGED TEAL, AMERICAN WIGEON, NORTHERN PINTAIL, AMERICAN BLACK DUCK, RING-NECKED DUCK, and LESSER SCAUP.  Another NORTHERN HARRIER was spotted, along with AMERICAN TREE SPARROW, EUROPEAN STARLING, and a few other species we’d already seen.

Driving along Hwy. DM toward our next area we spotted a nice flock of LAPLAND LONGSPURS as they flew over the road and bounced around toward the north, but unfortunately they didn’t land to give us better looks.  Just down the road at the Hwy. DM & I Ponds we added NORTHERN SHOVELER, CANVASBACK, and REDHEAD, along with BUFFLEHEAD, COMMON GOLDENEYE, and several other species that we had seen previously.

A little further west we pulled up near the Hwy. DM and WIBU Road Ponds and saw more GREATER WHITE-FRONTED and CACKLING GEESE, along with CANADAS and a single TUNDRA SWAN and a few ducks.  On the near edge of the pond we spotted some WILSON’S SNIPE and KILLDEER, and a couple of HORNED LARKS were nearby.

After a restroom and warm-up break at an Exxon Station, we hopped on the I-94 interstate highway and headed north – getting off at the Hwy. CS exit, west of Poynette.  We drove west to Hwy. V and took it just north to the Whalen Grade causeway on Lake Wisconsin.  Our top goal here was finding the LITTLE GULL that had been present the past couple of days, and we were pleased to spot it immediately!  It was initially flying around with several BONAPARTE’S GULLS, but it soon landed on the water and swam around, sometimes next to the BONAPARTE’S and RING-BILLED GULLS, providing nice comparisons.  It also got up and flew around at times, giving us great looks at the distinctive dark-gray underwings, which were bordered by a bold white trailing edge. 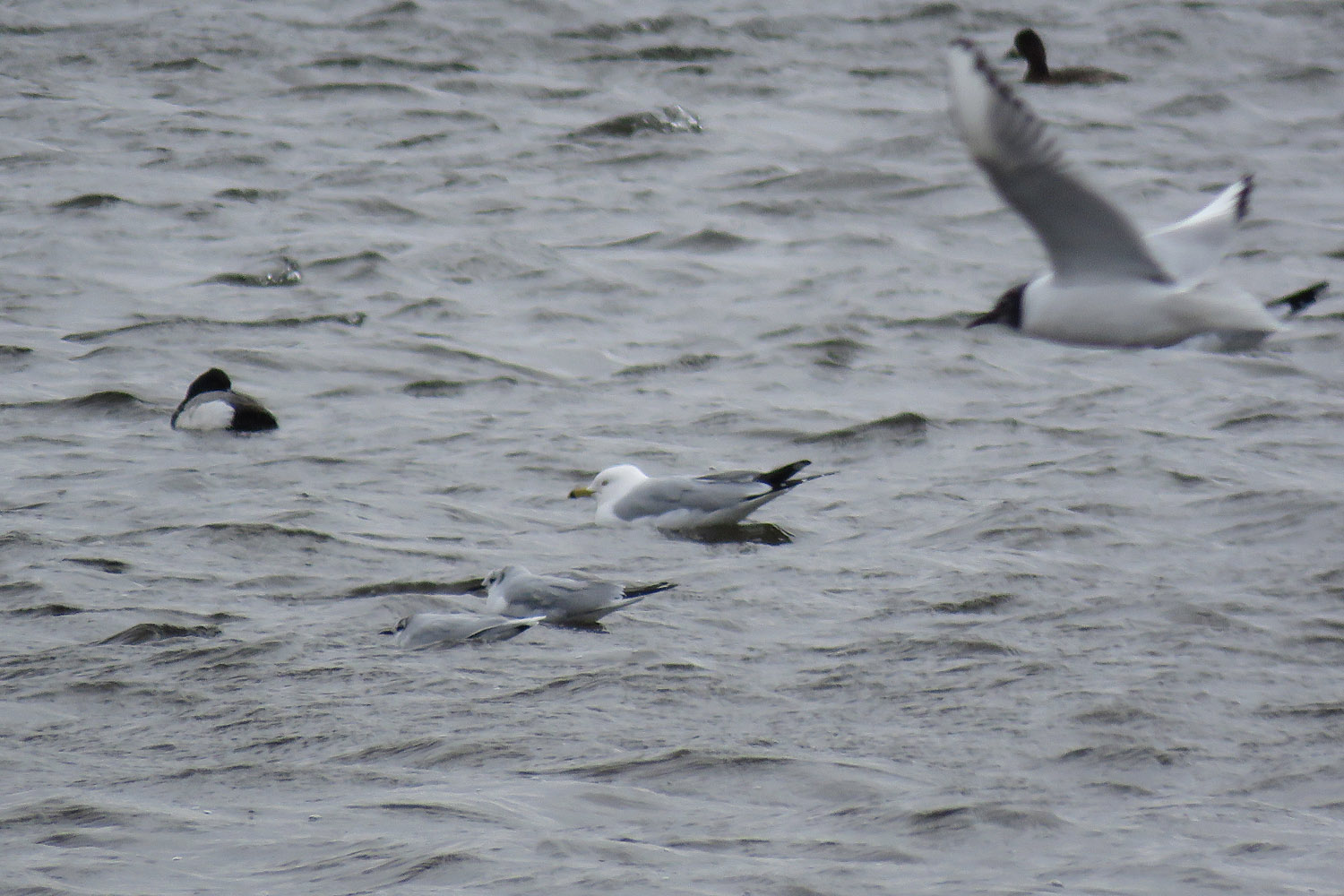 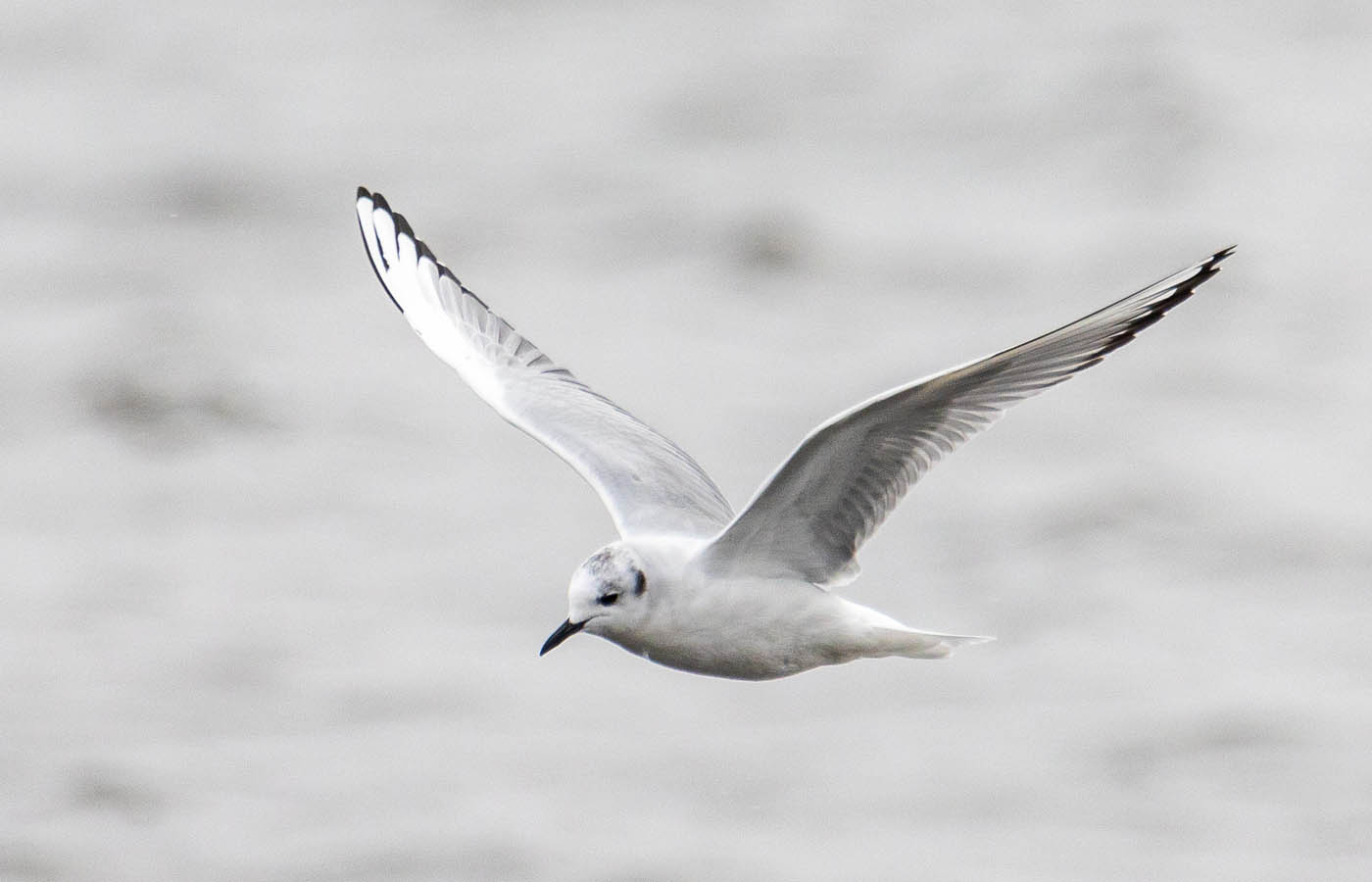 Also present on the water were a nice mixture of waterfowl, including BLUE-WINGED and GREEN-WINGED TEAL, NORTHERN SHOVELER, GADWALL, AMERICAN WIGEON, REDHEAD, RING-NECKED DUCK, BUFFLEHEAD, LESSER SCAUP with a couple of GREATER SCAUP also, and HOODED, COMMON and RED-BREASTED MERGANSERS.  A group of six AMERICAN WHITE PELICANS were also present, as well as another NORTHERN HARRIER.

Our final stop was at a boat landing on Tipperary Point Road, where only a few birds were spotted, but one of them was a COMMON LOON, which steadily dove for periods beneath the waves of Lake Wisconsin.  We called it a day a little before 10:30 AM, with everyone ready to get back into their warm cars and make their way back home.

Thanks to all who attending this early Spring field trip, and to Jeff Baughman for co-leading.  We all look forward to warmer weather ahead!