A Salute to the 2019 BIGBY Birding Champions 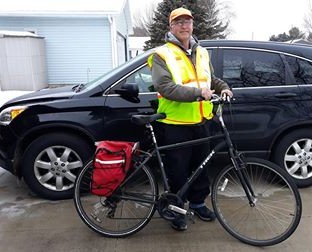 WSO would like to congratulate ALL of Wisconsin’s BIGBY birders for the many MILES they put on their bikes and their feet, and for the birds they found, photographed and eBirded. They can be proud of their accomplishments.

Here are the 2019 Champion BIGBY birders and their stories:

Our 2019 FIRST PLACE CHAMPION is Steve Thiessen from Stoughton in Dane County. He biked 728 miles and an additional 46 miles on foot for a total of 774 miles to see 210 bird species.

“Although I got out on the bike quite a bit this year, I really didn’t finish strong. I had hopes of beating my best BIGBY year, but our wintery November got my biking off track. It seemed all the good stuff was up in McFarland and the wind, ice, snow and fog were all good excuses not to go. I may have finished with the highest total, but that was totally by default. Emily moved, Scott, Wendy and Tom were atlasing and Ross was recouping.

“I’m based in Stoughton and anything around 20 miles is a big trip for me. In spring all the hot birds were in the Oregon area. Seemed like I would just get home and something new would pop up. That did get me in better shape! I stop BIGBY biking in the summer until shorebird migration starts back up. We could all use more shorebirds on our lists!

“Some of my highlight birds were Eared Grebe, Snowy Egret, Red-shouldered Hawk, Buff-breasted Sandpiper, Red-necked Phalarope, Bell’s Vireo, Nelson’s and Le Conte’s Sparrows and Yellow-headed Blackbird. It really helps to have other birders who live close by (like Kris Perlberg) who will give you a call. I also really enjoy meeting and talking to other birders along the trails.”

SECOND PLACE goes to Emily Weiser who lived in the Onalaska/LaCrosse area most of the year, but has since moved to Alaska. She biked 798 miles and did another 15 miles on foot for a total of 813 miles to see 205 bird species. 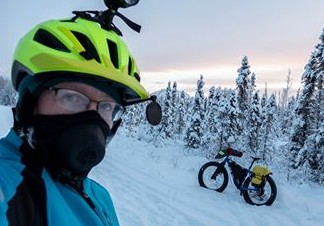 “2019 was another great year (or actually half-year) of green birding from my home in Onalaska (La Crosse County). Last year I focused on finding as many species as I could by bike, so this year I decided to slow down a little. I focused more on my 5 Mile Radius (5MR) birding patch and had fun seeking out birds that might be easy to find elsewhere in the county, but were more difficult closer to home.

“ I biked a Green Big Day within my 5MR in May, and was shocked that I was able to find 124 species that day - one more than the previous year, when I did not restrict myself to my 5MR! I'd hit peak spring migration on that day and the total included 23 warblers, which is good for La Crosse County. I also really enjoyed biking to the WSO Convention in Eau Claire and finally meeting many of you there! Helping finish off the Wisconsin Breeding Bird Atlas was another of my primary goals for the year, and I was able to finish my block in Buffalo County (primarily by bike) as well as helping out with a few confirmations around La Crosse and Trempealeau. I made a point to make the most of my last spring migration in Wisconsin, as I moved to Anchorage later in the summer. I'm enjoying exploring my new area and birds by bike (including a new fat-tire bike that's wonderful on the winter bike trails, as pictured), but warbler migration just won't be the same!”

THIRD PLACE goes to another dedicated BIGBY birder, Scott Baughman who lives in Waupun, not far from Horicon Marsh. Scott biked 331 miles and put in another 17 miles on foot for a total of 348 miles to see 196 bird species. 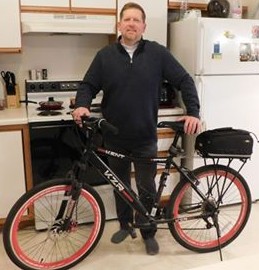 “Well, this year was a bit frustrating for me and my BIGBY adventures. Due to work obligations I was out of the state from April 14 thru May 30—which is prime migration through Wisconsin. Therefore, I did not see a single warbler in Wisconsin until getting a Black-and-White and an Ovenbird on May 3! Luckily, I had a couple nice days of fall migration to fill in my list of passerines.

“I didn't have nearly as many biking miles either. I had glaring holes in the sandpiper and gull families. I usually take a trip to Sheboygan in May but that didn't happen. Well, maybe next year! Congratulations to Steve for a job well done. Good luck in 2020. I'm very anxious to see what kind of numbers Emily can attain with a whole year in Alaska, WOW!! Thanks Wendy Schultz for being our BIGBY "Mom". Hope to see all of you out birding on the bike trails in 2020 and maybe even at the WSO Convention in Two Rivers!”

On behalf of WSO, we hope to see more of you on the list! Contact us at bigby@wsobirds.org for more information. (By the way, I now have a co-chair—Scott Baughman! You’ll hear more from him as the birds return!)