Port Washington -- William Mueller, director of the Western Great Lakes Bird and Bat Observatory, is retiring after nearly a decade of service.

Present at every moment of the Observatory’s young life and the author of many of its proudest accomplishments, Mueller plans to retire Oct. 15.

Mueller was tapped in 2010 to help implement the dream of the Observatory founder, the late Dr. Noel Cutright, of converting the Squires Golf Course near Port Washington into a preserve for migratory birds and turning its clubhouse into the Observatory's headquarters. Converting the golf course into a preserve was a project of the Ozaukee Washington Land Trust. Cutright, one of the state's leading ornithologists, died in 2013, and Mueller succeeded him.

Under Mueller’s leadership, Forest Beach Migratory Preserve has become the site of scientific meetings, a hawk watch, annual celebrations of World Migratory Bird Day, and butterfly workshops, and the Observatory has grown into a respected independent non-profit research, education and conservation advocacy organization.

Mueller has coordinated the Observatory’s Waterbird Watch at Harrington Beach State Park since 2012 and overseen the growth of the Southeastern Wisconsin Conservation Summit, a popular two-day scientific conference held each year in early November. He has served on the steering committees of both the Midwest Migration Network, founded in 2014, and the second Wisconsin Breeding Bird Atlas, where since 2015 he has led statewide training efforts that helped recruit more than 1,900 volunteers for five years of field work.

Mueller also has been the driving force behind the creation of a network of Motus migration monitoring towers in Wisconsin. A Motus station is now up and running at Forest Beach Migratory Preserve, and by summer’s end, additional stations will be in place in Manitowoc, Waukesha and Grant counties and at the Milwaukee Zoo. Two additional stations will be constructed in Columbia and Iowa counties, and many more are in the planning stage.

All of these important and successful projects and others will continue after Mueller’s retirement, said Board Chair Charles Hagner. “Just as Bill so ably fulfilled Noel’s wishes,” Hagner said, “we will find a new science director who will be able to pick up right where Bill lets off.”

The Observatory will start searching for a new science director immediately. Details about the position are available on the Observatory website. The Western Great Lakes Bird and Bat Observatory, Inc. (https://wglbbo.org), is an independent 501(c)(3) organization. It was founded in 2010 as a program of the Ozaukee Washington Land Trust. Its mission is to conduct coordinated research, monitoring, and education that advances the conservation of birds and bats in Wisconsin and throughout the western Great Lakes region.

The Observatory’s headquarters is at Forest Beach Migratory Preserve, located near the Lake Michigan shoreline north of Port Washington. 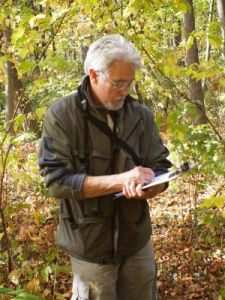 --This is one of several timely articles in this month's Badger Birder newsletter; don't miss out onthe latest birding and conservation news. Become a WSO member today! https://wsobirds.org/support/become-a-member--