The month of January begin with mild conditions and no snow. Milwaukee had a record high of 54 degrees on the 5th. These warm conditions continued until the middle of the month before much of the state was blanketed by snow and the polar vortex moved in and dropped temperatures well below zero. Temperatures during the month’s final few days were expected to approach record lows.

The mild temperatures early in the month allowed several species to stay later than normal. providing the bulk of January’s unusual sightings:
-- The Hammond's Flycatcher in Sauk County lingered into the new year as it was last seen on New Year's Day.
-- Dane County hosted several species not typically found in January. A Great Egret was an unexpected find there along with a Common Yellowthroat that was still seen in mid-January.
-- Ross's and Greater White-fronted Geese were also found in Dane County.
-- Hardy Gray Catbirds were found in both Dane and Milwaukee counties.
-- A Rose-breasted Grosbeak was visiting a feeder in Taylor County.
-- An Eau Claire County feeder hosted a Harris's Sparrow.
-- A male Baltimore Oriole provided a splash of color in a snowy Walworth County yard.
-- A late Western Meadowlark was seen in Kewaunee County.
More typical for the season:
-- A Varied Thrush frequented a yard with feeders in Waushara County.
-- The Townsend's Solitaires continued in Brown County.
-- The female Harlequin Duck continued in Sheboygan.
-- A Black-billed Magpie was seen briefly in Douglas County. This species is seen almost every winter in northwestern Wisconsin but sightings are scattered and infrequent.
-- A female Barrow's Goldeneye was photographed in Kewaunee County. This species has become much harder to find over the last few years.
-- A few reports of King Eiders came in from the Algoma harbor as well, but these birds could not be relocated despite much effort.

It was fairly quiet for winter finches. A few nice groups of Pine and Evening Grosbeaks were seen at scattered locations in the northern third of the state. Large flocks of Bohemian Waxwings were found up north as well.

A few scattered reports of Snowy Owls continued to trickle in from several locations. As of Jan. 1, about 85 owls had been reported, according to the WDNR’s Ryan Brady. Quite a few less than last season’s 218, yet better than the 38 of 2016-‘17. This year's is an “echo” flight and consists of many second-winter birds (last winter's juveniles).

Amid the record cold, the increased daylight has many of us longing for spring and the return of the dawn chorus. 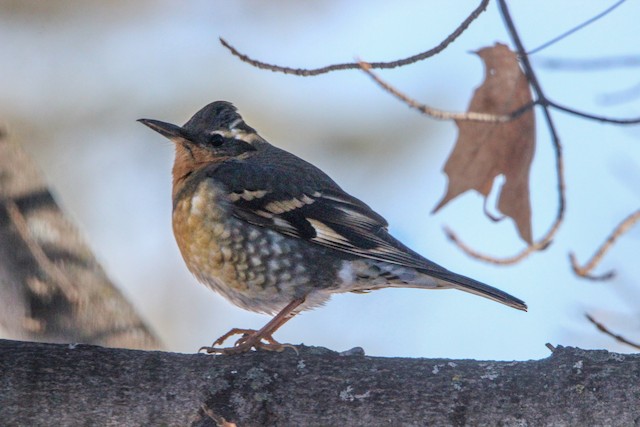 This Varied Thrush was found near Wild Rose in Waushara County from Jan. 5 through at least Jan. 25. Photo by Emily Weber.