The temperatures statewide were mainly below normal during November and several small snowfalls occurred. The first major storm of the season clipped the southeast corner of the state on the weekend after Thanksgiving. Up to 10 inches of snow fell in Kenosha County. Perhaps due to this colder weather, the birding was a bit slower than normal.

November is often the best month of the year to find rare birds. The most unusual sighting this year was a frigatebird seen flying over Dane County. This is an outstanding rarity, especially so late in the year and not immediately following a tropical storm. Distant photos were obtained but were not clear enough to identify it to species.

The Rufous Hummingbird continued at a feeder in Fond du Lac and another was seen in Milwaukee County. The bird in Fox Point was banded and remained long enough to be enjoyed by several other birders.

A Varied Thrush was an unfortunate victim of a window collision in Dane County. Another Varied Thrush visited a feeder in Lincoln County but was only seen for one day. A Townsend's Solitaire was found in Brown County near the location where one overwintered last year.

Winter finches are beginning to move into the state. Pine and Evening Grosbeaks were reported from Door County along with a few redpolls. A large flock of Bohemian Waxwings was seen in Oneida County.

At least 27 Snowy Owls were reported around the state. One bird remained for a few days in Sheboygan. Sheboygan continued to host a Harlequin Duck and an Eared Grebe. A Purple Sandpiper was photographed in Manitowoc.

It's almost time for the Christmas Bird Counts to begin and the increased birding activity will hopefully turn up some more rarities. 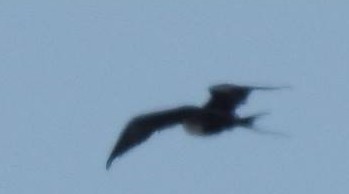 Kathryn Kingsbury posted this photo to the Wild Birds of Wisconsin Facebook page on Nov. 9 and had many birders in Dane County looking to the skies, hoping to add this frigatebird to their state list.