Perhaps some of you who have been members of WSO for a long time will remember that for many years we offered an annual Fall Campout at WSO’s Honey Creek Preserve. The last time we held this event was 2000, so it’s been a while. The outing probably was dropped, in part, due to the success of what is now annual late-September Jaegerfest weekend in Superior, started in 1999.

In years past, this was a two-night campout – but for 2018 it will be just one night. Depending on feedback, we might consider going to two nights in future years.

So join us on Saturday, Sept. 29 for the return of WSO’s fall campout, reviving a broader field trip tradition that dates back some 66 years.

Campers should meet at 6 p.m. at the Cox Nature Center on WSO’s Harold and Carla Kruse Honey Creek Nature Preserve west of Prairie du Sac in the Baraboo Hills of Sauk County. You are certainly welcome to arrive earlier. Tents or campers are welcome, and you should plan to bring your own food and beverages for the weekend. (Potable water and toilet facilities are available.) 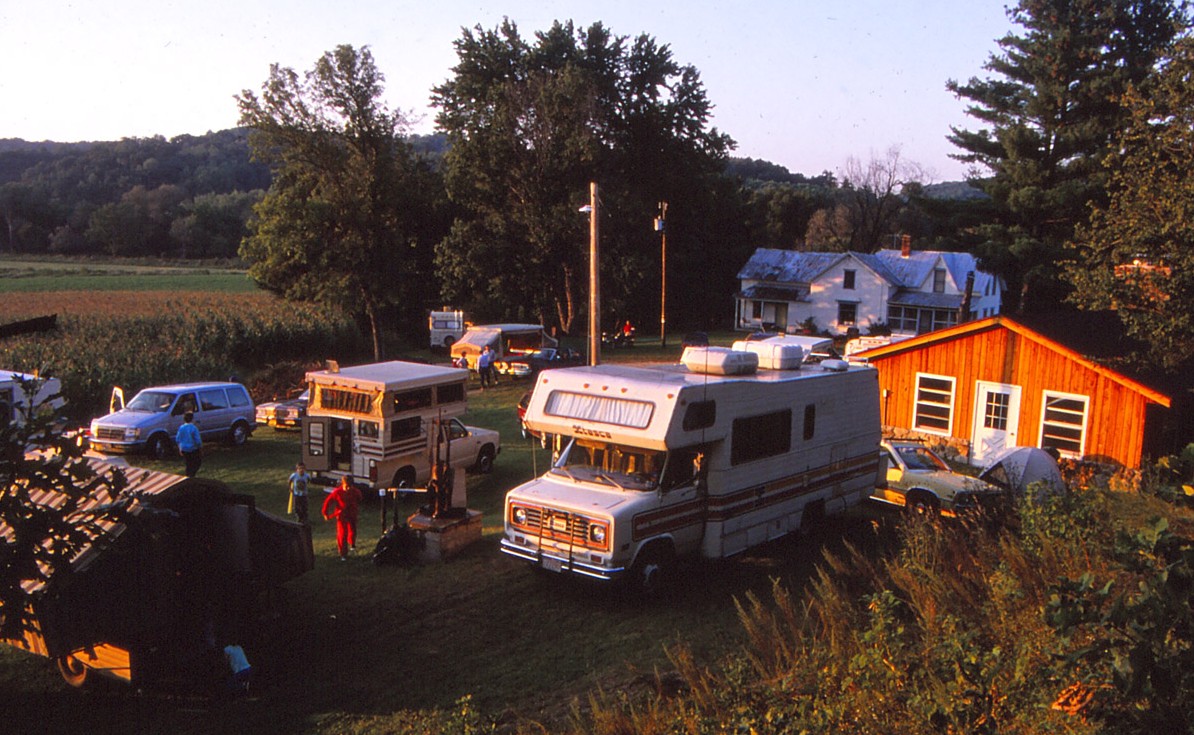 Photo by Tom Schultz. The lawn around the Cox Nature Center was nearly full for the 1989 fall campout at Honey Creek.

On Saturday evening (weather permitting), we plan to take a hike to listen for night sounds. On Sunday (probably starting at 7 a.m.), we plan to offer one or two field trips (depending on attendance)--one going up the Honey Creek Valley and the other to explore our newly-acquired 105-acre Dischler Addition.

If time allows we also may visit nearby locations such as Ferry Bluff and likely will conclude the event in the late afternoon or early evening. (See calendar on Page 20 for further details and directions.)

A review of WSO’s annual meeting reports and archives shows that the Society’s first special field trips were launched in 1949, and in the early 1950s widespread interest in camping led to the launch of campout field trips. In the 1960s and 1970s there were as many as three held annually: spring, summer and fall.

Their popularity can be seen in the fact that in 1960, some 71 birders showed up for a September campout in the Southern Kettle Moraine.

After WSO’s acquisition of the Honey Creek property in the early 1960s, the preserve became a popular destination. The 1972 fall campout included dedication of the David J. Cox Memorial Nature Center (and shelter).

The spring/summer campouts appear to have evolved into regular and extensive participation in the Nicolet Breeding Bird Survey each June.