The Future of Birding: Chapter 1 of Our Report on WSO’s Strategic Planning Survey

Late last fall the Wisconsin Society for Ornithology embarked on a strategic planning effort to better identify the needs of its members as well as those of other birders in the area. To gather information on what birders would like to see done to increase their birding enjoyment, surveys were developed to get at the question of what benefits WSO can provide to make birding more personal.

Birders have as many reasons for birding as there are bird species. There always have been many different organizations and avenues to accommodate this diversity, and the explosion of social media has greatly expanded birders’ communication capabilities. Wisbirdn, the Wisconsin Birding Network on Facebook, Wisconsin eBird, and local bird club email lists all have given birders ample new ways to interact.

What’s been missing is a data-driven effort to fulfill the desires of birders themselves. That’s why WSO set out in November (with the help of Survey Monkey) to survey its members and, separately, a range of birders in the state who don’t belong to WSO. Now the Strategic Planning Committee, led by DNR conservation biologist and former WSO President Randy Hoffman, has begun its analysis of those responses. The committee was thrilled by the survey response rate. Our member survey drew 259 responses from among our roughly 1,100 members, far exceeding the 10-15% response rate that most surveys hope to achieve. We also found some additional WSO members among the 112 responses to a separate non-member survey distributed via Wisbirdn, Facebook, eBird and several local birding groups.

This is the first of four reports on the survey results that will appear monthly in the Badger Birder and on our web site, www.wsobirds.org , leading up to the annual WSO convention in Ashland May 23-26, where it will be discussed at the organization’s annual business meeting. The complete survey is on the web site to let folks see results in detail, draw their own conclusions and offer WSO leaders additional feedback. wsobirds.org/survey

The committee met on Jan. 4 and, at the suggestion of WSO historian and former president Noel Cutright, began its discussion with each member listing their top take-home-messages from the survey results. There was considerable agreement and overlap, and these seven points stood out.

Because the strategic planning committee includes three of the five current WSO officers and intends to be in close touch with entire WSO board, there is an expectation that it will move quickly to implement member feedback in some areas where there is strong consensus. Creation of a Communications Committee, upgrades to the WSO web site and launch of a WSO Facebook page are just a few such examples where feedback already is having an impact. The committee also is discussing options for expanding activities for members in parts of the state where our membership-density is lower, and the Ashland convention is one effort in this area. Other initiatives, including any that would involve structural changes, will require longer and broader discussion, with May 2014 envisioned as the final implementation date.

Here is a quick look at what else we have gleaned from the first six questions in the member survey:

In March, we’ll examine the non-WSO-member survey feedback, and in April we’ll take an in-depth look at what members had to say about The Passenger Pigeon and the Badger Birder, as well as where else they go for their birding information. And in May we will examine the rest of the survey, focusing more on what changes members want to see in their Society, leading up to the annual meeting at the Ashland convention.

For a look at the complete membership survey, including charts displaying some of the results, go to wsobirds.org/survey 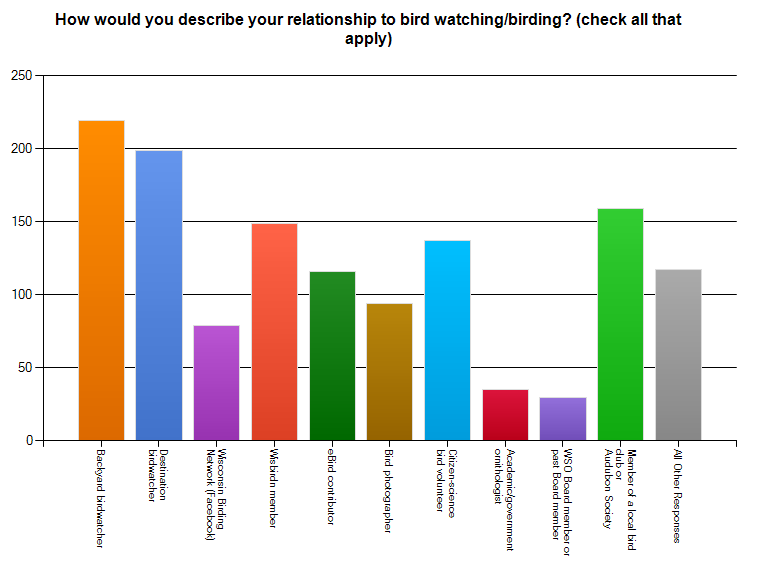 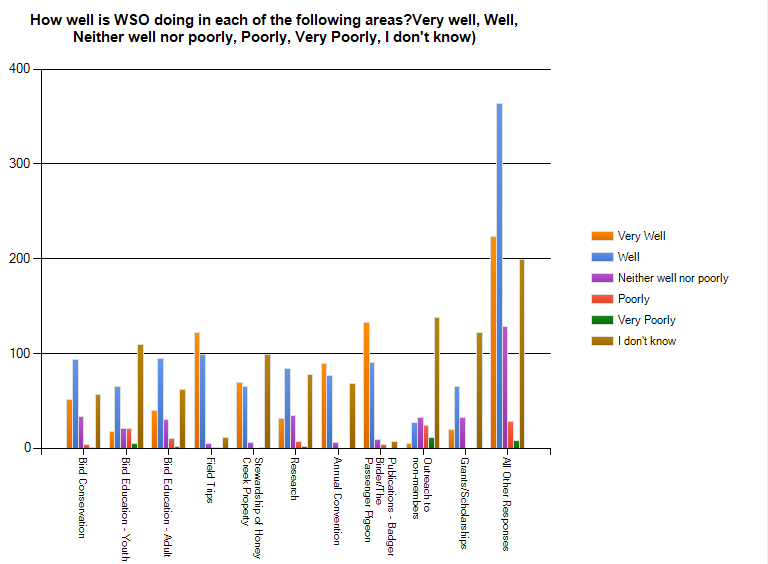