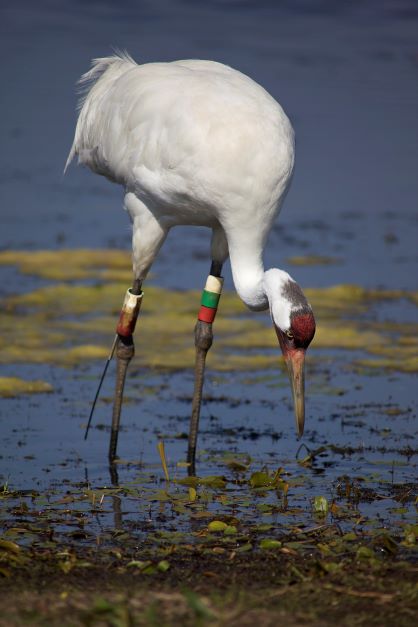 As the temperatures get colder and the days become shorter, Wisconsin skies will be filled with the bugling calls of Sandhill Cranes and Whooping Cranes on their migration south for the winter. Seeing a Whooping Crane or a Sandhill Crane in Wisconsin is incredibly exciting and a sign of conservation at work. 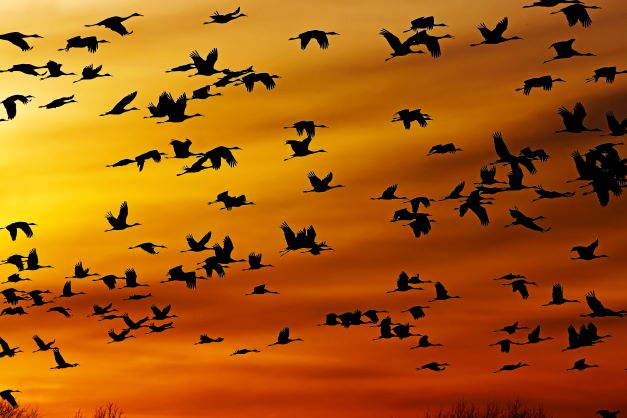 Photo by Tom Ford  Few scenes are as dramatic as a flock of cranes migrating through Wisconsin against a fall sky.

The Sandhill Crane is a four-foot-tall slate gray to reddish brown long-legged wading bird with a red patch on its head. In preparation for migration, Sandhill Cranes gather in massive flocks on staging grounds to rest and eat. Within these flocks, you may catch a glimpse of a family of Whooping Cranes.

Migratory movement for cranes began in mid-October, will peak in November and likely conclude in mid-December. While cranes are on the move in Wisconsin, we ask that you keep your eyes on the skies and report your sightings of banded cranes to the International Crane Foundation. Reports of banded cranes provide scientists with valuable information about habitat use, migration patterns, flock formations and associations, survival of migrating cranes, and more!

When observing cranes, we first ask that you remember these crane-safe behaviors:
-- Stay 200 yards away from cranes
-- Observe their behaviors – head up and wings back means take a step back
-- Stay on the trails or remain in your vehicle when observing cranes
-- Respect private property
-- Report poaching or harassment to 1-800-TIP-WDNR
-- Look for bands on the crane’s legs and report your sightings to bandedcranes.org 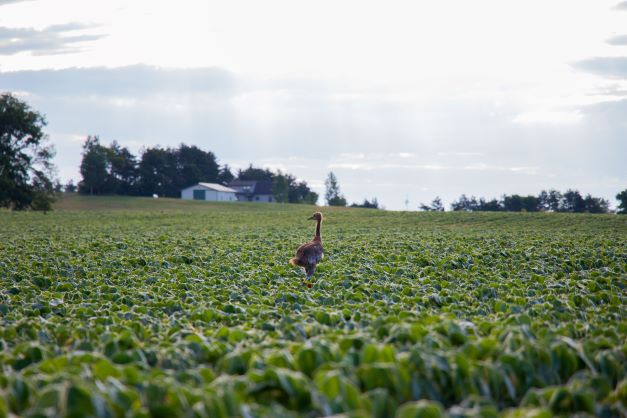 When reporting banded cranes, you will be asked to share the crane’s location and habitat, the time of your observation, the species and number of cranes observed, pictures taken to aid in identification, and the crane’s bands. It is important to note that even incomplete records of band combinations may be valuable as they can help scientists narrow down which cranes were sighted.

Finally, when reporting bands of cranes, please report one leg at a time and start by identifying the leg (right or left) and read off the bands from top to bottom. For example, the Whooping Crane pictured here would be reported as right: white red and left: white green red.

Reporting your sightings of banded birds is a great way to get involved in conservation in Wisconsin. The International Crane Foundation depends on sightings from citizen scientists like you to monitor Whooping Cranes and Sandhill Cranes and learn more about the health of these populations and the success of the Whooping Crane reintroduction.