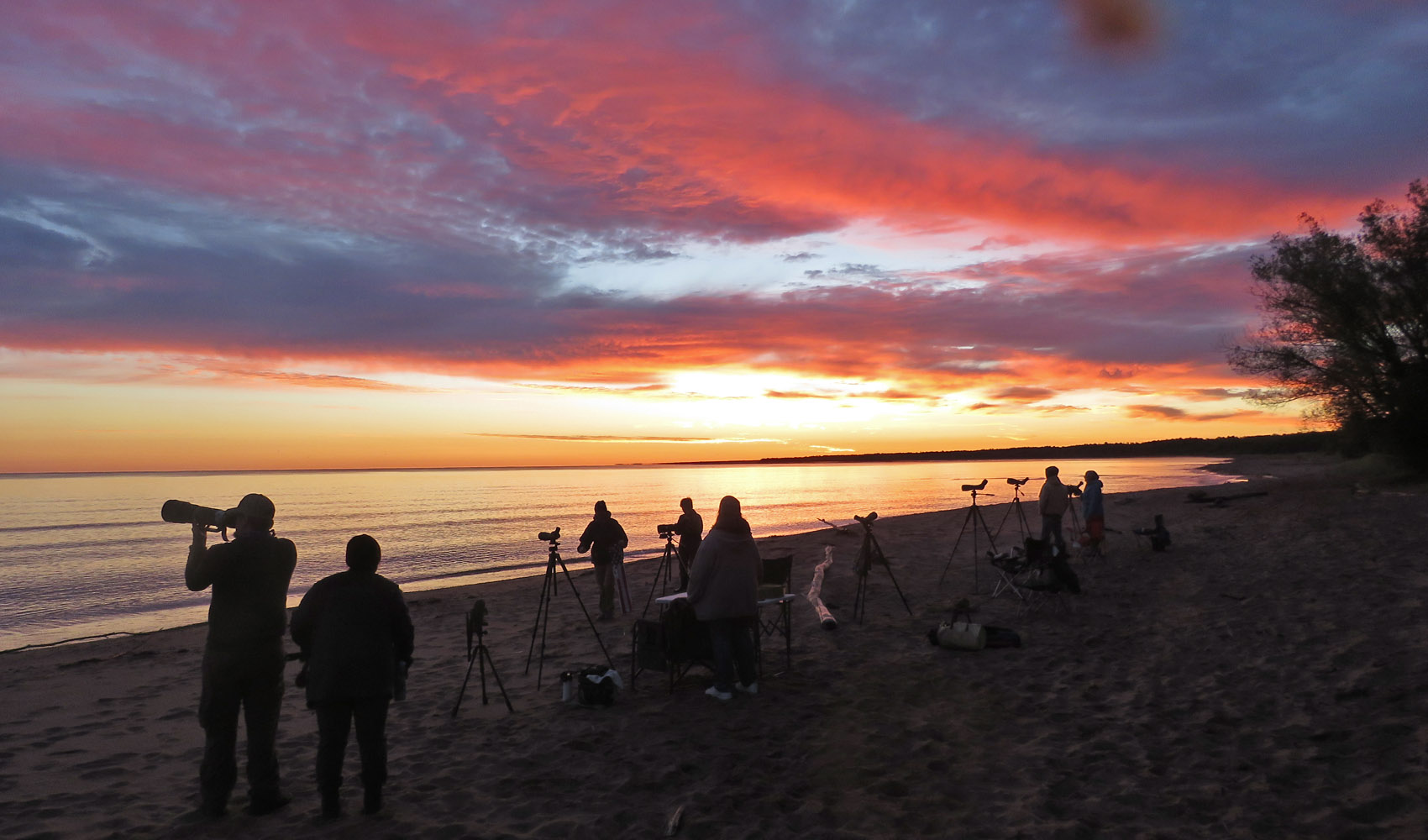 This was another “unofficial” Jaegerfest weekend for WSO, but many members attended – as we have annually since we started this field trip to Wisconsin Point in 1999 – so this was the event’s 24th year!

This report begins on Thursday Sept. 22, since that day provided the back story for this year’s jaeger activity on Lake Superior for the scheduled Friday through Sunday Jaegerfest. On the preceding days, birders had been seeing several jaegers – primarily adults (or sub-adults) – so it wasn’t surprising to see them on Thursday morning. What was odd, however, was that these Parasitic Jaegers didn’t seem to be chasing gulls but instead were flying together in a loose group. We were often seeing as many as five (often within a single scope view) over about an hour.

Around 8:15 we watched as they got up fairly high and began flying south, disappearing behind the trees, and we didn’t see them after that. It appeared that they were migrating, and we didn’t see another jaeger on Wisconsin Point for the next two days! 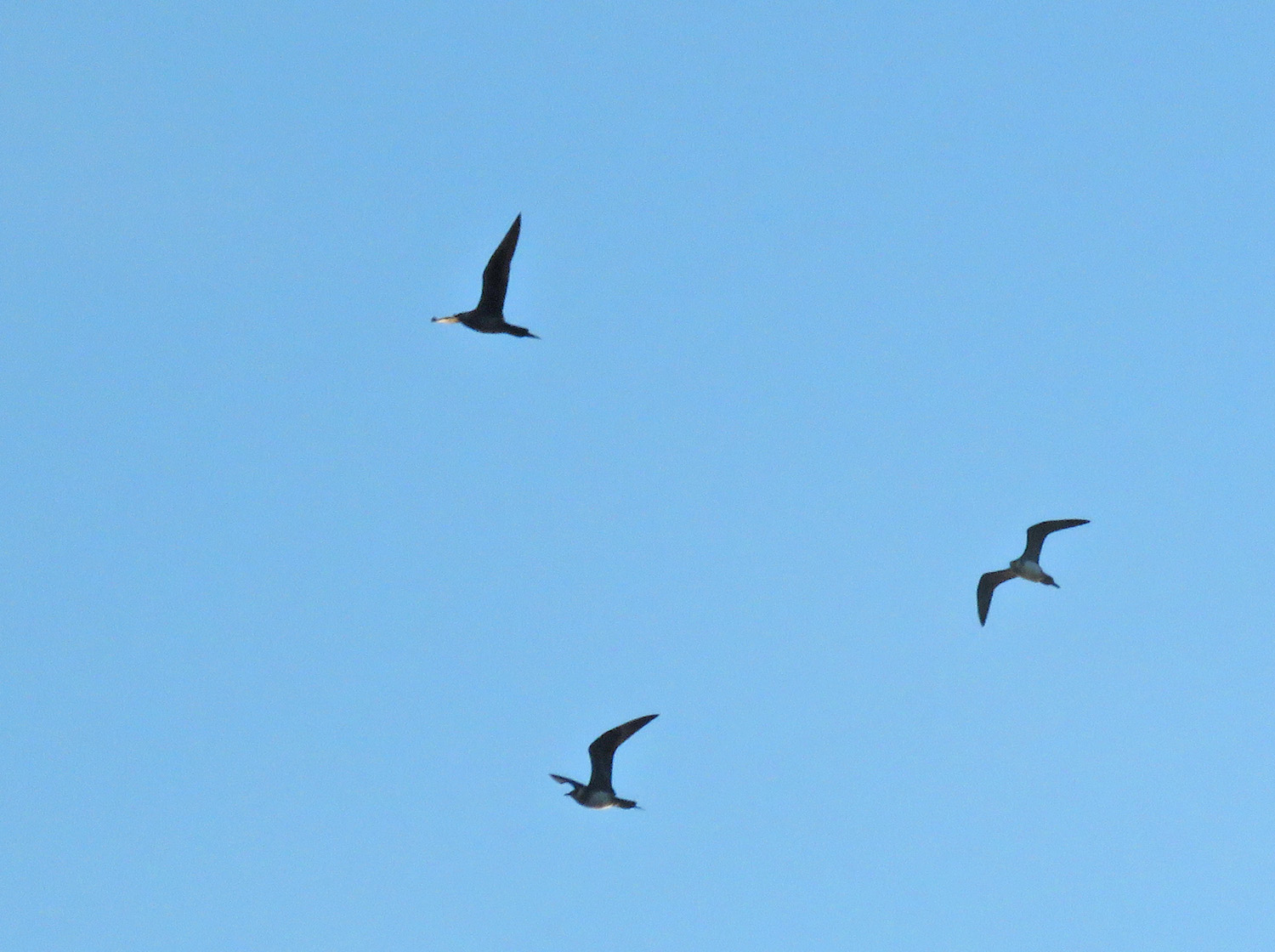 Friday (Sept. 23) was partly cloudy in Superior as we began arriving at the Point around 6:30 a.m. Dawn was fairly spectacular as the sun rose against an orange sky and reflecting across the nearly flat water of Lake Superior. The wind was from the south, and fairly light at 5 to 15 m.p.h. Initially all we were seeing were Ring-billed and Herring Gulls, with an occasional Bald Eagle flying by. A little after 7, a Bonaparte’s Gull was found swimming among the other gulls.

A few minutes later there was great excitement as a Sabine’s Gull was spotted flying in, soon followed by a second individual! They landed on the water and swam about for a while, but then they took off with the other gulls and flew closer to us. We had really great looks at these small gulls and their striking wing patterns as they flew about, and one of them passed almost directly over us, headed toward Allouez Bay. After a while we spotted two Sabine’s as they swam with other gulls well off to the east of us, but it’s quite possible these were the same birds. 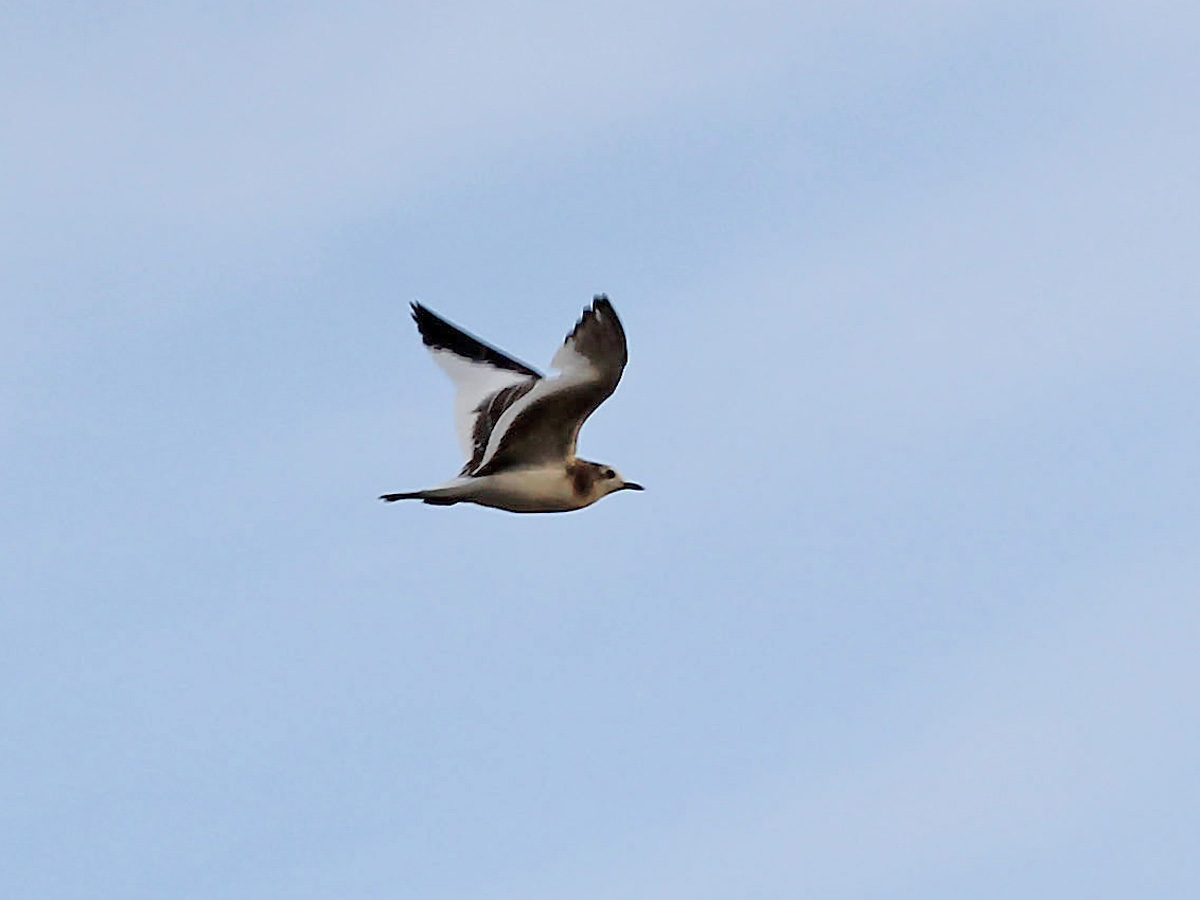 Sabine's Gull Wisconsin Point  Photo: Jeff Baughman
Two Harris’s Sparrows were found in the trees and bushes next to the boardwalk, and they subsequently flew to another patch of woods along the road. The beach quickly cleared, as birders rushed to look for them as they foraged in the weeds next to the road. 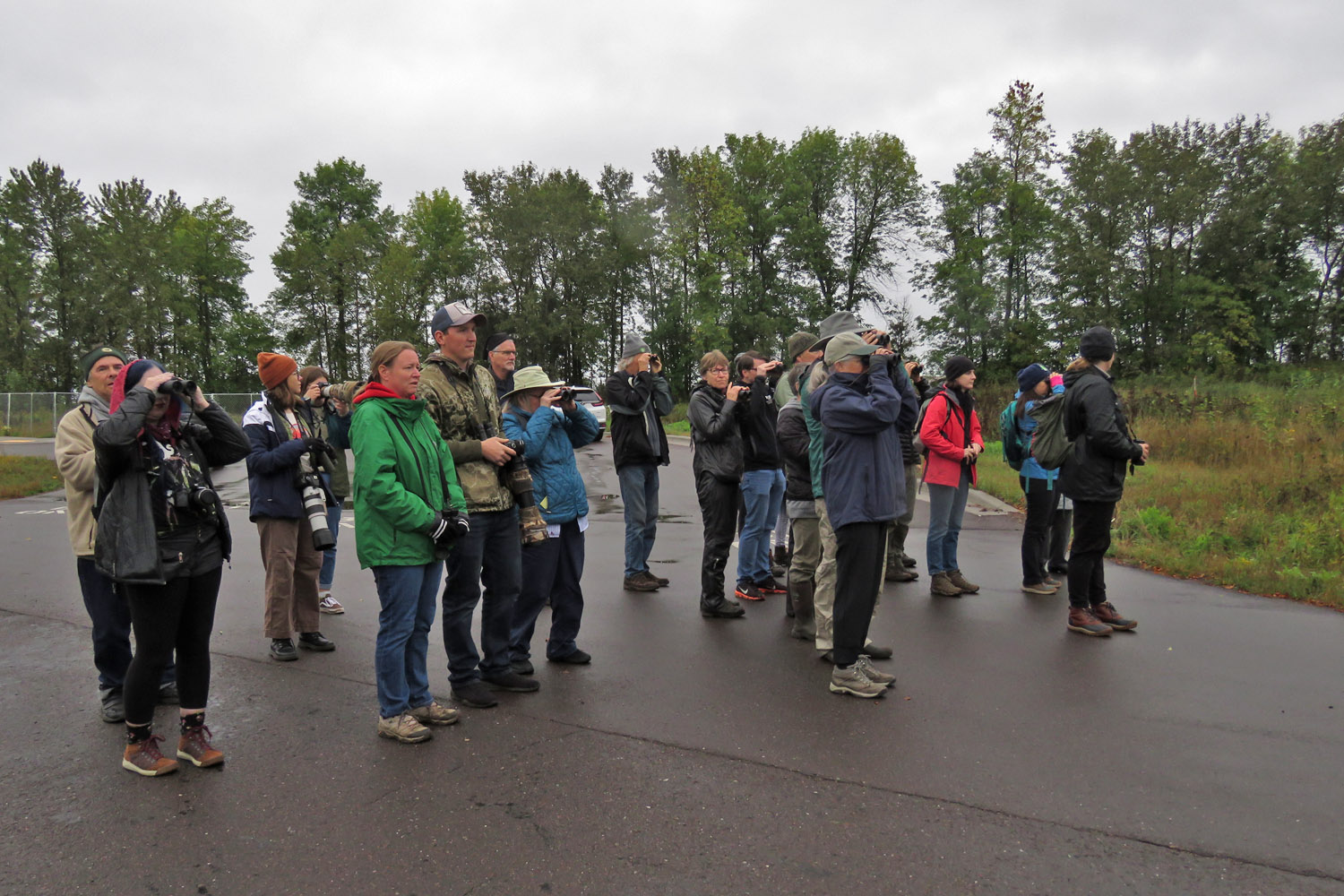 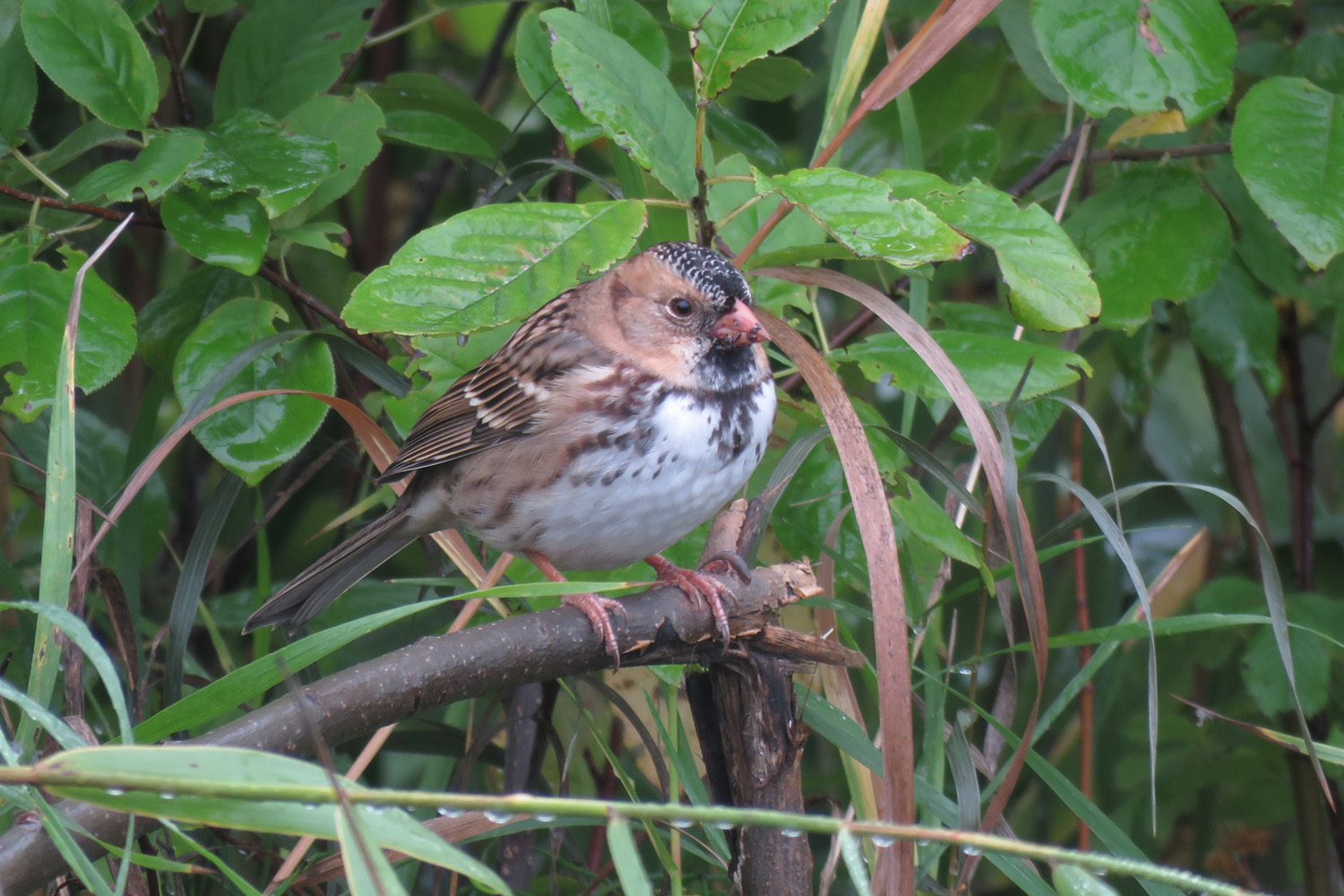 In the early afternoon we spotted another Sabine’s as it flew in from the north, and it provided a great observation opportunity–- especially for those who hadn’t been there for the earlier individuals.

Around 1:20 p.m., there was another surge of excitement when a Pacific Loon was spotted, sitting on the water. It was fairly distant but provided great scope views of the distinctive features – including its small bill and overall size, its long neck and rounded head, and the smooth demarcation line between its white throat and dark gray hindneck. On a few occasions a thin “chinstrap” also could be observed.

Unfortunately, this first day of Jaegerfest 2022 had been “jaegerless,” which disappointed many, so we were hopeful the next day would bring some in. The bird total for the day was around 60 species.

Saturday (Sept. 24) was quite cloudy, following overnight showers, and there were still a few sprinkles at times. Once again, the wind was from the south at 5 to 10 m.p.h., with the temperature from 52 to 56 degrees.

Red-winged Blackbirds and Swamp Sparrow were heard singing from the marsh across the road, and a few Cedar Waxwings were in the trees. A few ducks were present on Lake Superior, including Green-winged Teal, Northern Pintail, Mallard, Common Merganser and a group of four dark scoters that were either Surf or Black -- too far away to ID for certain.

Duck hunters were present on Allouez Bay, and we could see spreads of decoys and heard occasional shooting. On one occasion a Bald Eagle swooped in and picked up a Green-winged Teal they had shot, and we watched it fly off with the little duck in its talons! 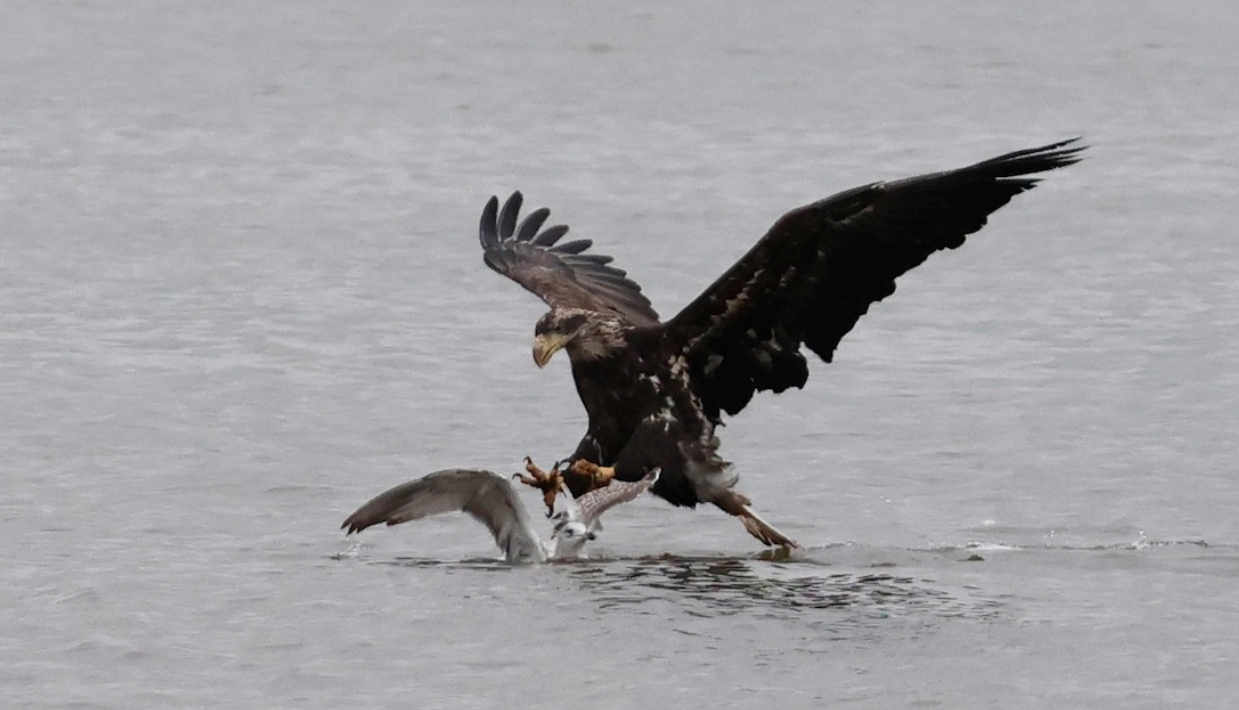 Bald Eagle Grabbing Ring-Billed Gull Photo: Ted Keyel
A little before 11, two adult Parasitic Jaegers finally were spotted sitting on the water well offshore. We enjoyed distant scope views before they took off and flew about.

On a side note: Birders who have attended Jaegerfest over the years are used to observing mostly juvenile jaegers, with some adults or sub-adults from time to time. For the past several years, however, there have not been many juveniles -– instead mainly older birds. We don’t know the reason for this change, but many of us are concerned that reproduction in their Arctic breeding areas may have declined. This would certainly be a depressing change, if it portends fewer jaegers in the future!

Around 12:15, a Franklin’s Gull was sighted. It flew about for a while but disappeared to the east. Fortunately, a second individual was spotted on the beach around 3:20, and it provided much better looks. We also were able to spot four different Lesser Black-backed Gulls on the water.

An intriguing gull was sighted on the lake, quite a distance out, but its pale wingtips and apparent dark eye drew attention. Fortunately, it was later spotted on the beach to the east of us, and we were able to get much better looks at what turned out to be a Glaucous-winged Gull! We were able to confirm that it had dark, beady eyes and gray on the wingtips, and a few photos were taken. What a treat to find this rare species, which might be only the 7th state record, if accepted! Unfortunately, the entire flock of gulls flushed after just a few minutes, so not everyone had a chance to view it.

A number of other waterbirds and passerines also were observed, and the day list totaled 55 species.

Sunday (Sept. 25) was once again cloudy, but the morning temperature was a little milder, at around 55. The wind had turned to the WNW at about 5 to 10 m.p.h.
Those of us on the beach early had a nice surprise when a Common Nighthawk flew right over us. This was an unusually late date for this species, so we were quite surprise 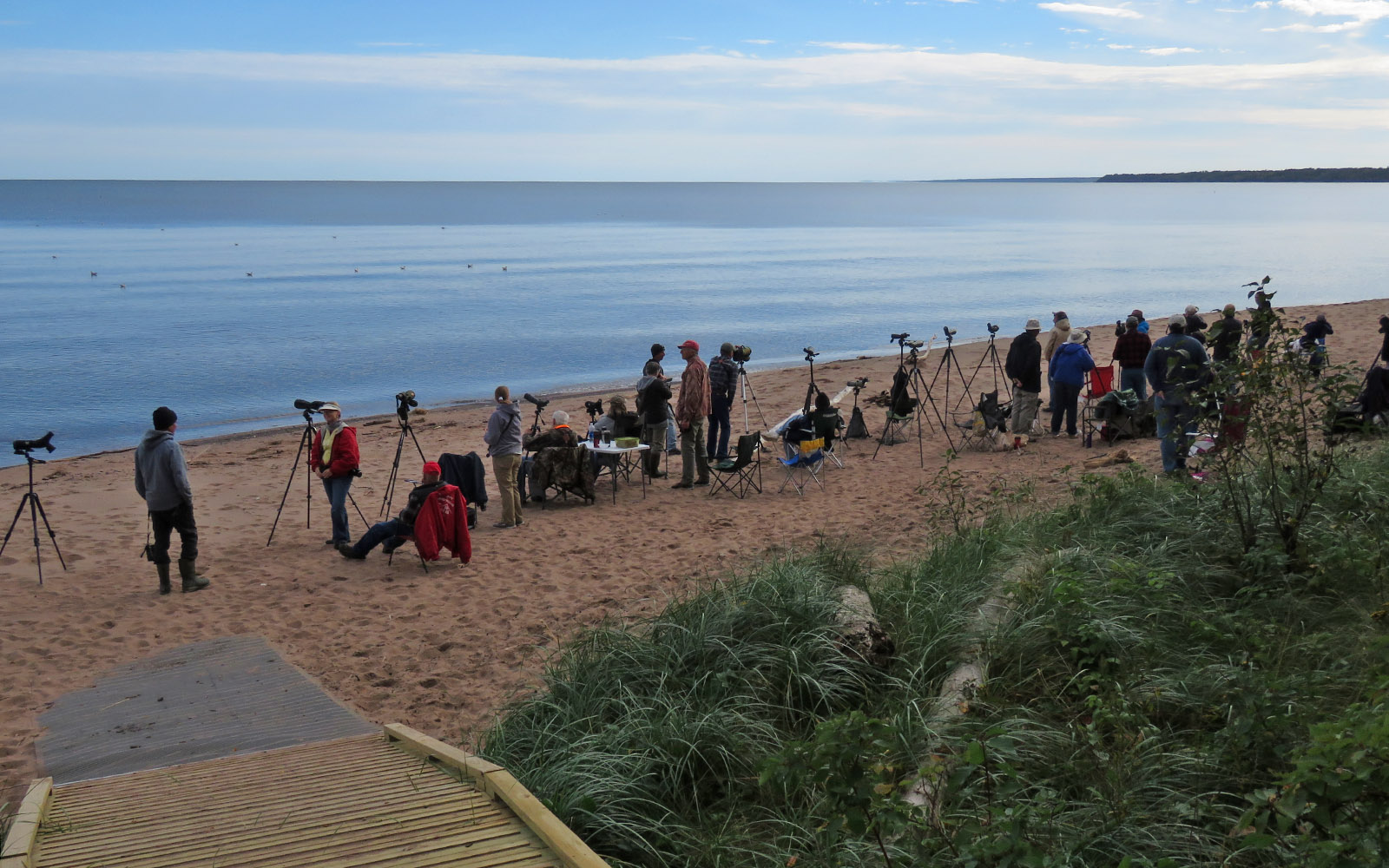 Birders on Beach at Wisconsin Point Jaegerfest Sept 23, 2022 Photo: Tom Schultz
We spotted a couple more adult Lesser Black-backed Gulls floating out on the lake, but then a little before 8 a.m. the Glaucous-winged Gull we’d seen on Saturday was relocated on the beach among other gulls. This time the bird remained in place for a longer time, allowing more birders to get a look at it and take photos.

A number of other species were spotted during the rest of the morning, including a Parasitic Jaeger seen in the far distance. Also observed were 15 Bonaparte’s Gulls, as well as three American Pipits, Sharp-shinned Hawk, American Kestrel, Merlin and Peregrine Falcon.

The cumulative morning bird list was 51, with most birders leaving the Point to head for home. As far as we could determine, the cumulative total for our three Jaegerfest days was 93 -- somewhat down from most years, likely due to how late the third weekend in September fell this year. It was still a fantastic event, with quite a few noteworthy birds and many opportunities for camaraderie among the estimated 80 birders on hand over the weekend.