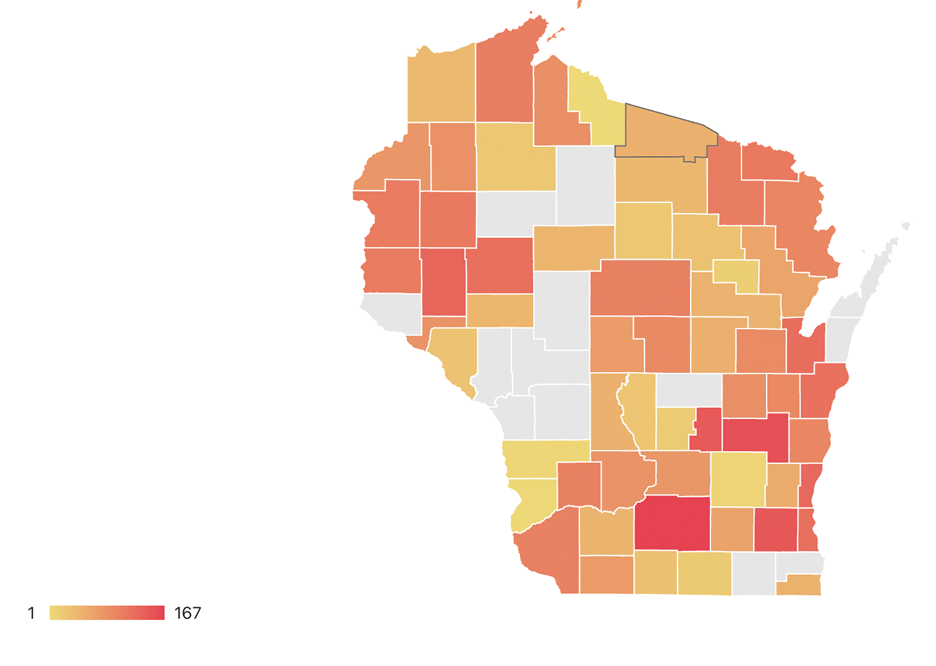 By Jennifer Lazewski
WSO Executive Director
The first Big Birding Bash was a resounding success as a spring migration bird counting effort with fun local gatherings of birders. On May 21-22, over 300 participants in 59 counties observed 244 bird species. This effort included birders through the state with eBird checklists done that weekend. We asked that everyone share their checklists with WSOBBB, and 635 checklists came in. Thank you for all the shared data contributing to a great community science activity! If you are curious to see the results on eBird, you can see the shared lists at

https://ebird.org/profile/MzE0MDg3OA/US-WI and the trip report with bird list at

The observations resulted from backyard, local, county-wide and cross-county birding. Jeff Baughman led several trips to bird all day Saturday. Another ambitious group traveled across the length of the state to as many birding hotspots possible. Other members targeted less-commonly birded areas to help expand our coverage. WSO provided some extra publicity for events submitted by our members. These 19 expeditions had over 100 participants visit more than 30 sites.

Our sightings included some interesting information. We counted over 50,000 individual birds. The Red-winged Blackbird has seemingly replaced the American Robin as the harbinger of spring with more sightings and more individuals seen. The Common Yellowthroat ranked among the top species sighted, more common than the Northern Cardinal. At the other end of the spectrum, 16 species appeared on only a single checklist and 27 species were seen only in a single county.

Since the event took place during spring migration, the bird family with the most species viewed was warblers with 33 species. The sandpiper family had 23 species observed, waterfowl 22 species, New World sparrows 16 species and gulls 12 species.

We covered a lot of time and distance during the Big Birding Bash. Most people started between 6 and 8 a.m. and observations came in as late as 10 p.m. with some night owls (human and bird). The checklists included 427 hours spent birding. For the 635 checklists, 383 were traveling (60%), 141 were stationary (22%), and 111 were casual observations (18%). Those submitting traveling checklists covered 515 miles with an average of about one hour, 1.4 miles and 20 species seen. 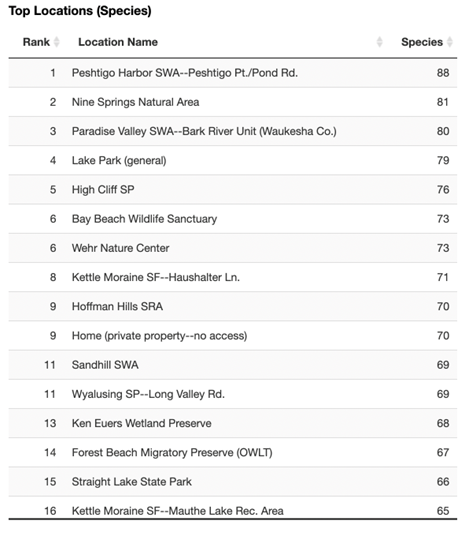 We birded in 59 of Wisconsin’s 72 counties. The species average was 71 per county. Sixteen counties had more than 100 species observed (see accompanying map). While six checklists came from a single location (where the American Avocet was sighted), three or less were submitted for most spots. The top 10 sites for number of species included some great natural areas, but also Lake Park and Wehr Nature Center in Milwaukee County (see accompanying chart). 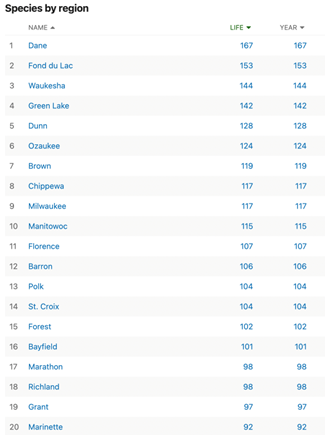 This great all-in effort from Wisconsin birders included many different trips, events and sightings. We appreciate everyone’s contributions during the weekend. It was wonderful to be out among our fellow enthusiasts, seeing new and exciting birds, meeting new people and generating excitement for birding. We’re looking forward to doing this again next May!