About 20 of us gathered at the Sheboygan Marina at 7:00 AM on Saturday, March 12 for what was supposed to be the first outing of Spring – but really felt more like a January field trip!  The temperature was only 7 degrees, and there was a stiff NW wind blowing.  Fortunately, the skies were clear and the sun was bright – but it sure didn’t seem to provide much warmth.

Most of the harbor was frozen, but there were areas of open water and a mixture of geese and ducks were present – including MALLARD, REDHEAD, GREATER SCAUP, COMMON GOLDENEYE, and a couple HOODED MERGANSERS.  The only other birds observed at the marina were a couple of COMMON GRACKLES.  After introductions and going through attendance, the group left around 7:20 and headed toward North Point.

Once there we parked and walked back along the lakefront to check the waterfowl that were present.  The main target species was HARLEQUIN DUCK, and after a bit of searching we were pleased to spot a couple of colorful males.  Other ducks present were MALLARD, BUFFLEHEAD, GREATER SCAUP and COMMON GOLDENEYES, along with another HOODED MERGANSER.  RING-BILLED and HERRING GULLS were also spotted, a couple of WILD TURKEYS, a RED-TAILED HAWK, and a lone RED-WINGED BLACKBIRD.

Our next destination was Sheboygan’s Indian Mound Park. On the way we made a brief stop at the power plant to hopefully spot a Peregrine Falcon – but we got shut out, and only managed to get a rear view of their nest box high atop the building.  After a short restroom stop we continued on to the park. Shortly after arriving a few WHITE-WINGED CROSSBILLS were spotted among the cones of a tall spruce, and scope views were obtained.  A number of other birds were observed or heard there, including BALD EAGLE, DOWNY WOODPECKER, AMERICAN CROW, BLACK-CAPPED CHICKADEE, WHITE-BREASTED NUTHATCH, PINE SISKIN and NORTHERN CARDINAL. Our target bird at this spot was GREAT TIT – and fortunately the group was able to get nice looks, and even got to hear this attractive yellow-breasted chickadee singing!  A bonus find was a GREAT HORNED OWL that flushed from its daytime roost. 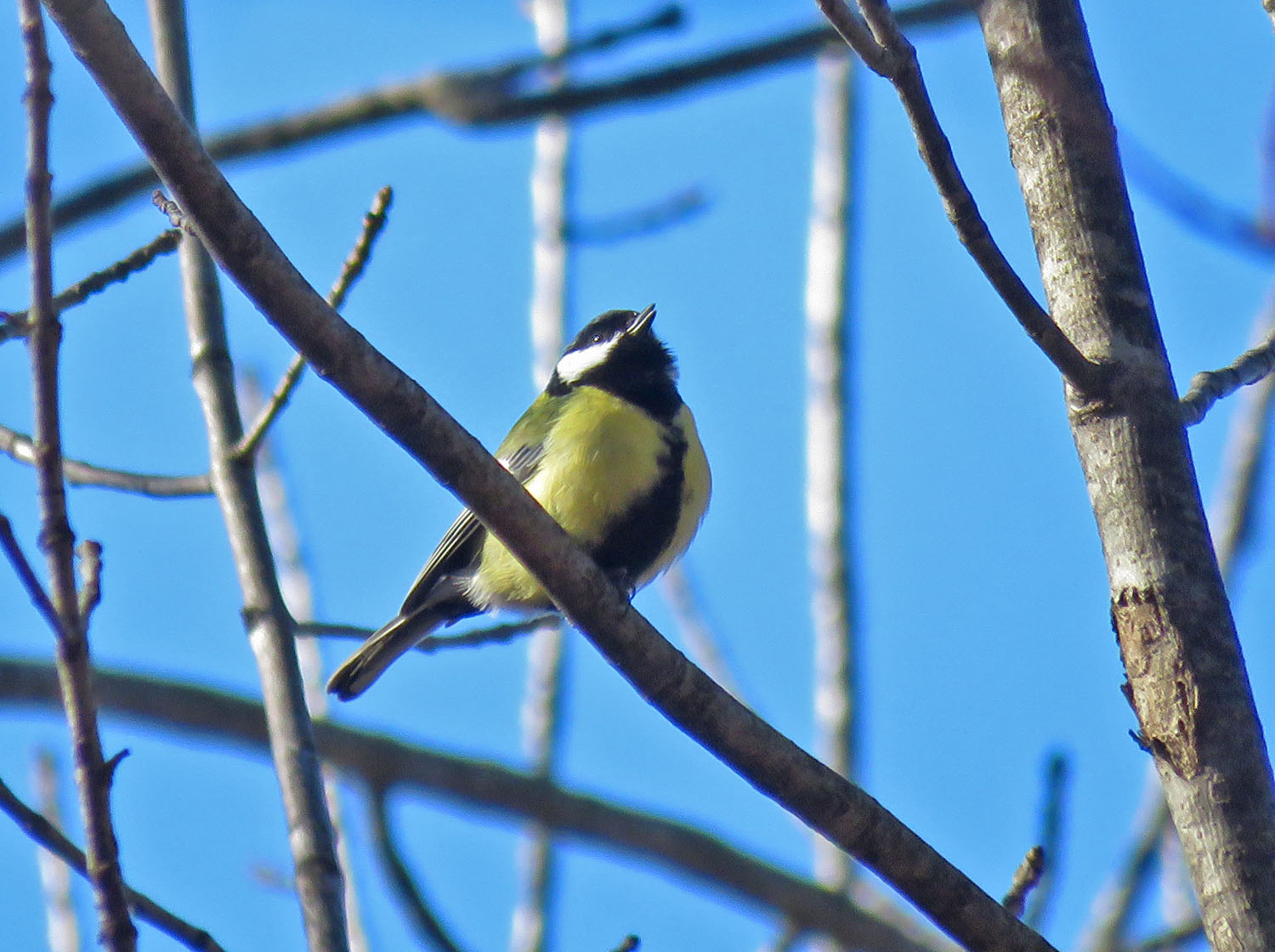 Around 9:00 we left Sheboygan and caravanned north toward Manitowoc.  We made a short stop at a park in Cleveland to view the chilly waters of Lake Michigan, which had rafts of thin ice floating about.  A nice flock of CANADA GEESE were loafing just offshore, and GREATER SCAUP and COMMON GOLDENEYE were also spotted, but a large raft of divers far to the south were not identifiable in the heat distortion rising from the water.  A pair of TRUMPETER/TUNDRA SWANS could be seen way off to the north.  We could see they had black bills, but we couldn’t determine which species they were in the shimmer.

Continuing on to Manitowoc, our next stop was a parking lot along the river (across from the Maritime Museum and the USS Cobia submarine).  A small group of HERRING GULLS was present, along with a few GREATER SCAUP and COMMON GOLDENEYE, and a BALD EAGLE flew over, but that was about it.  We next stopped near the SS Badger Dock.  A nice flock of HERRING GULLS were standing on the ice a fair distance away, but we could immediately see a GREAT BLACK-BACKED GULL standing among them.  Closer looks revealed the presence of at least three GLAUCOUS GULLS, as well as a few much-smaller RING-BILLED GULLS. 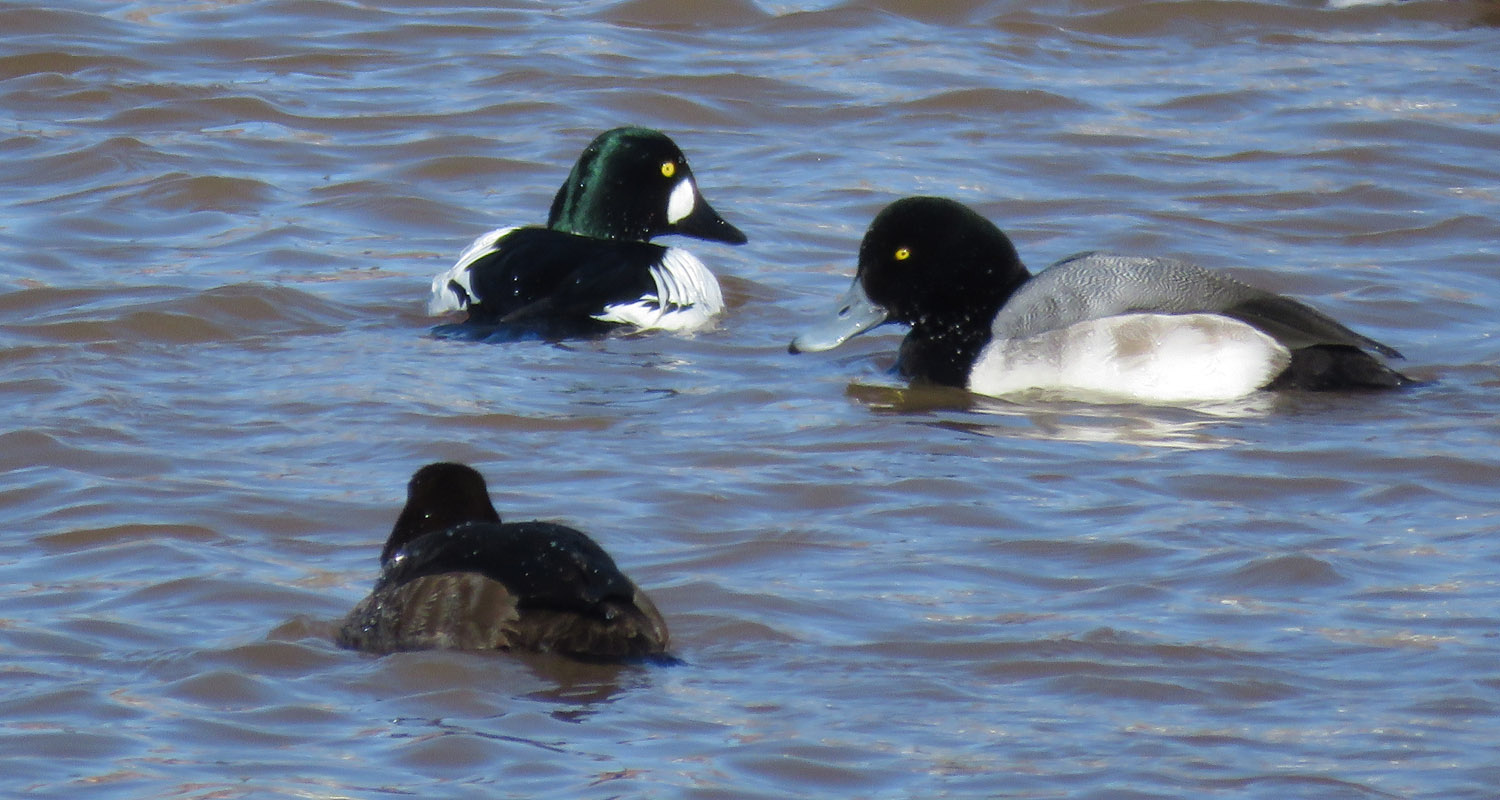 From there we continued north to Two Rivers, and eventually to the Susie Q Fish Market, where more gulls were standing on the ice of the mostly-frozen river.  A large, dark gray-mantled bird among them proved to be a HERRING X GREAT-BLACK-BACKED GULL hybrid (also known as a “Great Lakes Gull”).  We checked one final spot a bit further down the river, closer to Lake Michigan, had more HERRING GULLS and a lot more ducks – including AMERICAN BLACK DUCK, REDHEAD, and HOODED, RED-BREASTED and COMMON MERGANSERS, along with species we’d seen previously.  A KILLDEER and an AMERICAN KESTREL were also observed there.  We wrapped up the field trip a little before 11:30 AM, the temperature only up to about 12 degrees – with the continuing brisk NW wind making it feel even colder. 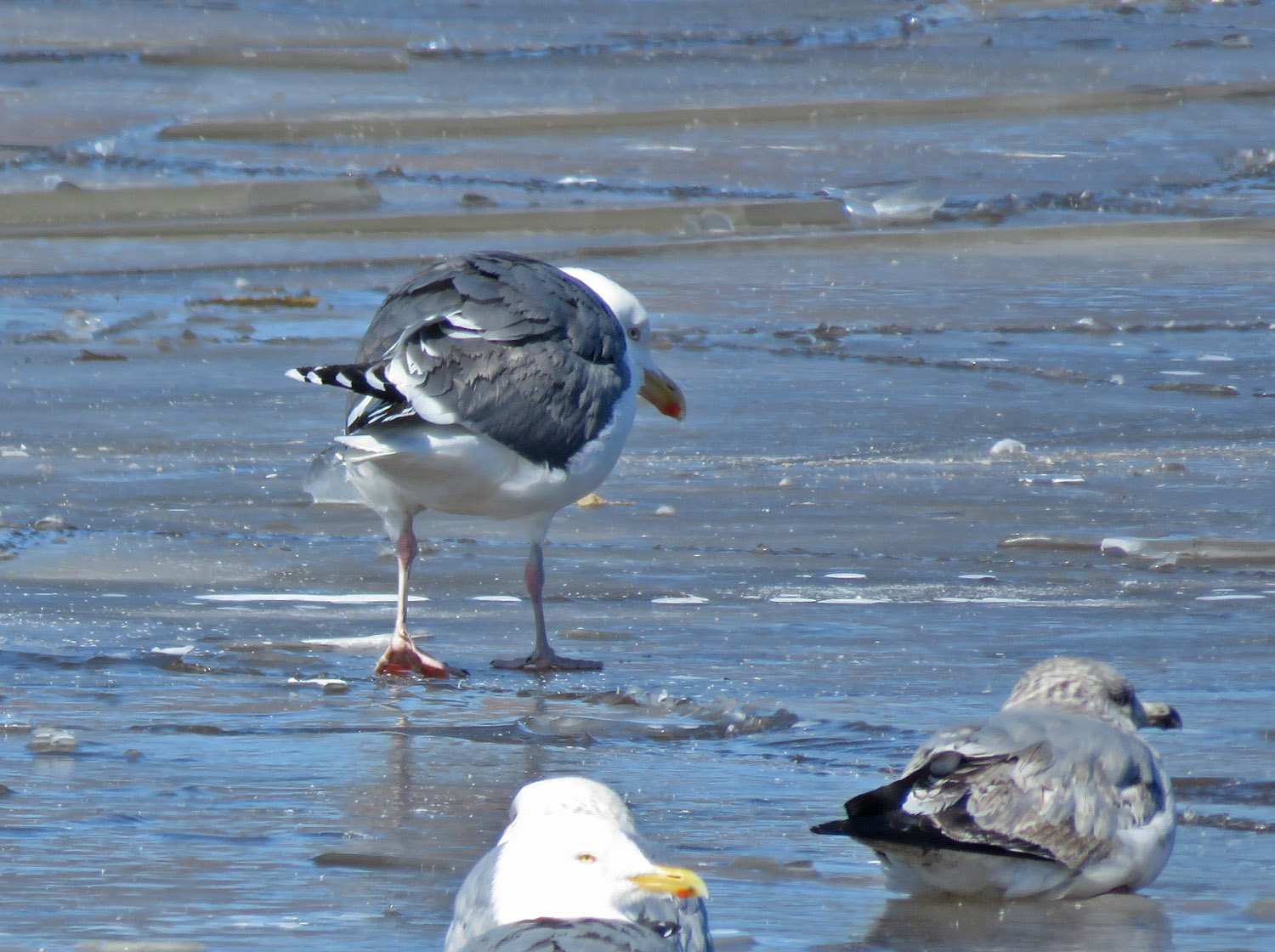 Thanks to all who attended, and to Jeff Baughman for co-leading this very wintry-feeling field trip!