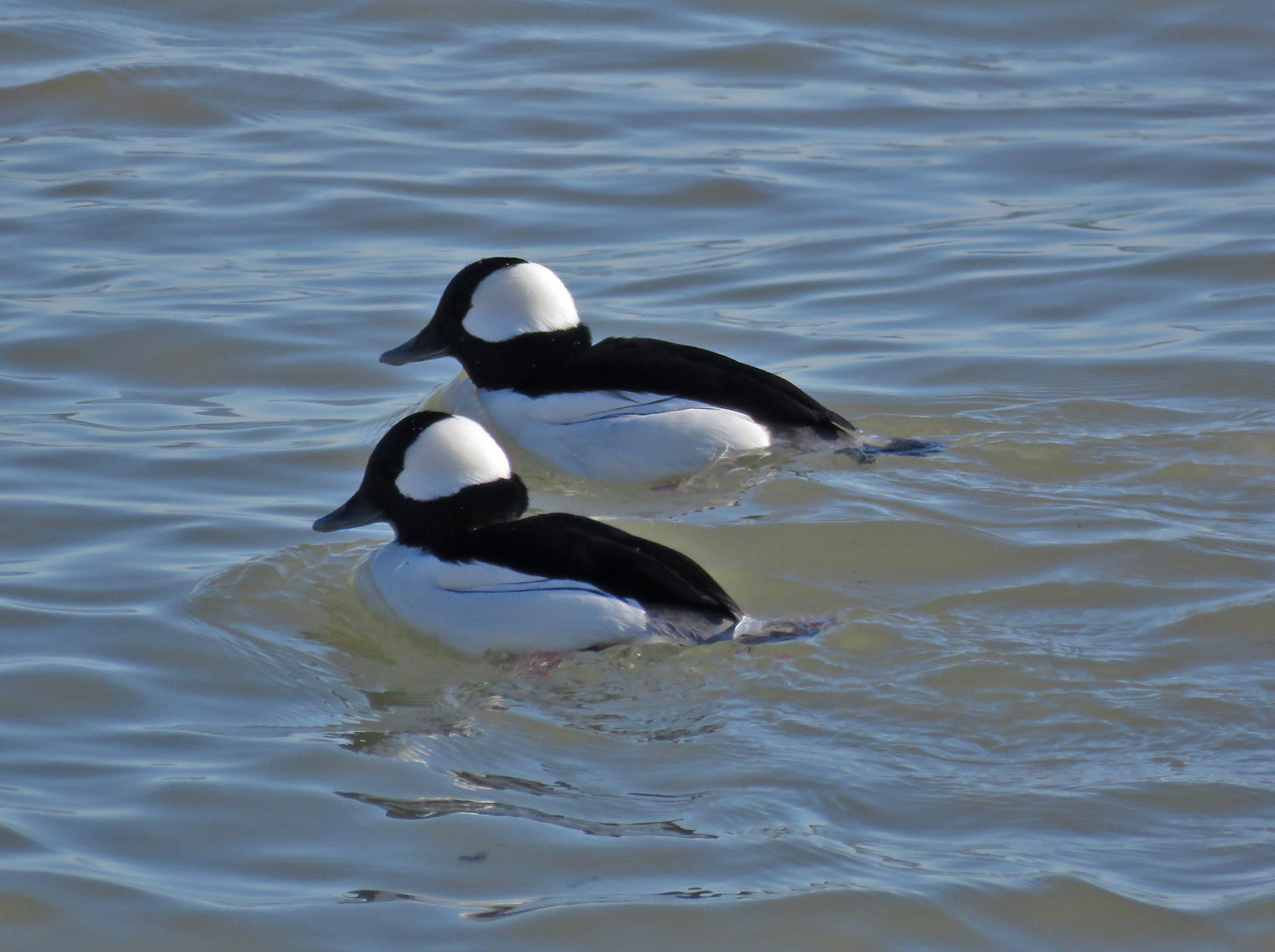 On Sunday, January 9, WSO held its first field trip of the year, with 27 birders gathering at South Shore Yacht Club at 8:00 AM.  Although the initial temperature was around 24 degrees, it felt much colder with a 15-25 mph NW wind ushering in a strong cold front.  The temperature fell through the morning, eventually dropping to 12 degrees, with the brutal wind continuing. 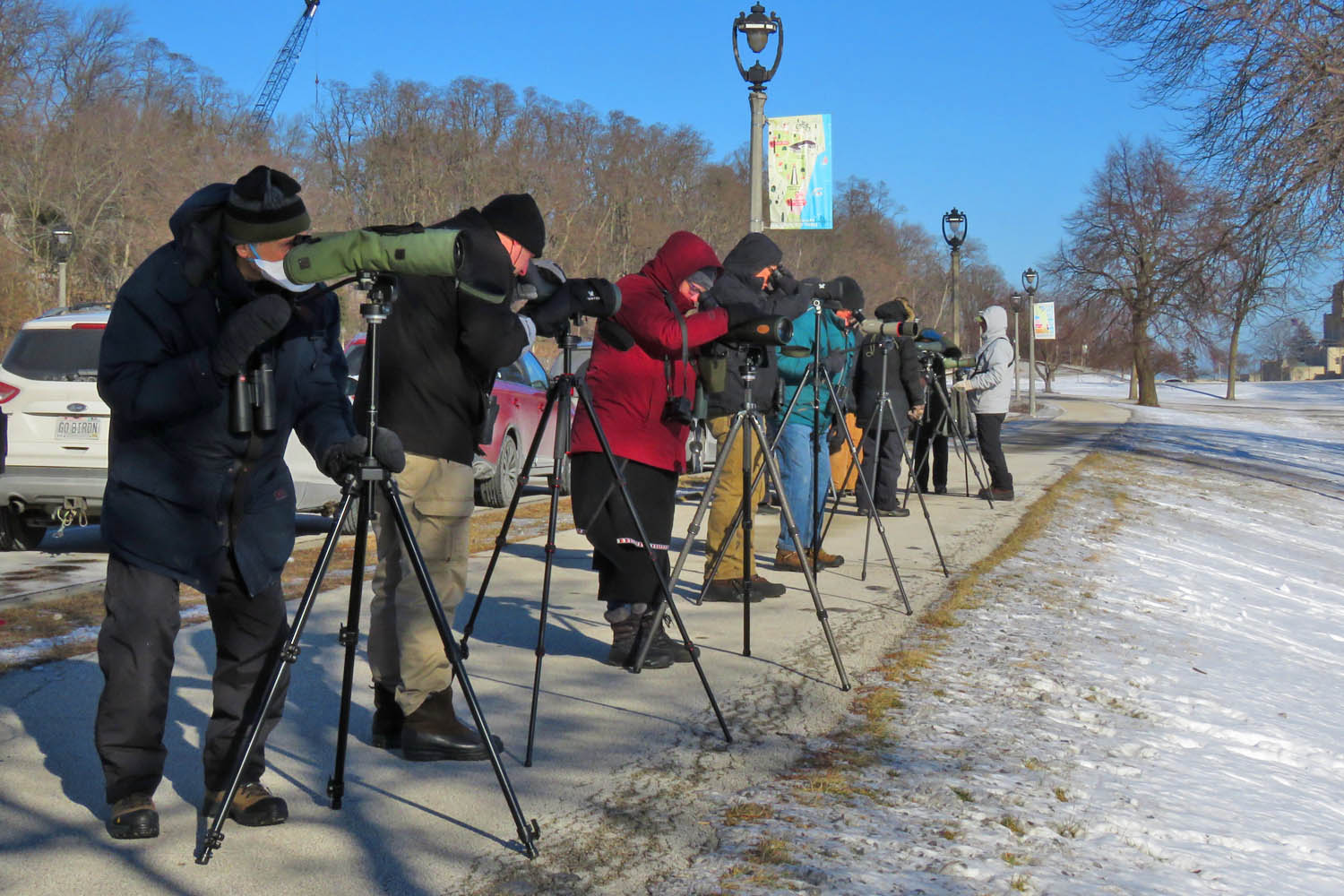 Upon arrival, greetings were exchanged and birders began scanning waters of the mostly open harbor.  A number of waterfowl were present, including CANADA GOOSE, MALLARD, AMERICAN BLACK DUCK, GREATER SCAUP, COMMON GOLDENEYE, RED-BREASTED MERGANSER, and a lone MUTE SWAN.  A few HERRING and RING-BILLED GULLS were also present, and a HORNED LARK called as it was flying over – and then it landed just to the south of us. 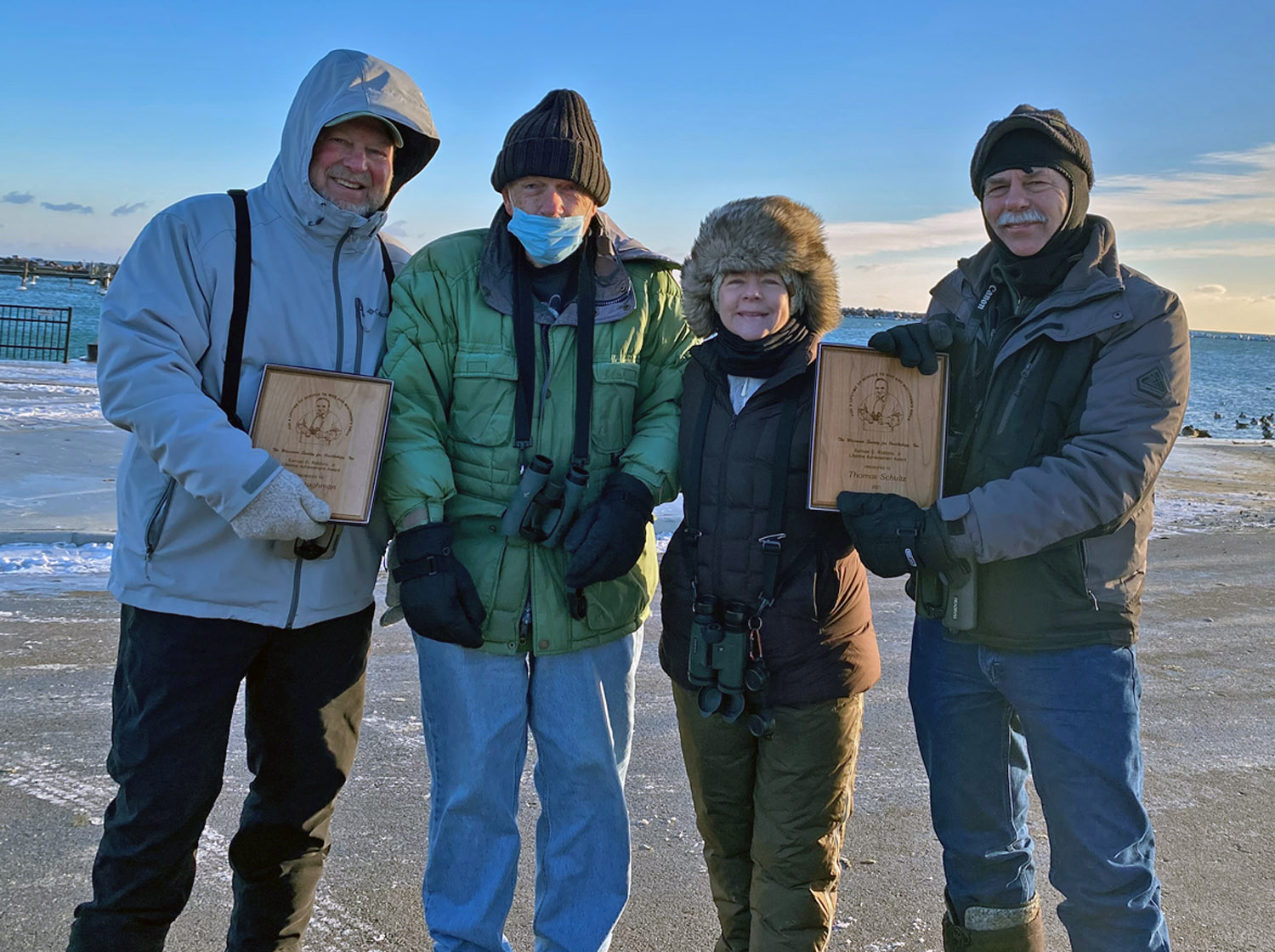 Before continuing on to our next birding stop, WSO Awards Chair Wendy Schultz took the opportunity to hand out a couple of special awards from 2021.  She explained that the cancellation of the convention last year had prevented the normal awards ceremony from occurring, and she thought this January field trip might provide a nice opportunity to make the presentation.She invited Daryl Tessen to assist in the brief ceremony, and she called Jeff Baughman and Tom Schultz forward to receive the prestigious Samuel D. Robbins Jr. Lifetime Achievement Award.  Jeff and Tom had served as co-chairs of the WSO Field Trips Committee for 34 years, starting in 1987 – and the board felt that this award was well deserved.  The top of the plaques reads: “FOR A LIFETIME OF SERVICE TO WSO AND WISCONSIN’S BIRDS.”  Wendy mentioned that further recognition of all the recent awardees would take place at the 2022 convention in Two Rivers.

The next destination for the field trip was the Lake Express Ferry Terminal, about a half mile to the north.  Some WATERFOWL were present, but the strong winds seemed to be preventing the normal gathering of gulls on the adjacent breakwalls. 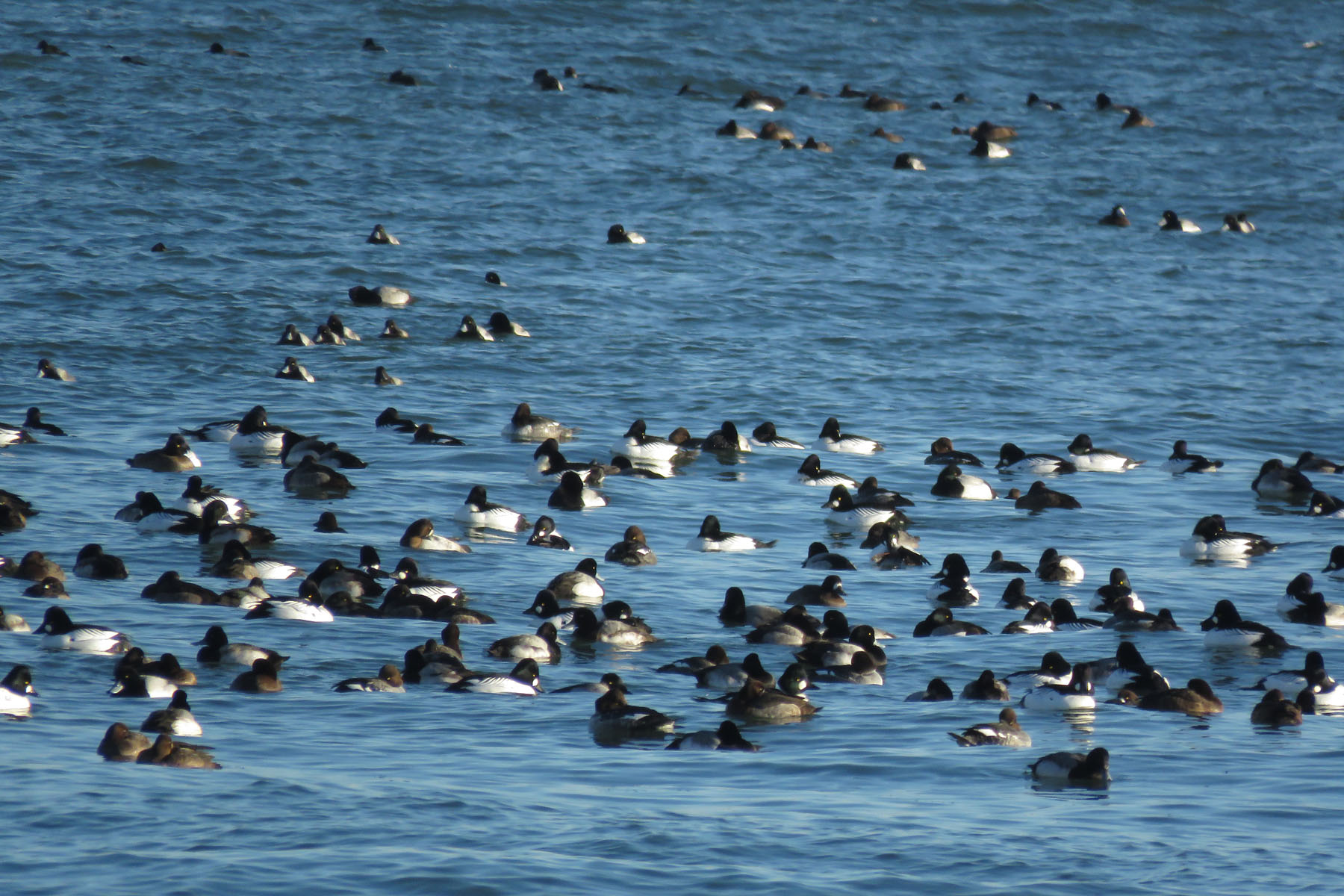 Continuing north, the group headed directly to the parking lot near the North Point Snack Bar and Bradford Beach.  We were hoping to find the rare PURPLE SANDPIPER and RUDDY TURNSTONE that had been present recently (including just the day before!), but unfortunately only the TURNSTONE was present.  We searched the area, including the McKinley Marina landing just to the south, but had no further luck in finding the rare sandpiper.  A couple of WHITE-WINGED SCOTERS were spotted swimming offshore near a flock of goldeneye, and a PEREGRINE FALCON was observed by a few lucky birders.

The group continued up Lincoln Memorial Drive to another overlook just north of Bradford Beach, and many more COMMON GOLDENEYE were present, along with a number of BUFFLEHEAD swimming just offshore.  A few other ducks were present also, and an AMERICAN ROBIN was spotted. 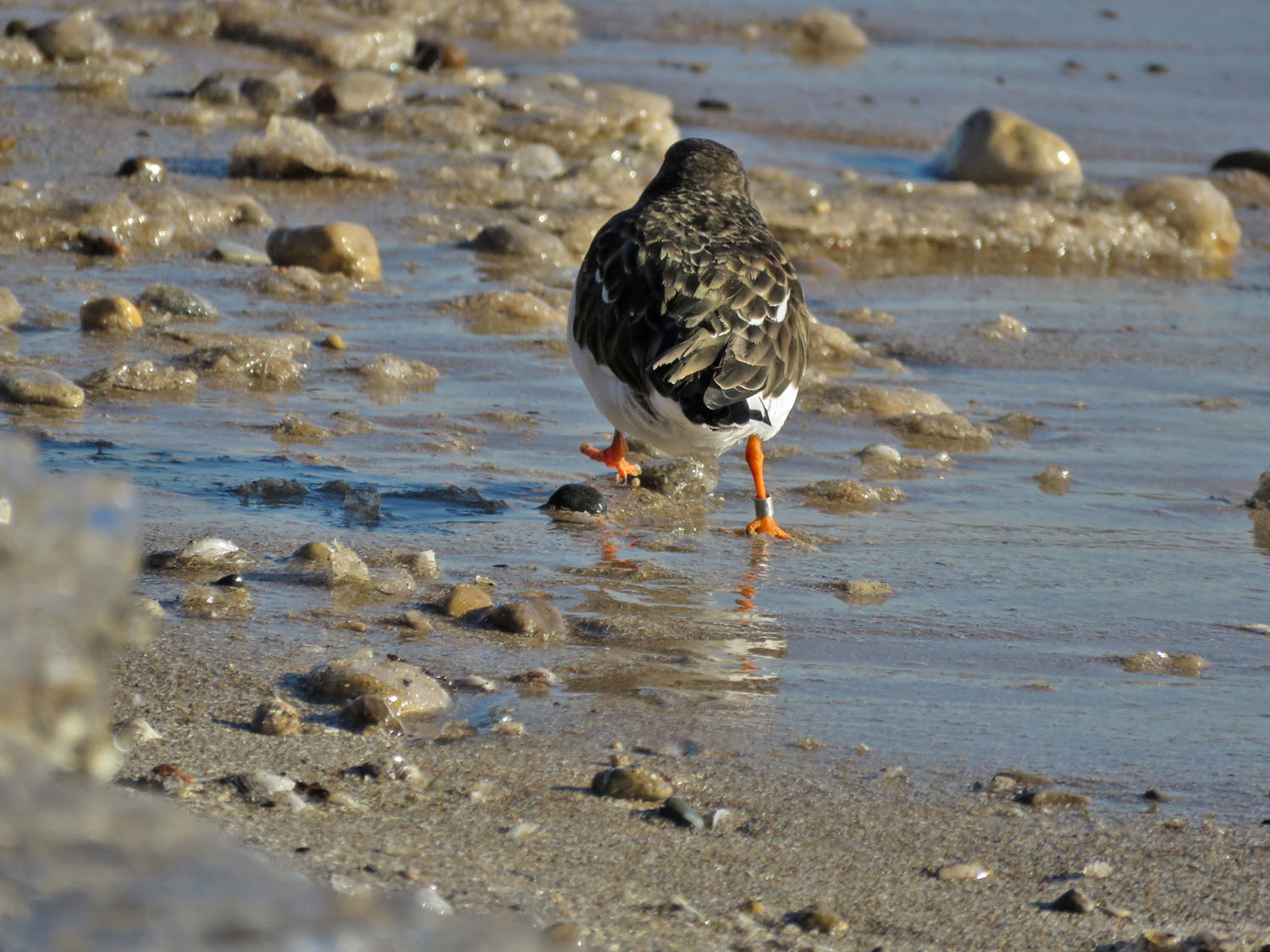 Our final birding spot was the Port Washington harbor – initially at Coal Dock Park, and then the north side of the marina.  Large numbers of CANADA GEESE were present there, and a variety of ducks – including MALLARD, BLACK DUCK, GREATER and LESSER SCAUP, a REDHEAD, BUFFLEHEAD, COMMON GOLDENEYE, and COMMON and RED-BREASTED MERGANSERS.  About 16 HERRING GULLS and a few RING-BILLED were also present and hunkered down in the strong wind – but that was about it.  We wrapped up the field trip around noon, with the temperature hovering around 12 degrees.  Thanks to Jeff Baughman for co-leading this field trip!