For a morning in mid-March, it sure seemed chilly! The temperature started about 18 degrees, with a moderate wind blowing, but at least it was sunny. About 25 birders showed up at the Sheboygan Marina, our gathering point, but there weren’t many birds present so we soon moved over to the North Point area.

Two Harlequin Ducks (female-type plumage) had been present here in recent days, and we found them fairly quickly. The two individuals were often swimming side-by-side, and were initially not far from shore so we had good looks. There were good-sized waves rolling in, however, and they were diving frequently – so at times it was difficult to keep them in view.

Another interesting duck in view was a Long-tailed, which was swimming with a small flock of Common Goldeneyes. A few Greater Scaup and Red-breasted Mergansers were also present. Some in the group had observed one or two Glaucous Gulls initially, but they apparently had flown off because we couldn’t relocate them among the many Herring Gulls out on the lake. 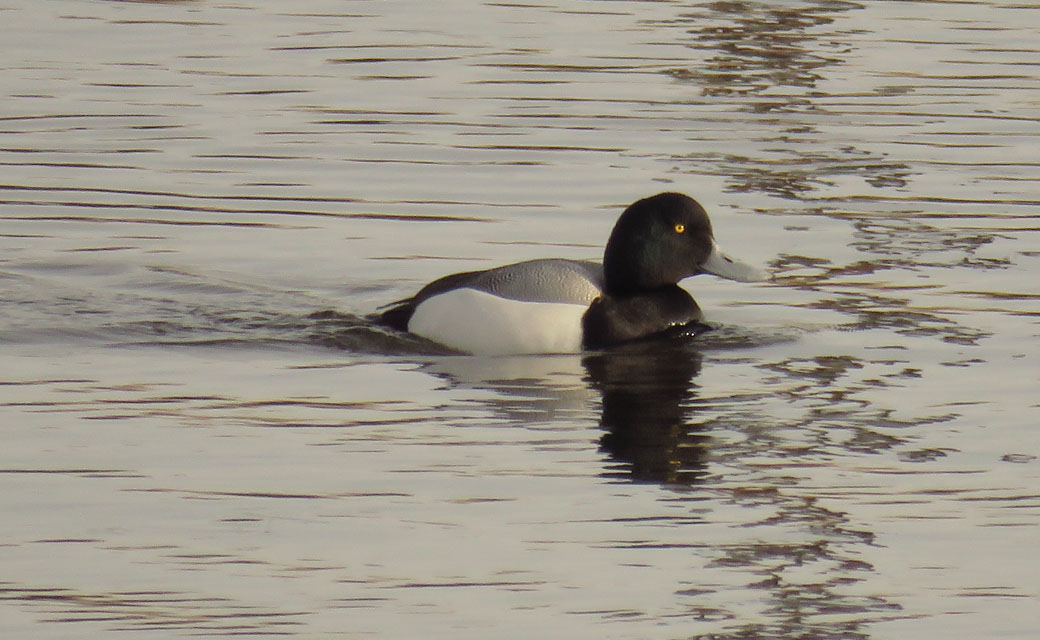 Our next stop was near the mouth of the river, near Blue Harbor Resort. A decent number of Greater Scaup were present there, along with a few Lessers. Both Red-breasted and Common Mergansers were spotted, along with some Redheads and Hooded Mergansers. The highlight there, however, was a female White-winged Scoter that was swimming out toward the breakwater.

From there we took Hwy. 28 to the Greenwing Retention Ponds. There were many Canada Geese and other waterfowl present as we arrived, but many of them took flight before we could get close. I think the only birds remaining were Mallards, a few Canadas, and a Lesser Scaup. Next was a stop at the Behrens Parkway Ponds, where many more Canada Geese were present, and we managed to find one Cackling Goose among them. The only ducks there were Mallard, Ring-necked, Lesser Scaup and Bufflehead.

We next made a stop at Indian Mound Park, due to the fact that Great Tits were sometimes observed in that area – often visiting the bird feeders of a neighbor. It took a while, but eventually a couple of them were spotted, and the group hustled over to try to get looks. The two tits were moving about between various trees in the park, so it was difficult for many in the group to get a look. Other woodland birds present were Red-bellied, Hairy and Pileated Woodpeckers, along with White-breasted Nuthatch, Northern Cardinal, American Crow, and Black-capped Chickadee. 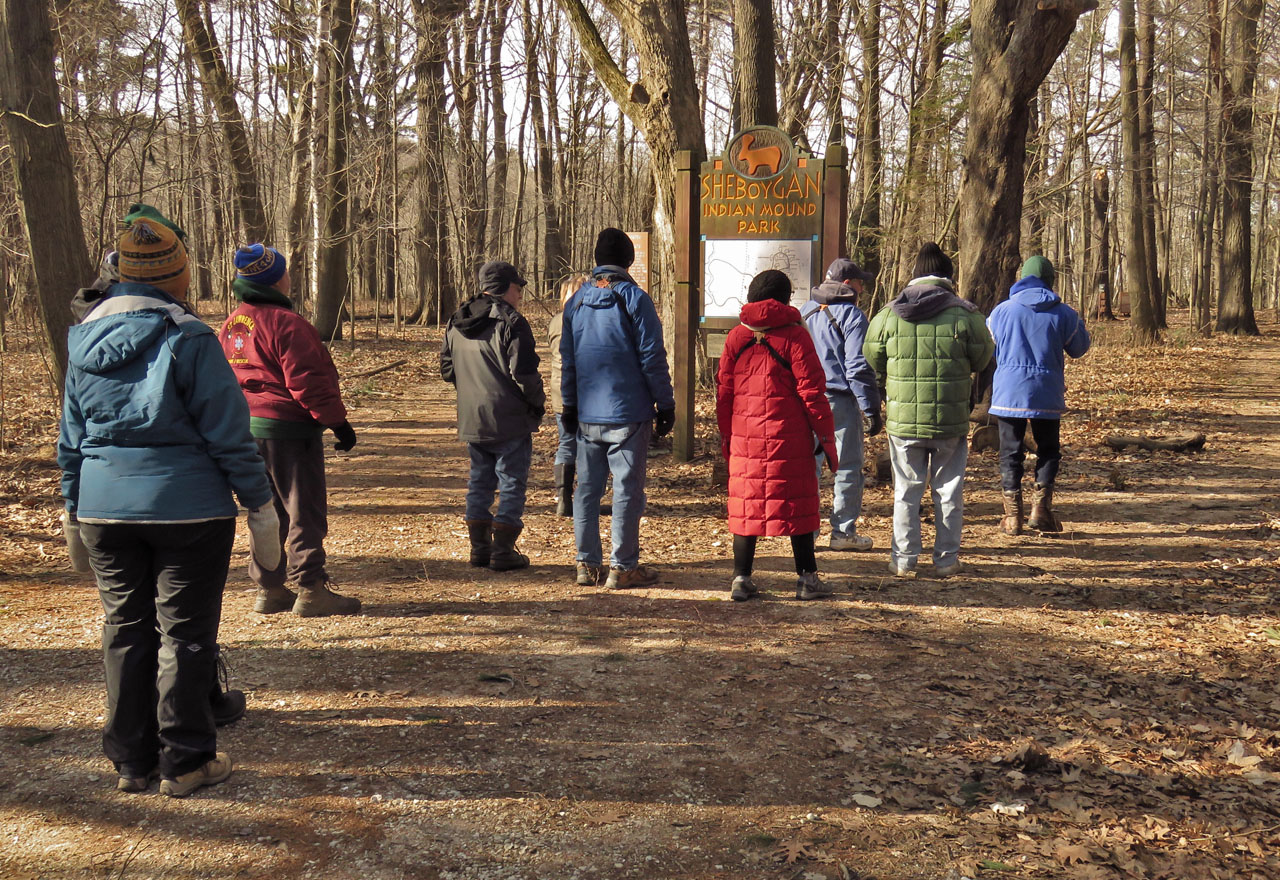 The group then headed over to Kohler-Andrea State Park, where we went inside the visitor center and checked the bird feeders – hoping for another look at Great Tit. Unfortunately that was unsuccessful, but we did find some Red-breasted Nuthatch, American Tree Sparrow, and a few other birds.

From there the plan was to check Six Mile Road, but somehow the group got separated along the way. Before we could re-connect, we suddenly got an excited message that a Cinnamon Teal had been spotted along Hwy KW in southern Sheboygan County, so the rest of us hurried to that location. A nice assortment of Tundra Swans, Snow Geese , and a Ross’s Goose that had been present at this pond initially took flight, unfortunately, so only the initial group of birders was able to see them.

The Cinnamon Teal was difficult to find at first by the late arriving members of the group, but eventually it swam into view from behind some flooded trees. It appeared to be associating with a Blue-winged Teal, and Northern Shovelers, Green-winged Teal, Ring-necked Ducks and a few others were also present. The pond was fairly distant, and with heat rising from the field in front of use, the viewing conditions were not ideal, but this small, dark-cinnamon-colored duck stood out fairly well – and eventually everyone was able to get looks. There was certainly great excitement expressed by all! (Note: During subsequent days other birders were able to get somewhat better views and photos of this bird, and fieldmarks were noted that showed that the “Cinnamon Tea” here was actually a Cinnamon X Blue-winged Teal hybrid!).

Our next stop was at the east end of Hwy. D, just north of Harrington Beach State Park, where the road dead-ends at Lake Michigan. Not many birds were in view there, unfortunately, and just a few Common and Red-breasted Mergansers, a Greater Scaup, three Redheads and a couple of Redheads were spotted.

From there the remaining members of the group headed south to Port Washington, where the harbor area (including Coal Dock Park) was fairly quiet and we didn't add in new birds here.

At this point, we were going to end the trip but decided to check the Peregrine nest box on the south side of the power plant at the South Beach parking area. Good thing we did! The female was in the box and eventually, the male flew in and sat on the southwest corner of the plant, giving us all great looks. One of the field trip participants made the comment that she really want to see a Red-throated Loon. It would be a lifer for her. So, we started scanning the lake, and within a couple of minutes, I had one in my bins not too far from shore. It was diving pretty regularly but we got it in our scopes for everyone to see. We also had a couple of Surf Scoters fly by and land, but they were more difficult to pin down because of the heavy wave action and the fact they were also diving. We also added a Song Sparrow working the shrubs along the beach here.