The Big Green Birding Year – BIGBY – has become my preferred method of birding for the last four years. And 2016 was a particularly good year, thanks to my birding friends, especially members of the Northeast Wisconsin Birding Club, and to my experiences in previous years, iPhones, Facebook pages, good weather at important times and good fortune. And the BIGBY page on the WSO website kept up interest levels and communication through the year.

I’d like to review some of my adventures and misadventures, starting in my own backyard, favorably located just four blocks from downtown Appleton near the Fox River. My 2016 Yard List was 132 species -- all BIGBY qualifiers. I have Fox River “flyovers” plus birds attracted by decades of birdscaping and an excellent water feature. The list includes Glaucous Gull, Yellow-billed Cuckoo, Olive-sided, Yellow-bellied and Acadian Flycatchers, five vireos, all the swallows and 23 warbler species.

My most vivid yard memory is the Yellow-throated Warbler that I did not see: several club members birded my yard while I was troutfishing in the Driftless Area for three days in May. Before leaving, I told Stuart Malcolm, one of the birders, NOT to find a Connecticut Warbler. He obliged (along with Michael Gray, Vicki Buchman and Lynn Koss). I received a text message: “No Connecticut Warbler, but we did have Yellow-throated Warbler…….seriously.”

I never did get the warbler.

The Harris’s Sparrow was an excellent BIGBY adventure. Thanks to Dar Tiede, our Christmas Bird Count coordinator who was emailed by a CBC participant in late October that her brother, Gene, possibly had a Harris’s Sparrow in his yard in Neenah. Dar confirmed the sighting and notified some area birders. I called Gene to set up a time for viewing – told him I’d be arriving in cycling gear, at which point he said, “You don’t have to ride a bike, I’ll drive over and pick you up.” 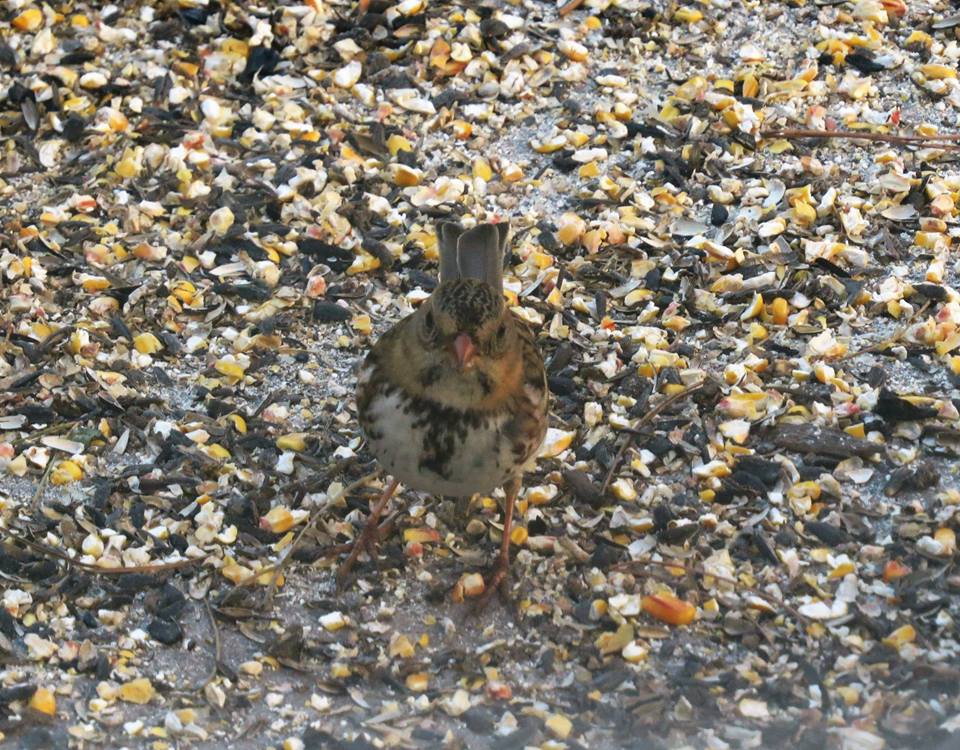 Gene’s yard was about 15x20 feet and could only be viewed through his bedroom window, where I sat, and eight minutes later the sparrow appeared. This was a minor triumph considering the eight unsuccessful rides, each a 12-mile roundtrip, to Bubolz Nature Center for an overwintering Harris’s Sparrow earlier in the year.

The greater adventures begin beyond the Patch. Each BIGBY year, I’ve covered the Buena Vista Grasslands to the Sheboygan Lakefront and much in between. My cabin near Hartmann’s Creek State Park serves as a base of operations in that area; Buena Vista is a 25-mile ride and usually I can pick up my target birds: Brewer’s Blackbird, Grasshopper Sparrow, Common Raven, Western Meadowlark and Upland Sandpiper. My luck with Prairie Chicken has been poor, but a Northern Mockingbird (confirmed breeding) was a total stroke of good luck. 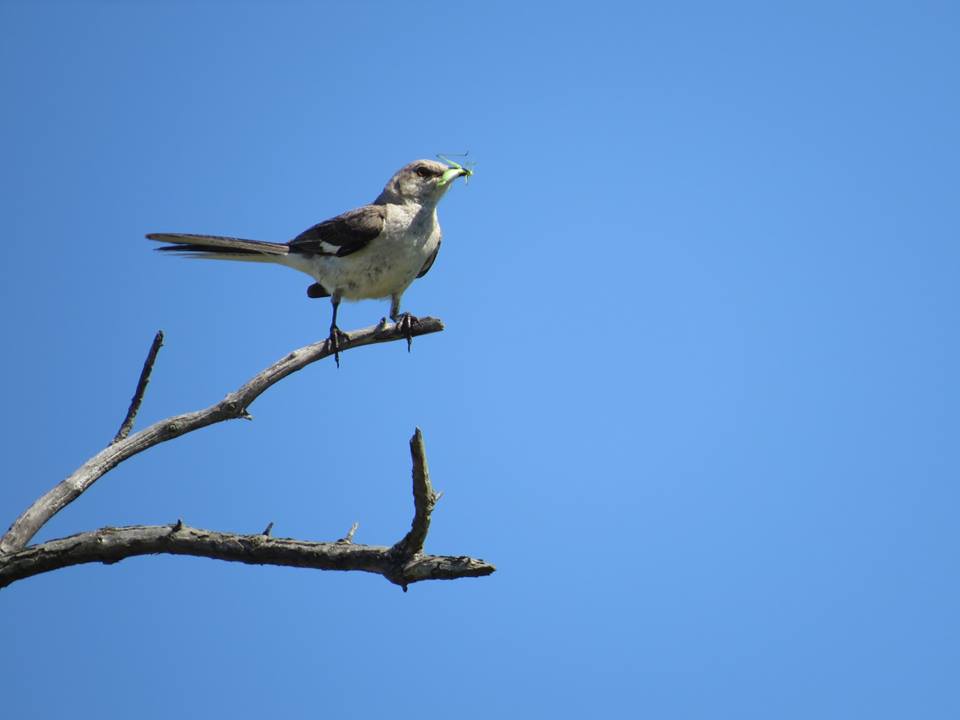 My base of operations for the Sheboygan lakefront and Northern Kettle Moraine State Forest is my sister-in-law’s farmette adjoining the Sheboygan Marsh State Wildlife Area near Greenbush. Early last June, the lakefront produced Little, Lesser Black-backed, Bonaparte’s and Franklin’s Gulls along with Common Tern, and the following day, in the Kettle Moraine, I added Hooded and Cerulean Warblers plus Henslow’s Sparrow. On my ride home from Greenbush, I added American Bittern at dawn in the Marytown Marsh, then Dickcissel in the surrounding agricultural fields. Nice trip, indeed.

I had several excellent day trips: a couple of rides to Mack State Wildlife Area near Shiocton, one in April another in June. The April trip was mainly for Red-headed Woodpecker at the Herb Behnke Unit of the Wolf River Bottoms IBA. Got the woodpecker, and then picked up Trumpeter Swan at Mack. The June trip was combined with a stop at Mosquito Hill Nature Center for Prothonotary Warbler, then a hop over to Mack for Black Tern, Yellow-headed Blackbird and, one of my most uplifting sightings: Least Bittern – a three-year BIBGY nemesis.

My favorite day trip of the year was to Killsnake State Wildlife Area for Short-eared Owl on Nov. 14. I left home at 1 p.m. and arrived at 3:40, hoping that my wait for the owl would be short. Five minutes later, two owls appeared, very close. I had a couple of hours riding in the dark on the way home, but a gorgeous sunset was followed by rise of the “super-moon” in the east. A “cycling high.”

I’ve been asked about my equipment: mountain bike for sloppy urban riding, two touring bikes, each with fenders, rack, rear panniers for scope/tripod, one for fair weather long-distance rides and an older bike for less than ideal conditions, and one good road bike for efficient long rides when I’m not taking the scope and tripod.

Compact Zeiss 10x25 binoculars have proven excellent. Kowa Prominar TSN 824M flourite scope with Manfrotto 190 compact tripod. The Canon SX50 HS camera fits easily in a handlebar bag or fanny pack. I try to photograph as many BIGBY birds as I can. Two Planet Bike “Blaze” front headlamps and “Superflash” taillights for dark riding. And always A helmet with mirror.

I ended up with 243 species, 2,645 miles on the bike and the best of adventures and memories. 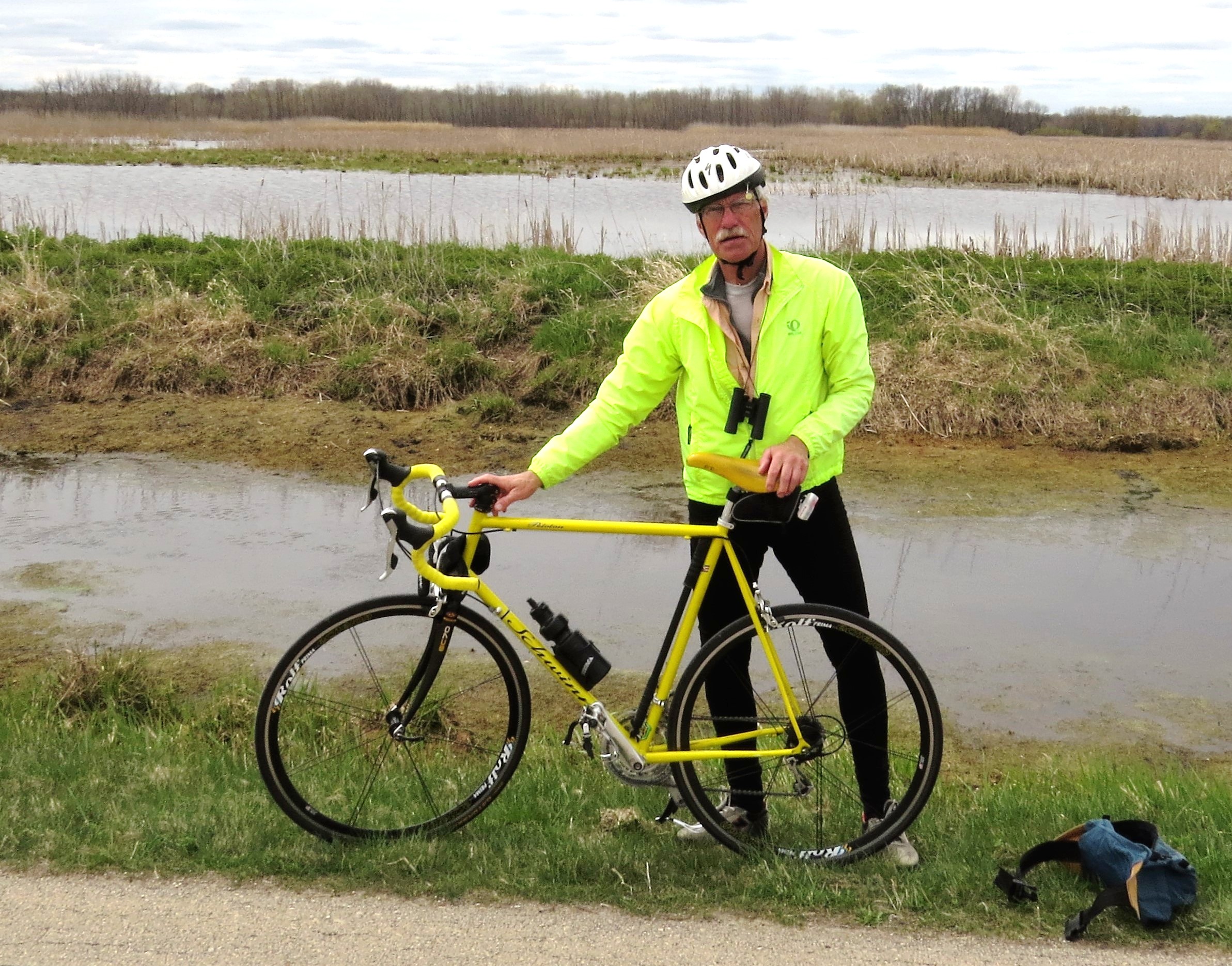