The sunshine was bright, but the temperature was bitterly cold (0 degrees) – and a brisk west wind added to the chill. Despite the cold, close to 40 hardcore birders showed up at South Shore Yacht Club as we gathered for our first field trip of the year. Unfortunately, the very cold weather of the past several days had completely frozen the entire harbor area, and the only waterfowl hanging out were a group of Canada Geese that were huddled up on the ice. An adult Cooper’s Hawk was perched in a large nearby spruce – the first of the year for many attendees!

From there the group headed down to an area near the mouth of the Milwaukee River (which was also entirely frozen, including the harbor), where an adult Lesser Black-backed Gull had been spotted about an hour earlier during scouting. Unfortunately he had departed prior to our arrival, and all that was left was a large flock of Herring Gulls.

The next stop was further north at the North Point Snack Bar. Lake Michigan was still largely open, but there we many ice floes scattered about, and the ducks (mostly Common Goldeneye) were fairly far offshore. We could see large flocks of ducks further north, so we drove up to North Point for a better look. More Common Goldeneye were present, but even more numerous were large groups of Greater Scaup, with a few Lesser Scaup and a couple of Redheads mixed in. It was interesting to see their behavior as they swam about through the ice floes – forming long, single-file lines that apparently made it easier to get through the floating ice patches. The highlight there was spotting a Long-tailed Duck that was swimming and diving in front of the other birds, and there were a couple dozen or so Buffleheads here and there also – as well as Red-breasted Mergansers and Herring Gulls.

The group’s next destination was the Port Washington Harbor, with an initial stop at Coal Dock Park. With the fishing channel having open water, in addition to the standard species we had already found, we added singles of Ring-necked Duck, American Coot, and a nice male Green-winged Teal.

We then moved over to the Marina parking area, to check out the waterbirds that were hanging out between the docks, between which the water was mostly frozen. Sitting on the ice were good-sized groups of Canada Geese, but we carefully picked out a few interesting birds among them, including two Greater White-fronted Geese and a Ross’s Goose – both quite unexpected at this time of year! Other highlights included two Cackling Geese, a Northern Pintail, a couple of American Black Ducks, and an adult Great Black-backed Gull. 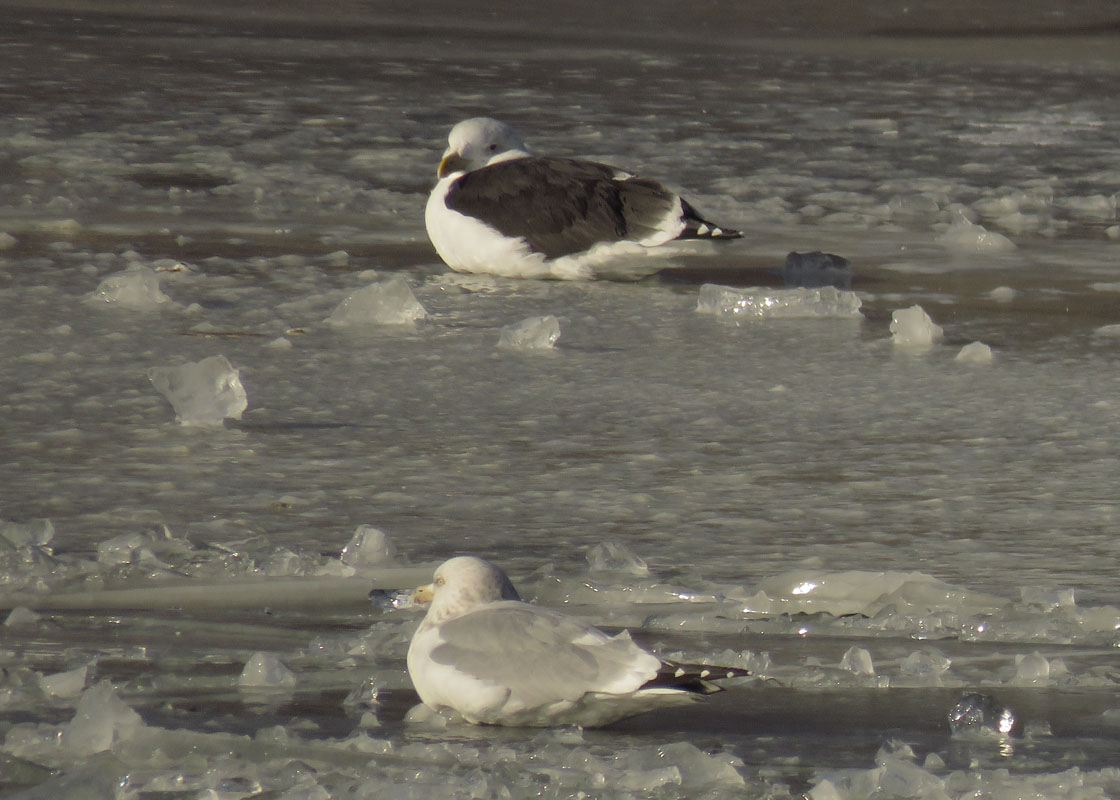 Our final stops for the day were at Sheboygan’s lakefront, where the Sheboygan River was mostly solid ice. Sitting among the Herring Gulls there was another Great Black-backed Gull. Moving to North Point for a final stop, the remaining members of the group found an adult Glaucous Gull and a lone Ring-billed.

Thanks to everyone who braved the cold to participate in this field trip, and to Jeff Baughman for co-leading.